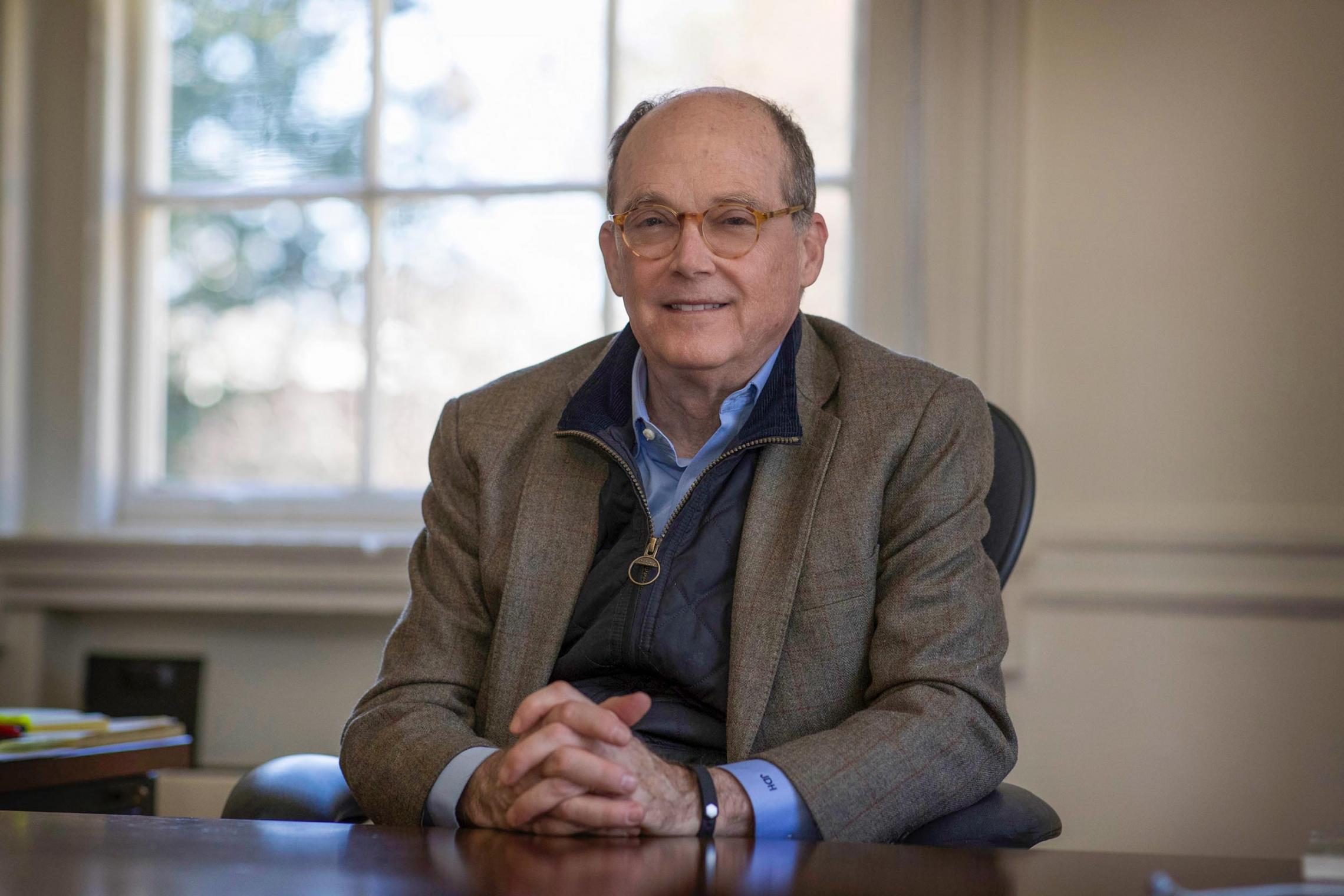 Almost 30 years after James Davison Hunter tapped into the national conscience with his groundbreaking book that introduced the concept of “culture wars,” Hunter is stirring the pot of American introspection all over again.

Hunter, the LaBrosse-Levinson Distinguished Professor of Religion, Culture and Social Theory, published “Culture Wars: The Struggle to Define America” in 1991. The book captured public attention, explaining religious divisions that erupted in America over topics such as abortion rights. Over the years, he has delved into related topics in a quest to understand what guides human morality in the U.S. and around the world.

He is also executive director of the Institute for Advanced Studies in Culture, which sponsors conferences and colloquia, provides doctoral and post-doctoral research support, fields national surveys of public opinion on the changing political culture of late 20th and early 21st century America, and publishes an award-winning journal, The Hedgehog Review: Critical Reflections on Contemporary Culture.

Hunter recently published his fifth book, written with Paul Nedelisky, a fellow at the institute, “Science and the Good: The Tragic Quest for the Foundations of Morality.”

Hunter and Nedelisky ask, “Can science demonstrate what morality is and how we should live?” They give a painstaking review of the origins of the quest to find a scientific foundation of morality and examine many claims – recently popularized in positive psychology, self-help books and similar literature – that science can explain what makes humans moral creatures. To the question of whether this new science of morality shows us how to “fashion a good and peaceable society,” the authors conclude the answer is “no.”

UVA Today recently sat down with Hunter to explore some of the concepts of the new book, and to revisit the “Culture Wars” classic to see how it has held up over time.

Q. What is your new book about?

A. The focus of our book is the question of whether science can do for morality what it does for chemistry and physics – resolve differences with empirical evidence and empirically based logic. Can science demonstrate what morality is and, therefore, how we should live?

If you go into a bookstore or browse online, you can see titles claiming to show “how science can determine human values,” to uncover the “science of moral dilemmas,” to disclose “the biological basis of morality” or “the science of right and wrong,” to reveal “the universal moral instincts caused by evolution,” to explain how a certain molecule is “the source of love and prosperity,” to describe “how nature designed our universal sense of right and wrong,” or to demonstrate “what neuroscience tells us about morality.” All of these claims are all taken from the titles of recent books and articles, and these bold claims are pervasive. The purpose of this new book is to examine those claims. Paul and I believe that what is at stake is the yearning to coherently address some of the knottiest problems of the modern world – not least, “How and upon what foundation do we build a good and just society?”

Q. What is the new science of morality?

A. The new moral science is just the most recent effort in a 400-year-old quest. It represents a new philosophical synthesis along with new technologies based in neural imaging and advances in brain chemistry.

Four centuries of searching has led to repeated failure. As early as the 18th century, [Scottish philosopher] David Hume declared that one cannot derive what one ought to do from claims about what is the case. In short, you can’t get “ought” from “is.” This conclusion is mostly settled philosophical opinion, but in the 1970s, the quest to establish a scientific foundation for morality reemerged with renewed vigor.

What this new science of morality has actually produced is a modest though interesting descriptive science of moral thought and behavior. We now know more, to take one example, about what is happening at the neural level during moral decision-making. But once again, the endeavor has failed to provide a prescriptive ethics.

Q. But the problems don’t end there, do they?

A. No, in spite of its failure, the new moral science tends to over-reach, making aggressive prescriptive claims from really very modest descriptions. For example, biologist David Sloan Wilson says science can prove altruism – but what he does is to conflate a prescriptive ideal with a descriptive observation that draws from primatology. He observes the behavior of altruism, defining it as “a concern for the welfare of others as an end in itself,” but argues that the intentions and motives don’t matter. He says we shouldn’t care about distinguishing different psychological motives that result in the same actions “any more than we should care about being paid with cash or a check.” But is that true?

Do you only care that your spouse acts as though she loves you? That she says complimentary things to you, that she appears to enjoy conversation with you? What if you discovered that she does all of these things without feeling anything for you – or worse, she does all these things while secretly detesting you? Would Wilson claim that this is just a “cash or check” situation? Such a relationship would be functional, but loveless – missing precisely the element that makes acts genuinely altruistic.

Q. So where does this lead us?

A. The discourse of the new moral science has taken on a life of its own. As it is popularized, it assumes a disproportionate authority and influence around what science can say about the problems we face in the world today. As one example, its concepts, assumptions, history, self-understanding, propositions, and inferences underwrite much of the billion-dollar industry that is positive psychology and the happiness movement – which in turn influences education, business, the military, and other institutions.

The actual ethics it produces is, in our view, breathtakingly banal. When it began, the quest for a moral science sought to discover the good. The new moral science has abandoned that quest and now, at best, tells us how to get what we want. In the end, it simply cannot bear the weight of the moral dilemmas we face today.

Q. You say in the book that “to propose an answer in the last pages would be folly, but the urgency for a solution is palpable…” What approach do you think would work better?

A. Against the failure of religion to provide a universally acceptable moral foundation for society, science was an attempt to provide an alternative. The strategy of science was to do an “end-run” around moral differences. Paul and I are of the mind that the only way to find common ground is to acknowledge our deepest difference and to work through them.

Historically speaking, moralities only exist in their particularity and in the particular communities that sustain them. If this is the case, then the only way we are to sustain the goods that we have achieved in the modern age, and to expand their reach, is to find a common moral understanding through our particularities – through our differences – and not in spite of them.

Q. Since you raised it, how have the ideas or the premise of “Culture Wars” held up over time?

A. Well the culture wars have evolved, but they continue and are probably more polarizing today than ever before. There are class dimensions to the culture war today that were not so prominent in previous decades.

It is largely in light of the culture wars and the troubled state of our democracy that we can see the significance of the new moral science. Can we find a common ground in science that will settle disputes among competing factions? Clearly not. What is worse, science has become weaponized on behalf of different sides of the culture war.

One of the fundamental premises of democracy is that we will not kill each other over our deepest differences, but talk through them to find compromise. Our polarized politics today has little to do with serious and substantive discourse. But on what grounds do we come together? Religion only seems to inflame. On the important moral matters, science only offers banalities. So right now, our politics has become a shouting match in which reasoned discourse has evaporated. Our sense is that the only way forward is for citizens to face each other as human beings – people who are defined by complex, confusing, often opaque, but regularly conflicted identities and claims on the world – and to do the long hard labor of working through the particularities that define us toward some kind of common ground.