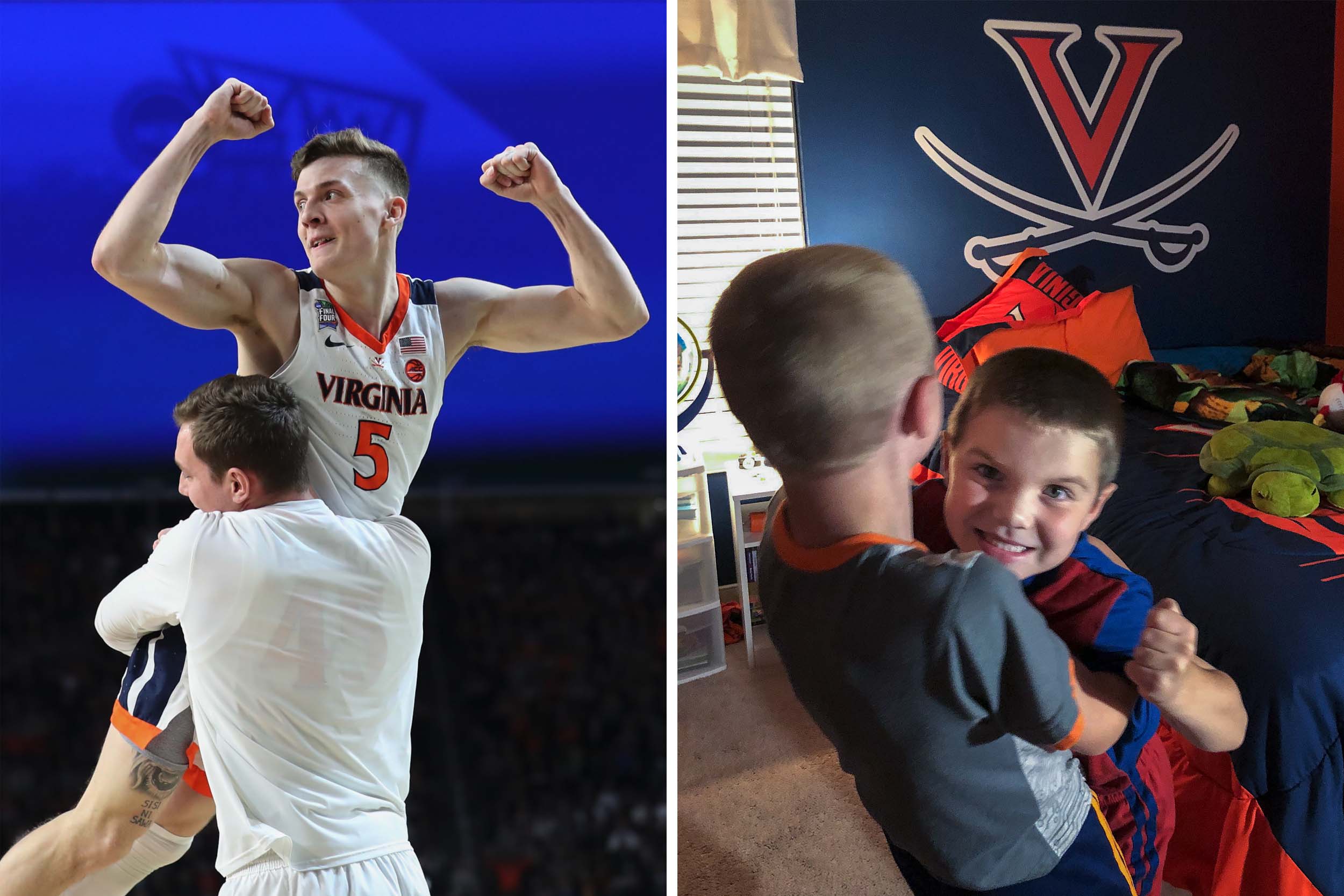 What does a sports photographer do when there are no sports to photograph?

Matt Riley, resident photographer for the University of Virginia’s Department of Athletics, is spending his time away from Grounds recreating some of his best work with two of UVA’s smallest sports fans: his sons.

Every day, Riley showcases a moment in UVA sports history on his Instagram account. The iconic photos are chosen by his sons Carter, 7, and Evan, 4, who then recreate the scene for the camera on Riley’s iPhone.

“I was trying to come up with creative ways to keep my kids active and involved,” said Riley of the decision to start his Instagram photo series.

More than 100 days later, his #WorkFromHome series is still going strong. Riley views it as a way to reconnect with his old work during this time away.

“It’s been a fun trip down memory lane,” Riley said. “It’s amazing some of the stuff I’ve forgotten about, and some of the shoots that never even saw the light of day.”

Here are some of our favorites. 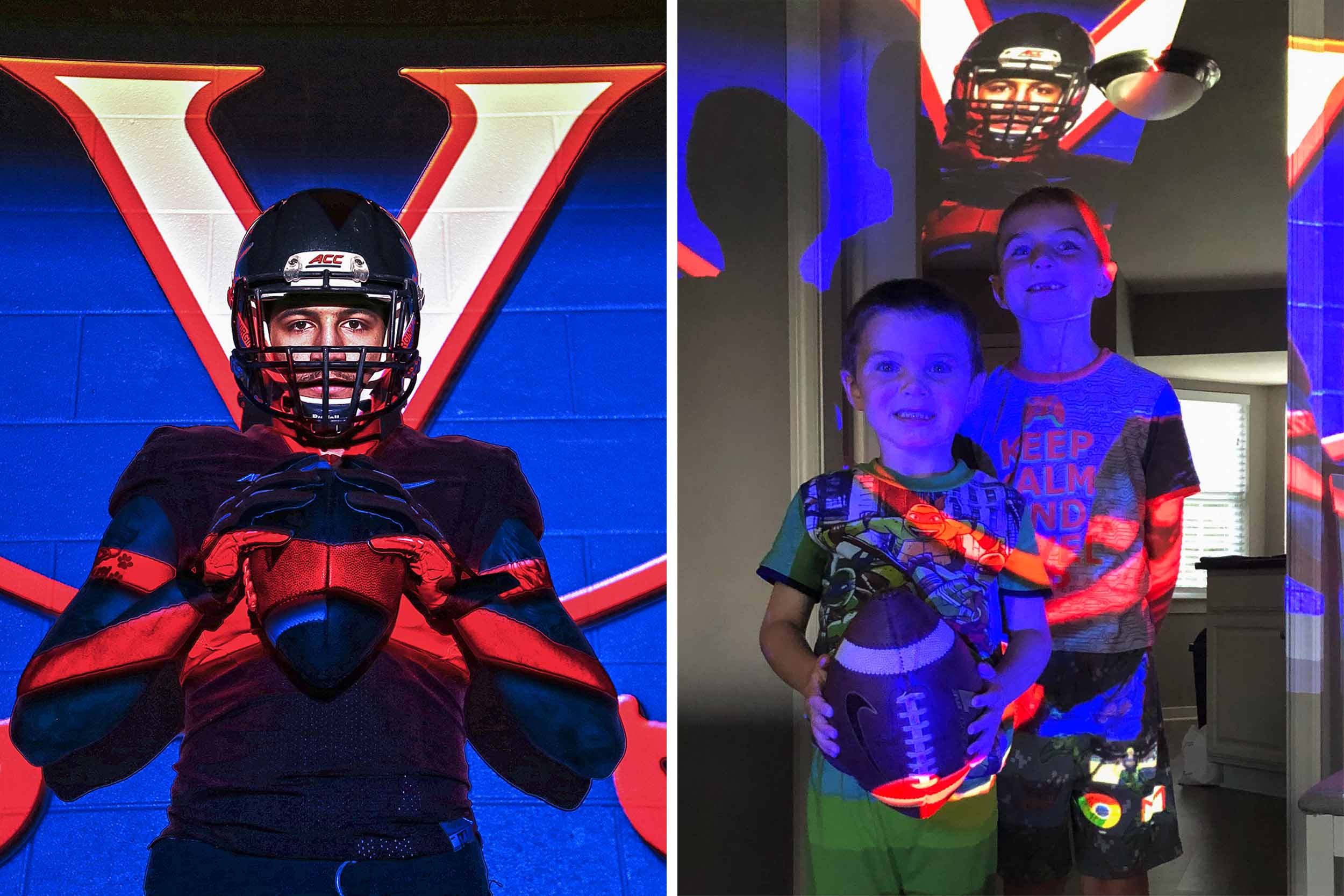 “Quin reached out and said that seeing the photo of the day was one of his favorite things during quarantine, so we featured him,” Riley said. “We recreated one of my favorite photos of all time.” 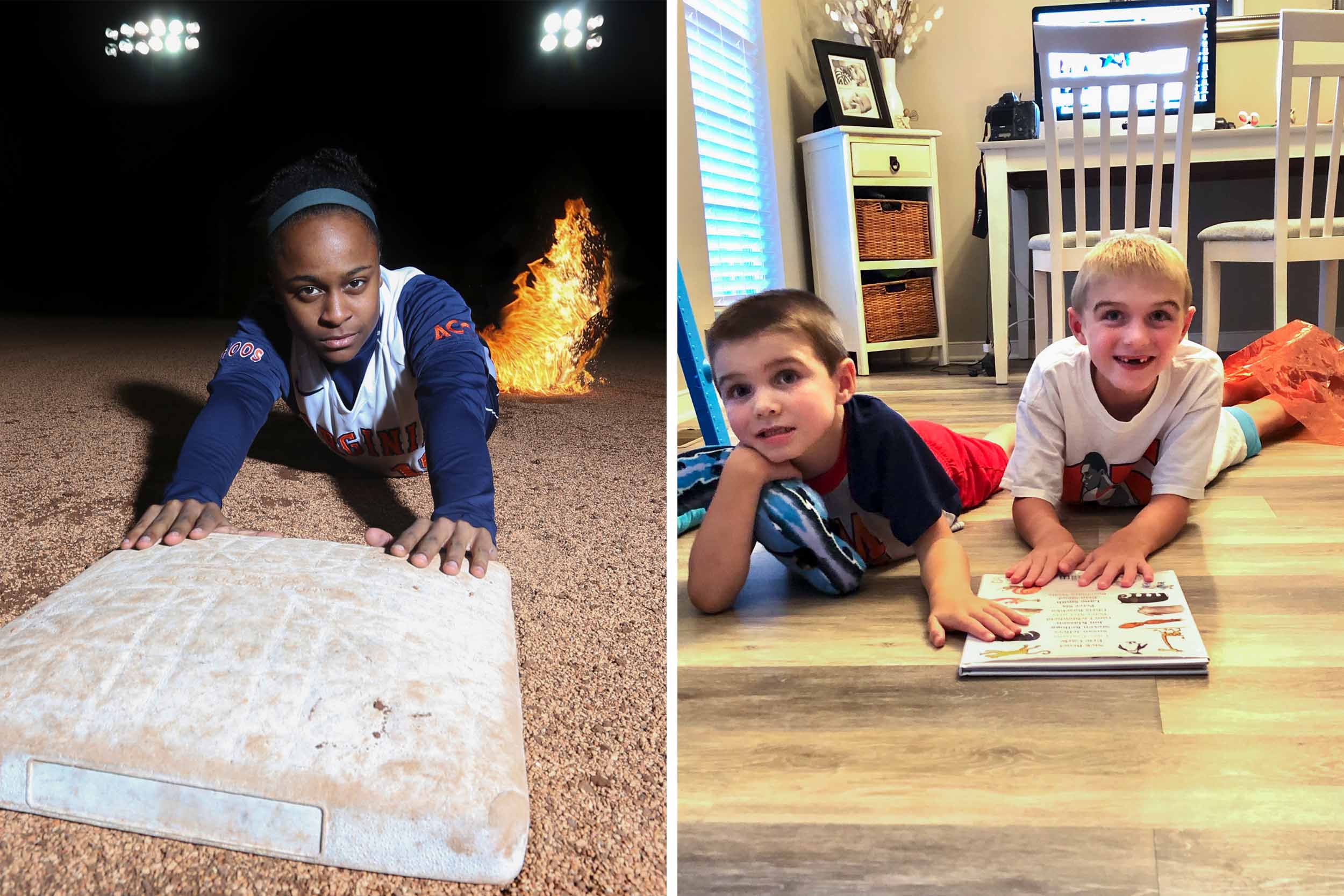 “[The boys] really want to set something on fire because I have so many fire photos,” Riley said of the use of flames in many of his photographs.

This photoset, featuring Taylor Williams of UVA’s softball team, is the compromise they came up with to avoid using real flames.

“You can’t really go down that route here in the converted office,” Riley said. “We improvise!” 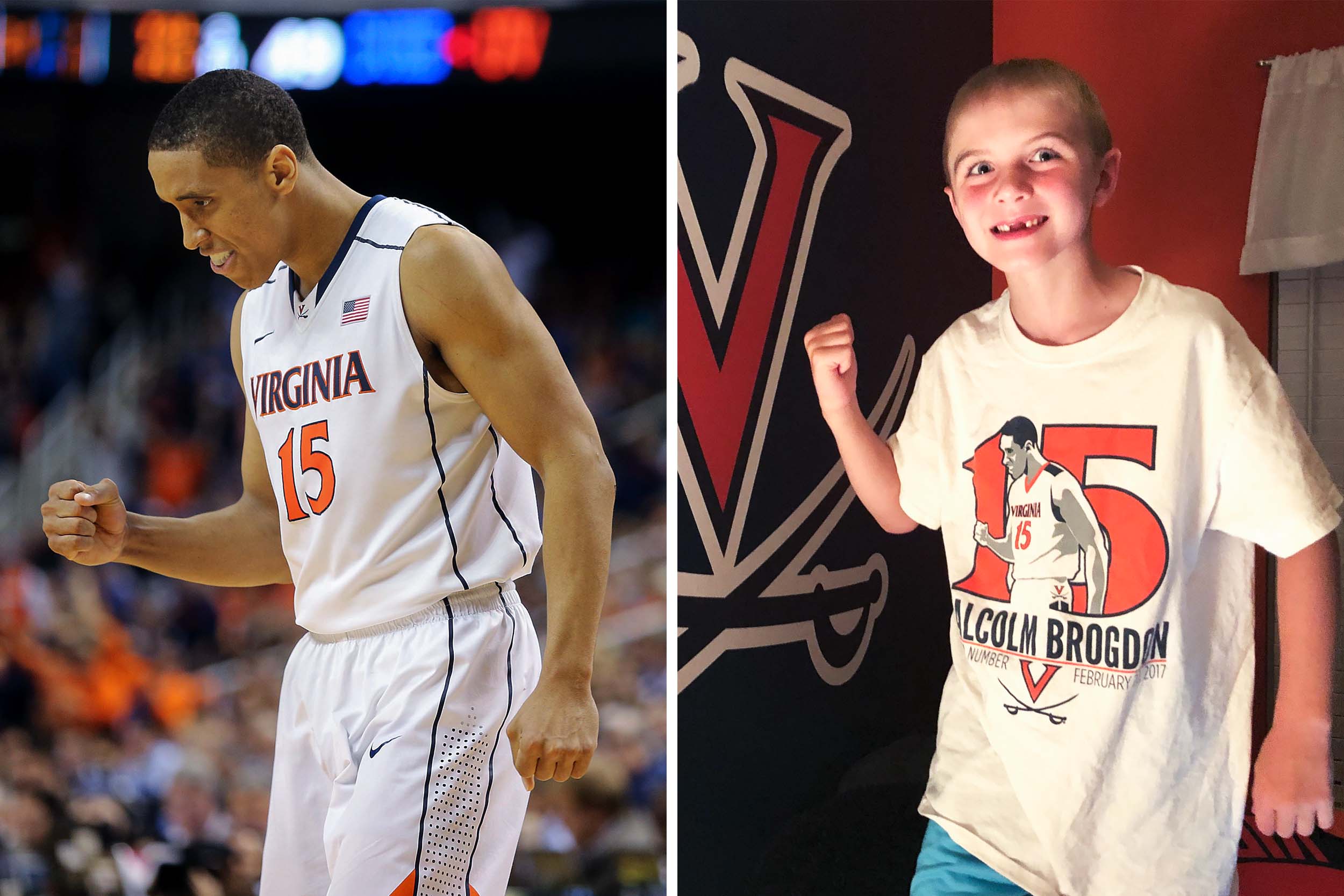 This recreation of Malcolm Brogdon’s famous basketball fist pump is Carter’s personal favorite. Not only did Carter get to recreate this photo solo, but his T-shirt matches! 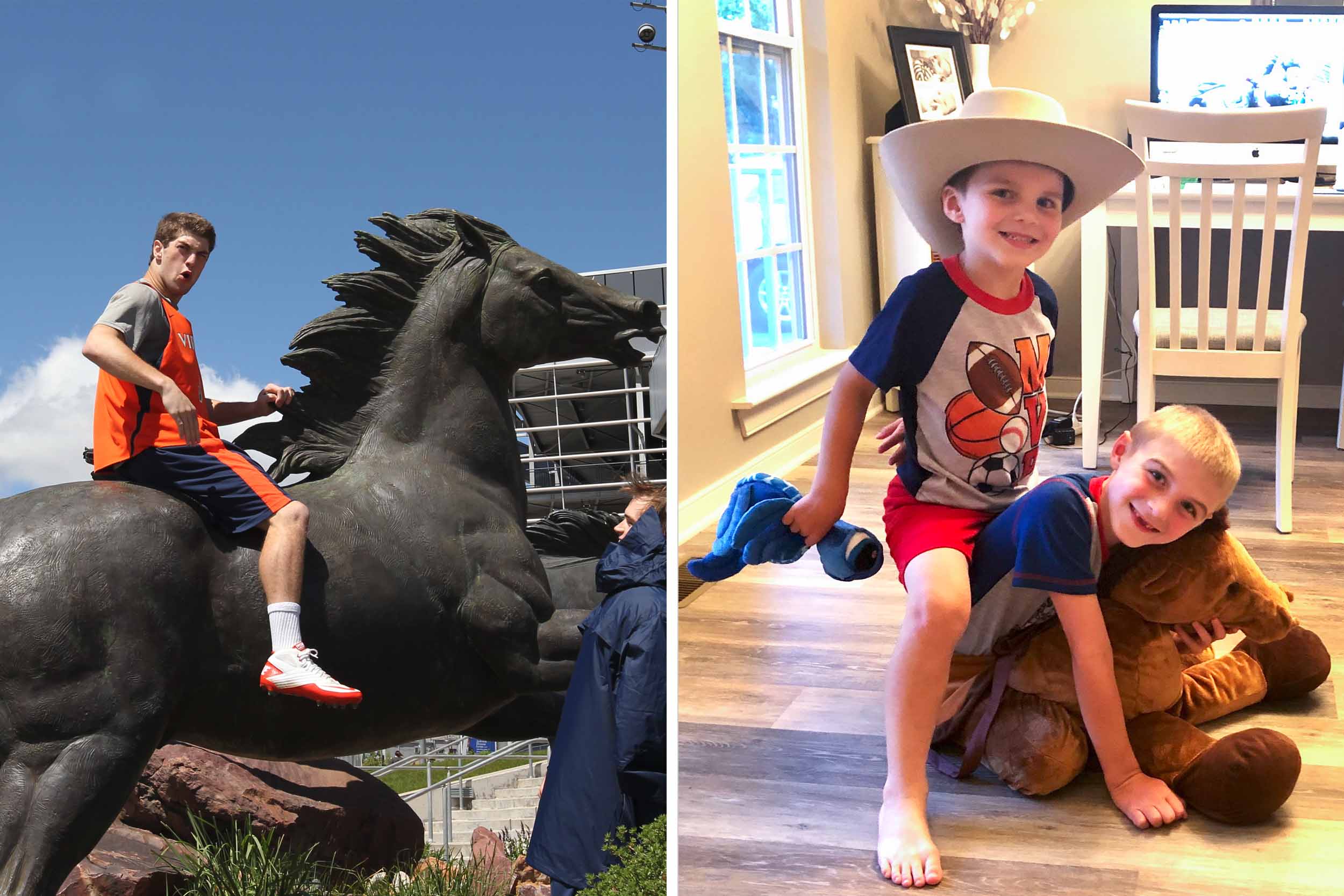 Another favorite is this photoset featuring Ryan Tucker of the Cavalier men’s lacrosse team in Denver.

“We have quite a prop closet in our playroom,” said Riley of the extensive list of costumes and props featured in his photos. 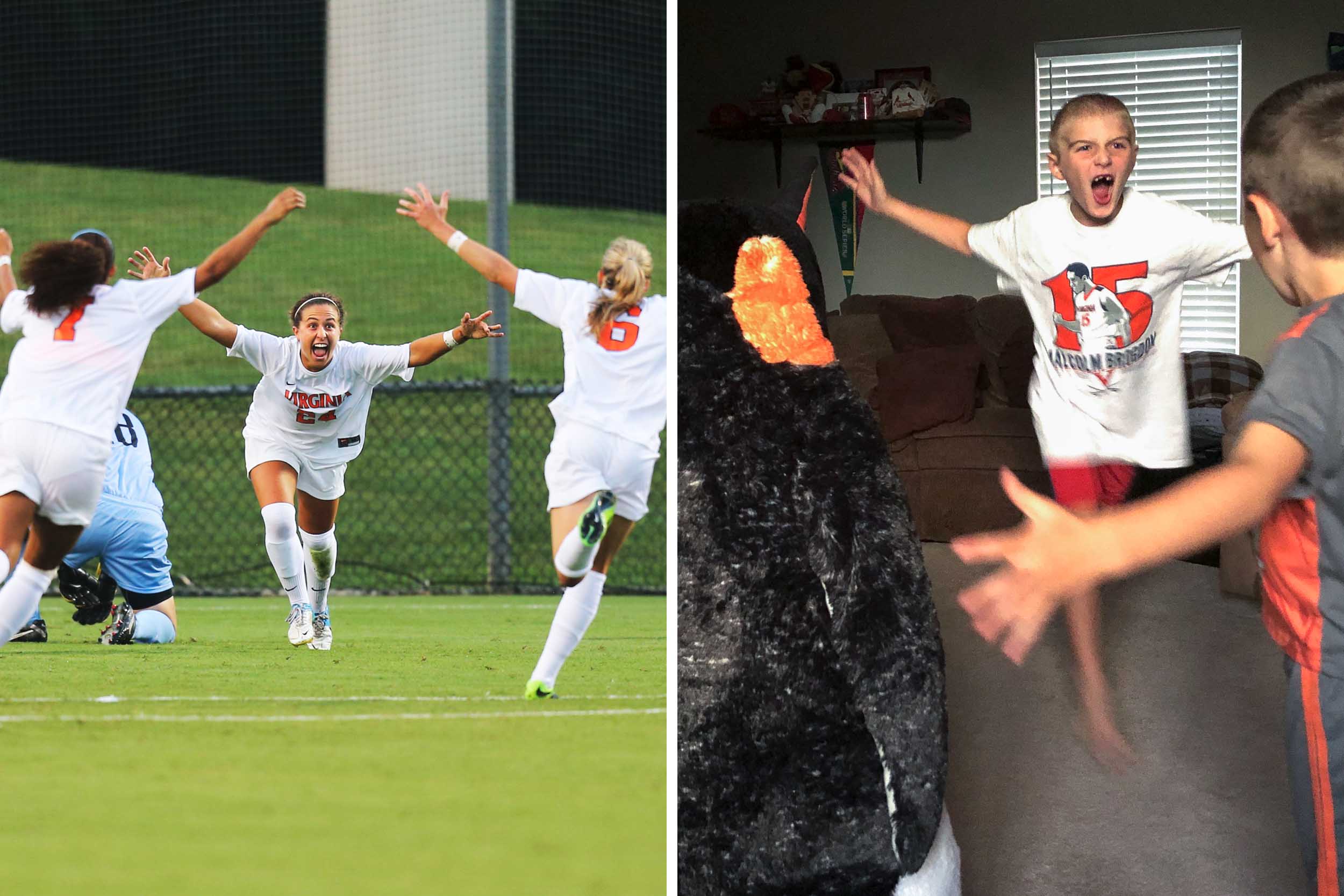 A recurring character in Riley’s photosets is “Daddio Penguin,” a large stuffed penguin who can be seen in this photoset featuring UVA women’s soccer legend Danny Colaprico.

“Evan loves penguins,” Riley said of his 4-year-old. “His penguin is almost as tall as he is!” 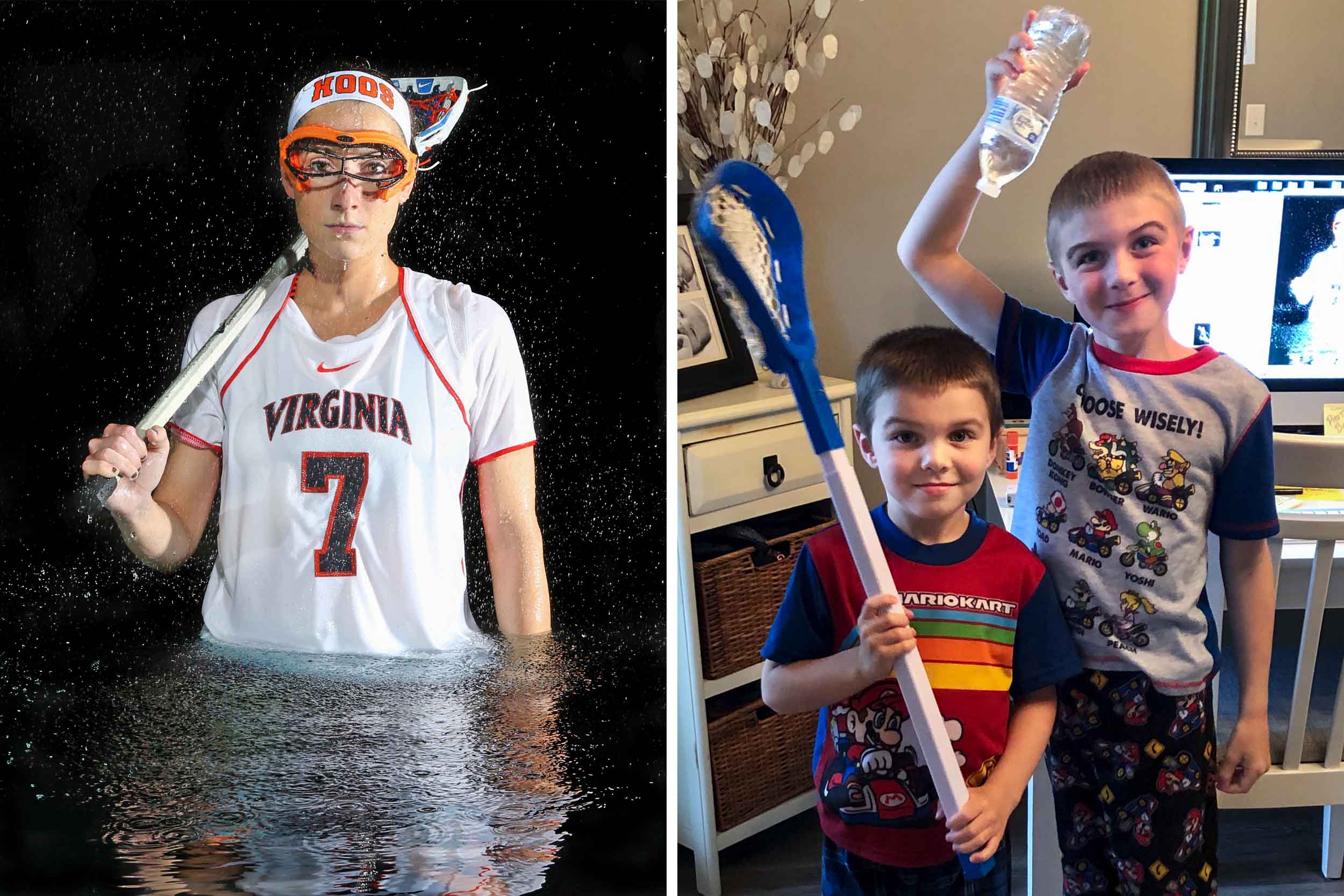 Sometimes the boys have to improvise. Unable to completely submerge themselves in water like Courtney Swan of UVA women’s lacrosse team, the boys opted for a bottle of water and a lacrosse stick.

“No children got wet in the making of the photo at home,” Riley joked in his Instagram caption. 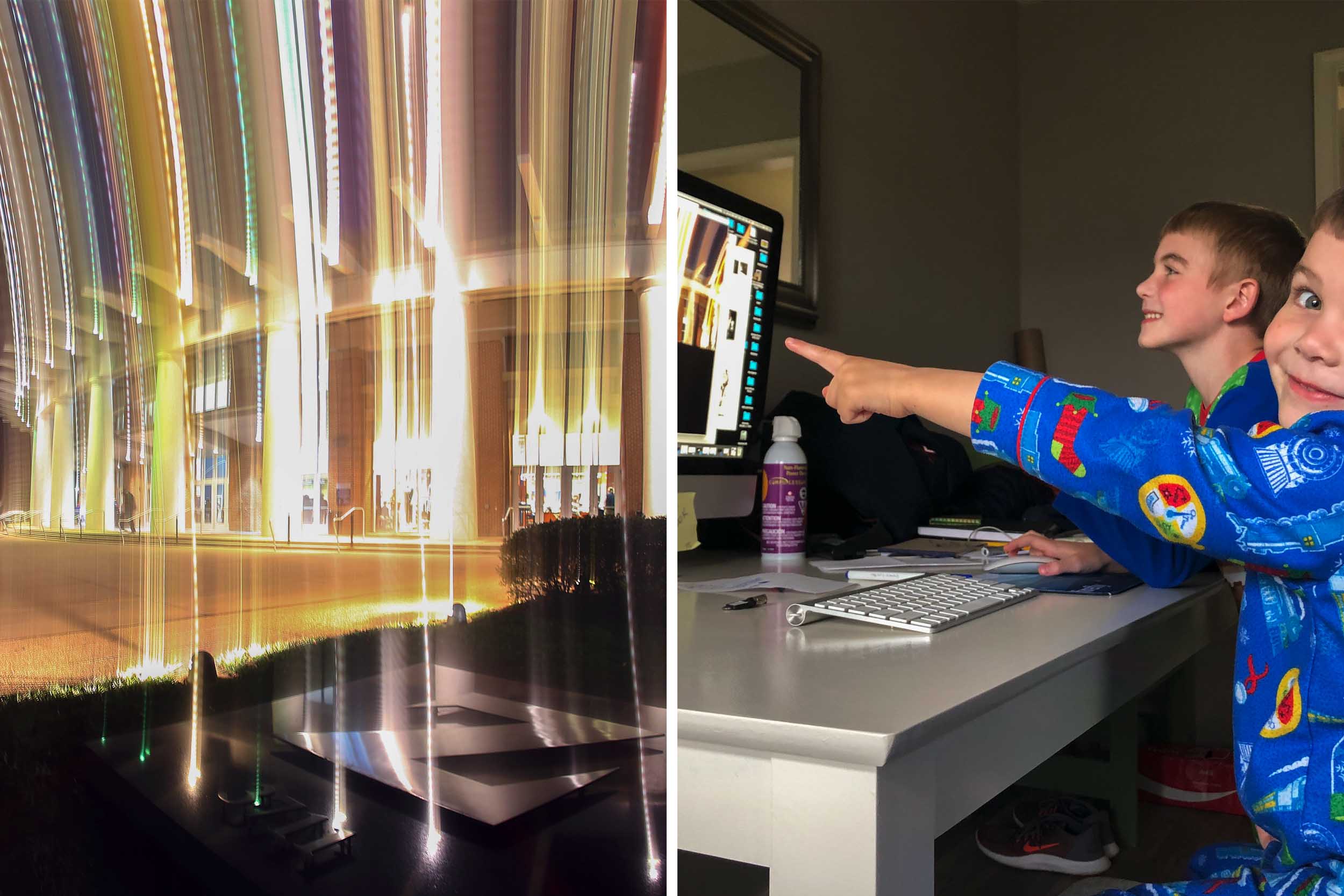 The boys don’t just stick to photos of the athletes themselves. One of Riley’s favorite shots was a recreation of the lights outside of John Paul Jones Arena.

“They think this happens after the basketball games,” Riley said. “They’ve never stayed all the way until the end, so they thought it was some cool light show that happens as fans are leaving.”

The boys chose to recreate the “light show” using their own bright smiles.

For Riley, the #WorkFromHome project has been much more than something to occupy his time during quarantine.

“It’s hard to believe we’re at day 100. It’s definitely been fun to have something to connect to my boys. Just having this connection will help bring some joy to this time.”

What’s Next for UVA’s Class of 2022? END_OF_DOCUMENT_TOKEN_TO_BE_REPLACED