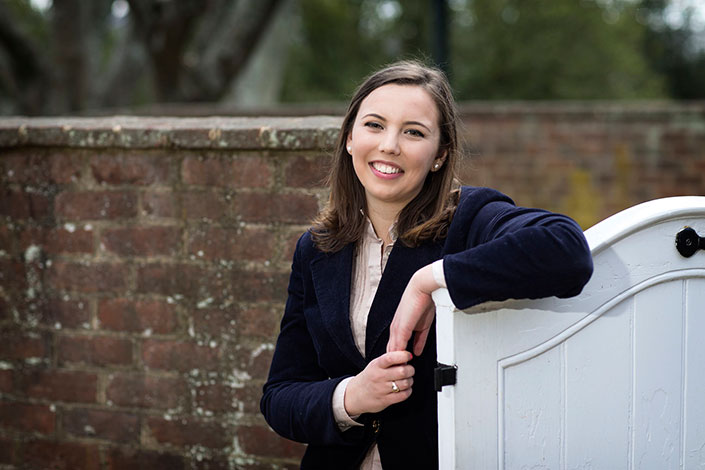 University of Virginia student Anna Cait Wade, 21, of Suffolk, will spend her summer working with the Mariposa DR Foundation, a non-governmental organization working to end generational poverty in the Dominican Republic by empowering adolescent girls.

Wade, a fourth-year student majoring in women, gender and sexuality in U.Va.’s College of Arts & Sciences, has received a $10,000 Davis Projects for Peace award to pursue this venture, and plans to implement a leadership development and mentoring component to the foundation’s day program for girls.

“The aim of my project is to equip the young women of Mariposa with the tools they need to lead confident, autonomous and purposeful lives,” Wade said. “These young women face an array of challenges in their everyday lives, including the risk of abduction, sex trafficking, early pregnancy and child marriage. Despite all this, Mariposa believes in their ability to become leaders of their community and of their own lives.

“These resilient, bright, passionate young women are eager to rise up to the expectations before them,” she said. “I hope that as an ally and a friend I can help them do so.”

The Davis United World College Scholars Program, which administers the Projects for Peace program, invites undergraduates at colleges and universities participating in the Davis Program to design and propose grassroots projects they can implement during a summer. The 100 “most promising and doable” proposals each receive $10,000 grants, which were funded by the late Kathryn W. Davis, a lifelong internationalist and philanthropist who died in 2013 at the age of 106.

Wade said a central part of her work at U.Va. has been studying the ways girls create a ripple effect in their community when they complete more schooling and have more opportunities for economic empowerment. She first worked with Mariposa DR Foundation as a summer volunteer in 2014.

“Enabling a girl to stay in school longer means she will marry later; have fewer, healthier children; and be much less likely to contract HIV/AIDS,” Wade said. “She also is more likely to invest money she earns back into her family, thus creating a positive ripple of change throughout her community. This makes investing in girls of the developing world to be a very appealing development strategy.”

But Wade is also cautious about using girls merely as a means to an economic end.

“I partnered with Mariposa because I believe strongly in its holistic and visionary model,” she said. “It is a constant in the lives of the girls in the community from childhood to adulthood, and everyone at the foundation believes in supporting the goals and dreams of each individual girl. I hope that my program will enable them to expand their transformative model even further.”

“Anna Cait is warm, enthusiastic and inspired – obviously by the women she has had the opportunity to mentor through the Mariposa Foundation,” he said. “I think it was her creativity and attention to detail that won her the award. She leaves no doubt in your mind that she will accomplish her goals – and do so responsibly.”

Wade was in the Jefferson Public Citizens program, a member of the Young Women’s Leadership Program, a house manager and Standards Board representative for the Sigma Kappa sorority, a Panhellenic counselor and an inter-sorority counselor, a Madison House elementary school tutor, an Alternative Spring Break participant and a site leader for Project SERVE, which introduces incoming students to service and service learning opportunities at U.Va. She plans a career in development work.

Amanda J. Davis, a faculty member in the Department of Women, Gender & Sexuality Studies, has know Wade for more than two years and is currently mentoring her in an independent study project.

“Anna Cait is someone who lives up to the highest ideals of the Davis award, its aims and its inherent sense of possibility,” Davis said. “She is an excellent and conscientious student, an inquisitive thinker and a bright talent who is dedicated to creating sustaining change. She approaches her work in the DR with the Mariposa Foundation with sincerity, openness and a keen sense of purpose. I believe the reach of her work is expansive, necessary and potentially transformative for hundreds of adolescent girls.”

“I am so grateful to win the Davis award,” Wade said. “It is an incredible honor, and I am so excited to return to Mariposa after graduation. I have been waiting for the day that I can officially tell the girls that I am coming back. They are dear to my heart, and I am humbled and overjoyed for the opportunity to return to serve them once again.”

A Year We Will Never Forget: 2019-20 in Review END_OF_DOCUMENT_TOKEN_TO_BE_REPLACED

‘What Will You Carry With You?’ Remarks From UVA President Jim Ryan END_OF_DOCUMENT_TOKEN_TO_BE_REPLACED