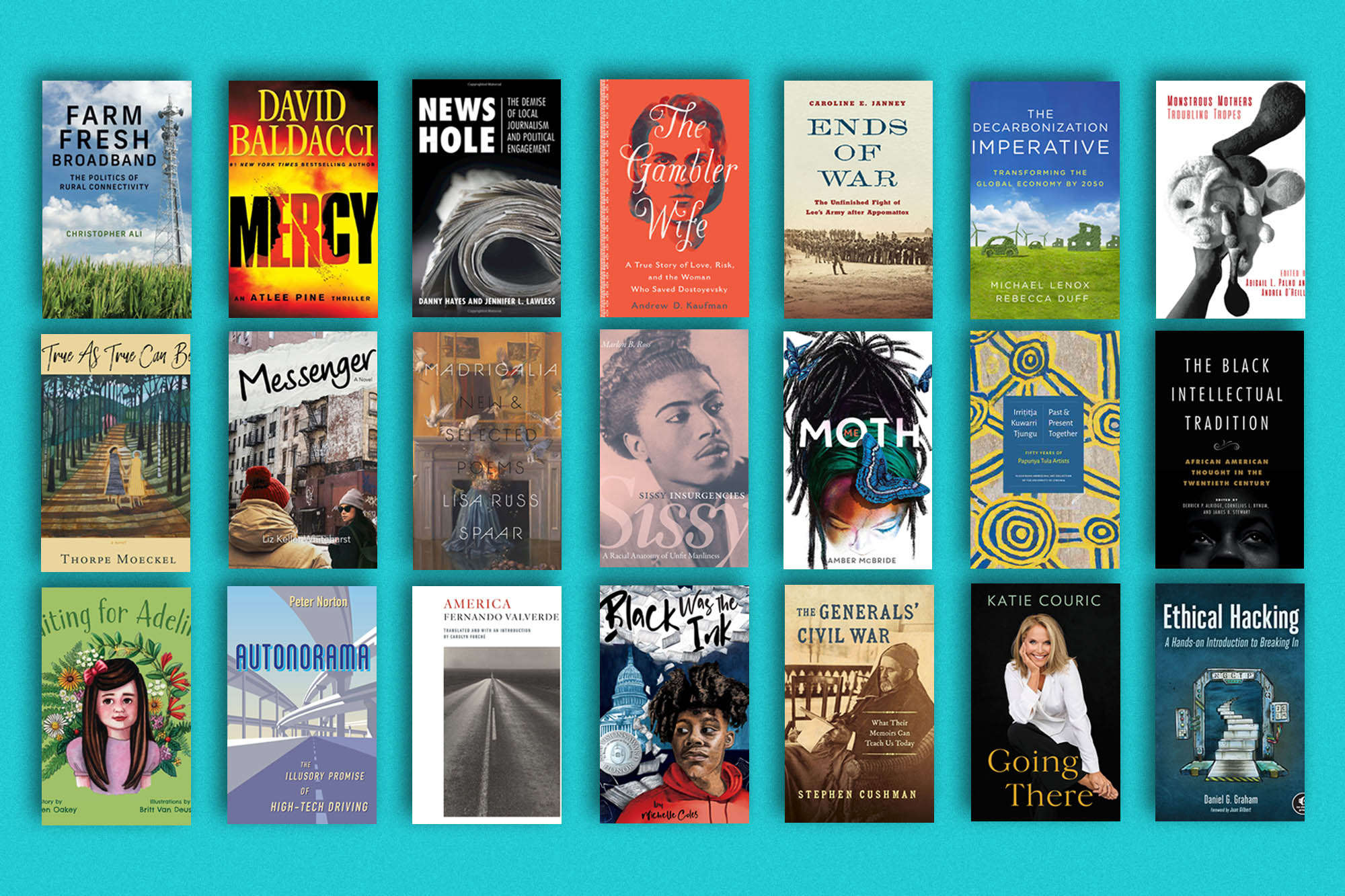 From Civil War history to young adult novels, this selection of new books by University of Virginia faculty and alumni covers a range of topics and should appeal to a variety of readers.

See below for 21 titles that have come out since the end of summer, including poetry and fiction, business advice and technology. They add to UVA Today’s earlier list in June that drew from books published mostly in the first half of the year.

Ali is currently a frequent spokesperson in major media outlets, addressing the need to expand internet access, especially in rural areas. The book analyzes rural broadband policy in the U.S., asking why millions of rural Americans lack broadband access and why the federal government and large providers are not doing more to connect the unconnected.

• Derrick P. Alridge, professor of education in the School of Education and Human Development, and co-authors Cornelius L. Bynum and James B. Stewart, editors, “The Black Intellectual Tradition: African American Thought in the 20th Century”

This volume presents essays on the diverse thought behind the fight for racial justice, as developed by African American artists and intellectuals; performers and protest activists; institutions and organizations; and educators and religious leaders. By including both women’s and men’s perspectives from the U.S. and the African diaspora, the essays seek to explore the full landscape of the Black intellectual tradition.

This young adult novel is about a 16-year-old teenager who leaves Washington, D.C., to spend the summer at his relatives’ farm in Mississippi and meets a ghostly ancestor from the Reconstruction Era there.

For more than 40 years, Katie Couric has been an iconic presence in the media world. In this memoir, she reveals what was going on behind the scenes of her sometimes tumultuous personal and professional life – a story she’s never shared, until now. Of the medium she loves, she said, “Television can put you in a box; the flat-screen can flatten. On TV, you are larger than life, but smaller, too. It is not the whole story, and it is not the whole me. This book is.”

• Stephen Cushman, Robert C. Taylor Professor of English, “The Generals’ Civil War: What Their Memoirs Can Teach Us Today”

Cushman considers Civil War generals’ memoirs as both historical and literary works, revealing how they remain vital to understanding the interaction of memory, imagination and the writing of American history, especially current conflicts over the history and meanings of the Civil War.

A crash course in modern hacking techniques, “Ethical Hacking” is already being used to prepare the next generation of offensive security experts. In its many hands-on labs, readers can explore crucial skills for any aspiring penetration tester, security researcher or malware analyst.

• Caroline E. Janney, John L. Nau III Professor in the History of the American Civil War and director of the John L. Nau III Center for Civil War History, “Ends of War: The Unfinished Fight of Lee’s Army After Appomattox”

In this new history of the aftermath of Appomattox, Janney reveals that Lee’s surrender was less an ending than the start of a period marked by military and political uncertainty, legal and logistical confusion, and continued outbursts of violence. Ultimately, what unfolds is the messy origin story of the Lost Cause, laying the groundwork for the defiant resilience of rebellion in the years that followed.

• Andrew D. Kaufman, associate professor and lecturer in Slavic Languages and Literatures department, “The Gambler’s Wife: A True Story of Love, Risk, and the Woman Who Saved Dostoyevsky”

“The Gambler’s Wife” offers a fresh and captivating portrait of Anna Snitkina, who became Fyodor Dostoyevsky’s trusted first reader and confidante, then his wife, and finally his business manager. She reversed her husband’s freefall and cleared the way for two of the most notable careers in Russian letters – not just her husband’s, but also her own. Kaufman’s book offers a welcome new appraisal of an indomitable woman whose legacy has been nearly lost to literary history.

Drawing on detailed analysis of 15 years of reporting in more than 200 local newspapers, along with election returns, surveys and interviews with journalists, this study shows that the demise of local journalism has played a key role in the decline of civic engagement.

Lenox and Duff suggest that only with significant innovation and disruption across all of the major industry sectors – transportation, energy, industrials, buildings and architecture – will we be able to achieve the goal of “decarbonizing” the global economy by 2050. The book is a follow-up to Lenox’s “Can Business Save the Earth? Innovating Our Way to Sustainability.”

McBride describes her book as “a novel in verse about self-discovery. ‘Me (Moth)’ has a splash of Hoodoo, a little magic and a lot of heart.” Nominated for a National Book Award, “Me (Moth)” has garnered praise and other recognition, such as being named one of 10 best young adult books by @bookpage.

This young adult novel explores the lifeways of rural mountain families who remain tied to traditional ways of living, such as raising hogs, poultry, hunting squirrels and using local plants for medicine, among others. The winter holiday season, the warming earth, and the ways that misunderstanding and prejudice can harm relationships between friends and between generations are also themes in the novel.

Norton argues that driverless cars cannot be the safe, sustainable and inclusive “mobility solutions” that tech companies and automakers are promising us. The salesmanship behind the driverless future is distracting us from investing in better ways to get around that we can implement now. Unlike autonomous vehicles, these alternatives are inexpensive, safe, sustainable and inclusive.

In this book, a young girl struggles with language, and her family’s journey to connect with her. It is based on her family’s experience, but the author wrote it to connect to the speech therapy community and to spark discussions about children who struggle in this way, or who process language differently.

“When we force motherhood to bear the terrors of what it means to be human, we inflict trauma upon those who mother,” write the editors. The contributors to this collection explore and challenge a multitude of interdisciplinary ideas and depictions of bad mothering, revealing why we turn to them and asserting maybe we shouldn’t.

Ross focuses on the idea of the “sissy,” or man considered effeminate, in order to rethink how Americans have thought of and treated manhood and boyhood from the 1880s to the present. He reconsiders several Black leaders, intellectuals, musicians and athletes within the context of the opposite of manliness, including Booker T. Washington, George Washington Carver, James Baldwin, Little Richard and Wilt Chamberlain.

More than a catalog, this book contains original essays and contributions from a range of artists, collectors and scholars.

Mournfully lyrical, politically sharp, with a sweeping view of American roots, dysfunctions and ideals – as if from above, and yet also from within – this is a book that deconstructs the legacy of empire. From the Mississippi River to Fulton Avenue, from slavery to “lone wolf” shooters, Valverde grieves, but does not wince away from all that is lost to greed and a culture of violence, painting an urgent portrait of “the thirst of America / a smile satisfied to death.”

Whitehurst launched “Messenger” as a serial podcast in 2020. Now in print, the debut novel tells the story of 20-something journalist Alana Peterson, who is convinced she’s found her big break when she meets Messenger, a mysterious old woman who delivers life-changing messages to seemingly random people all over New York City.