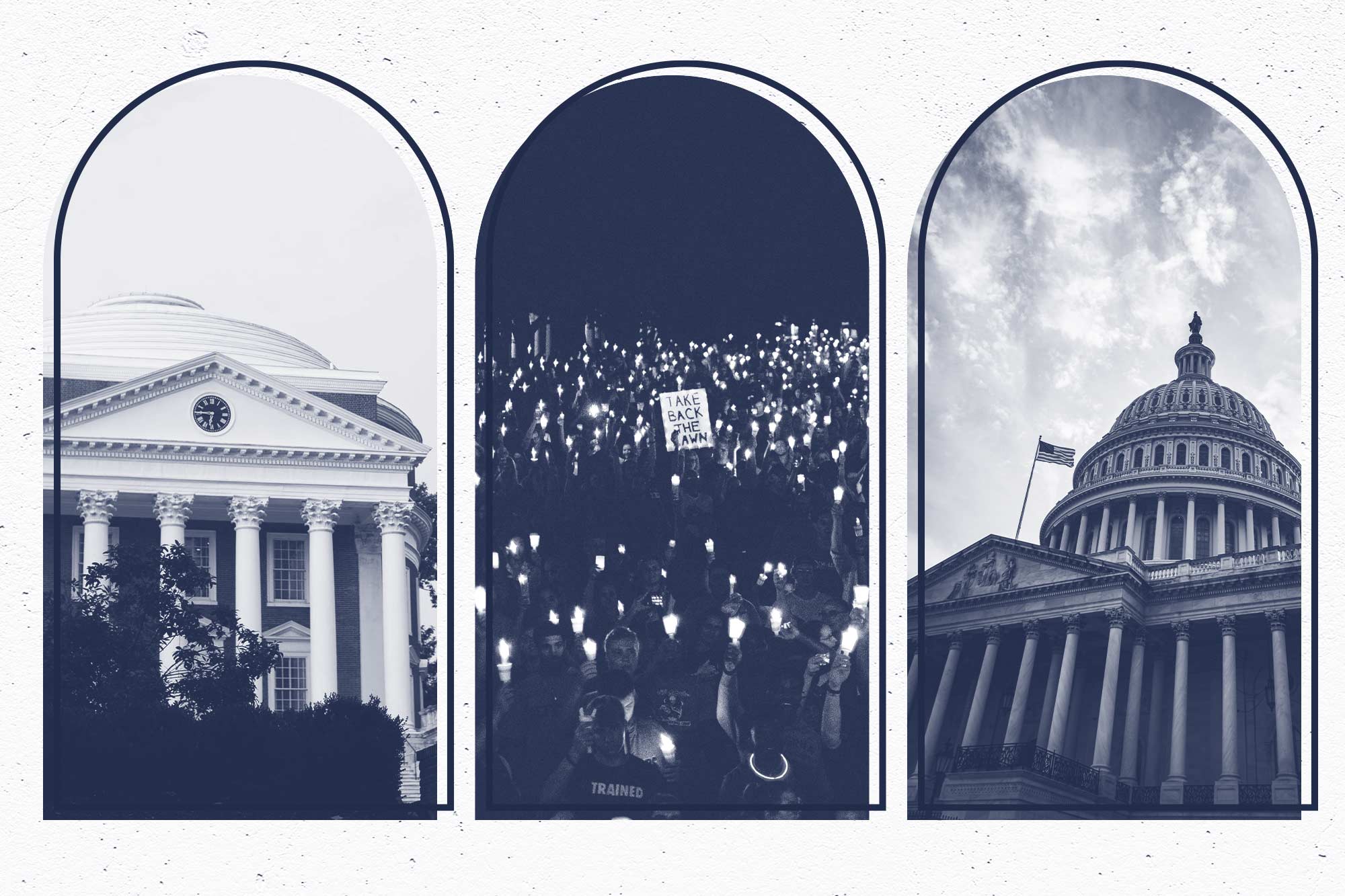 When white supremacists marched down the University of Virginia’s Lawn on Aug. 11, 2017, attacking students and others gathered at the statue of founder Thomas Jefferson, it shook much more than the local community. It revealed just how unprepared Americans were to grapple with a new violent wave of racism and antisemitism, participants in an online panel discussion said Thursday.

“August 11th and 12th were formative in ways that quite frankly I’m still grappling with,” Slate editor Dahlia Lithwick, a longtime Charlottesville resident, said. It felt “as though an earthquake happened that we have not reckoned with fully.”

The event, sponsored by the UVA Jewish Studies Program and the Law School’s Karsh Center for Law and Democracy, reflected on Aug. 11-12 and the lessons learned since. Lithwick joined Micah Schwartzman, Hardy Cross Dillard Professor of Law and director of the Karsh Center, and moderator James Loeffler, Berkowitz Professor of Jewish History and the Ida and Nathan Kolodiz Director of the UVA Jewish Studies Program, to discuss the impact of the Unite the Right rally that ended in violence and the deaths of three people.

Though that summer in Charlottesville was earlier marked by a series of white nationalist events attracting outsiders to town, including a Ku Klux Klan rally, those occasions had been relatively peaceful. Despite online chatter forecasting that August would be different, Lithwick noted, no one seemed prepared – just as Americans were surprised by violence at the U.S. Capitol on Jan. 6, 2021.

“How is it possible that we keep being surprised by events that are almost annual?” she said. “[The] Groundhog Day of white supremacist activity, of antisemitic activity, that we continue to think of as singular is part of the definition of the problem.”

Schwartzman, who attended UVA for his undergraduate and law degrees, said failing to name what was so evident – that the Unite the Right rally participants comprised white supremacists and neo-Nazis – suggested an inability to address what’s wrong.

“We couldn’t even find the right words to describe what was happening,” he said.

Loeffler added, “There was so much information flowing, yet there was some inability to process it.” 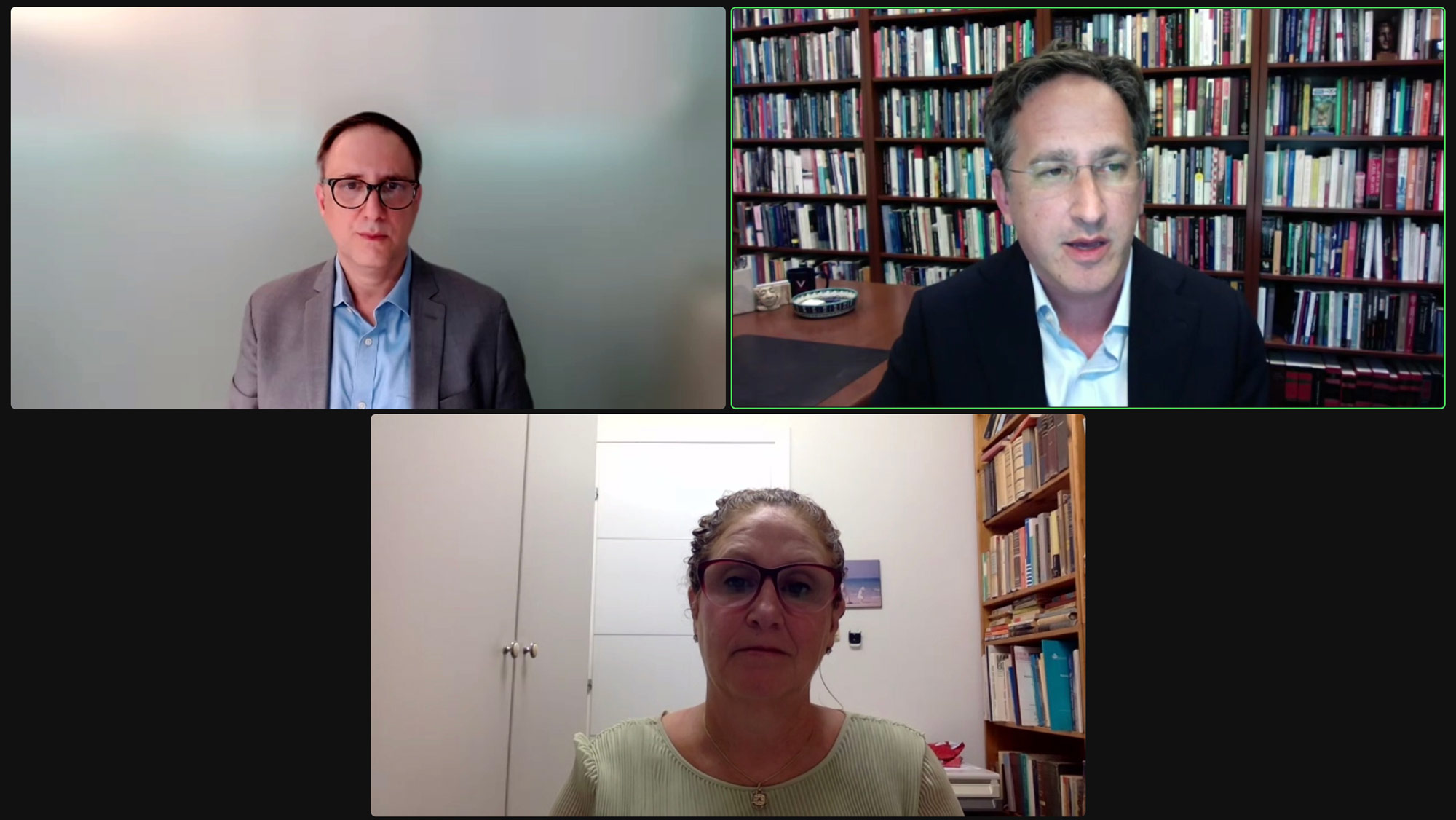 Though Unite the Right supporter James Alex Fields received two life sentences for killing Heather Heyer and severely injuring several other bystanders when he rammed his car into a crowd on Aug. 12, Lithwick said the legal system struggled to hold rally organizers responsible.

“We are very, very far away from having a legal system that in fact was adequate, both in advance and after the fact,” Lithwick said.

Schwartzman said one reason authorities struggled to respond, both during Aug. 11-12 and afterward, was the presence of guns.

“We were not legally equipped to deal with an armed protest,” he said.

It was “mind-boggling” that the same kind of violence happened again on Jan. 6, he added.

Still, Schwartzman said, “if you walk into court and you have evidence that there’s going to be violence at a protest … that evidence would be taken much more seriously today than it would’ve been taken in 2017.”

Courts and officials are more prepared to handle issues related to the limits of free speech, and where to draw the line between protest and violence, the panelists said.

“Law isn’t just what’s on the books,” Loeffler said. “It’s also how we use it, how we talk to courts.”

Considering the explosion of social media, Lithwick said, First Amendment doctrine is “moribund” and due for an update. She pointed to how organizers of the August rally found ways around fully revealing their plans in their online speech, as well as new ways to incite violence. These are some of the same concerns surrounding the Jan. 6 inquiry, she noted, in which threats have come in the form of revealing personal information about a poll worker. One such official, Ruby Freeman, had her house trashed after her address was posted online.

“We have to be mindful, not just of the limits of how we think about the First Amendment – that’s its own problem – but that we actually are looking at people who are very deliberately crafting messages that seem to elide any responsibility,” Lithwick said.

In the wake of Aug. 11-12, then-UVA Law student Elizabeth Sines, now a 2019 graduate, became the lead plaintiff in another historic chapter to the protests, the federal lawsuit Sines v. Kessler. In November, the nine plaintiffs won a $25 million award against the white supremacists who organized the violence.

The trial, Loeffler said, revealed not only “how cunning and strategic the organizers of this violent rally were, but also how much they relied on this technology to be able to mobilize, to communicate.”

Schwartzman gave credit to those bringing the lawsuit for ensuring the organizers of the Unite the Right rally faced accountability when the federal government did not bring criminal charges.

“Rule of law is an idea, but it’s also a practice,” Schwartzman said. “It requires the support of institutions, and it requires just an enormous amount of work, and of resources and energy and funding, but it also requires emotional investment on the part of plaintiffs who were courageous and brave to come forward, knowing that they were going to have to relive all these events, that they were going to be targeted for harassment and threats and worse.

“We think of rule of law, I think sometimes as a kind of thin principle or virtue of a democratic society, and I think this trial shows us it’s anything but.”

Holding such offenders accountable can be even more difficult, they noted, when there is widespread mistrust of institutions like the media, police and government.

“I think one answer to this problem is to use the legal process in a transparent way, and to put all the evidence on the record and to show that it can be done successfully, and that I think is what happened in Sines against Kessler,” Schwartzman said.

The Karsh Center – which supports interdisciplinary programming and symposia focused on respect for the rule of law, civic engagement and civil discourse – was founded in response to Aug. 11-12 as part of a $44 million gift from alumni Martha Lubin Karsh and Bruce Karsh. The Karshes also gave $50 million toward founding of the Karsh Institute of Democracy at UVA in 2021.

What’s the True Story of Brooks Hall? This Architectural Historian Has the Answer END_OF_DOCUMENT_TOKEN_TO_BE_REPLACED

At UVA, There Is a Club for Everyone END_OF_DOCUMENT_TOKEN_TO_BE_REPLACED