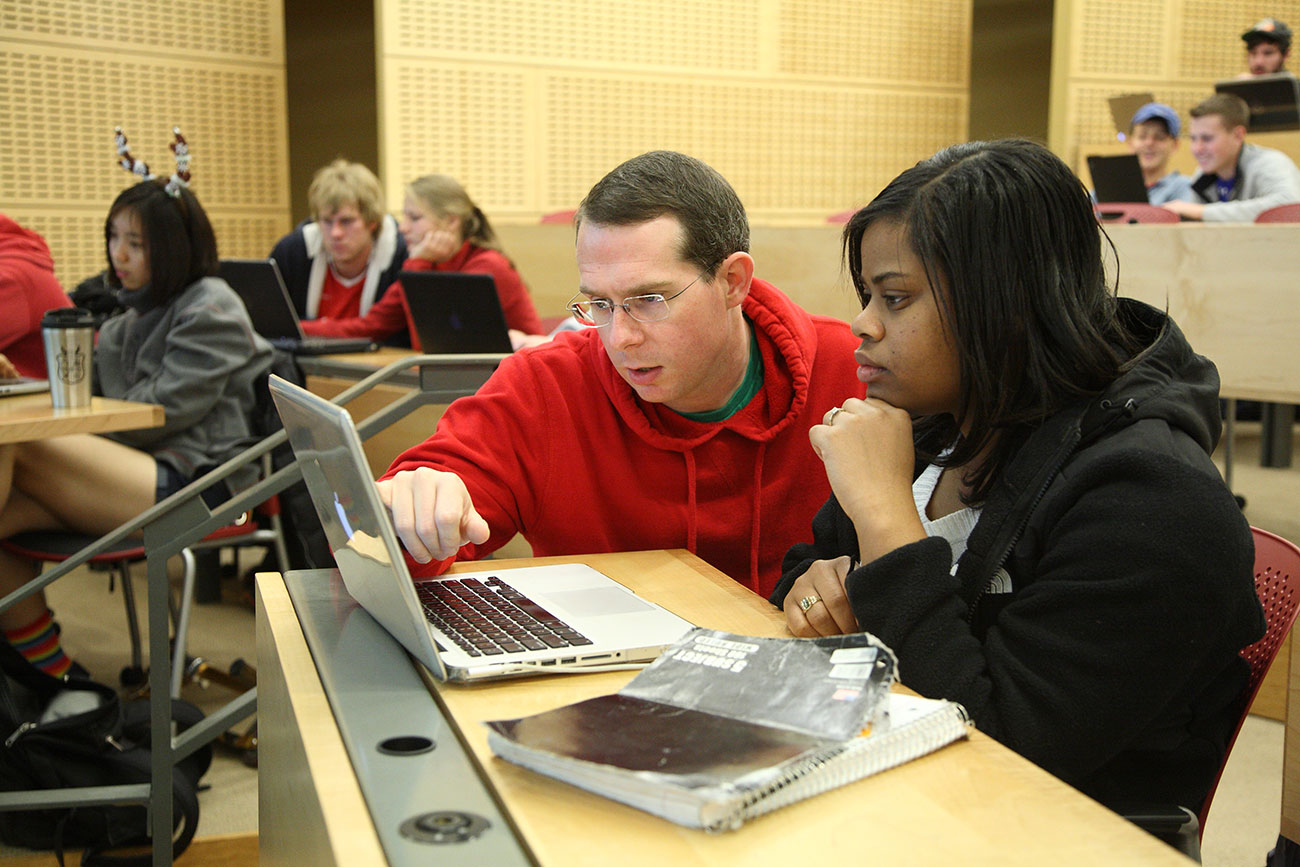 Mark Sherriff, an associate professor of computer science, won a national award for his innovative approaches to teaching. His introductory programming course is one of the most popular at UVA.

Mark Sherriff, an associate professor in the University of Virginia’s Computer Science Engineering Department, has been named the recipient of a national teaching award.

Sherriff, who joined the faculty of the School of Engineering and Applied Science in 2007, focuses his teaching on introductory computer science, computer game design, software engineering, and Web and mobile app development. He leads the Game Design Research Group at UVA. In 2014, he earned a UVA All-University Teaching Award, and he won the Hartfield-Jefferson Scholars Teaching Prize in 2010. He was named Professor of the Year for UVA’s chapter of the Association for Computing Machinery in 2010 and 2012.

“The computer science field is becoming much more diverse, with new students of various backgrounds and age groups,” Sherriff wrote in his teaching portfolio. “People are turning to computer-related fields for opportunities to start their careers in a growing area, jump-start their current careers, or just out of curiosity. … These different approaches, backgrounds and motivations create an interesting environment in which to teach. I try to teach my classes to reach all of the students in my class, not just those who are there for reasons that are more in line with my thinking.”

Sherriff’s introductory programming course is one of the largest courses at UVA, with around 1,000 students enrolled per year. Sherriff engages the students through a model he calls “inform, experience, implement.” This means he first informs students by teaching them the history of a topic. Next, he gives students an activity during which they can experience how the problem or technology affects real life. Finally, he teaches students the computer science algorithms and techniques needed to solve the problem.

For example, students are sent on an encrypted scavenger hunt around UVA’s Grounds to decode the day’s lesson about encryption methods. He also helped establish a course in which teams of students were assigned to assist non-profit organizations with Web and software development, providing the students with valuable customer-service and problem-solving experience.

“Professor Sherriff is a leader in the kind of hands-on, minds-on learning experiences we intend to provide for all of our students at UVA Engineering,” Engineering School Dean Craig Benson said. “This award is well-deserved.”

The IEEE award consists of a plaque, certificate and a $2,000 honorarium. The award will be presented in June at the IEEE Computer Society’s annual awards ceremony in Atlanta.

Three students from UVA’s Darden School of Business are among the top 10 finalist teams in Morgan Stanley’s annual Sustainable Investing Challenge, an international graduate school competition that invites students to present strategies that use finance and investment tools to address an environmental or societal challenge.

Darden students Andrea Barrios, Samuel Chen and Diego Oliveira developed a strategy to reduce the incidence of HIV/AIDS in the U.S. through a pay-for-patient-performance program. The strategy is intended to increase viral suppression in patients, significantly reduce costs to health care and public payers and keep patients in treatment.

Hosted by Morgan Stanley’s Institute for Sustainable Investing, the finals of the competition will take place April 15 in Hong Kong, before a panel of judges. This year, more than 340 students from 64 schools in 21 different countries submitted proposals for the competition.

For the second consecutive year, the UVA Medical Center has been honored by Becker’s Hospital Review among “100 hospitals and health systems with great women’s health programs.”

“These hospitals offer award-winning care to women in a variety of specialties, including gynecology, obstetrics, women-focused heart care and women-focused cancer care,” according to Becker’s introduction of the list of awardees.

“This award is a tribute to the breadth of specialized care for women that we provide throughout Central Virginia and beyond,” said Karin League, associate chief for UVA Children’s Hospital and women’s health.

UVA’s services for women include the Midlife Health Center, which specializes in caring for women 40 and older, and Club Red, a women’s heart-health initiative to educate women about how to reduce their risk for heart disease. UVA has also added midwives to its staff – nurse practitioners who specialize in primary care and reproductive health, along with caring for newborns and women during pregnancy, birth and after giving birth.

To qualify for the designation, UVA completed a rigorous self-assessment and verification packet, fulfilling criteria aimed at improving the chances that anyone suffering a sudden cardiac arrest on Grounds will have the best possible chance for survival. This award in part recognizes UVA’s successful installation of more than 200 automated external defibrillators across Grounds, and the expansion of its CPR education program.

“Sudden cardiac arrest is the leading cause of death in the United States, and an AED is an effective life-saving treatment that can be administered by almost anyone,” said Dr. Bill Brady, professor of emergency medicine and medical director of the UVA AED program. “We are proud of our accomplishments at the University and also proud to serve as a model and resource for other colleges and universities across the country that seek to develop AED programs.”

Prior to 2007, there was very little research on AED placement on college campuses. In response, UVA researchers published an article in the American Journal of Emergency Medicine that continues to provide the industry standard for developing public-access defibrillation programs in the higher education setting.

The AED initiative at UVA is made possible by a regional partnership between UVA Health System’s Life Support Learning Center, the Charlottesville-Albemarle Rescue Squad, the Charlottesville Fire Department and the UVA Office of Safety and Emergency Preparedness, which administers the program.

Craig Volden, a professor in UVA’s Batten School of Leadership and Public Policy, and Vanderbilt University colleague Alan Wiseman have received a $200,000 grant from The Madison Initiative to expand their groundbreaking Legislative Effectiveness Project.

Madison Initiative grants assist projects that strengthen representative democracy in the United States and improve the ways in which national institutions work for the American people.

The Legislative Effectiveness Project – a non-partisan, objective and data-intensive research initiative ­– studies the House of Representatives from 1973 to 2014, assessing each member according his or her lawmaking effectiveness. Using a scoring system, Volden and Wiseman rank each elected official according to his or her ability to advance law through the legislative process. They argue that legislators vary in their effectiveness at lawmaking and that these differences are measureable.

“We see [the research] as playing a critical role in reshaping both the scholarly and broader public debate about the role and contributions of individual legislators and the health of the institution as a whole,” said Daniel Stid, director of The Madison Initiative.

With the new round of funding, Volden and Wiseman said they intend to broaden the scope of their work to include the U.S House of Representatives from the most recent Congressional sessions (2013-14 and 2015-16) and U.S. senators from 1974 to 2013.

David Leblang, J. Wilson Newman Professor of Governance and chair of UVA’s politics department, has been selected to receive the 2016 Society for Women in International Political Economy Mentoring Award.

The Society for Women in International Economy is a part of the International Studies Association. Every year, it bestows an award on women and men who have selflessly contributed to improving the role of women in the international political economy. Leblang was nominated because of his efforts to raise the profile of women in his field.

College Magazine recently endeavored to rank the nation’s top female college a capella groups, and named UVA’s Sil’hooettes as No. 1.

“If you want to talk about award-winning a cappella groups, it would be impossible to do so without spending hours raving about The Sil’hooettes,” the magazine wrote in a February Internet posting. “From performing at the White House to racking up 19 [Contemporary A Cappella Recording Awards] and opening up for B.o.B and Ben Folds, this group has done what other groups can only wish to accomplish since forming in 1989.”

The group’s latest CD, “Luster,” released in December, was nominated for Best Female Collegiate Album, one of four CARA nominations that will be decided April 9.