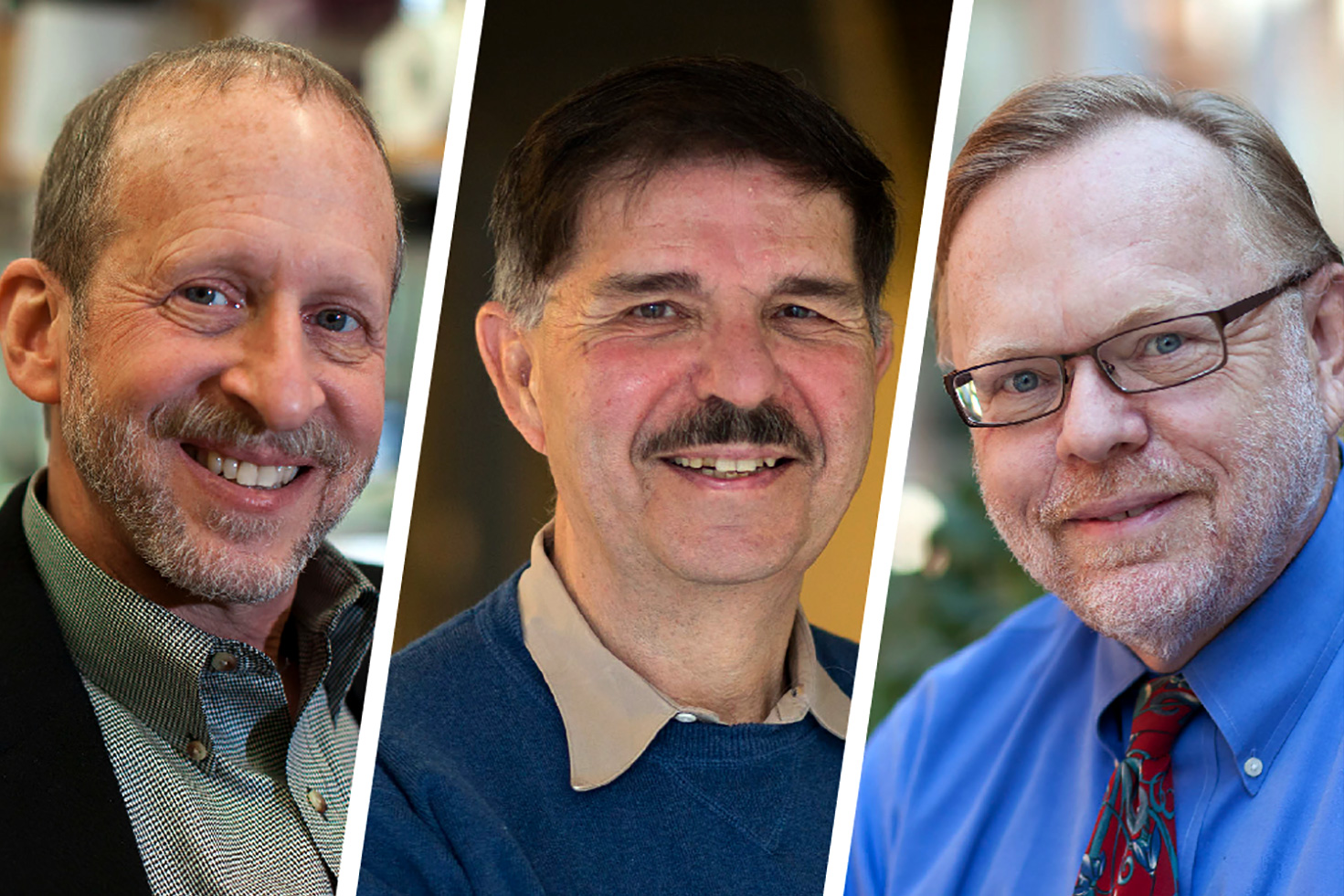 University of Virginia biologist George Bloom, cell biologist David Brautigan and physicist Brad Cox are 2016 fellows of the American Association for the Advancement of Science. Election as an AAAS Fellow is an honor bestowed upon association members by their peers.

The tradition of AAAS Fellows began in 1874 and is considered a prestigious distinction among scientists. This year, 391 of the 10 million-member organization – the world’s largest general scientific society – have earned this honor for their scientifically or socially distinguished efforts to advance science. Members earn the rank of fellow after a nomination process by their peers within their fields or by selection of AAAS’s chief executive officer.

AAAS will honor the new fellows Feb. 10 during its annual meeting, held this year in Boston. Each will receive a certificate and rosette pin.

Based on consumer surveys of quality and image, the UVA Health System received a 2016-17 Consumer Choice Award from the National Research Corporation, an organization dedicated to promoting patient-centered health care.

This year’s winners were determined by surveys of more than 300,000 households in the 48 mainland U.S. states and the District of Columbia. According to the National Research Corporation’s website, winners of the Consumer Choice Award are seen by consumers “as having the best doctors, best nurses, best image and reputation, and best overall quality in their respective markets.”

“Every day, our team of highly skilled and compassionate professionals look for new ways to provide innovative and superlative care to our patients, their loved ones and visitors, and this award recognizes that effort,” she said.

The Boar’s Head resort, owned and operated by the University of Virginia Foundation, earned the 2016 Sustainability Champion Award of Excellence from the Historic Hotels of America.

The Sustainability Champion Award of Excellence is presented to a hotel that best implements and practices innovative green initiatives and programs. From a field of more than 200 hoteliers from around the world, the award committee selected Boar’s Head – established on a 573-acre country estate in 1834 – as one of six finalists in its category, along with The Willard InterContinental in Washington, D.C., and Hilton Chicago, among others.

On Nov. 3, Boars Head was announced the winner of the Sustainability Champion Award at an event in Oahu, Hawaii.

“It’s an honor to receive this prestigious award as it reflects our dedication to sustainability,” said Boar’s Head’s general manager, Matt Harris, who joined the resort in 2009. “Our current green initiatives are numerous and ambitious, from single-stream recycling and waste reduction to water and energy conservation (to name just a few). We’re also proud that our Birdwood Golf Course is a Certified Sanctuary member of the Audubon Cooperative Sanctuary Program.”

Historic Hotels of America previously presented Boar’s Head with a 2012 Best Practices & Special Acknowledgments Award for its work on a variety of preservation-sensitive improvement projects – most notably, its “Goatbusters Project,” which used grazing goats to restore and beautify an area between the resort’s Birdwood Mansion and Birdwood Golf Course. The animals provided a cost-effective, environmentally friendly method of landscaping that reflected traditional methodologies from a bygone era.

These measures and many others have enabled Boar’s Head to be certified Virginia Green, which supports environmentally friendly practices throughout the state’s tourism industry.

“I’m thrilled to see our team at UVA receive this national honor for our work to provide excellent, comprehensive care to patients throughout the region,” said Dr. Bobby Chhabra, chair of UVA’s Department of Orthopedic Surgery.

According to Becker’s, “the hospitals included on this list are national leaders in orthopedic care. They have received recognition for excellence from various publications, industry-leading organizations and accrediting organizations.”

In highlighting UVA Orthopedics, Becker’s recognized UVA’s designation as a Level I trauma center and its “one-of-a kind in Virginia” hand center. “[UVA’s] orthopedic surgery department treats a full range of conditions at its pediatric orthopedic clinic, spine center, musculoskeletal center and sports medicine clinic,” according to the publication.

The Charlottesville-based Sexual Assault Resource Agency honored the forensic nurse examiner team at the UVA Medical Center Center with its 2016 Annette DeGregoria Grimm Award. Named for one of SARA’s executive directors, the award honors “an ordinary citizen or professional who has made extraordinary contributions to the elimination of sexual violence in our community.”

For meeting standards to provide high-quality patient care, the UVA Health System has been designated a National Pancreas Foundation Center for the treatment of pancreatitis. UVA is the only NPF Pancreatitis Center in Virginia.

According to the foundation, NPF Centers “focus on multidisciplinary treatment of pancreatitis, treating the ‘whole patient’ with a focus on the best possible outcomes and an improved quality of life.”

To become an NPF Center, UVA underwent an extensive audit of its patient care, demonstrating that it meets criteria developed by patient advocates and pancreatitis experts.

A.E. Dick Howard, White Burkett Miller Professor of Law and Public Affairs, became the 16th recipient of the Madison Family Cup on Nov. 5. The National Society of the Madison Family Descendants gives the award annually in recognition of an individual or organization making a significant contribution to the support of James Madison’s Montpelier and its educational, historical, restoration and conservation programs.

As Howard was unable to attend the presentation during the Hunt Breakfast at the 82nd Running of the Montpelier Hunt Races, his nephew, Thomas Howard, delivered his remarks.

“Through my professional and academic career, my life has been intertwined with James Madison,” Howard’s remarks read. “In my career in the classroom, I have striven to nurture my students’ appreciation, not only for today’s constitutional arguments, but for the enduring significance of the foundation laid by James Madison.”

Gail Babnew, a society member who presented the Cup, said that Howard’s “scholarly contributions and his governmental career have consistently embraced the spirit of the constitutional legacy of President Madison. He has long championed Montpelier as the Center for the Constitution.”

Howard served for five years on the Property Council of the National Trust and for more than 10 years on the board of The Montpelier Foundation.

A public health nurse for more than four decades, Kulbok’s 25 years at UVA have been marked by distinction through teaching, research and clinical work. She has studied adolescent health behavior related to tobacco, alcohol and drug prevention. A Robert Wood Johnson Executive Nurse Fellow and former department chair, Kulbok helped develop the School of Nursing’s Doctor of Nursing Practice program.