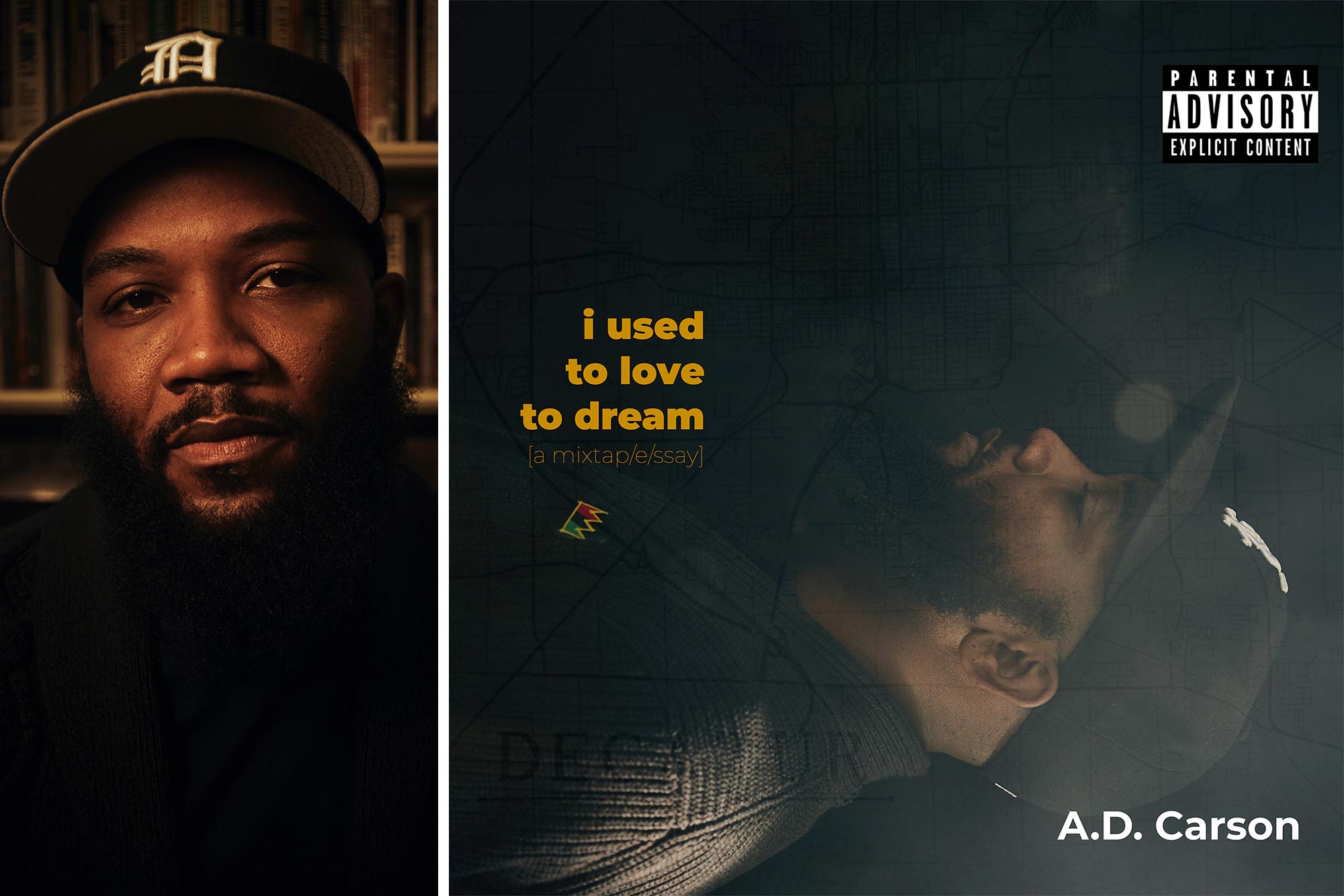 Three years after releasing an album as his Ph.D. dissertation, University of Virginia professor of hip-hop A.D. Carson has released the first peer-reviewed rap album ever published by an academic press.

The album, “i used to love to dream,” released this summer by the University of Michigan Press, is the third album in Carson’s “Sleepwalking” series. It explores Carson’s hometown, Decatur, Illinois, and its effect on him as his career has taken off and taken him further from where he grew up, including to Clemson University, where he earned his Ph.D., and now to UVA and Charlottesville, where he is the assistant professor of hip-hop and the global south in the McIntire Department of Music.

“We bring all of our experiences to wherever we are at the moment; that is a great thing that memory does for us, and music connects us to those memories, but they are just memories,” Carson said. “I am not the person I was when I lived in Decatur, or when I lived in South Carolina, but I bring all of that to where I am now, and what I do now.”

At times, Carson said, he has struggled with being too far away to advocate for local change in Decatur, which, he notes was recently ranked No. 7 on a list of worst cities for Black Americans. He felt like both an insider and outsider, having grown up there but moved away. He was still seeing some of the same problems, the same racism play out in Clemson, where he was part of a group fighting “against racism and discrimination on campus, lacks in diversity and inclusion efforts and the university misrepresenting its history and present by whitewashing the horrendous legacies of white supremacists, slaveholders and segregationists like Benjamin Tillman and John C. Calhoun, whose names appear on campus buildings,” Carson said; and in Charlottesville, where he moved just before the Aug. 2017 “Unite the Right” white supremacist rallies.

Second trailer for A.D. Carson's 'I Used to Love to Dream.' Mixtap/e/ssay coming Spring 2021 from U-M Press, but keep an eye out for some sneak peeks...

Posted by University of Michigan Press on Tuesday, May 19, 2020

Carson grappled with those feelings even as he built a career at UVA, working and teaching with students who have come to love his courses and his Rap Lab, where they compose tracks and mixtapes together. One highlight came last summer, when Carson and fellow faculty members Noel Lobley and James Igoe took a group of students to South Africa, where they collaborated with South African scholars, musicians and radio stations and attended and performed at the National Arts Festival in Makhanda, South Africa, one of the largest performing arts festivals in the world.

Before and during the trip, Carson said he kept thinking about the tension between a career he was enjoying and work he had dreamed of doing, and feelings of disconnection and despair about his hometown, and about persistent, pernicious inequities that marked Decatur and places like it.

“I started going to therapy, writing, trying to get at some of those questions, and I realized, right before I left for South Africa, that I had a bunch of songs that were all doing similar work,” Carson said. “I didn’t know if it was an album. I just knew that it was something.”

In South Africa, Carson was scheduled to give several performances at the National Arts Festival, one of which he used as a listening session, sharing songs that he had worked on, getting feedback and discussing what he was trying to do. Some of the songs he shared deal with that feeling of being between homes, like “ampersand,” while others, like “just in case,” address issues of racism and police brutality. Carson wrote “just in case” as a private reflection after a young man was killed by police in South Carolina while Carson was studying at Clemson. It is structured as a letter to his loved ones, in case he was to be killed by police, and it is sadly just as relevant now, in the summer after George Floyd’s death in Minneapolis.

In South Africa, Carson’s peers, students and listeners shared positive feedback, and he realized he was ready to record an album.

“I knew, by the time I came back, that I had an album on my hands,” he said. “I picked up the conversation with the people at Michigan [Press], and we were talking about the fact that no academic publisher had released a peer-reviewed rap album – had recognized a rap album as academic output, as scholarship.”

Carson and Michigan editors decided to put the album, and an associated short film, digital book and album notes, through the peer review process, which includes the prospective publisher sending all of the materials to anonymous scholars in related fields, who put together reports and recommendations for Carson to review and incorporate into the final work, if offered a contract.

“It is a bit different from the hip-hop peer-review process, which I am constantly engaged in with my artistic peers, as we give and get feedback all the time,” Carson said. “I was apprehensive at first, as I have had experience with people commenting on everything but the content of my work, or not taking it seriously as scholarship, but I was pleased to have reviewers who were thoughtful and considerate, who really engaged with the work and had great feedback.”

The album is available on the University of Michigan’s Fulcrum platform, and the playlist is available from Bandcamp for free, with the option to donate to a fund for aspiring musicians in Decatur. Proceeds from a forthcoming, limited-edition vinyl LP will go to the same cause.

With the album published, Carson is now spending most of his time preparing for his fall courses. He is teaching “Writing Rap,” and “The ‘Black Voice,’” both being held virtually. His spring 2020 course, “Composing Mixtapes,” shifted online in March, as all UVA courses did after the COVID-19 pandemic hit. Students composed an album for their final project and, working together as a class, finished the whole thing virtually.

“In a strange way, going online really brought the class together,” Carson said. “It was really important to them that they finish what they started.”

Students came up with ways to borrow recording equipment, met for planning and recording sessions via videoconference and ultimately produced an album, which they called “Isolate,” about the whole strange experience. They even marketed the album, donating proceeds to charities helping those most affected by the pandemic in Charlottesville.

“I’m really proud of the direction they took their work in after going online,” Carson said. “They were really thoughtful and considerate, and made sure it was the best it could be, given the circumstances.”