After Eschewing the NBA Draft, Hunter Says He’s Ready to Take on a Larger Role 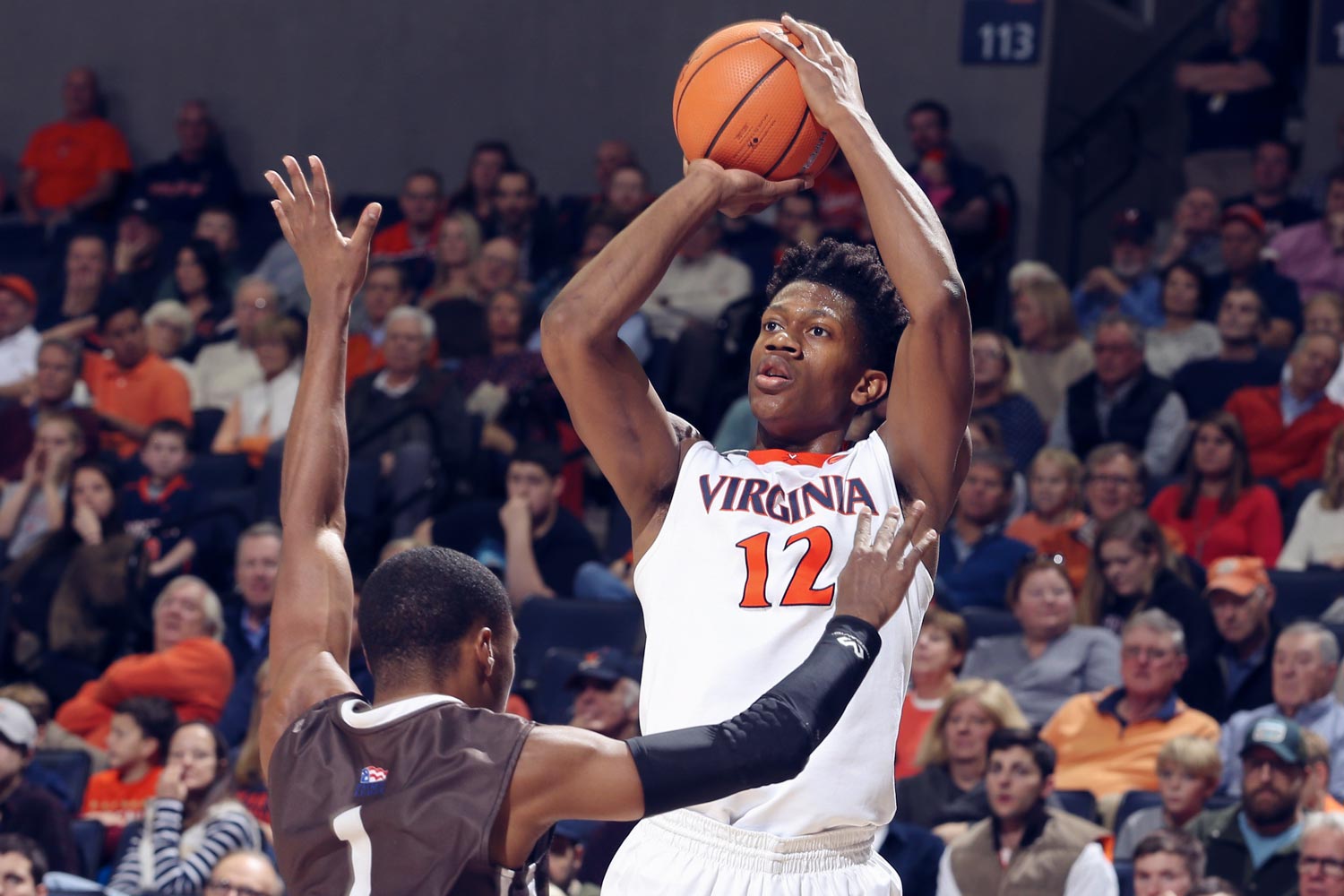 Some NBA observers thought De’Andre Hunter might be worthy of a first-round pick in this year’s NBA draft, but he opted to stay at UVA for at least another season. (Photo by Matt Riley, UVA Athletics)

There was no news release, no press conference, only the one-sentence message De’Andre Hunter posted on Twitter at 1:15 p.m. on April 20.

After much consideration, I have decided to return to school and not enter my name in the 2018 draft.

Those 19 words prompted jubilation among anxious University of Virginia men’s basketball fans. To Hunter, the Atlantic Coast Conference’s Sixth Man of the Year in 2017-18, it wasn’t that big a deal.

“I never really was thinking about going to the NBA,” the soft-spoken Hunter said last week at John Paul Jones Arena, “but I felt like I had to put that out to tell people and have them know.

“I didn’t want to make it a big thing, because honestly it wasn’t. I don’t like a lot of attention on me, and I just tried to put out that tweet and leave it at that.”

A 6-foot-7, 222-pound forward from Philadelphia, Hunter did not start any games for the Cavaliers as a redshirt freshman in 2017-18, when he averaged 9.2 points and 3.3 rebounds per game. As the season progressed, however, his role grew, and his name began appearing on NBA mock drafts. Many of them projected him as a first-round pick.

“I was trying not to pay it any mind, really,” said Hunter, a graduate of Friends’ Central School in Philadelphia.

“Honestly, I don’t think I was good enough to play in the NBA. I feel like I’m a good player, but I could take another year and get a lot better here and make a real impact in my rookie season [in the NBA].”

His 2017-18 season ended prematurely. In the semifinals of the ACC Tournament, Hunter fell on his left wrist after being hit on a dunk attempt in UVA’s 64-58 win over Clemson University at Barclays Center. The result was a broken wrist that left the right-handed Hunter in severe pain as the title game approached the next night in Brooklyn, N.Y.

“In my head, I was like, ‘I have to play, because it’s the ACC championship,’” he recalled. “But honestly, I didn’t think I was going to play. It hurt when they were just passing me the ball.”

Hunter played through the injury and helped top-seeded UVA secure the program’s third ACC championship. He hit six of eight free throws in the final minutes to seal Virginia’s 71-63 victory over the University of North Carolina and finished with 10 points.

He also grabbed four rebounds, the last coming with five seconds left, after which he triumphantly dribbled out the clock.

Less than 24 hours later, Virginia was awarded the No. 1 overall seed in the NCAA Tournament, but Hunter’s pain had not eased.

When he went to see Dr. Bobby Chhabra, an orthopedic surgeon at the UVA Hand Center, “I didn’t want to think negatively, but I was in so much pain, I knew it wasn’t just a regular sprain,” Hunter recalled. “I tried to think positively, but I knew that there was something seriously wrong with it.”

Further testing revealed that Hunter’s injury was too serious for him to continue playing. Surgery was required, and UVA announced on March 13 that his season was over.

“It was tough,” Hunter said.

With Hunter watching from the bench, Virginia became the first No. 1 seed in NCAA Tournament history to lose to a No. 16 seed. The University of Maryland-Baltimore County stunned UVA, 74-54, in a first-round game in Charlotte, N.C.

Would a healthy Hunter have changed that outcome? It’s impossible to know. But UMBC head coach Ryan Odom, in his postgame comments, noted that “Hunter is a big, big player for them.”

Ten games into the season, Hunter was averaging only 14.6 minutes per contest. In 17 of the next 23 games, however, he played at least 20 minutes, and stellar performances became the norm for him against ACC foes.

“It’s crazy,” Hunter said of his rise to prominence. “I’m not going to say I didn’t expect it so soon, but honestly I didn’t. I knew I was going to be a good player in college, but it’s just crazy to see how everything unfolded. I’m just blessed.”

His personal goals for the coming season?

“Just take it to the next level in every aspect,” said Hunter, an American studies major. “I had a great end to the season last year. I want to maintain [a high level of play] throughout a whole season this year, try to stay away from injuries and become more of a leader for this team.”

Coming into last season, “I wasn’t really expected to do a lot,” Hunter said, “which would be the opposite of this upcoming year. I’ll be expected to do a lot and have high expectations from many people. … It’ll be a lot different, but I’ll be prepared.”

Head coach Tony Bennett used Hunter at small forward and power forward last season, and that’ll be the plan in 2018-19, too.

“I think that really helps our offense,” Hunter said. “We have talented guys, guys that can score, and if you just add another guy on the floor who can space the floor and shoot it and do everything, it just helps the team a lot.”

Hunter struggled with his outside shot early last season, but in ACC games he made 47.1 percent of his 3-point attempts.

“I kind of found a groove toward the end of the year with my shooting,” Hunter said. “I just want to maintain that throughout an entire season. With my ballhandling, I realize I need that if I want to make it to the next level. I’m just working on that and just trying to be as comfortable with the ball as possible.”

With a 7-2 wingspan and excellent athleticism, Hunter is able to defend multiple positions. That’s another reason he’s so attractive to NBA teams.

“Versatility has always been the biggest strength of my game,” Hunter said. “Just seeing the way the NBA is trending, with guys like a Draymond Green or a Jayson Tatum, who can play the three, the four [on offense] and can guard the two and the one, it just really helps programs, and they really value that now.”

Hunter will be a centerpiece of what should be another strong UVA team. In 2017-18, the Wahoos swept the ACC’s regular-season and tournament titles and, at 31-3, set a school record for victories in a season.

“That was just such a great team to be a part of,” Hunter said. “Just the way it ended, I just felt like it doesn’t do justice to our season.”

UVA lost three seniors (Devon Hall, Isaiah Wilkins and Nigel Johnson) from that team, but back are such players as Hunter, Kyle Guy, Ty Jerome, Mamadi Diakite, Jack Salt, Jay Huff and Marco Anthony, plus Francesco Badocchi, who redshirted in 2017-18.

Hunter likes what he’s seeing from the team this summer in practices, workouts and pickup games.

“Of course we’re going to play defense,” he said, “and we have a lot of offensive pieces as well.”

The NBA draft was held June 21, and Oklahoma City selected Hall, a 6-5 guard, in the second round. As Hunter followed the draft, it occurred to him that his day was coming.

“I was just watching the guys get picked, and I was like, ‘That could be me in a couple of years,’” Hunter said. “I was just real excited.”

That he elected to postpone that moment, Hunter was reminded, delighted UVA fans.

In Memoriam: Life of Drama Professor To Be Honored Sunday END_OF_DOCUMENT_TOKEN_TO_BE_REPLACED