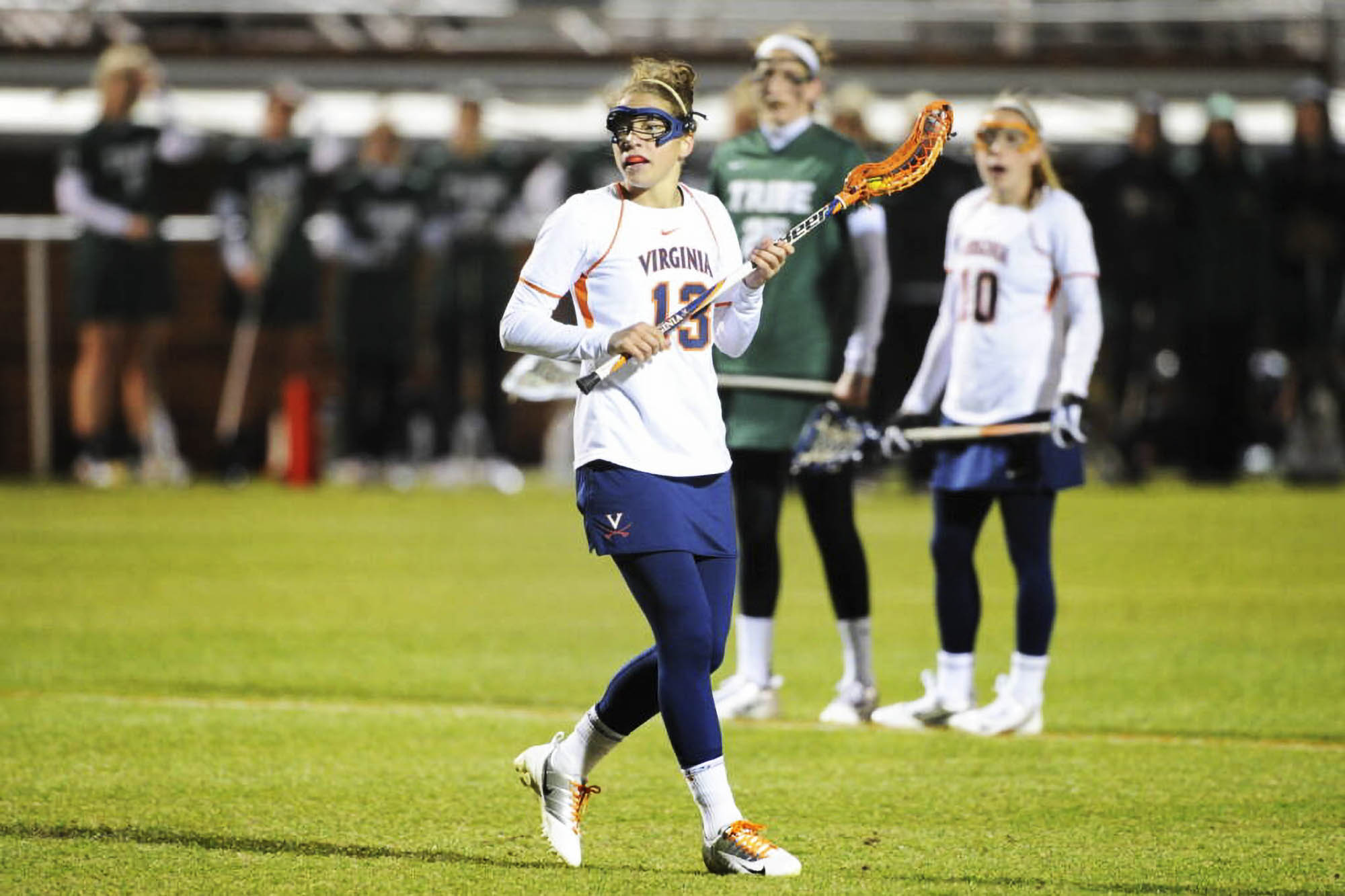 She’d been asking the University of Virginia video services department for a chance to demonstrate her broadcasting skills, and the opportunity finally came on Feb. 28, 2018.

On something of a test run, Dana Boyle was assigned the role of analyst for a digital production of the UVA-William & Mary women’s lacrosse game at Klöckner Stadium.

“I was terrible,” Boyle recalled with a laugh.

However unsteady her ACC Network Extra debut might have been, her producers saw promise in Boyle, a former UVA midfielder, and more assignments followed. Three years later, she’s a regular on ACC Network and ESPNU broadcasts of women’s lacrosse.

Boyle, an assistant director of stewardship and donor relations in UVA’s School of Engineering and Applied Science, also hosts a new weekly interview series, titled “No Boundaries,” for U.S. Lacrosse.

“I feel like I have my hand in so much,” said Boyle, who has two degrees from the University.

Boyle, who grew up in Londonderry, New Hampshire, joined head coach Julie Myers’ program at Virginia in 2010. She was named to the All-ACC team in 2013, but injuries marred her college career, and Boyle stopped playing after her fourth season, though she had another year of eligibility.

“It just wouldn’t have worked with my grad program,” said Boyle, who earned a master’s in higher education in 2015 from UVA’s School of Education and Human Development. “Julie was understanding, and I was like, ‘I’m still going to be around. I’m not going anywhere.’”

After her first year at UVA, Boyle went home to New Hampshire for the summer. In subsequent summers, however, she worked in the McCue Center as an assistant to Gerry Capone, the Cavaliers’ longtime associate athletic director for football administration. In that role, Boyle also met Luke Goldstein, UVA’s assistant athletic director for video services, with whose family she became close.

Boyle, who has a bachelor’s degree in sociology, credits Capone, Goldstein and Mike Szlamowicz, UVA’s director of video services for live events and ACC Network, for helping launch her career in broadcasting.

“I don’t know how I got roped in with these crazy people,” Boyle said, laughing, “but in all seriousness, they have done so much for me.”

After earning her master’s degree in 2015, Boyle spent a year in the Dallas area, where she worked in events and ticketing for the College Football Playoff.

“That was awesome,” Boyle said. “It was such a cool experience to be at the very top of football and work in that industry, but I was like, ‘I love it, but I don’t know if I could make a career out of this,’ and I knew I wanted to come back to Charlottesville.”

She started working as a stewardship coordinator for the Virginia Athletics Foundation in the summer of 2016, a job she held for two years. She accepted a similar position at UVA Engineering in August 2018, and that gave her more time to pursue other interests. Her supervisor is fellow UVA alumna Anna Hodges.

“I feel really supported by Anna, who recognizes that I love both – working for my alma mater and staying involved in the sport that was responsible for getting me to UVA,” Boyle said. “My colleagues at UVA Engineering have been really flexible and accommodating, allowing me to juggle both roles in the spring, and I am so thankful for that.”

Boyle said she loved her time at the Virginia Athletics Foundation, “but I was just like, ‘I can’t do everything, and something has to give.’ I wasn’t willing to give up coaching or broadcasting, and so I had to find something that was more accommodating. I worked every weekend when I was at VAF.”

She coached girls’ lacrosse at nearby Western Albemarle High School for several years. In 2019, Boyle’s final season as varsity head coach, the Warriors advanced to the 4A state championship game.

“I miss it so much,” Boyle said. “Unfortunately, I had to let coaching go so I could broadcast. I wish I could do it all, but I can’t. Coaching at the high school level is special, and to be in a leadership role working with so many young women and that interaction and opportunity for growth is what I miss the most. As much as I hope I taught them something about life or lacrosse, they absolutely taught me even more.”

The ACC Network launched in August 2019. A recommendation from Szlamowicz to Amy Rosenfeld, head of production for ACC Network, opened a crucial door for Boyle.

“They were looking for lacrosse people,” she said, “and they asked for my highlight reel. I didn’t even have a highlight reel, so I had to make one.”

Boyle made her live television debut on ACC Network on March 5, 2020, providing analysis for the North Carolina-Louisville game in Chapel Hill. “And then a week later, the whole world shut down,” she said.

The COVID-19 pandemic has changed the way many broadcasters do their jobs. In years past, ESPN announcers would travel to game sites for broadcasts.

For Boyle and her partners on ACC Network and ESPNU broadcasts, “everything is remote,” she said. “Basically, in the back of this computer I have a monitor, a camera, a light. ESPN sent me everything, and then they helped me connect it all, and somehow I get on the broadcast and I’m in the game.”

She’s teamed with play-by-play announcers who were “in Florida, Chicago, all over the place,” said Boyle, who still does the occasional ACC Network Extra game. “So it’s wild how it works.”

For her interview series, Boyle said, “I’m just doing a short clip to find out who these players are off the field. When we’re calling games, we’re talking about stats and we throw in some storylines, but everybody has a story, and it’s interesting for people to get to know the players outside the confines of the lacrosse field.”

Boyle looks back at her UVA career fondly. “Obviously, when you’re in it and you’re injured, it’s hard, it’s a grind,” she said. “But I wish I could go back, because it was so much fun.”

In 2014, her final season with the Wahoos, they advanced to the NCAA semifinals.

“I wasn’t playing, because I was injured and recovering from that second surgery,” Boyle said, “but to go to the Final Four, that’s your goal as an athlete, to win a national championship, and we were so close. So just to be a part of that, the culture and the excitement, was amazing. Those are still my best friends. We’re all still in touch, and even after you’re removed from the program, you’re never really removed, because you have so many friends and colleagues.”

Boyle might be her own harshest critic. Producers at ESPN offer feedback after her broadcasts, she said, “but truly the best way to learn is to go back and listen to yourself or watch yourself, and it is so painful. I’m like, ‘Why did I say that? I am educated, and I have a master’s degree, and that wasn’t English.’ And I have to literally sit on my hands when I’m on camera, so I don’t have my hands waving in front of the camera when I’m talking.”

It’s all part of her ongoing education as a broadcaster.

“It took a lot of people to get me there, and I’m not there yet,” Boyle said. “I’ve got a long way to go. But it’s been really rewarding, and I’m so thankful for my time at Virginia and the fact that I’m still a part of the community. There have been a dozen people, if not more, that have supported me, helped me, said my name in a conversation when that might not have otherwise come up, and so I couldn’t be here without all of them.”