Alumnus Captures Another Stunning Lawn Photo. This One Includes the Milky Way. 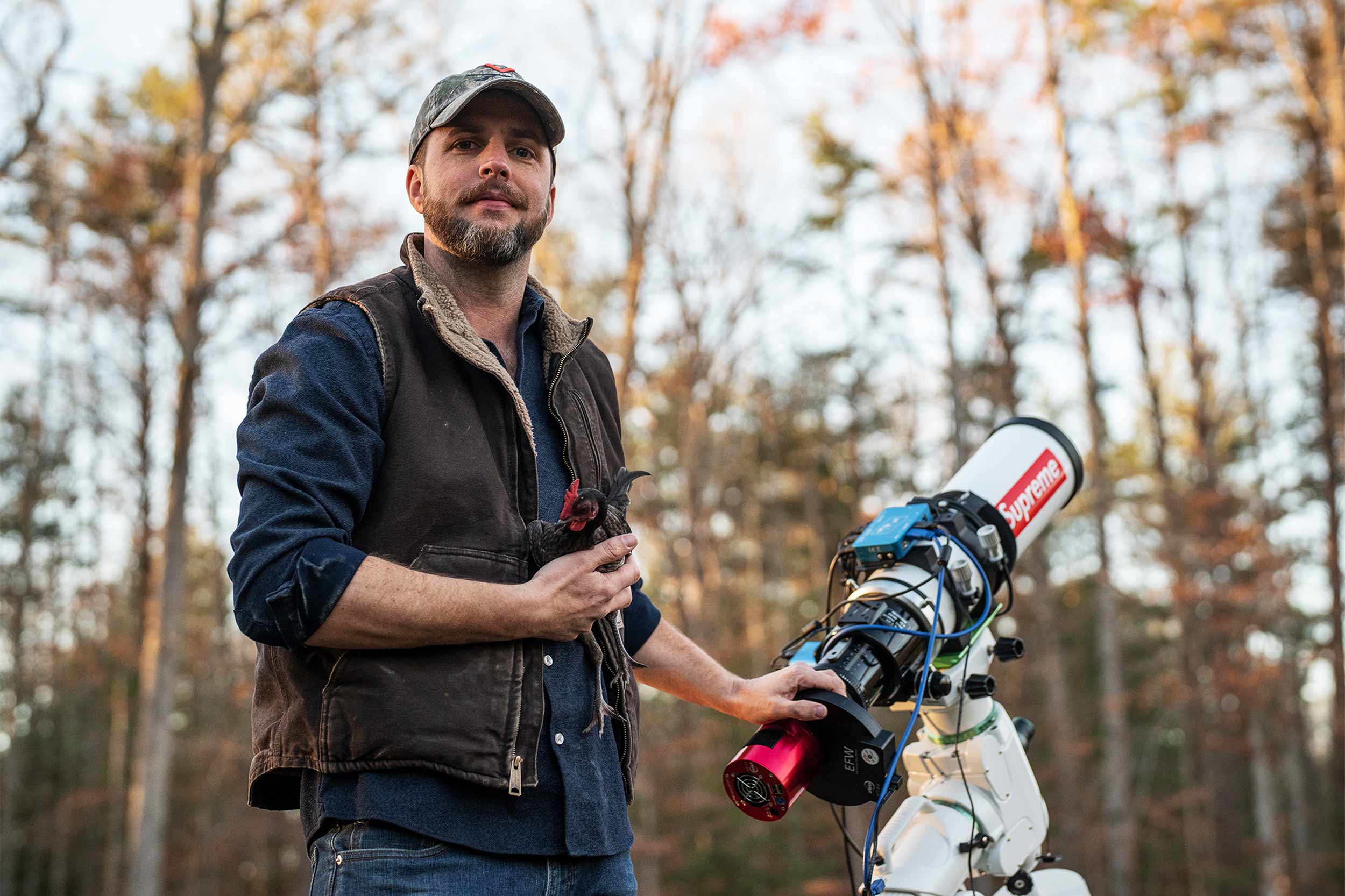 Brennan Gilmore typically heads out to the quiet country for his astrophotography. His latest project, however, brought him back to Grounds during an eventful evening. (Photo by Sanjay Suchak, University Communications)

Over the three nights Brennan Gilmore stood on the Lawn last summer to take the 124 photos necessary to piece together his unparalleled mosaic of the Rotunda, the University of Virginia alumnus said he worked alone.

“I don’t think I saw a single person that entire time,” he said.

A quiet setting typically accompanies Gilmore, an astrophotographer, when he’s in midst of capturing the next scene to add to his breathtaking portfolio.

“A lot of times,” he said, “I’m way out in the country and you can’t hear anything except coyotes and bugs.”

Suffice to say, the atmosphere Gilmore shot in last week to create another one-of-a-kind landscape was among the most uncommon of his career.

Forget focusing among coyote howls and cricket chirps, and try lining up the Milky Way’s core over Old Cabell Hall – during an a cappella concert. 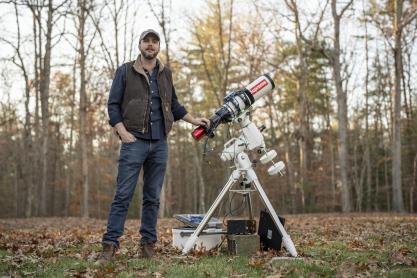 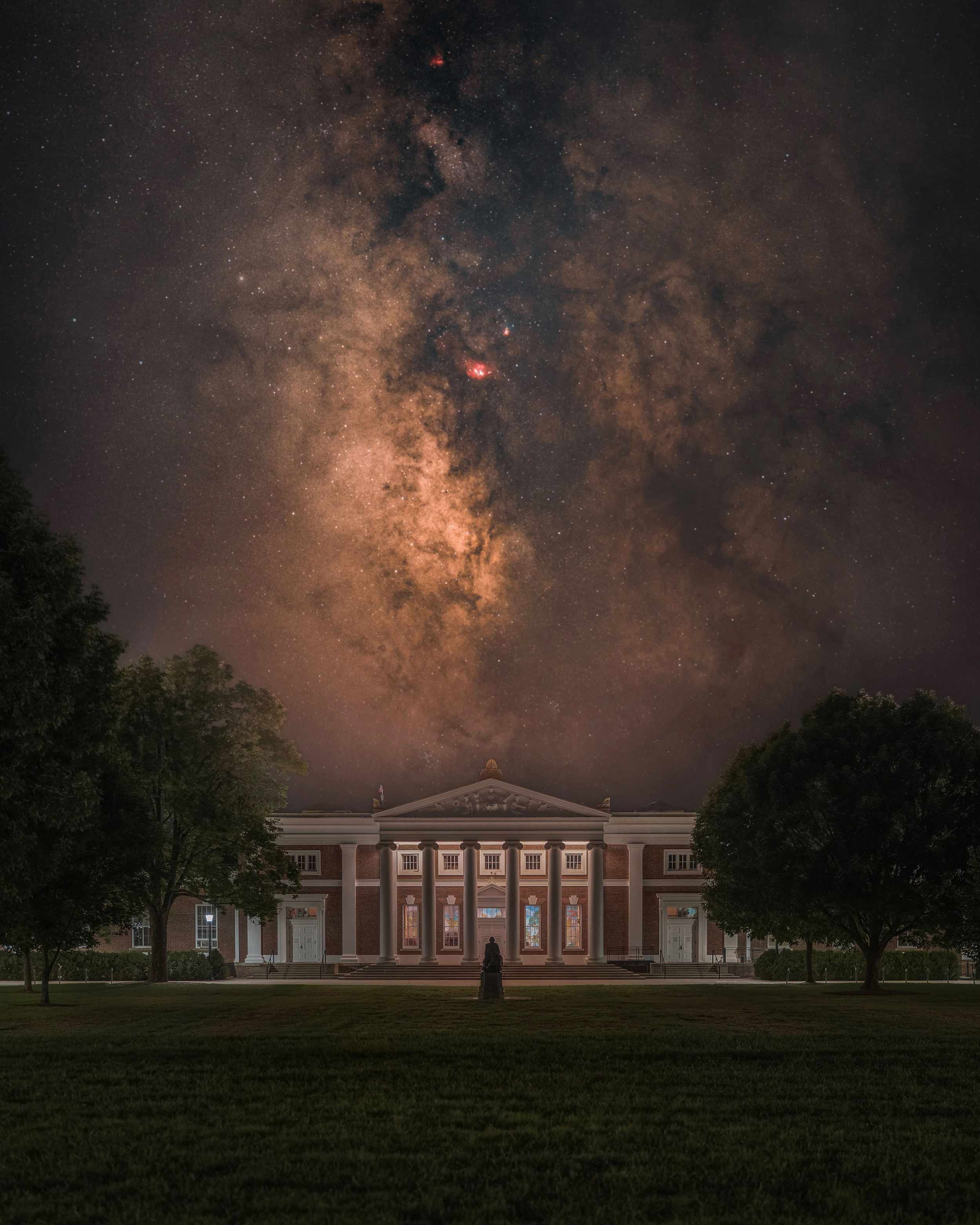 After four hours on the Lawn and several more on his computer, Gilmore pieced together this unique mosaic of an iconic spot at UVA. (Photo by Brennan Gilmore)

Yes, Rotunda Sing, a UVA tradition that brings together the University’s a cappella groups for a Lawn performance during the first week of fall semester, provided the soundtrack to Gilmore’s latest photo shoot on Grounds.

“This is kind of surreal,” Gilmore said from South Lawn as he peered into his camera’s viewfinder. Well behind him, the Flying Virginians covered The Who’s “I Can See for Miles” at the Rotunda’s base. A reverb was present.

The concert just happened to take place under clear skies, the conditions Gilmore, over the course of a couple weeks in August, had been waiting for to attempt his shoot.

The final product – as seen in the main photo of this story – proved Gilmore wasn’t distracted by the music, nor the students roaming the Lawn (he reported no streakers, despite being out there from 8 p.m. to midnight).

He set out to capture the Milky Way’s galactic center – the star-crowded middle of our home galaxy – over an iconic UVA building, and he did just that, said Steven Majewski, an astronomy professor at the University whose research includes galactic structure and kinematics, and especially the stellar populations and evolution of the Milky Way.

“I love this image because it is an intriguing representation of our place in the cosmos,” Majewski said. “Old Cabell Hall, a familiar local center of human thought, is rendered against the starry center of our vast, home galaxy, the Milky Way.

“One wonders how many other centers of consciousness and thought may lie among the hundreds of billions of other star systems in our galaxy.”

Gilmore, who graduated from the University in 2001 with an international relations and affairs degree, was first introduced to the UVA Today audience last year with a story detailing how he produced an image that featured the Rotunda below the Heart and Soul Nebulae.

The process to create a second cosmic Lawn image was similar to Gilmore’s first attempt. He arrived on Grounds heavily laden with equipment – a couple tripods, a couple cameras, a few different filters, a telescope, an equatorial mount, a lens warmer, a laptop and a phone loaded with specific applications to track the sky.

UVA Today tagged along for much of Gilmore’s shoot, which was jump-started by a key positioning of his mount – or “star tacker,” as he called it.

“Because I'm taking hour-long exposures, if I open the shutter for a long time, without turning the camera with the rotation of the Earth, the stars will appear as just streaks,” Gilmore said. “So to keep the stars sharp, this thing has fine gears in it, which will turn at what they call ‘the sidereal rate,’ which is the same speed as the rotation of the Earth, to compensate for it.”

Gilmore, nodding to another piece of equipment, then took things a step further.

“This is actually a small telescope next to the camera I’m using,” he said. “I’m going to hook it up to a computer to find a star near where I’m shooting and then send commands to this box to keep that star right in the crosshairs over several minutes so that everything is very, very sharply focused.”

Gilmore used a 35-millimeter lens for a combined 117 shots of the sky and Old Cabell Hall. He then digitally stitched them together to create the mosaic. Using a tool called “dynamic background extraction” through the PixInsight computer program, he was able to subtract the sky pollution caused by the surrounding city lights and essentially pull the Milky Way more into focus.

“This is not an easy image to capture, because the man-made light in the foreground is much brighter than the diffuse starlight from the Milky Way,” Majewski said. “Brennan has had to use extreme patience and his vast experience in astrophotography to achieve the light balance that allows the Milky Way to be seen despite the glare from Old Cabell Hall and the lights of Charlottesville.”

The noticeable red blobs in the sky, Majewski said, are “regions of intense star formation, stellar nurseries that are glowing a rosy red, which is the color emitted by hot hydrogen gas surrounding the newly forming stars. The brightest red blob in the center of the image is Messier 8, also known as the Lagoon Nebula.”

The project’s completion was a full-circle moment for Gilmore, a bluegrass band leader who took several music classes in Old Cabell Hall as a student.

“I probably spent more time in Cabell than any other building at UVA,” he said. “I know it very, very well.

“So, it’s my home at UVA under my home in the cosmos.”

Gilmore’s work – including the shots of the Rotunda and Old Cabell Hall – is available for sale here. He’s already thinking of the next Grounds scene he wants to capture.

“A snow-covered Lawn with the Orion constellation over it,” he said. “Unfortunately, the shoot won’t take place during a pleasant summer evening. It will likely be very cold and there won’t be any a cappella singers.”