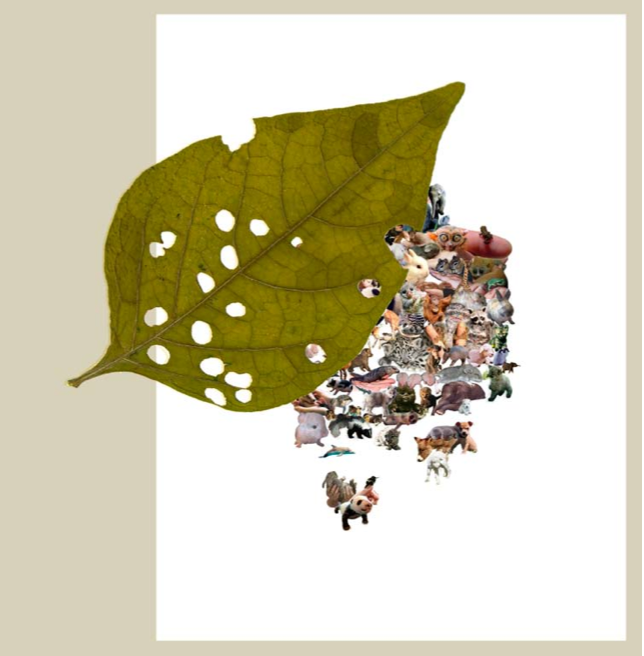 It seems fitting that an artist whose work has included the study of insects using a scanning electron microscope would be the first artist-in-residence at the University of Virginia’s Mountain Lake Biological Station.

Through a collaboration between the College of Arts & Sciences’ Department of Biology and its McIntire Department of Art, Ana Golici, a New York-based artist born in Romania, will be in residence and creating her own work from July 1-22 at Mountain Lake, the field station for U.Va.’s biology department. The station is located in Pembroke, about 20 minutes northwest of Blacksburg.

“By giving me access to a microscope right there in the middle of the wilderness, this residency will help me continue my research into the folding systems of insects wings and the scales on butterfly wings,” Golici said.

“I will be interested in discovering mostly 'invisible things' at the field station, and will also be open to the inspiration of the place. I can't wait to take my first walk through the woods, discover new natural structures and see new insect and plant species.”

On July 7, Golici will present a public lecture titled “Art as Research” at 8 p.m. in the Lewis Hall Auditorium at Mountain Lake.

“Ana Golici’s residency builds on the art department’s ongoing relationship with the biologists at Mountain Lake,” said Howard Singerman, professor and chair of the McIntire Department of Art.

Golici studied graphics at the Institute of Fine Arts Nicolae Grigorescu in Bucharest, and received a Master of Fine Arts degree in printmaking at Hunter College in New York City. She began her career as a fine art printmaker, but later embraced the digital revolution and developed into a digital printmaker.

Golici’s work crosses the boundaries between art and science, and employs a variety of traditional as well as high-tech printmaking skills. Her work has even included the study of insects using a scanning electron microscope at the New York Hall of Science in Queens, N.Y.

She has had a solo exhibition at Adelphi University in New York, and participated in various group shows throughout the New York region. In 2009, Golici was awarded an artist residency at the Corning Glass Museum in Corning, N.Y.

She is a member of the Robert Blackburn Printmaking Workshop, and works from a studio at the Elizabeth Foundation for the Arts in New York City.

“I am very grateful for this opportunity, and am looking forward to a great experience,” Golici said.

Established in 1929, Mountain Lake Biological Station, located on 650 pristine acres at 3,800 feet in elevation, has drawn scientists and students from around the country to conduct research in everything from ecology to evolutionary genetics. The field station includes labs, classrooms, an auditorium, research field sites, a herbarium, insect collections and a dining hall with an outdoor dining porch.

Just as scientists have been doing for more than 80 years, studio artists from the McIntire Department of Art have begun making their way to Mountain Lake to learn and create.

In 2011, guided by U.Va. studio art professor Megan Marlatt, students experienced the inspiration of nature firsthand by spending weeks at the field station. In an intensive drawing course focused on the study of art through nature, the students explored the rich collection of insects, skulls, bones, stuffed animals and living specimens in the surrounding landscapes of Southwest Virginia.

“Mountain Lake has been great for our drawing and sculpture students the past two summers,” Singerman said. “Given the site’s natural beauty and the interest artists share with biologists in the natural world, it’s a great idea, and makes perfect sense.”

U.Va. biology professor Edmund D. “Butch” Brodie III, director of Mountain Lake station, said he has long known that the field station’s setting would serve as a great inspiration and subject matter for those in the creative arts.

Brodie said that he originally reached out to the art department because he believes the production of art and scientific research are similar – and that their creative processes have many parallels. He hopes that Mountain Lake will also attract creative writers, musicians, composers, historians – even law and business professors and students.

Ana Golici’s residency and lecture are made possible through U.Va.’s Buckner W. Clay in the Humanities Award. For information, contact the field station at 540-626-7196.

In Memoriam: Life of Drama Professor To Be Honored Sunday END_OF_DOCUMENT_TOKEN_TO_BE_REPLACED