Andy Warhol Comes to The Fralin 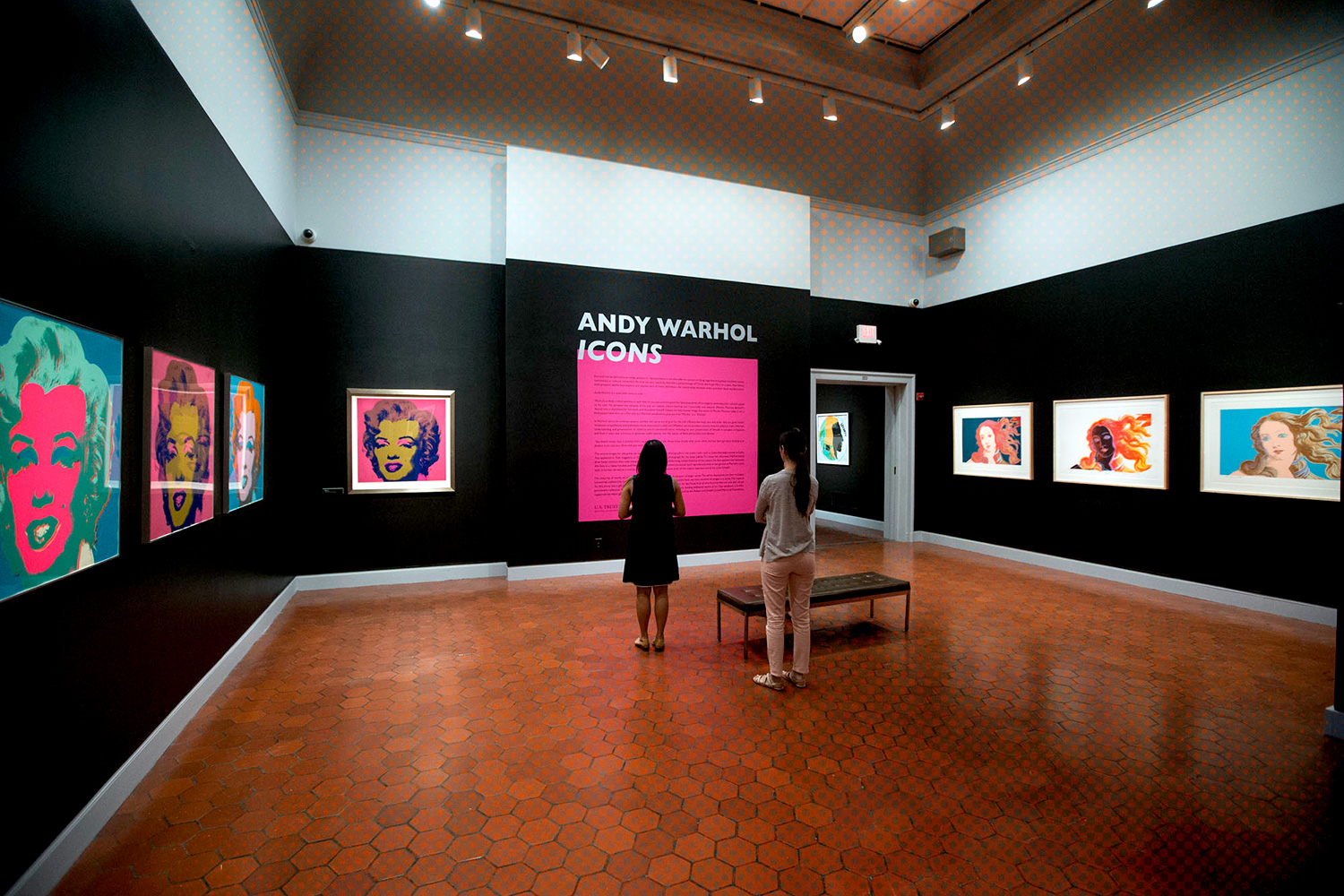 Many of pop artist Andy Warhol’s most iconic works – from his portrait series of Marilyn Monroe to a diamond-dusted portrait of Queen Elizabeth II – are now on display in The Fralin Museum of Art at the University of Virginia.

The “Andy Warhol: Icons” exhibition has transformed The Fralin’s Miller Gallery into a colorful celebration of celebrity. Featuring portraits of Monroe, Liza Minnelli, Jacqueline Kennedy Onassis and many other cultural icons, the exhibition highlights Warhol’s lifelong fascination with pop culture and the manufacture of fame. The show will run through Sept. 18, providing time for UVA professors time to incorporate the works into their summer and fall class syllabi.

“Andy Warhol is a 20th-century icon who shrewdly crafted his self-image by capitalizing on the iconicity of contemporary celebrities,” Curator of Exhibitions and Co-Interim Director Rebecca Schoenthal said. “The exhibition is a play on the contemporary notion of the icon, juxtaposed with the traditional notion of the icon.”

Emphasizing the connection between traditional and contemporary art, Schoenthal placed a 15th-century painting of the martyr Saint Apollonia, on loan from the National Gallery of Art, alongside four Warhol prints showing the same image in bright, contemporary colors. The installation emphasizes Warhol’s devout Catholicism as well as his later interest in Renaissance art. An adjacent display features his screen prints of Sandro Botticelli’s famed 1482 painting, “Birth of Venus.”

Several of the screen prints featured in the exhibition were gifted to The Fralin in 2014 by the Andy Warhol Foundation. To supplement these gifts, the museum spent more than a year seeking additional pieces to reunite some of Warhol’s most famous series.

“I loved the idea of putting the series back together while highlighting The Fralin’s pieces,” Schoenthal said. 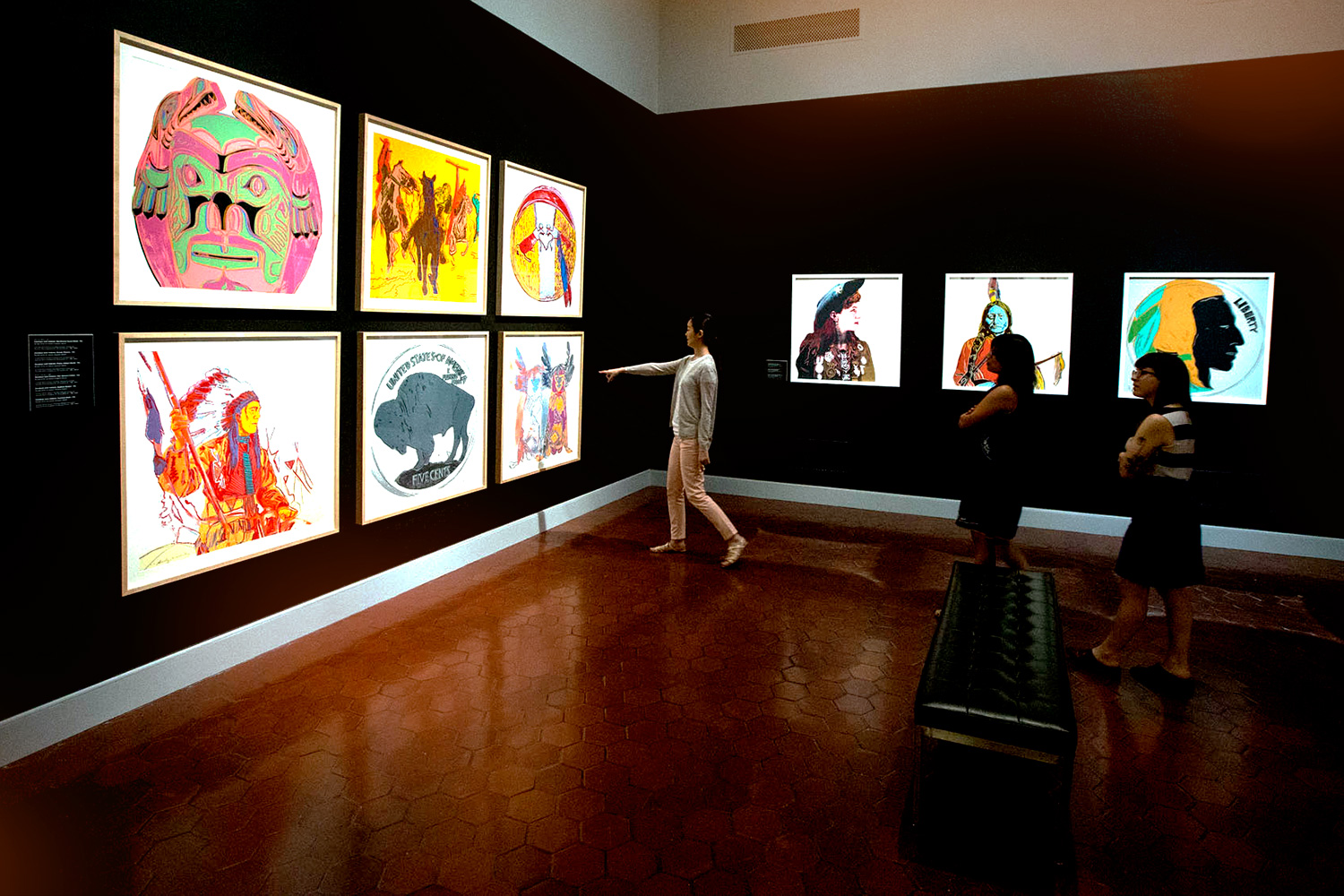 One series, “Cowboys and Indians,” includes colorful screen prints of Native American and Western figures like Geronimo, Sitting Bull, Annie Oakley and Theodore Roosevelt in his cavalry uniform. Another series, created by Warhol in the 1980s, depicts the four queens reigning at that time: Queen Elizabeth II of the United Kingdom, Queen Margrethe II of Denmark, Queen Beatrix of the Netherlands and Queen Ntombi of Swaziland. Three of those portraits are special editions that Warhol dusted with glistening crushed diamonds, adding to the prints’ material value and symbolizing the value of their subjects.

“Warhol was so concerned with value and commodity,” Schoenthal said. “The diamond dust plays on the idea of royalty and plays on the commodification of the image.”

“Casting Shadows” features pieces from The Fralin’s permanent collection which were purchased or gifted through the Ray A. Graham Endowment FUNd. Ten University Museums Interns – students studying the curatorial process at The Fralin – selected pieces that explore the metaphorical “shadows” of tragedies and controversies, such as war, slavery or poverty. The students worked collaboratively to select pieces, write wall text and give a public talk. Academic Curator and Co-Interim Director M. Jordan Love guided the exhibition, on display through Aug. 14.

The Fralin Museum of Art’s programming is supported by The Joseph and Robert Cornell Memorial Foundation.