Art Isn't Just the Pursuit of Beauty, According to Bill T. Jones 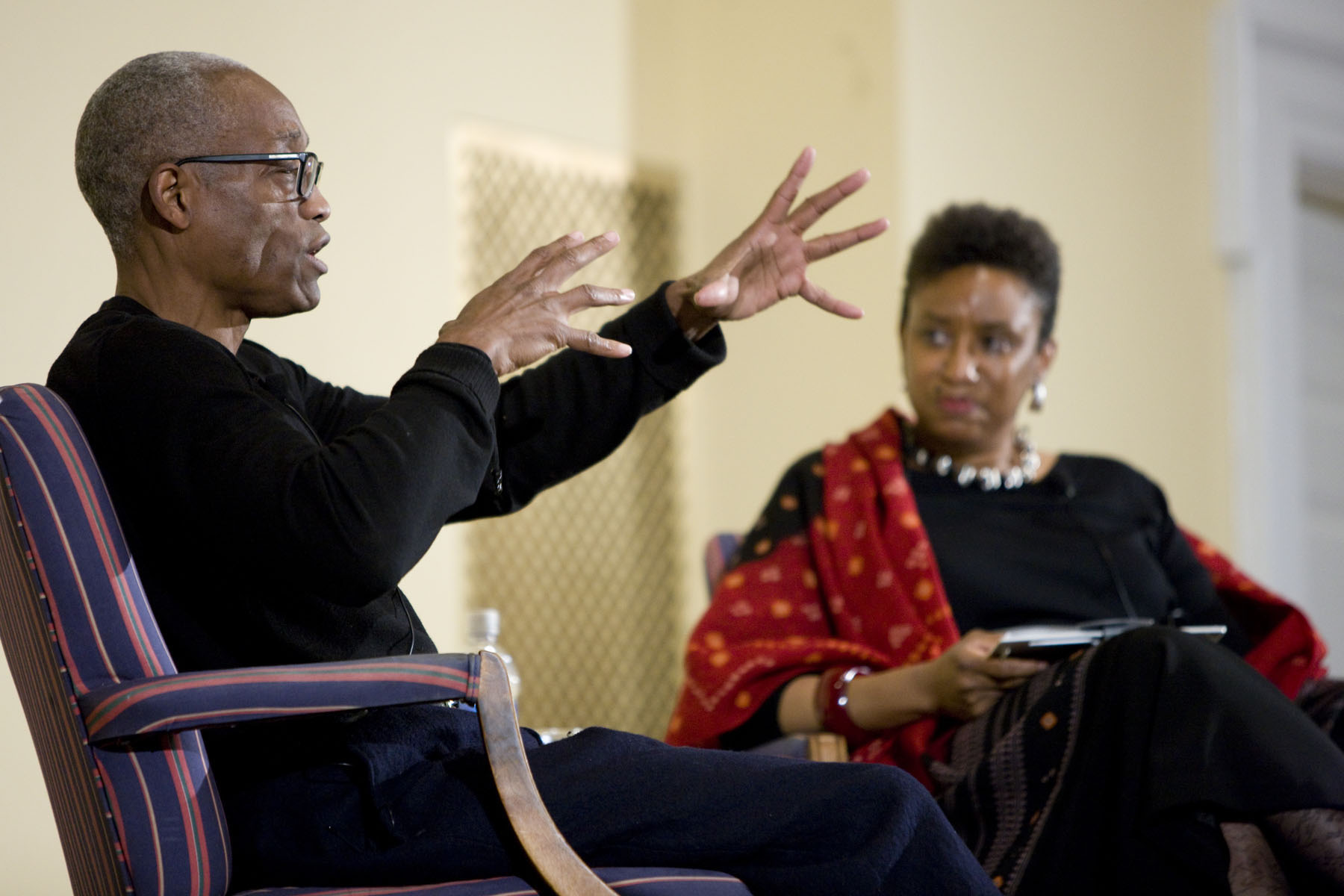 November 13, 2008 — In the artistic projects he takes on, award-winning choreographer Bill T. Jones said he wants his dance company to become an engine of change, both in the creative process and in the resulting performance.

They talked about his current project — a commissioned work for next year's bicentennial of Abraham Lincoln's birth — and how he combines personal experience with collaboration.

During his residency, Jones is conducting dance workshops and creating a performance, "100 Migrations," to be given Saturday at 4 p.m. at University Hall. The piece will be a collaborative project that involves students and community members.

When McDowell asked Jones how he usually responds when offered commissions or invitations, he said he usually says "No."

"I didn't immediately make the connection between Lincoln and black folks," Jones said. But then he became intrigued, thinking about tackling the historical material and about "how can I make a work of dance that really deals with the legacy of the man's complexity and … his legal arguments around slavery."

Jones is, first and foremost, concerned with the physical and spiritual health of the members of his company. The objective of dance, Jones said, is to get everyone's feelings — both dancers and observers — flowing as the dancers' bodies are moving. At the same time, he seeks to create an environment that challenges the participants' assumptions.

Dance is not just an "aesthetic pursuit of beauty," Jones said. He wants to couple that with the notion that the way people see beauty is informed by things like how much money is in your bank account, what your gender is, or what your race is, he said. The perception of beauty is influenced by where they have come from and where they are in life.

Driving this particular project is the question, "What does Lincoln have to say to us now?," Jones said. At the same time, he said he wants the work to be a mirror on the world we live in now and point in the direction of the big questions of our era.

In accepting the Lincoln commission, Jones has said that he had to confront the beliefs he held as a 5-year-old boy and those he holds now as a middle-aged man. McDowell asked how he has reconciled them.

"Abraham Lincoln was probably the only white man I was allowed to love unconditionally," Jones said. His mother told him other white people would be likely to treat him with racial slurs.

He was shocked to realize that, even at 56, he still "has been walking around with a cloud of presumption about the narrative around this man," Lincoln.

From his visits in the area, he has seen that not everyone regards Lincoln as a great liberator. Jones said he tries to be as open to opposing points of view, but he finds it difficult to have a conversation with someone who thinks it's all right to fly the flag of Dixie, whose people are still hurt by the Civil War's consequences, because he believes slavery was evil.

"How can I let them have that right without secretly feeling like they're racist? How can they generously share with me their point of view without them worrying if I'm thinking they are somehow lacking in morality or are racist?"

"These are the issues. This is the moral dilemma I have around Lincoln," Jones said.

Still, Lincoln is thought of as a redeemer and was the right man for his time, Jones said.

That brings up the question of whether there's a realistic possibility for a redeemer to appear in our time.

Rather than put that role on President-elect Barack Obama, Jones said we should look for ways to redeem ourselves.

"Might the redemption be embodied in a work of art?" McDowell asked.

Jones said he tries to lead his dance company to be a catalyst for change — intellectual, moral and political change.

"You have a remarkable ability to open up about your work ... You'll say, 'I don't know what's going to happen.' But particularly about this commission, you know what you don't want," McDowell said.

"I don't want to do a Civil War recreation, a biopic" about Lincoln's life, Jones responded. "I'm not trying to reconstruct or evoke the 19th century — that would be easier. It would much harder find the essential representation of our time. … It is hard to suggest these two different worlds without falling into cliché," he said.

"Lincoln offered an opportunity for us to go deeper into this sense of identity."

Although he wants the audience to leave his performances being moved in some way, he is open to expressing what he doesn't know, he said.

He still has the sense that the art comes through him, like the religious phrase from the black church, "Work me, Lord."

"I don't have the same belief, but I still have the mechanism of the belief and the sense of great purpose, even if I don't understand. … If I can be open enough, let it come through."

Netflix to Add Ads. Why This Could Be a ‘Game-Changer’ for Your Viewing Experience END_OF_DOCUMENT_TOKEN_TO_BE_REPLACED

What’s Next for UVA’s Class of 2022? END_OF_DOCUMENT_TOKEN_TO_BE_REPLACED