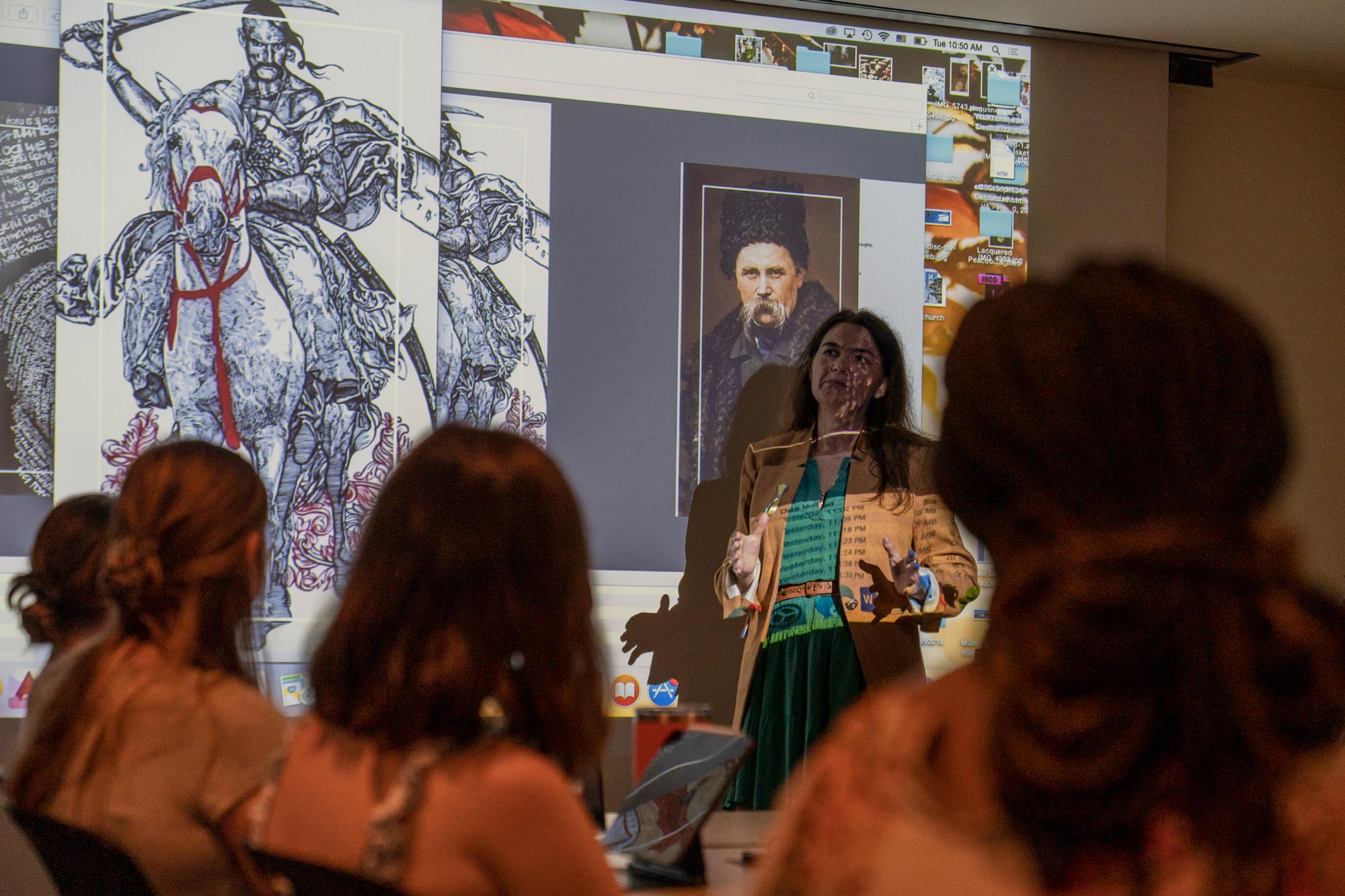 A week after Russia invaded Ukraine in February, Tatiana Yavorska-Antrobius, a Ukrainian artist living in Charlottesville, painted a self-portrait.

Chaotic brushstrokes filled the canvas with slashes of pink, purple and red, like a bruise, facial features dripping below vacant eyes.

Yavorska-Antrobius showed this painting, among other Ukrainian artwork, in a presentation she gave to University of Virginia summer students taking the course, “Art and War.” She recently sold this self-portrait to a German collector and gave the proceeds to buy bulletproof vests and helmets for Ukrainian soldiers, she said. The artist, born and raised in Ukraine, came to the U.S. when she was 18 and has lived in Virginia for eight years.

“I actually proposed this course prior to the invasion and was very fortunate that Tatiana agreed to come and talk,” instructor Dan Weiss said. “It would have been a missed opportunity to have a class on art and war and not address the war in Ukraine. To have her come and present so effectively, I think, was incredibly important for these students and for the cause.”

Art is as old as war, and vice versa. From cave paintings of hunting to modern propaganda illustrations and abstract images, art has been used as a tool to glorify – or undermine – violence and war. In Weiss’ course, students view art through this lens of conflict, combat and culture. They also learn about doing their own research and presenting their ideas with confidence.

“The department has a series of ‘Art and …’ courses that have been engaging, so I thought I would design one with my own experience and expertise,” said Weiss, who earned his doctorate in classical art and archaeology from UVA in 2012. Other courses offered by the department have included “Art and Power” and “Art and Devotion,” for example.

In her presentation to Weiss’ class, Yavorska-Antrobius touched upon significant points and people in Ukrainian history to explain that the issues behind the war have been there for centuries. She also showed current artwork depicting and addressing the invasion, such as photos, posters and cartoons that anonymous artists are making and sharing surreptitiously in war-torn areas and on social media.

Weiss, director-curator of the art department’s Visual Resources Center, is teaching the summer seminar to 10 students, most of whom have never taken an art history course before, he said.

Weiss, who is also an artist and illustrator, has been going through the history of art in Western civilization, starting with European cave paintings. Focusing on a theme and seeing how it’s depicted over time periods helps give students access to the world of art, he said.

Incoming first-year student Faith Leslie, a Louisa native, found out about the course in the summer program Hoos Getting Ready. “I took this class to venture out of my comfort zone. I didn’t know too much about art, so I thought this class would be a fun opportunity to learn something new,” she said.

Leslie found Yavorska-Antrobius’ presentation “really eye-opening. I think that sometimes people tend to separate themselves from violence and wars that don’t immediately impact them, but seeing images and artwork of the war in Ukraine made it so much more real and devastating.”

Yavorska-Antrobius’ July 26 presentation fit right into the course content, Weiss said. “It ended up being a great primer for what was to come, when we start seeing more and more art of war as expressed by the victims of it.

“From the very beginning, though, we have been talking about how one depicts intangibles. For example, what does horror look like? What do honor, terror, dominance and leadership look like?

“If art is supposed to evoke something – why and how did that happen, what did the artist do to make you feel horrified?”

The beginning of the course covered the terms for analyzing art right away, so the students could apply them as soon as possible, he said. He encourages them to “get past what you feel,” he said after a recent class – a process that can be applied to college courses in general, not just his course.

“They need to know why – as the way to present their ideas and mastery with confidence and clarity. This is why the formal elements are so important, because they give you the terminology to discuss why something might have evoked an emotion in you.”

On one of the first days, he used the familiar format of film, screening the opening 10 minutes of the 1987 film, “Full Metal Jacket.” It shows the dehumanization of war through U.S. Marine Corps recruits’ boot-camp training, from having their heads shaved to accepting the drill instructor yelling obscenities and berating them.

Weiss asked them, “What did we watch?” He said their first answer was “basic training.”

Then he asked, “OK, what did we just see? Talk about what you see, and how things are presented visually.” That included things like the drill instructor pointing his finger at the rookies similar to the Uncle Sam recruiting poster and all the hair piling up on the floor after the young men had their heads shaved.

That was an exercise to emphasize “don’t jump to context,” he said. “Then the next thing I show them is a very important work of art,” he quipped, “the United States quarter. I show them the front and back and we tear it apart.”

They discussed the coin using the terms for artistic elements including line, form, medium, color, plasticity, symmetry and scale. Then they considered all the contexts into which they could place the coin. Those contexts included religion, Neoclassical use of Latin, Arabic numerals, what the eagle is holding and why.

“So we have symbolism, and we have currency, economic systems. We have political systems, and so we talked about all these different things,” said Weiss, who served in the Marine Corps from 1994 to 1998. He has studied war for most of his academic career; his dissertation focused on Roman defense systems in northwestern Romania.

“We talk about all this stuff at the beginning, because these are the tools that they are going to use, and we revisit this day after day, because it’s like a foreign language, where you have to be fluent with it,” he said. “Daily practice is a big part of that.”

Leslie said, “Maybe it’s because I haven’t taken a UVA class before, but I was nervous that there would be a lot of pressure to immediately ‘know’ everything. I was pleasantly surprised to see that the class works off of what you do know.”

Almost every class includes discussion time Weiss labeled “roll call” in the syllabus. He adapted the military check-in to devote the beginning of class time for students to talk about something from their lives outside of class that relates to art and talk about why they liked it or why they didn’t.

“These students have absolutely impressed me,” Weiss said. “Roll call has been so instrumental to demonstrate that their thoughts have value, they do know this stuff, that it’s acceptable talking about big ideas.”

As the class progressed through different periods of art history and war in Western civilization, one of those big ideas has been the transition from art being commissioned to glorify the conquerors, enlarging them in terms of scale, to focusing on the people who are conquered as victims or martyrs. 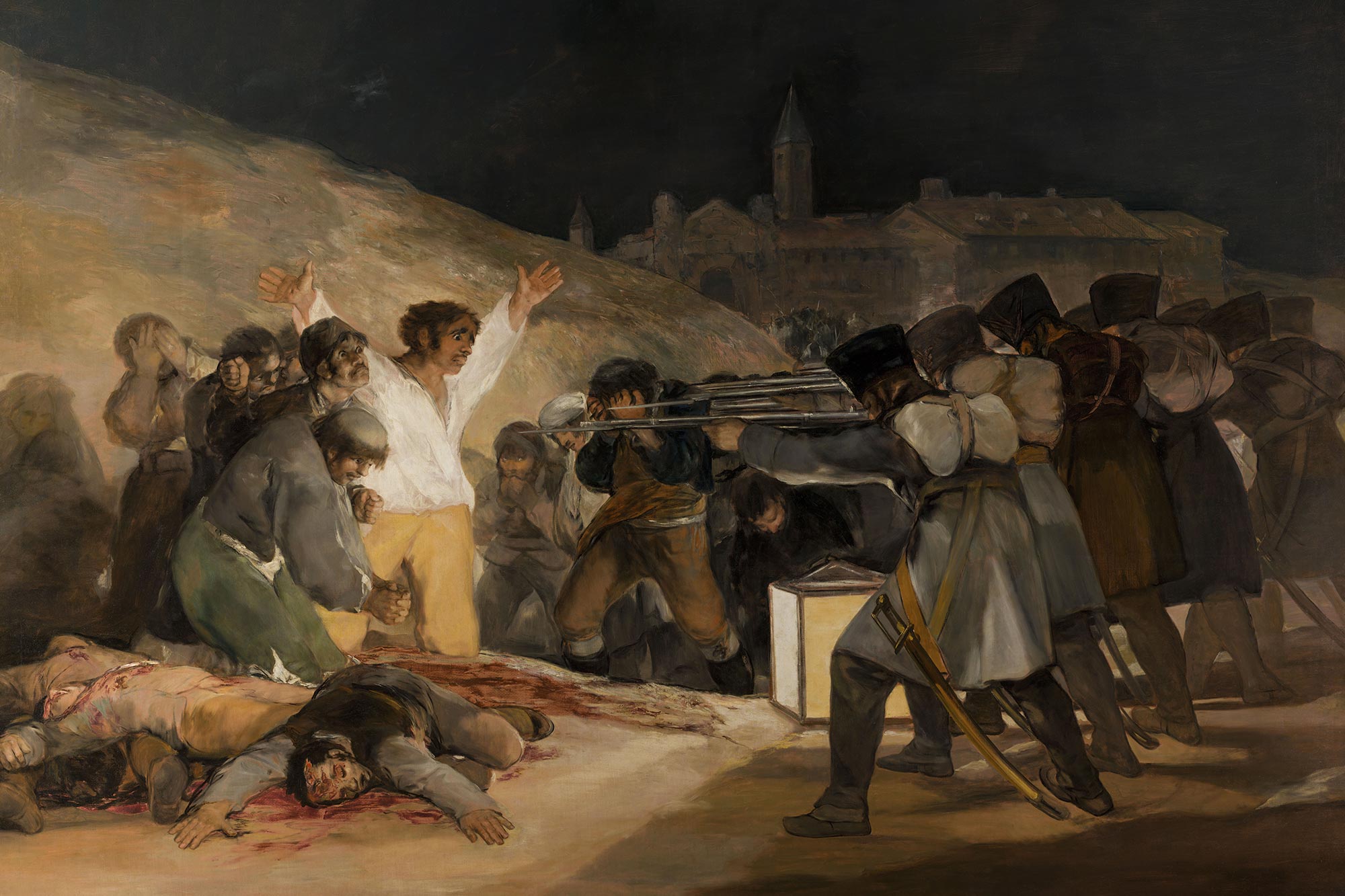 Spanish painter Francisco Goya’s “The Third of May 1808” marks a pivotal point in art about war by highlighting a victim facing a firing squad.

A pivotal work from the early 19th century, Francisco Goya’s “The Third of May 1808,” depicts a scene from the Spanish resistance to Napoleon’s army. The painting flips the hierarchy of scale, making the man facing a firing squad the focus, the largest figure bathed in light while the soldiers occupy darker parts of the canvas.

As the course gets into the latest century, Weiss said they have covered topics such as heroes and enemies, as well as political ideas including fascism and the difference between patriotism and nationalism. They’re looking at more recent monuments, such as the Vietnam Memorial.

Early in the course, students had to choose final project topics, and they’ve been discussing what they’re working on in their research. Their topics range from Egyptian art to the Harlem Renaissance to propaganda in comics and graphic novels.

Their final presentations won’t be a series of PowerPoint slides. They’ve also been learning and sharing their work using several digital tools that Weiss has tested as part of his job running the Visual Resources Center, using collaborative platforms that help them compare images and brainstorm ideas.

In college and continuing throughout life, no matter what the students do, presenting their ideas with confidence will serve them well, Weiss said.

“They’re going to have to present mastery in some way, and mastery is presented not just by knowing things, but then delivering that knowledge in a way that shows you have mastered it,” he said.

Monkeypox Is Spreading, But University’s Risk Believed To Be Low END_OF_DOCUMENT_TOKEN_TO_BE_REPLACED

Q&A: Assessing the Risks and Rewards of Pelosi’s Plan to Visit Taiwan END_OF_DOCUMENT_TOKEN_TO_BE_REPLACED

These Giant Wind Turbines, Inspired by Palm Trees, May Be the Future of Renewable Energy END_OF_DOCUMENT_TOKEN_TO_BE_REPLACED