For This Aspiring Psychologist, Life Experience Became an Academic Passion 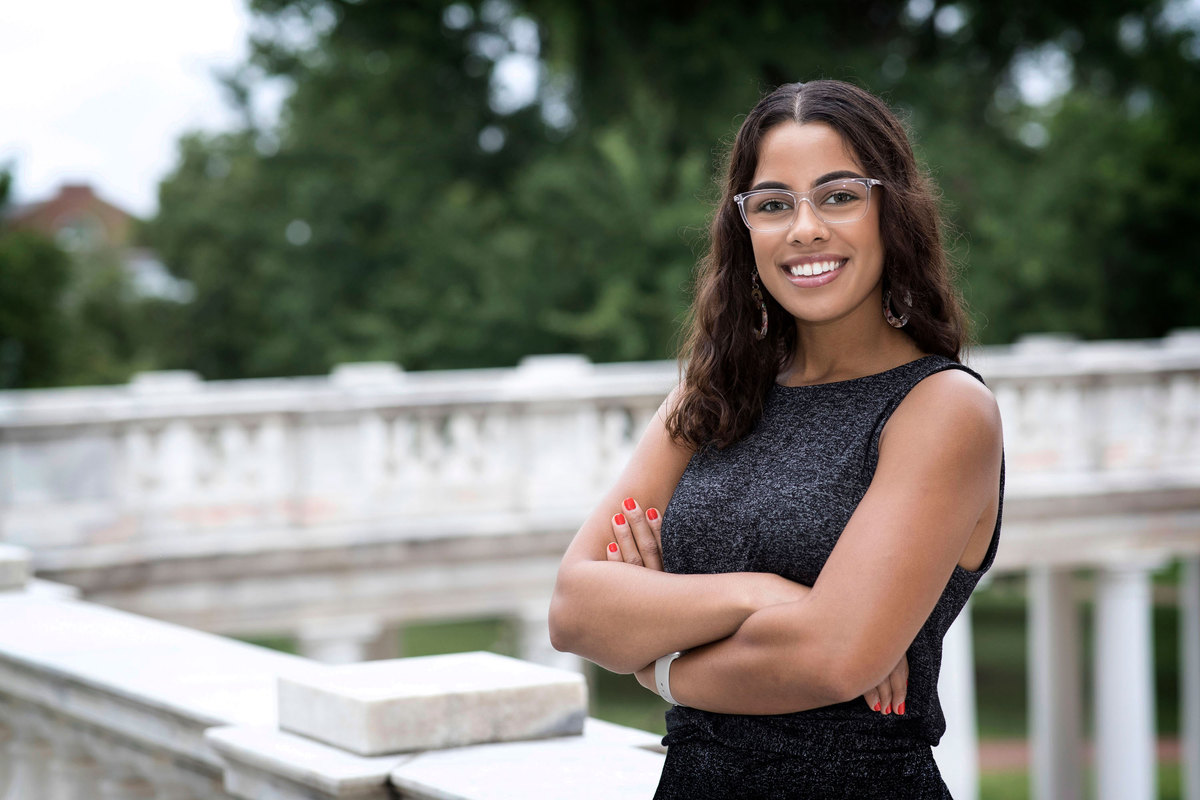 When Bianka Charity-Parker was in the eighth grade, her English teacher encouraged her to apply to the local honors high school.

Thankfully, she took the advice anyway. Now, Charity-Parker – with her sights set on becoming a clinical psychologist – is on track to earn her Ph.D. from the University of Virginia’s Curry School of Education and Human Development in May 2022.

“When I got to high school, I think that’s when I started to accept myself for who I was and really flourish,” she said. “So that was a huge experience in my life, just having her really believe in me, because [in many ways] it was the start of all the things that have led to this point.”

If anyone understands the value of support from a trusted adult, it’s Charity-Parker – because that’s exactly what she’s studying. In both her research and her clinical work, she is passionate about understanding how “natural mentoring,” or intergenerational, relationships develop.

Looking back, it’s easy to see why.

Charity-Parker is quick to point to her immediate family as a major source of support and guidance. But her childhood growing up in the Hampton Roads area wasn’t exactly typical.

When Charity-Parker was 5 months old, her biological father was incarcerated. Her mother, Maria, who is from Spain, then married Darnell Parker, a New Jersey native who worked at a juvenile detention center. Darnell had a daughter, and together, Darnell and Maria had three more children.

“My parents call us ‘the Peanut Gallery,’” Charity-Parker said.

The Peanut Gallery was just the beginning. Charity-Parker was 11 years old when her parents brought in her first foster sibling.

From that point on, her parents typically had between four and six foster children living with them in addition to their five biological children. Because of Darnell Parker’s career commitment to juveniles, the family was often given some of the most challenging cases in the Hampton area.

Trying to understand her foster siblings, who were often grappling with serious – sometimes dangerous – mental health diagnoses, could be frustrating for Charity-Parker.

“But one thing my parents did is they never allowed something to happen without processing the experiences with us and helping us to have an accurate understanding of situations that were based in the reality of their circumstances,” she said. “That helped me become appreciative of their work, and critical in my understanding of the types of situations I was exposed to.”

After several years of being foster parents, Darnell and Maria in 2009 opened their own mental health agency in Hampton, called “Concerned Adults Teaching Children Hope,” or CATCH, and started holding therapeutic camps every summer for high-risk children.

Her upbringing may not have been typical, but Charity-Parker can see the profound impact it had on her life. “It became all that I knew,” she said, “and really helped shape what was important to me – not only in terms of a possible future career, but also values to live by.” 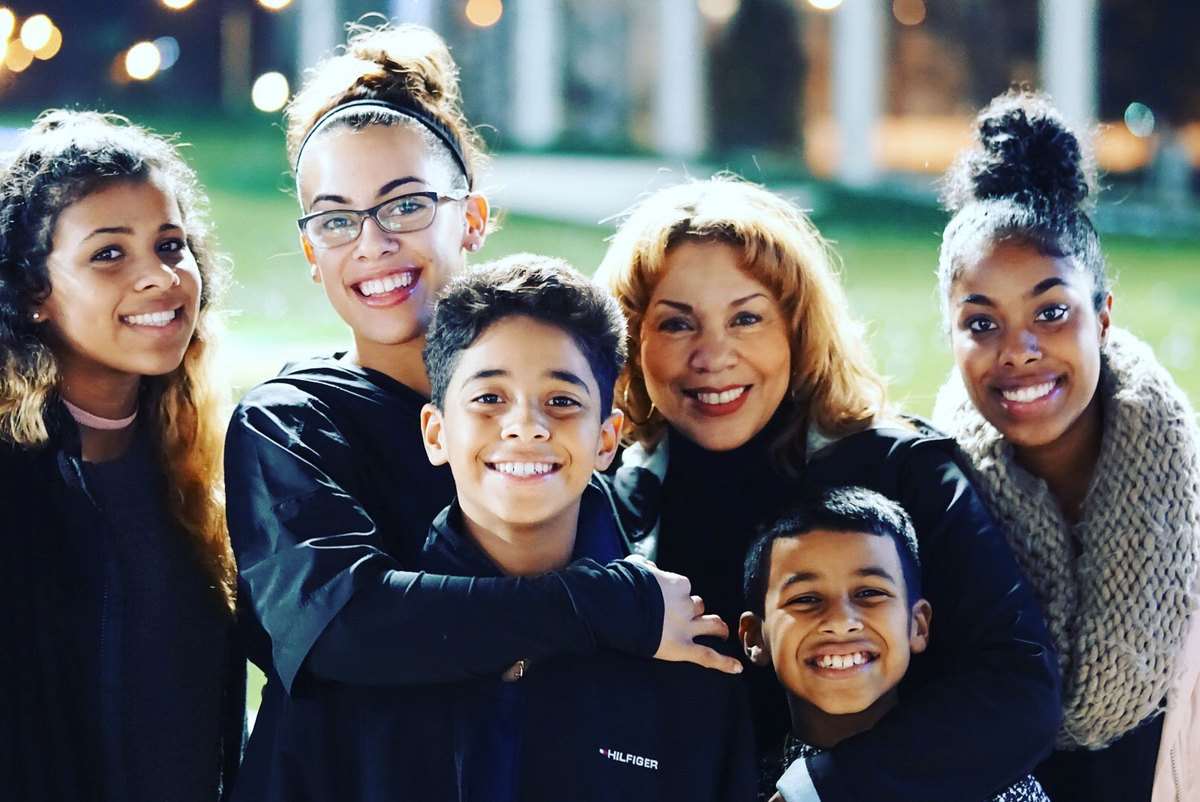 Despite strong support from her family, Charity-Parker struggled at times to understand and accept herself as she was growing up.

In kindergarten, she had problems reading. “I thought people saw the way I did, until somebody was able to explain it to me,” said Charity-Parker, who is legally blind in her right eye. “I thought everybody could only see primarily out of one eye. When I started to realize that wasn’t the case, I was like mind-blown. I couldn’t believe it.”

Doctors determined Charity-Parker was suffering from optic nerve hypoplasia, a condition caused by the underdevelopment of the optic nerve. She had two corrective surgeries as an adolescent, but continues to struggle with vision challenges.

“I remember being teased a lot,” Charity-Parker said. “When you have an eye that drifts, you don’t know that it’s happening. That was always embarrassing to me. Over time, I stopped making good eye contact with people because I didn’t want them to see my ‘secret.’ I didn’t want folks to know that I had a lazy eye. That really impacted some of my peer relationships growing up.”

As she grew older, Charity-Parker also had to learn to navigate the world as a biracial woman. She credits support from her parents, grandparents, and mentors – including the eighth-grade English teacher – for helping her learn to accept herself fully.

“Starting in high school, I really began to embrace the unique aspects of my identity, including my ethnic-racial identity being both Hispanic and black,” she said. “I know that there are students out there who have had very similar experiences, and I want them to know that being a student of color and having parts of you that make your lived experience more challenging doesn’t always preclude you from doing wonderful things or pursuing things that you’re passionate about. Finding solace in loving and trusting relationships with family, other adults, and even some peers have been key to my success.”

It wasn’t always easy. “I often practiced a ‘fake it until you make it’ mentality, and that was a part of my acceptance process,” Charity-Parker said. But, over time and with support, she found confidence in embracing every part of her identity.

Some of that confidence came from sharing parts of herself through academics. For her first project at a new high school, she chose a topic close to home: optic nerve hypoplasia. “That was the first time where I could more confidently say to myself, ‘This is a part of who I am, and I’m going to share knowledge about it.’”

“SURP helped me recognize that I could have a career in this field, that I had what it takes beyond what I had learned growing up. … I just felt like the program saw me.”

After excelling in Hampton High School’s International Baccalaureate program, Charity-Parker went on to Spelman College in Atlanta, where she majored in psychology and women’s studies and became a Phi Beta Kappa Society member.

It was in the summer of her junior year that – knowing she needed more research experience –she took part in the Curry School’s Summer Undergraduate Research Program.

There she met professor Nancy Deutsch and other faculty members and graduate students whom she now considers mentors.

“I don’t mean this to be cheesy or [a] cliché, but it really changed my life,” Charity-Parker said. “SURP helped me recognize that I could have a career in this field, that I had what it takes beyond what I had learned growing up. It just helped me gain clarity around where I was hoping to go.

“I just felt like the program saw me. It helped me develop into the budding psychologist that I am today.”

After graduating from Spelman in 2015, Charity-Parker worked as a kindergarten teacher in a low-income part of Atlanta, then took a part-time job at a probation office the following year.

Charity-Parker said the idea was to gain field experience, a notion her mother found amusing.

“I said, ‘Bianka, you’ve had an internship for the last nine years of your life,’” Maria Parker said, laughing.

But for Charity-Parker, it was exactly what she needed to inspire a lifelong research question. “That experience teaching really solidified my particular interest in serving youth and families from traditionally underserved backgrounds and being able to identify how we can make progress in increasing access and opportunity,” she said.

In 2017, she returned to Curry as a grad student in clinical and school psychology.

Noelle Hurd, an associate professor in UVA’s Department of Psychology, has been impressed from day one.

“Her insider perspective on the lived experience of individuals facing adversity makes her a better researcher, scholar and clinician,” Hurd said. “We need more people with personal experiences that can inform scholarship and the provision of services to families experiencing disadvantage.”

Reflecting on where she is today, Charity-Parker can see that her life’s work is thoroughly grounded in who she is, where she comes from, and everything she’s experienced.

For her dissertation, she’s exploring how the strength and quality of our earliest relationships, with parents or caregivers, could affect how natural mentoring relationships develop later in life. In particular, she’s looking at how these relationships intersect with racial identity.

“There’s a lot of work showing that natural mentoring relationships are really integral for the well-being of youth more generally, but black adolescents in particular,” she said. “If we know that these relationships are so important for young people, particularly racial and ethnic minority individuals, then how do they fit in with the role of parents? That work hasn’t been done as much.”

After UVA, Charity-Parker hopes to support and help underserved individuals and families in some capacity. She said continuing the legacy her parents started through their community mental health agency is something she’s considering.

Wherever she goes next, she wants to help understand and support healthy relationships, particularly for young people who have faced adversity. It’s a way of giving back – and honoring those who have supported her.

“That’s why this work is so important to me,” she said. “If we’re able to understand these relationships better, we can think more about – for children who don’t have access to strong bonds at an early age or in the current moment, what can we do about that? How can we provide young people the opportunity to develop strong, meaningful bonds that can impact their livelihood, their well-being, and their access to opportunities they deserve?”

A Year We Will Never Forget: 2019-20 in Review END_OF_DOCUMENT_TOKEN_TO_BE_REPLACED

‘What Will You Carry With You?’ Remarks From UVA President Jim Ryan END_OF_DOCUMENT_TOKEN_TO_BE_REPLACED