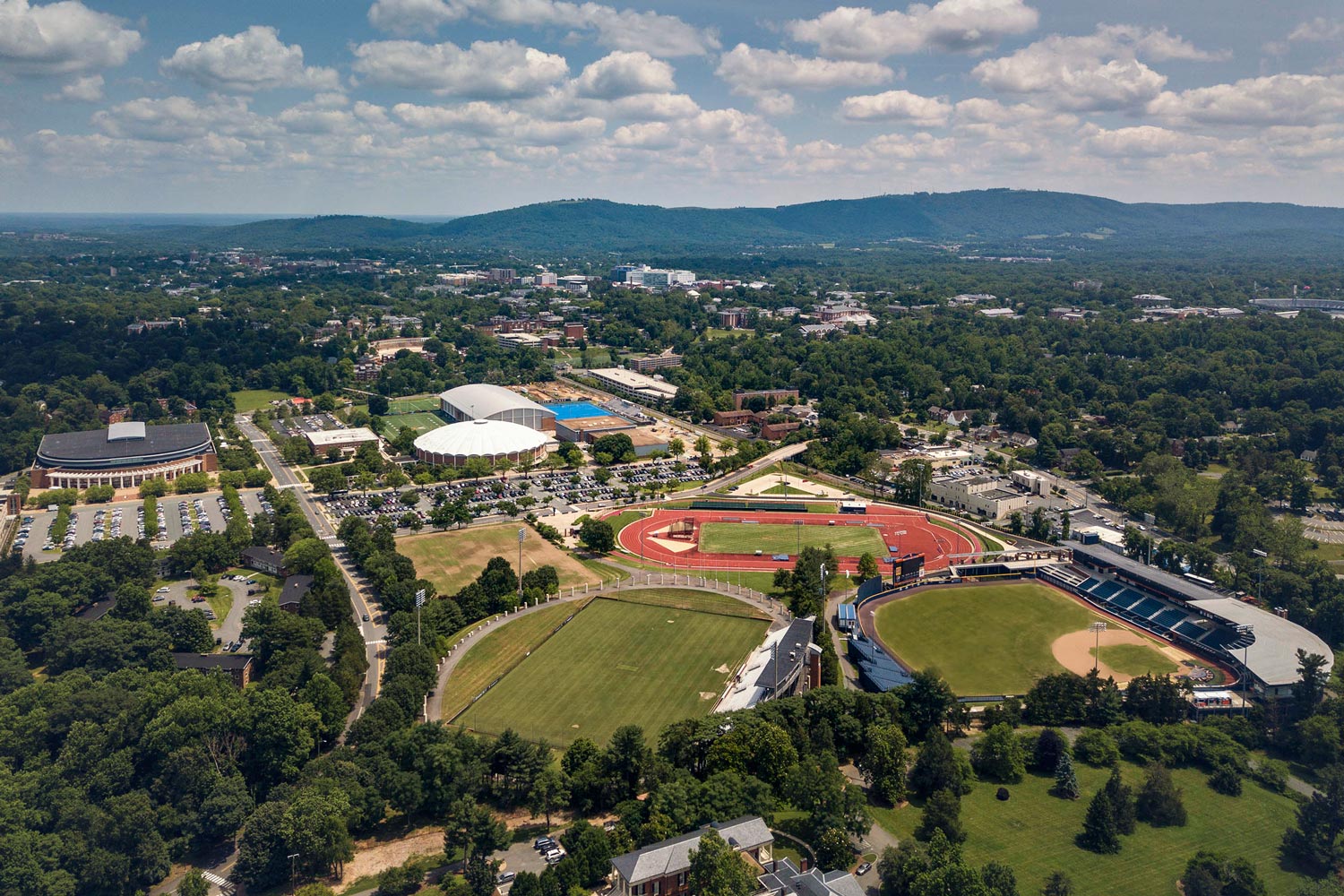 For University of Virginia athletics, a new chapter is closer to becoming reality.

In the Rotunda’s Board Room on Thursday, Alice Raucher, the University’s architect, presented a proposed master plan for the athletics precinct on North Grounds to the Buildings and Grounds Committee of the Board of Visitors.

Highlights of the master plan include a new football operations center, a new Olympic sports building, additional practice fields, a renovated McCue Center and a promenade for pedestrians.

“I think sometimes people may overuse the word ‘transformational,’ but that really is what it would be for all 27 of our sports,” UVA Director of Athletics Carla Williams said afterward.

“Every student-athlete, along with each program and each coach, would benefit from this master plan. That’s why it’s so important to think comprehensively about it like we are: to of course include a football operations center, but also consider student development, sports performance and where the student-athletes live every day – and that is in their locker rooms, in their meeting spaces and in their training spaces.”

The plan also aims at improving pedestrian and vehicular connectivity between Central Grounds and North Grounds.

The athletics precinct, which encompasses 82.35 acres, currently includes University Hall, Onesty Hall, the Cage and a sports medicine facility – all structures that UVA plans to demolish by 2020. The coaches, staffers and more than 400 student-athletes who use those buildings will be relocated soon to locker rooms and offices in temporary modular units in the Cage parking lot.

The cost of this project, which includes asbestos abatement, is estimated at between $12 million and $14 million.

Once U-Hall and the adjacent structures are removed, the reshaping of the proposed precinct will continue, pending approval of the Board of Visitors.

The new football facility would include, among other features, a team area, a strength and conditioning center, meeting rooms, an equipment room and offices, as well as areas for sports nutrition, video operations, sports medicine, sports science and recovery.

How much these construction projects would cost has yet to be finalized. Also still to be determined is how long many of these projects would take to complete. Even so, Thursday’s meeting represented another step forward for the proposed master plan.

“This is great that we’re here at this point,” board member Robert Hardie said, “and I want to once again commend Alice and Carla. This was a real bottoms-up approach. I think the coaches were ecstatic about their participation [in the creation of the master plan] ... and I think that drove a lot of this. So now they’re connected. They know that if they want their facilities, they’re going to have to help raise the money to make them happen.”

Upon approval by the board, the softball stadium will be located at the southwest corner of Massie and Copeley roads. Construction is scheduled to begin in October and be completed in early 2020. That site has been used as a practice field for soccer and lacrosse. Virginia’s softball team currently practices and plays at The Park, about seven-tenths of a mile from Klöckner Stadium.

At the meeting Thursday, Raucher reviewed the proposed schematic design of the stadium.

“We think it’s great,” Williams said. “There’s still some work to do based on the cost estimates, but it’s a vast improvement from what we have now. So we’re very excited.”

The design team for the softball stadium, Raucher said, plans to “move forward with the development of the site package and come back to [the Buildings and Grounds Committee] for approval in September of the actual design of the exterior.”

Williams came to UVA in December from the University of Georgia, a Southeastern Conference school with impressive facilities for athletics.

Shortly after taking over at Virginia, Williams toured its athletics complex, including the McCue Center and U-Hall. She quickly realized that some of UVA’s athletic facilities lag behind those of many of its peers in the ACC and around the country.

“It's no different from any other unit on a college campus,” Williams said Thursday. “You’re forever assessing and developing. I don’t think of it as an arms race or anything like that, but you're continually evolving and developing, and we want to be among the best.

“In order to do that and attract the best scholar-athletes in the country, we have to have competitive training facilities – not just to attract recruits, but also for the training and development of our current student-athletes.”

All of UVA’s varsity teams will benefit from the upgrades proposed in the master plan, but none more so than football, which is heading into its third season under head coach Bronco Mendenhall.

In 2017, Virginia won six regular-season games to become bowl-eligible for the first time since 2011.

The McCue Center, which opened in 1991, houses UVA’s football team and no longer compares favorably to similar facilities at most Power 5 schools. That’s contributed to the Wahoos’ struggles on the field over the past decade.

University Hall opened in 1965. It served as the home of Virginia’s basketball teams until 2006, when John Paul Jones Arena opened.

U-Hall’s main court and the seating around it have been closed off for several years. The building’s concourses, however, have continued to house several administrative offices, as well as locker rooms for such teams as women’s and men’s track and field, softball, field hockey, rowing, women’s and men’s lacrosse, and women’s and men’s soccer.

Those teams, plus some of UVA’s strength and conditioning operation, would be relocated to the new Olympic sports facility.

Virginia’s wrestling program has been based in Onesty Hall. The Cage, a multi-purpose structure, has been used by several teams, including track and field and softball.

Some of Virginia’s athletic facilities, most notably JPJ and Disharoon Park, which has undergone an $18.76 million expansion since the end of the 2017 season, rank among “the best in the country,” Williams said. “But we have to also address the facilities of those sports that are currently housed in U-Hall and Onesty.”

The design team for the master plan includes two outside firms, DumontJanks and HOK Sports.

“We’ll continue to work with the University architects, University Facilities Management, and also with the outside sports consultants to further refine the designs of all of these facilities,” Williams said.

“We’ve already started talking to a lot of donors and supporters about the vision. Hopefully when we do have some renderings and cost estimates we’ll be able to share more information with donors.”

What Is Biotechnology? Where Is It Headed at UVA? END_OF_DOCUMENT_TOKEN_TO_BE_REPLACED