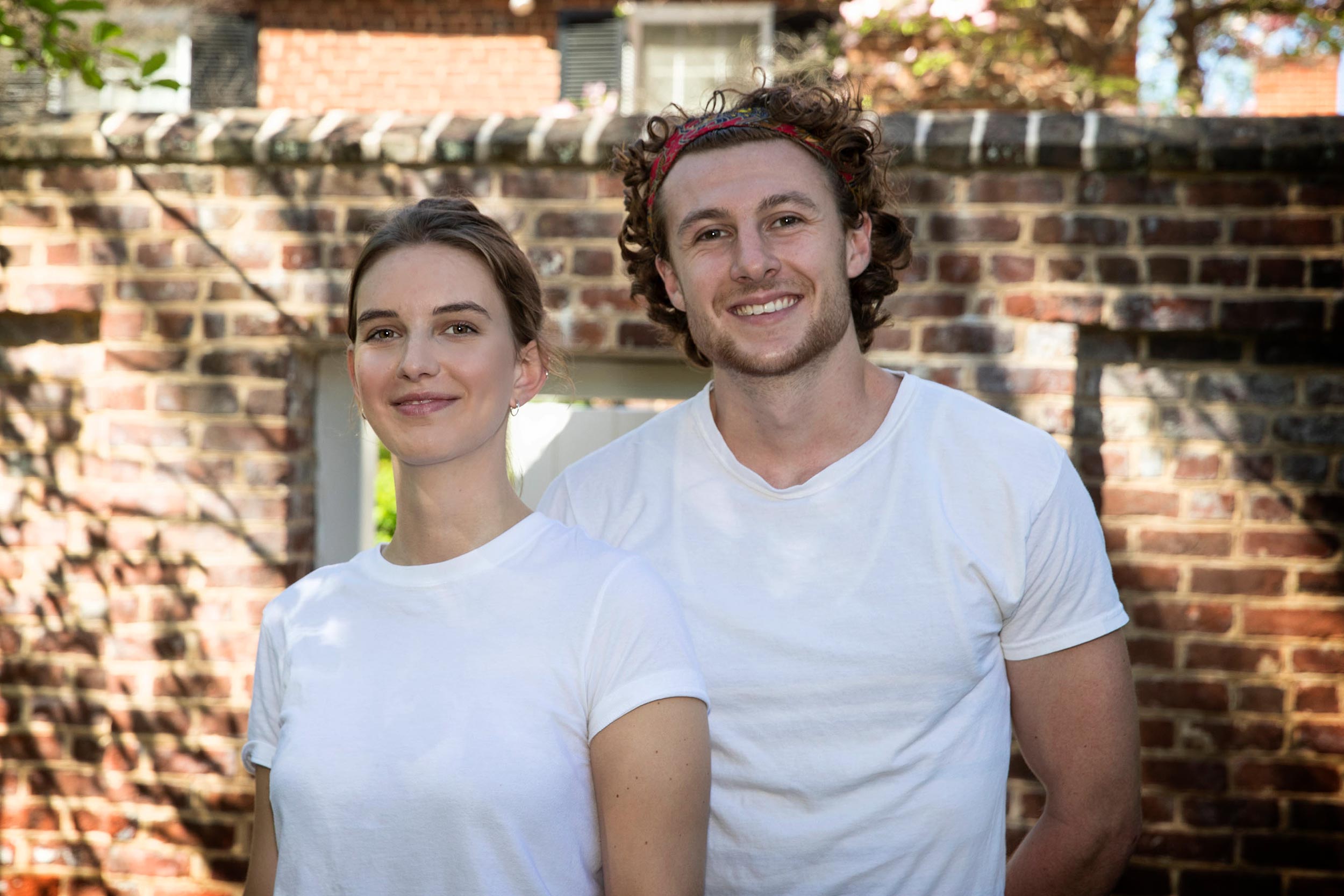 Two University of Virginia students have won support for their plan to encourage new kinds of economic development, to supplant environmentally destructive copper mining, in a biodiverse Ecuadorian valley.

India Brahm of Alexandria, a fourth-year global environmental sustainability major, and Patrick D. Robinson of Fairfax, a fourth-year global development studies and foreign affairs major, won a Davis Project for Peace award for their work in the Intag Valley, where copper mining interests clash with a more traditional way of life. Brahm and Robinson’s plan involves an organic coffee cooperative, an ecotourism project and a women’s artisan collective.

The pair are not strangers to the region. Both have lived in South America and are fluent in Spanish, and Robinson spent several weeks in the Intag Valley in 2018.

The pair will work with Defensa y Conservación Intag, an organization founded in the 1990s as an alternative to proposed mining activity, supporting several local initiatives.

“We understand our project as an intervention that supports existing initiatives and the development of sustainable economic opportunity, thereby contributing to a vision of peace based on Sumak Kawsay,” they wrote in their proposal to the Davis Foundation. “Sumak Kawsay is an indigenous Andean cosmovision that emphasizes environmental preservation and regeneration, satisfaction of basic needs, political decentralization, participatory democracy and respect for indigenous knowledge, culture and territory.”

Brahm’s global environmental sustainability capstone project looks at conservation and resource extraction in Ecuador during the administration of Rafael Vicente Correa Delgado, an Ecuadorian politician and economist who served as president from 2007 to 2017. Brahm said her goal is to understand what 21st-century “development” has meant in Ecuador and why development happens unevenly.

“With this grant, I will have the opportunity to learn about the challenges communities face in maintaining agency over their land,” Brahm said. “I have spent the past 3½ years studying the kind of problems, both in theory and in praxis, the communities in the Intag valley now face. I will see how those dynamics actually play out outside of the institutional setting of academia.”

Brahm also wants to learn how local activists have been successful in initiating sustainable alternatives to extractivist development.

“Since the 1990s, our community partner [Defensa y Conservación Intag] has been instrumental in creating a successful network of economic alternatives to mining,” she said. “I am particularly interested in understanding how communities organize against the threat posed by mining, given many different interests, and what causes these movements to fracture.”

Robinson said project will give him an opportunity to continue his studies of how mining affects rural livelihoods in the cloud forests of northern Ecuador.

“This project has grown out of existing personal relationships with local activists,” he said. “This award will enable our team to apply the knowledge we’ve gained on previous trips to the project site in ways that benefit local residents and promote peace in the region.

“Moreover, it will grant us valuable firsthand experience with transnational activism.”

“Patrick and India had a great project idea that complemented their strengths and experiences,” said Andrus G. Ashoo, director of UVA’s Office of Citizen Scholar Development, which helps connect students to scholarship opportunities. “However, I am most satisfied with their receipt of the Davis Peace Prize because Patrick and India also worked hard and submitted their project for critique in advance of applying. They took the criticisms in stride, went back to the drawing board, consulted faculty and community members and ultimately returned with a much better plan. I look forward to what comes of this project in the years to come.”

The project will not only have an effect on the residents of the Intag Valley, but also on UVA. Brahm and Robinson anticipate a long-term relationship between the University and the valley’s residents.

“We are currently engaged in establishing an internship program with [Defensa y Conservación Intag] through the Office of Global Internships and have already formed an undergraduate research team that includes two second-year students to study the conflict,” they wrote in their proposal. “These measures, combined with our efforts to market [La Asociación Agroartesanal de Caficultores Río Intag] coffee in Charlottesville, will result in long-term student engagement and project sustainability.”

David Edmunds, director of the Global Development Studies program and faculty adviser for Brahm and Robinson’s project, has facilitated sustained student engagement with local communities around the globe, recruiting successive cohorts of students to participate in research.

“Patrick and India buy into a way of working that is increasingly common at the University and certainly important within global studies: long-term engagements that address priorities important to the people with whom students work; engagements that are designed, implemented and evaluated collaboratively; and engagements that make contributions to classroom discussions and academic literature as well as to the lives of the residents of Intag Valley residents,” Edmunds said. “We imagine this visit as an important next step in building relationships that will last for many years.”

Edmunds described the pair as “serious, mature and disciplined people and students,” who have been working closely with their counterparts in Defensa y Conservación Intag.

“I think what Patrick and India appreciate most about the organization, and what I do as well, is the support DECOIN offers to people whose ways of living are under threat from resource extraction companies with limited knowledge of and respect for those lifeways,” Edmunds said. “India and Patrick have been learning whatever they can to take to DECOIN about the dangers of such rapid, large-scale extraction. They are also clear that they will bring back lessons from the work of DECOIN and others in Ecuador to support communities under stress in the United States.”

Brahm and Robinson are also working with the International Studies Office, Global Studies Department and McIntire School of Commerce to establish a January term course to bring UVA students to the Junín ecolodge.

“During our time in Intag, we will work with local ecologists, DECOIN and UVA Professor of Sustainable Development Brad Brown to develop a curriculum that addresses the social and environmental consequences of extractivist activity, the ecology of the region and the multiple dimensions of its political conflict,” they wrote in their proposal. “We will also identify suitable local professionals necessary to implement the course. Thus, we hope to provide a valuable educational experience for UVA students and generate income for the 30 co-owner-operators of the Junín ecolodge, thereby further fulfilling our second objective of strengthening sustainable economic alternatives to mining work.”

Brahm is a docent at the Fralin Museum of Art and a member of the Charlottesville Angel Network, a network of executives, entrepreneurs, scientists and engineers who use their skills, connections and capital to help entrepreneurs. A graduate of W.T. Woodson High School in Fairfax, she hopes this endeavor will give her insight into future work on issues of food sovereignty.

“Among my goals for this project is to learn how I might merge my belief in sustainable eating and human rights with my passion for cooking,” Brahm said.

“These attempts to strengthen existing sustainable economic alternatives to mining work will prevent conflict in Intag by augmenting the income of some of those whose livelihoods are most immediately threatened by environmental degradation,” Robinson writes. “Further, they will become the building blocks of a sustained peace in the region by demonstrating that a community development strategy based on environmental conservation and compatible with agricultural lifeways is possible.”

Q&A: Assessing the Risks and Rewards of Pelosi’s Plan to Visit Taiwan END_OF_DOCUMENT_TOKEN_TO_BE_REPLACED

These Giant Wind Turbines, Inspired by Palm Trees, May Be the Future of Renewable Energy END_OF_DOCUMENT_TOKEN_TO_BE_REPLACED