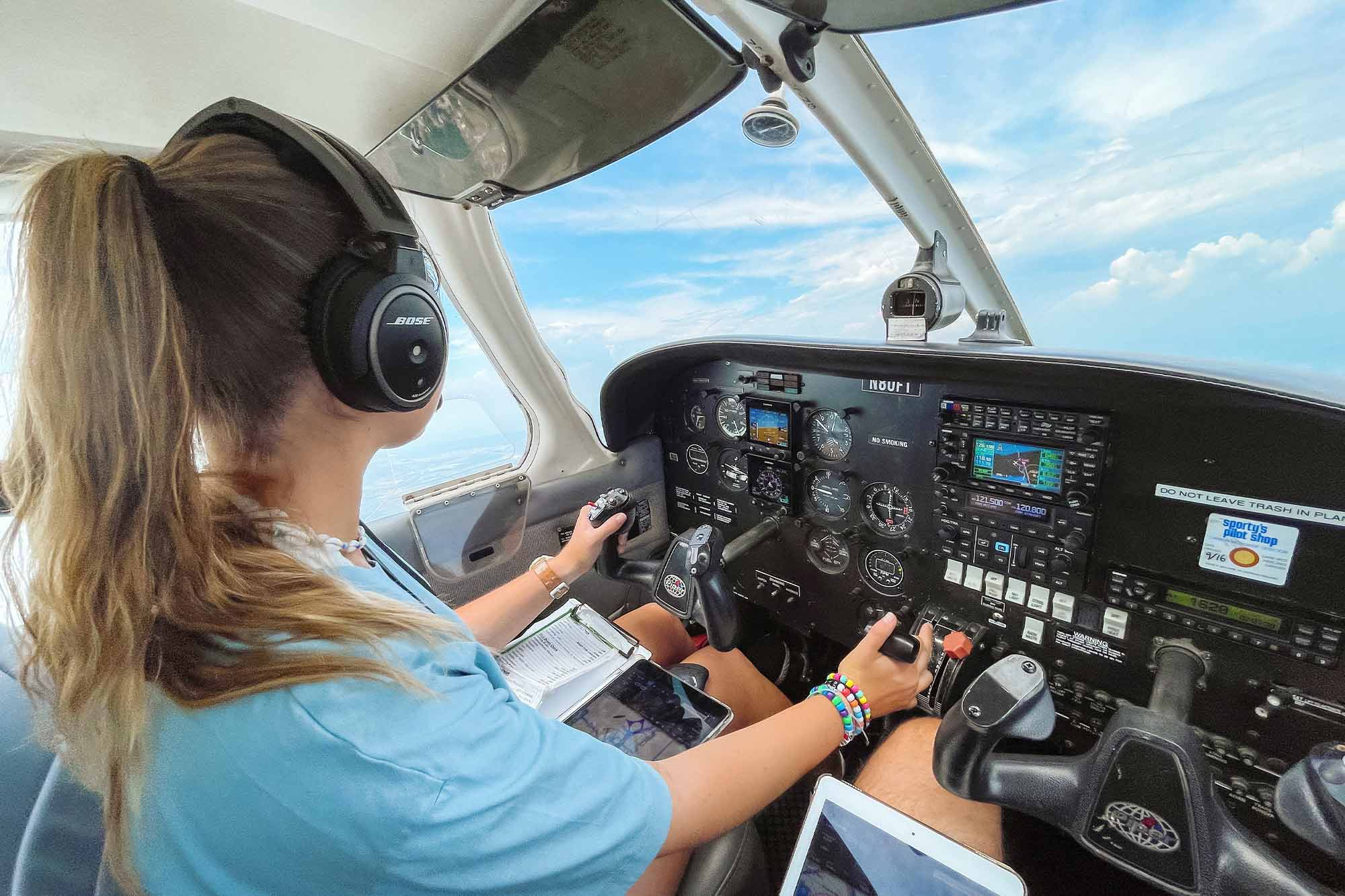 A childhood fascination with aviation grew into a career aspiration for Gillian Moore, who encourages girls and women to pursue interests in flying. (Contributed photo)

Tuesdays are Gillian Moore’s favorite day of the week.

On those days, the University of Virginia student wakes up at 7 a.m. A half-hour later, she’s in a philosophy lecture. Then at 10 a.m., she gets to the Charlottesville-Albemarle Regional Airport, hops into the pilot’s seat of a small plane and flies off the runway.

For the next few hours, she’ll buzz around the Blue Ridge Mountains in a rented Cessna 172 or whatever aircrafts are available. Finally, she’ll zip back to Grounds for a lecture at 3.

That evening, she might upload her adventure to Instagram and TikTok, where she has a combined 28,000 followers. Her TikTok videos often top 10,000 views.

As a second-year student and private pilot, Moore has the unique challenge of balancing her time on Grounds with her time amongst the clouds.

Aviation has fascinated Moore since she was just 9. Her childhood was full of visits to Gravelly Point, a park just north of Reagan National Airport in Arlington, where Moore and her father watched the planes take off and land.

“Gillian has had a love of all things aviation related from an early age, enjoying a Playmobil airplane set from her toddler years through cockpit curiosity while on our family travels,” Moore’s father said.

Moore’s father, Declan, worked for National Geographic, allowing Moore to travel frequently while growing up, including exciting destinations like London, Alaska, Tanzania and the Amazon rainforest.

“All this led to a gift of an introductory flight lesson at Washington International Flight School, and when she landed, we could tell she was hooked,” Declan said.

In December 2020, for Moore’s 18th birthday, her father gave her a first flight lesson, commonly referred to as a “discovery flight.”

At first, Moore hoped to keep her love of aviation as a hobby, but after her first solo flight, she quickly realized that her love of flying could turn into a career path. 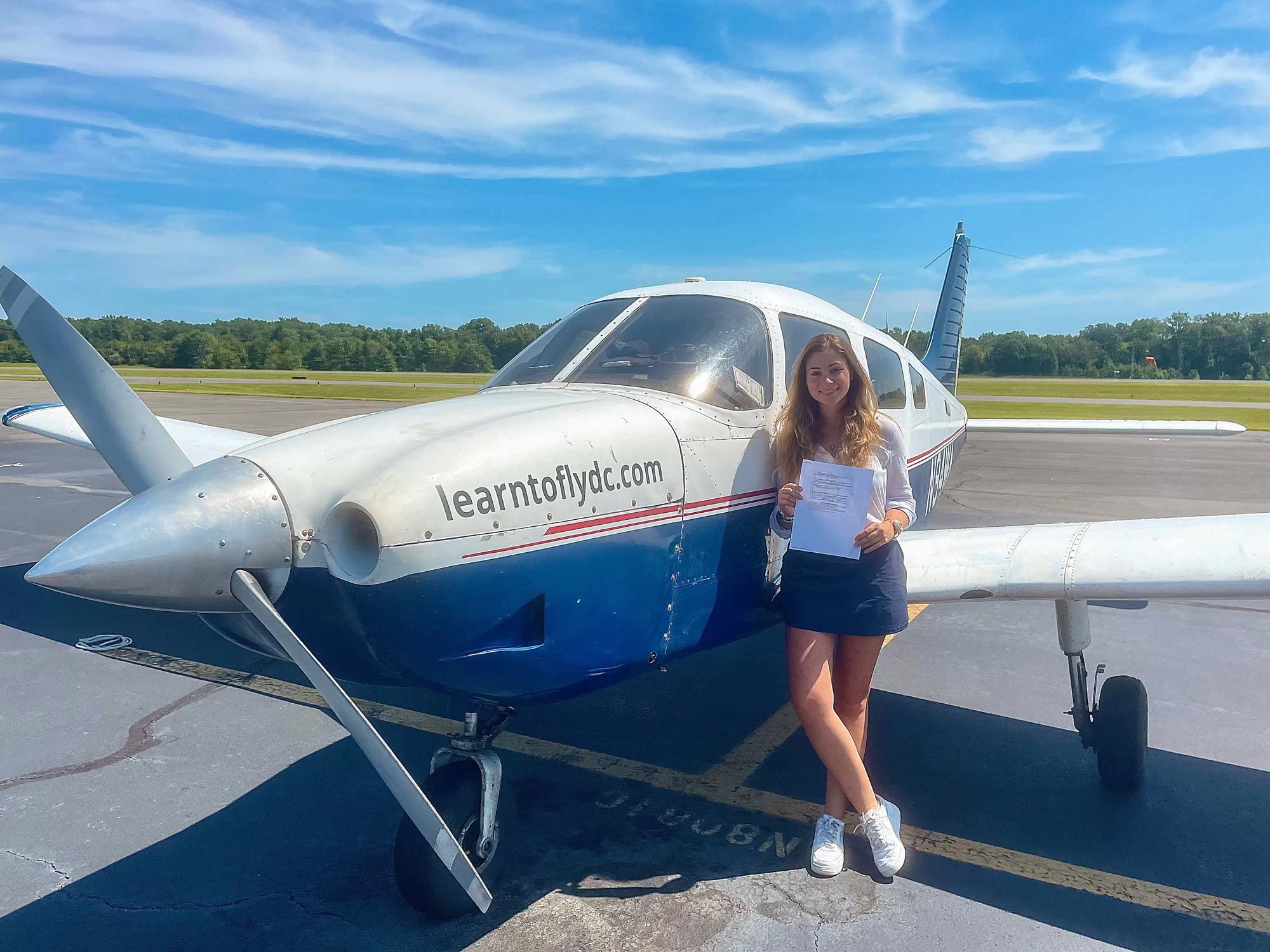 Moore completed her instrument rating in the summer of 2022, allowing her to fly during inclement weather. (Contributed photo)

“It definitely started as something where I intended it to be for fun,” Moore said. “But after my first milestone of flight training, which was my first solo flight with no instructor in the plane with me, I decided that I wanted to make flying a profession.”

In the summer of 2022, Moore completed her instrument rating, a certification to fly during inclement weather, and the high-performance endorsement, allowing her to fly a faster and heavier plane. Altogether, Moore has accumulated almost 200 flight hours, more than half of which have been solo flights.

“I started my Instagram account not to grow into anything big, but to document my progress and look back on when I get my first flying job after college,” Moore said. “I never anticipated it growing into anything more than that.”

Since its launch in September 2021, Moore’s Instagram has amassed over 25,000 followers. Her audience has allowed her to find a community, connecting her with aviation enthusiasts and professionals from across the country.

“I found this hilarious group of pilots from all walks of life, including student pilots, airline pilots, and anywhere in between,” Moore said. “They have been really fun to get to know online.”

The EAA AirVenture airshow is held annually at the Wittman Regional Airport in Oshkosh, Wisconsin. Without knowing anyone in attendance, Moore visited the airshow, one of the world’s largest gatherings for pilots and enthusiasts, meeting dozens of fellow fliers with whom she keeps in contact today.

“After the Oshkosh Airshow, [the group I met] and I continued to grow as friends,” she said. “They’re my mentors. They support me, and I get to support them through their growth and accomplishments, which has been a really cool and unique community.”

Aside from the community she found, Moore’s social media presence has given her opportunities she would have never imagined.

Pilots to the Rescue, a nonprofit organization dedicated to transporting rescue animals to their forever homes, reached out to Moore after stumbling upon her social media accounts. The missions are led by trained volunteer pilots who relocate animals throughout the East Coast, preventing the animals from being euthanized due to overcrowded shelters. 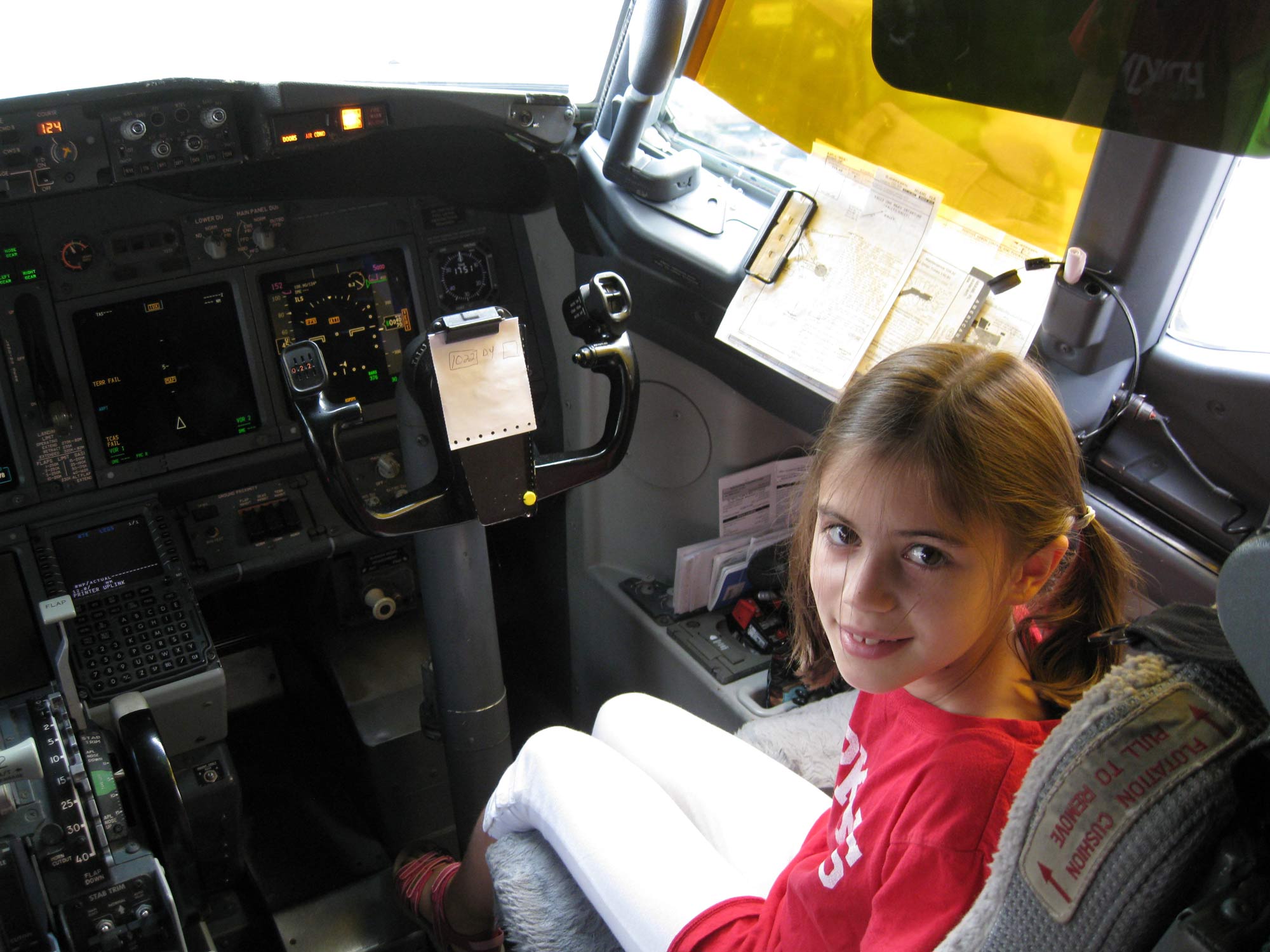 Starting when she was just 9 years old, Moore’s curiosity with aviation led her to the front seat of several aircrafts, allowing her to tour the cockpit and meet the pilots. (Contributed photo)

Moore joined Pilots to the Rescue in September of 2022. A few weeks later, she completed her first mission, relocating four animals to their permanent homes. With the help of her social media following, Moore was able to raise over $500 for the organization, exceeding her initial goal of $100.

“Pilots to the Rescue flew me and some other content creators out to New York for a fundraising event,” Moore said. “Since one of my discussion classes was canceled that week, I was able to go. We flew from New Jersey to Georgia and back to relocate four animals.”

As a woman in aviation, Moore describes the hardships that come with being in a male-dominated space.

“Being a young female pilot is tough, especially since no one in my family is in aviation,” Moore said. “I often say that ‘it’s hard to be what you can’t see,’ and before I had many friends on social media, I didn’t see any young or female pilots around.”

According to the International Collegiate Aviation Review, fewer than 8% of all commercial pilots were women in the year 2019. And when it comes to flying the largest airliners, the number is even smaller. “Less than 1% of wide-body [aircraft] captains are female, which isn’t something I really realized before I got into aviation,” she said.

While the number of young people in aviation is small, the number is slowly growing, especially post-pandemic.

“I’m growing into this community of young aviators, but it is not a large community,” Moore said. “There’s a huge pilot shortage right now since the pandemic, so that has really been advertised by the industry. It’s a growing niche, for sure.”

The flight hours she’s accumulating will keep her on track to become an airline pilot at a time when the industry is facing a shortage.

Moore hopes to declare a cognitive science major in the spring. Even though she wants to become a commercial pilot one day, Moore is embracing the versatility of UVA’s College of Arts & Sciences.

“While I do ultimately want to be an airline pilot, I’m enjoying using college as a place to learn about the world outside of aviation,” Moore said. “It is a pretty wonderful opportunity to have flying be a part of me and what I do, as opposed to the only thing.”

After graduating, Moore hopes to fly for Part 135 airlines, or private charters (named after a section of the Federal Aviation Administration code), to rack up the hours she needs to apply to be an airline pilot.

Moore advises anyone interested in flying to simply give it a try, especially young women.

“I was remotely interested in aviation, and now a year and a half later, I’m working on my commercial pilot’s license,” Moore said. “Even if you have just an inkling of interest in flight, explore it.

“For any women interested in getting into aviation, or any male-dominated industry for that matter, find your people. Find a supportive community because they do exist; you just have to look for them.”