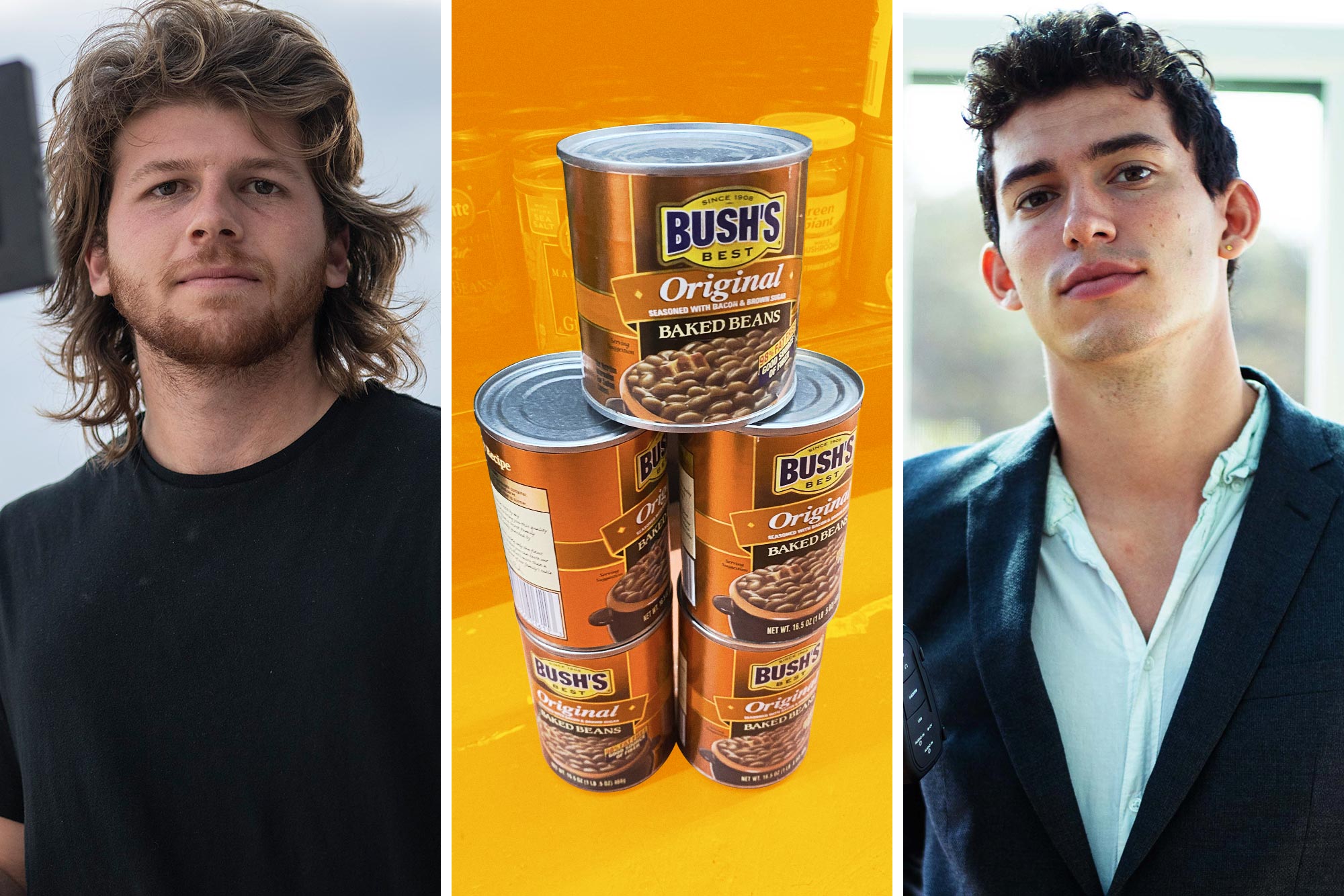 Graham Barbour and Phineas Alexander took home the ultimate prize in the “Can Film Festival:” $50,000 and the honor of having their video aired as Bush&#039;s new commercial. (Left photo by Sanjay Suchak, others contributed)

The 30-second spot opens with Rossini’s famous “Largo al factotum” from “The Barber of Seville.” Novice music fans might recognize the tune from “The Long-Haired Hare,” an old Bugs Bunny cartoon.

As the music lifts, the camera shows a young woman at an easel intently painting a canvas. She is recreating another famous piece of art, “The Creation of Adam,” a fresco by Michelangelo. But in her version, instead of two hands almost touching, one is passing a can of baked beans to the other.

She slowly dips her paintbrush into a can, but it does not contain paint. It’s a can of Bush’s Baked Beans. After applying another brush stroke, the painter looks thoughtfully at her brush and decides to take a taste. The next scene shows two people admiring the masterpiece in a gallery, with one remarking to the other, “She was ahead of her time.”

The same can be said of the two gonzo commercial directors, University of Virginia Class of 2021 graduates Graham Barbour and Phineas Alexander. Fresh from walking the Lawn last May, the two cinephiles set up shop in Richmond, launching Sly Dog Creative, a boutique firm that offers services in both film and photography.

“My friend and I for about two years have had an exchange of bean memes and just a running dialogue about bean humor,” Barbour said. “About a month ago, she texted me this link on Instagram and said, ‘You guys need to do this.’”

It was a link announcing the Bush’s Baked Beans’ “Can Film Festival,” a play on the name of the famous festival that takes place in Cannes, France. People were encouraged to submit original, 30-second spots for the chance to win $50,000 and the honor of having their video aired as Bush's new commercial.

Barbour said he came up with the concept for the commercial pretty quickly, then he and Alexander set to work finding talent and filming locations in Richmond.

Asked how they would describe the commercial, Alexander said, “high art.”

“It’s very much sort of our style,” he said. “It’s goofy and fun and whimsical and really just very silly.”

When the pair began scouting shooting sites, one plan was to sneak into a studio at Virginia Commonwealth University, but they thought better of that idea. They landed on an unheated, old Canada Dry warehouse on the outskirts of town.

“Poor Phineas and our friend Wes,” Barbour said. “It was about 35 degrees, and they were just dressed in sheets for a couple of hours.” (In the commercial, Phineas is on the left; Wes is passing him the beans.)

Their other shooting location was the Virginia Museum of Fine Arts.

From concept to finished product, it took the fledgling directors five or six days to get the commercial in the can. The cost? A lean $60, the price of having the “Creation of Adam With Beans” printed on a canvas.

They beat out about 300 other contest entries.

‘They’re Trying to Scam Us’

The two giggled over each other as they shared how they learned they’d won and how it almost didn’t happen.

“Now that’s the good part,” Barbour said on a conference call. “This is great.”

He said he’d received a direct message on Instagram from a “very suspicious account” days before the announcement was supposed to be made. He’d been poring over the contest rules, which spelled out that Bush’s Baked Beans was not responsible for any scammers who might try to steal people’s personal information. That put Barbour and Alexander on high paranoia alert.

“So I was waiting for a DM on Instagram from Bush's Beans, and I got one from a lady whose account looked very much fake, and she was basically like, ‘You won. Congratulations. Email your information to this address.’”

“I got a screenshot from Graham being like, ‘Oh, look at the scammer,’ and I was like, ‘Ha, ha, ha ha. Come on, man, they're trying scam us,’” Alexander said.

The day the announcement was expected, Feb. 28, Barbour got a phone message from someone named Randy who said she had been trying to let him know they won the contest.

“I’ve tried DMing you. I've tried calling you, emailing you, and I haven't heard any response. Like, you need to respond to me, otherwise we’re going to have to go and move on to someone else,” Barbour recounted.

Paranoia soon switched to elation. Barbour and Alexander were yelling so loudly their upstairs neighbor could hear the commotion. “We were freaking out,” Barbour said.

The elation has not stopped. Their commercial, a true masterpiece in its own right, aired twice this past weekend on ESPN2.

Barbour and Alexander say they earned a lot of their filming chops through their respective lines of study in media studies and studio art with a concentration in cinematography. They got even more hands-on training interning for several semesters for the video team in the Office of University Communications, of which UVA Today also is a part.

“We basically just did whatever they needed us to do,” Alexander said. “They had me going out and shooting a lot of stock footage of the University for awhile. We both worked a lot on the COVID stuff. And we made a bunch of video content for the University at large. We did the Valediction video and the Lighting of the Lawn video.”

Both also helped on the UVA Great and Good public service announcement, among other projects.

“Working with Erik and Vinny – honestly, we would not be even close to where we are right now if it were not for the whole video team,” Alexander said. “The amount of opportunities that they afforded us, and also just letting us shoot and touch cameras, gave us an experience that you couldn't get otherwise.”

Barbour added, “Kevin Everson, who teaches cinematography, and James Lam Scheuren, who’s a professor of photography here, both have been incredibly supportive and influential.”

The pair plan to continue in their creative pursuits and will use some of their prize money to fund them. Alexander is leaving for Poland soon to collect video coverage of the Ukrainian refugee crisis as a freelancer.

“Now that we've been fortunate to get this money, we can focus more on creative, lower-paying things like music videos and short films,” Barbour said.

The two plan to move to New York and meet up in October to continue their work through Sly Dog Creative. “It seems like New York is really the place where the people are who can really take our work to the next level,” Barbour said.

What Is Biotechnology? Where Is It Headed at UVA? END_OF_DOCUMENT_TOKEN_TO_BE_REPLACED