The Big Reveal in Fossil Research 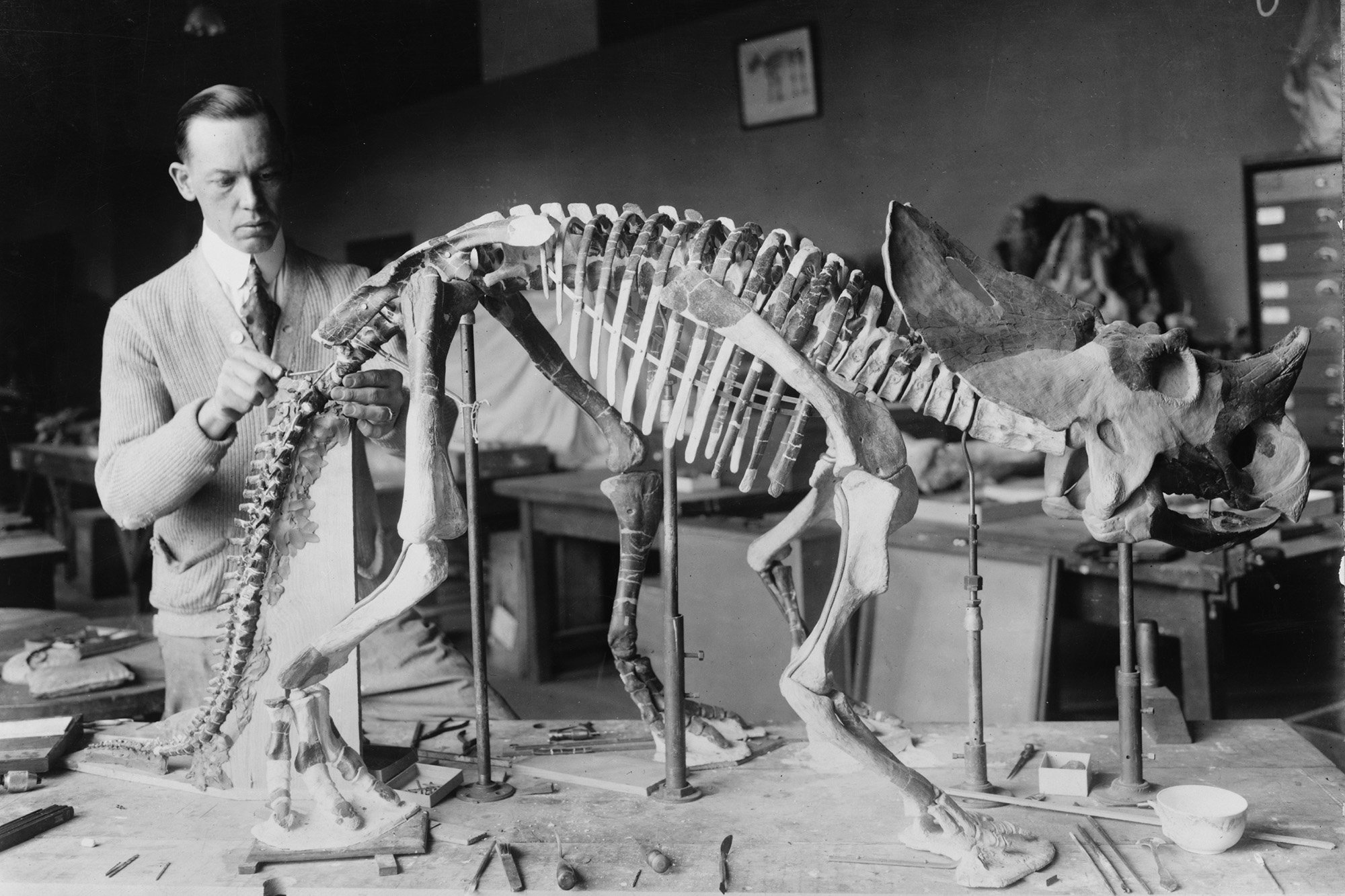 Norman Ross of the Division of Paleontology, National Museum, preparing the skeleton of a baby dinosaur some 67 or 68 million years old for exhibition in 1921. (Library of Congress)

Far from the public eye, clever hands and minds quietly make it possible to see and study dinosaurs and other prehistoric species. Those hands and minds belong to workers called “preparators.”

While an undergraduate at the University of Chicago, Caitlin Wylie worked in the lab of well-known paleontologist Paul Sereno – a prolific discoverer of dinosaur skeletons – preparing fossils for research by carefully scraping rock off bones and gluing broken bones together.

“I liked the total focus it required,” said Wylie, now an assistant professor of science, technology and society in the Department of Engineering and Society at the University of Virginia School of Engineering and Applied Science. “I could sit in the lab quietly for hours working on a bone. It was a nice break from classes and studying because it involved using my hands.”

Although Wylie loved the job, it wasn’t the dinosaurs, but the preparators who captured her imagination. Years later, she recently published a book, “Preparing Dinosaurs: The Work Behind the Scenes,” which, among other things, explains how those magnificent museum displays of dinosaur skeletons are assembled.

“So, you know that scene in ‘Jurassic Park’ where they have a complete, gorgeous skeleton lying in the sand and the paleontologists are dusting it with a paintbrush?” Wylie recently said in a podcast interview. “No, that’s not real.”

Then, as now, research for Wylie – who would go on to earn a master’s and Ph.D. in the Department of History and Philosophy of Science at the University of Cambridge – meant examining the social aspects of how science gets done.

To gather evidence for the book, Wylie conducted ethnographic studies at 14 fossil preparation labs in museums and universities. She interviewed more than 60 scientists, conservators, collection managers and exhibit designers and talked with countless preparators as they hunched over fossils at a workbench.

We asked Wylie what led to the book and what her research uncovered. One revelation is good news for lifelong dinosaur lovers: Almost anyone can be a fossil preparator. 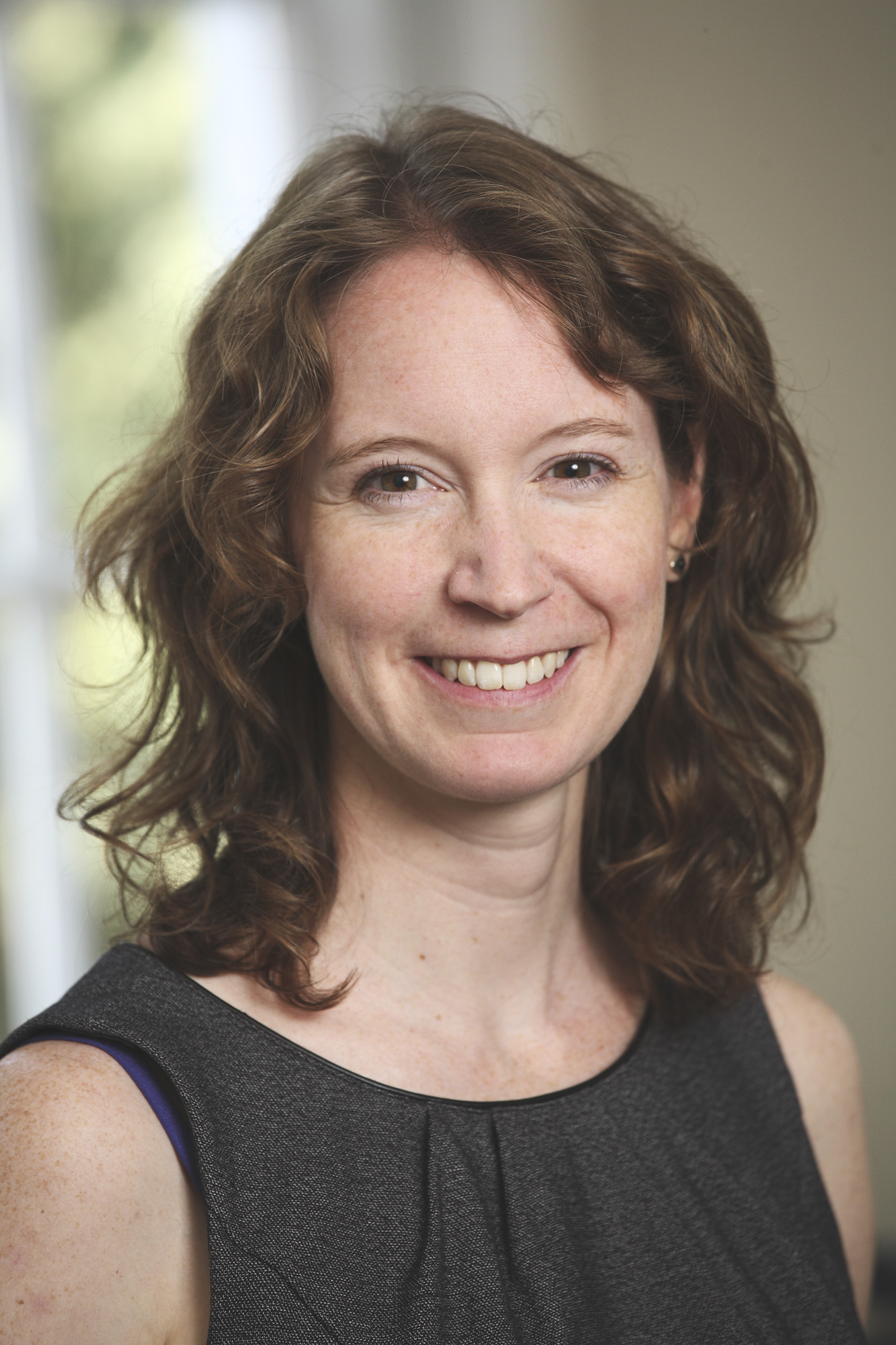 Q. What made dinosaur preparators a compelling topic for you?

A. I spent a term volunteering as a preparator at the Natural History Museum in London. By then, I thought I knew what I was doing, but when I asked for the pen-sized pneumatic drills and permanent glues we used in Chicago, the preparators in London were shocked. I quickly learned preparators in the U.K. remove as little rock as possible, and they only use glues that can be dissolved away and other chemically inert materials, such as particular plastic cushions to line specimen trays. This approach is intended to protect fossils from falling apart over the long term.

How a vertebrate fossil is prepared, and by whom, is rarely recorded in specimen records or published papers. I was intrigued by how scientists could compare and interpret fossils that had been prepared with such different techniques and mindsets, without even knowing which techniques or mindsets or even people influenced how those fossils look.

I began to study technicians’ contributions to science in part to call attention to the skillful, beautiful work my mentors were doing that went largely unrecognized by scientists and institutions, and in part because I wondered what it means in practice to transform nature into reliable scientific evidence. This is a primary question of my field of science and technology studies.

Q. What surprised you the most among your findings?

A. Vertebrate fossils are unique, both because they come from individual animals and because they have undergone their own journey of chemical and physical transformation to become fossilized. Preparators choose techniques to match each fossil’s size, shape, fragility, surrounding rock and scientific importance. Rather than relying on established techniques and protocols, as technicians tend to do in other sciences, preparators regularly draw on their own creativity and skill to adapt existing tools and techniques and design new ones.

“You know that scene in ‘Jurassic Park’ where they have a complete, gorgeous skeleton lying in the sand and the paleontologists are dusting it with a paintbrush? No, that’s not real.”

Most preparators told me that this expert tinkering is their favorite part of the job. I expected them to talk about research and science and nature, which they did sometimes, but they mostly described their jobs in terms of what they call “creative problem-solving,” such as sharpening a tool tip into a particular shape to reach an inaccessible area of rock, deciding how much rock they should remove to give scientists the most useful view without damaging the bone, and judging which bone fragments fit together and how to best glue them. These decisions show the critical importance of each preparator’s skill and judgment to successfully produce fossils that can serve as evidence of past life.

Also, they all included aesthetics in their decisions, but they had different ideas of what that meant. That surprised me at first, because I assumed technicians would talk about specimens in a neutral, objective way. Instead, they worried about whether to smooth away tool marks in the surrounding rock, whether to match the color of a replacement piece to the bone around it, and whether to remove bones to see what lay in the rock beneath them or leave them in place.

They are proud of their work, and they want prepared fossils to be beautiful.

Q. What did you discover about how and why people get into this kind of work?

A. Like the fossils they reveal, preparators themselves are unique. Unlike technicians in most sciences, preparators do not share the same academic degrees or professional training. Instead, they learn from each other and from experience on the job. Most preparators credit their creative problem-solving, fine-motor skills and patience – which they consider necessary abilities for preparing fossils – to a variety of former careers, such as carpentry and making art, or hobbies, such as jewelry-making, baking and doing puzzles. This variety of backgrounds is unusual in scientific careers, to say the least.

Q. You argue that this research community could be a model for other disciplines to incorporate nonscientists into their research. Why do you think that is?

A. Nonscientists already play crucial roles in all research; they just aren’t recognized for their work by scientists or by the rest of us. A first step would be to acknowledge and celebrate the work of everyone who contributes to research. This could be explained in scientific papers, in museum exhibits, through public outreach events such as lab tours and citizen science projects, or online events that go “behind the scenes.” 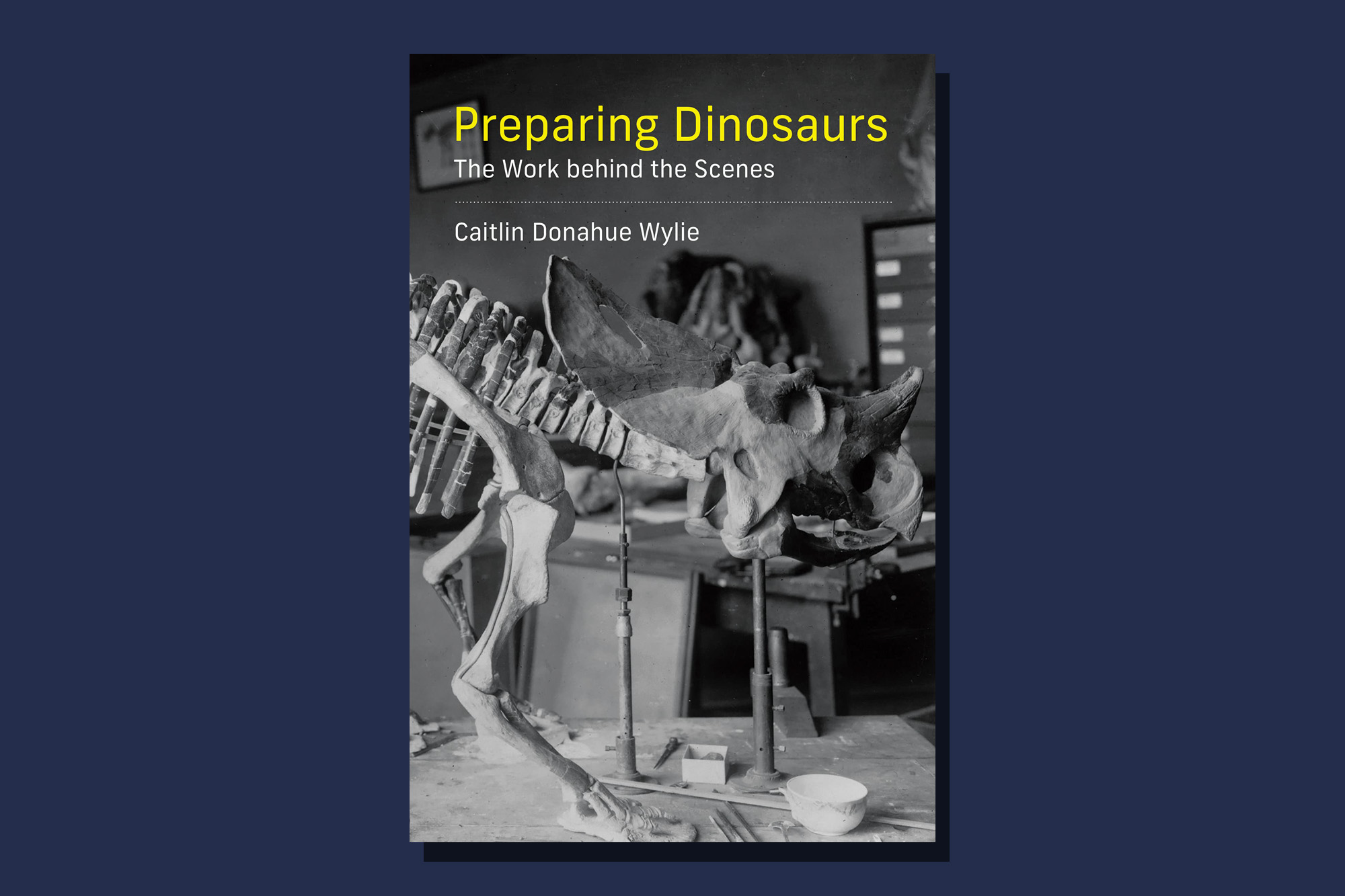 For example, some museums, including the Smithsonian [National Museum of Natural History], have glass-walled fossil preparation labs where visitors can watch preparators at work. These display labs are a powerful way to show science in action and could work for a variety of disciplines.

Also, because most preparators are volunteers, anyone can try it. In the labs I studied, there were often high school students working alongside retirees. This is an incredible opportunity for people to contribute skilled labor to science.

And there is an abundance of vertebrate fossils waiting to be prepared, and an enormous backlog of other kinds of specimens in museums that need to be cleaned, organized, entered into databases, digitized, etc. Museum volunteers could stay busy for generations. The problem is there isn’t enough funding to pay for all this work. This means that museums and scientists really rely on volunteers. This makes volunteers very important – but it would be better, of course, if this work were well-funded so that more people could do it as a career.

I suggest that the same model of hiring workers (or volunteers) based on their skills, rather than their credentials, could apply to any research. Even engineering research relies on work that most people can learn to do, such as maintaining equipment, cleaning glassware and organizing datasets. This is one reason why universities let undergraduate students work in labs like I did. Ideally, it’s good experience for the students and useful work for the researchers.

Q. How would the model be empowering for nonscientists? And how would it benefit society?

A. Nonscientists who participate in research get to learn how science works, including the quirks and foibles and creativity and artistry alongside the technical and theoretical aspects. This is empowering to understand that science is not magical or incomprehensible. It is just one category of important work done by people.

For researchers, working with people who have different backgrounds from themselves helps provide new ideas, challenge their assumptions, and learn what questions and issues matter to the public. These relationships can help researchers produce more socially relevant research.

Q. MIT Press is providing open access to the book, meaning it is free to download. Why?

A. Knowledge should belong to everyone, but academic books and journals are expensive. Open access creates opportunities for more people – and more kinds of people, beyond academics – to learn from that knowledge.

That said, I wrote my book for academics in my field, so it might not interest everyone! But it’s important to let readers decide that for themselves. Hopefully, as open-access publishing grows, we authors will learn to write for broader audiences. Thanks to donations from the Arcadia Fund of Lisbet Rausing and Peter Baldwin, anyone can download “Preparing Dinosaurs.”

At UVA, There Is a Club for Everyone END_OF_DOCUMENT_TOKEN_TO_BE_REPLACED