Board Approves New Professorship in Honor of Revered Economics Professor 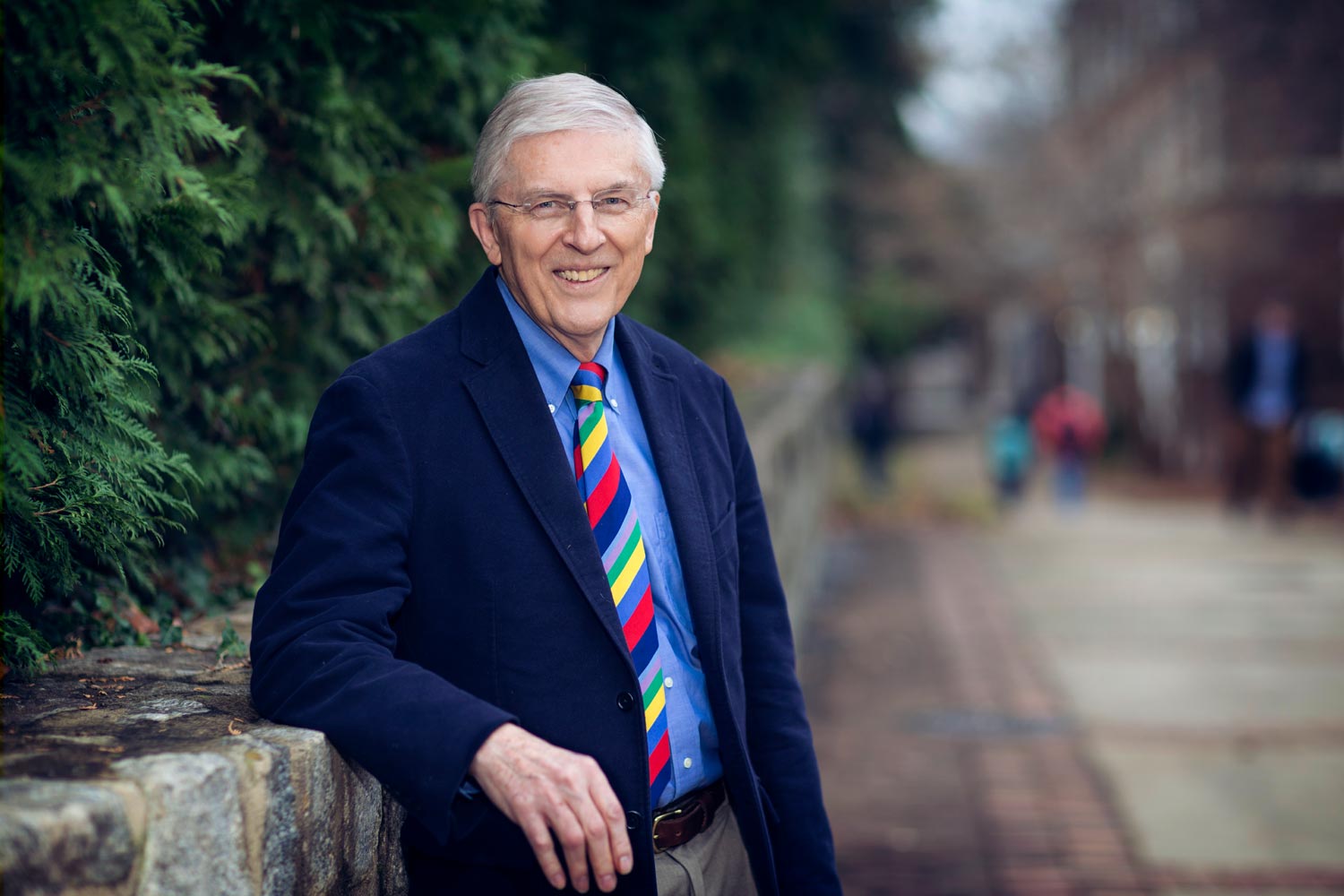 Ken Elzinga has taught economics to more than 45,000 students in a University of Virginia career that dates back five decades, and the Robert C. Taylor Professor of Economics’ classes remain among the largest and most popular on Grounds.

As his 500-student “Introduction to Microeconomics” courses continue to draw wait lists every year, a new professorship in the College and Graduate School of Arts & Sciences has been created in Elzinga’s honor to celebrate his remarkable achievements as a scholar, beloved teacher and mentor to generations of UVA graduates.

The creation of the recently endowed Kenneth G. Elzinga Professorship in Economics and the Law was announced today following the Board of Visitors’ formal vote of approval. Nearly 500 alumni, parents, students and other supporters have committed $3 million to the endowment fund created by the Department of Economics.

The range of donors stretches from alumni who graduated in the late 1960s to current students, all of whom share memories of engaging and enthusiastic class lectures, as well as the time he dedicated to forging personal relationships with them.

“Ken Elzinga exemplifies everything we want our faculty to be,” contributor Peter Lyons, a 1977 graduate, said. “He is the best classroom teacher I have ever seen and a recognized leader in his field; most importantly, he is a caring and compassionate man who works every day to help UVA students become better people.”

“Though he teaches hundreds of us each year, he has a remarkable way of reaching his students individually, spending extra time and resources to ensure that they are meeting their potential both in economics and in life,” donor Jesse White, a 2016 graduate, said. “He epitomizes what it means to be a professor, a leader and a grounded person in general, and I hope future students will have the opportunity of a similar experience.”

According to the University’s Office of Institutional Assessment and Studies, Elzinga has taught more students than any other professor on record at UVA. His academic department credits his legendary reputation as a teacher and scholar with fueling the popularity of economics as a major. According to the Department of Economics, about 15 percent of the College’s graduating classes traditionally major in that field. His introductory course on the principles of microeconomics attracts more than 1,000 students each academic year.

“I am, of course, honored to have an endowed chair named after me – any professor at UVA would be,” Elzinga said in an email, before adding with his usual humor, “However, the honor has caused a few complications in my life. Several people, upon learning there was an endowed professorship in my name, assumed this meant that I had retired, which I have not (I'm teaching almost 1,000 students this fall). A couple people assumed it meant that I had died (which also is not true).”

Elzinga’s distinguished teaching career is dotted with the most prestigious awards presented at the University, including the Thomas Jefferson Award and the first Cavaliers’ Distinguished Teaching Professorship. The Southern Economic Association now provides an annual teaching award in Elzinga’s name.

A prominent scholar of antitrust economics, Elzinga has worked and testified on a number of high-profile, precedent-setting antitrust cases, including three cases argued before the U.S. Supreme Court. The upper-level “Antitrust Policy” course that he teaches frequently has a two-year wait list to enroll. Charles A. Holt, Elzinga’s colleague in the Department of Economics, said the track record of Elzinga’s former “Antitrust Policy” students who have gone on to excel at top law schools and consulting firms speaks to the depth of his expertise and ability to convey that knowledge.

“Ken not only teaches the material as only he can, he also has helped shape antitrust case law with his arguments before the Supreme Court about vertical price maintenance,” said Holt, the A. Willis Robertson Professor of Political Economy.

A dapper dresser known for the collection of brightly colored ties that he wears to class, Elzinga continues to mentor his teaching assistants and students, including the select group of economics majors who serve as teaching fellows for his “Introduction to Microeconomics” courses.

Holt said he marvels at Elzinga’s passion and tireless advocacy for his students.

“He writes over a hundred recommendation letters for students each year, and he makes many phone calls on their behalf. He often comes in before 7 a.m. for small meetings with students, and on days with office hours, he stays late, sometimes very late, until the last person leaves,” Holt said. “I once wrote a paper with a title that began ‘Ten Treasures of Game Theory.’ Ken is surely one of the 10 treasures of the University of Virginia, and I might have trouble naming nine others who have had a comparable influence.”

Another colleague in economics, professor David E. Mills, called naming a professorship in law and economics for Elzinga “a splendid way to recognize his career-long contribution to the University and its students.”

“Ken’s research and writing in antitrust economics has extended his reputation far beyond the bounds of the University,” Mills said. “He has mentored countless undergraduate students during and after their days at UVA, and University alumni remember and revere him for the interest he took in them and the moral example he supplied during their formative years.”

As Elzinga continues to teach, the University now prepares to find and recruit the gifted teacher and scholar eager to serve as the first appointment to the endowed professorship created in his name.

A Year We Will Never Forget: 2019-20 in Review END_OF_DOCUMENT_TOKEN_TO_BE_REPLACED

‘What Will You Carry With You?’ Remarks From UVA President Jim Ryan END_OF_DOCUMENT_TOKEN_TO_BE_REPLACED