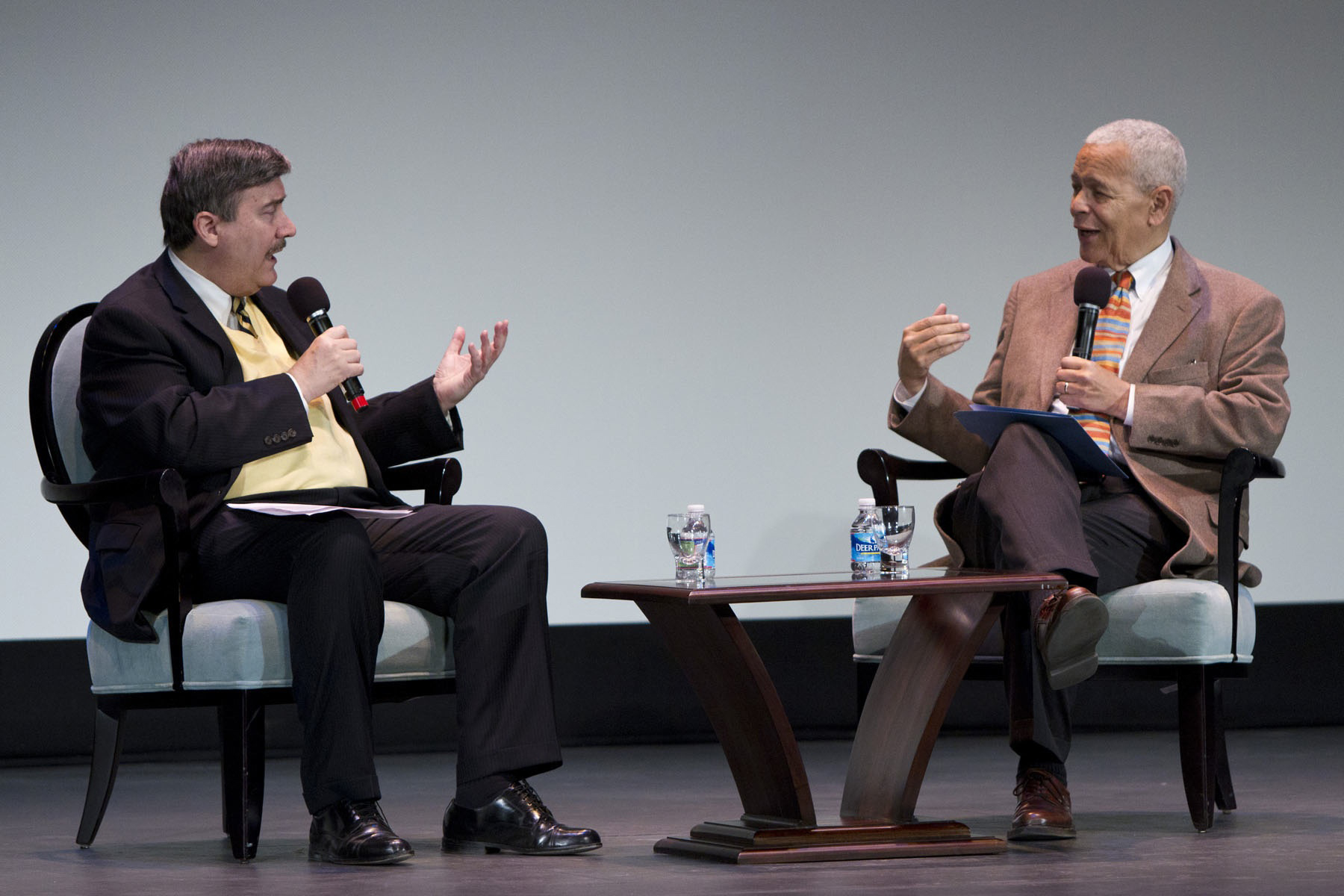 January 26, 2011 — When the Freedom Riders rode buses through the Deep South in 1961, white and black sitting side by side following a 1960 Supreme Court decision overturning Jim Crow bus segregation laws, their non-violent repose in the face of mob violence and police beatings – and the resulting images of bloodied faces, blackened eyes and missing teeth – made front-page news around the world, and helped turn public opinion in support of the Civil Rights Movement.

Several hundred people revisited that episode in American history on Tuesday evening at a screening of the acclaimed documentary, "Freedom Riders," in the Paramount Theater as part of the University of Virginia's Martin Luther King Jr. Community Celebration.

In an introduction to the film, Larry Sabato, politics professor in the College of Arts & Sciences and director of U.Va.'s Center for Politics, interviewed U.Va. history professor Julian Bond, a former chairman of the National Association for the Advancement of Colored People, who explained some of the inside story of the Freedom Rides.

Among the lesser-known parts of the story, as Bond explained, are how Martin Luther King's decision not to personally join the ride opened the first rift within the Civil Rights Movement, and how the Kennedy administration stood aside and declined to support the riders until after the public saw the brutal images and demanded intervention.

At the time the rides began, Bond was 21. A year earlier, he had helped found the Student Nonviolent Coordinating Committee, geared toward college students and the younger generation, which went on to play a major role in the Civil Rights Movement.

Bond met with some of the Freedom Riders over dinner as they traveled from Atlanta to Birmingham, Ala. At the time, he had little sense of the full extent of the violence and danger that lay ahead for the riders, he said.

The riders were trained on how to maintain a non-violent response when beaten, including protecting one's groin and eyes, but even today their courage is striking, Bond said.

"You can't help but be impressed with the incredible courage of these people who knew they were going into certain danger," he said. "They could have suspected that death was a possibility."

When King was asked to join the riders as they left Atlanta, he declined, noting that he was on probation from a previous arrest. Some speculated that King didn't want to compromise ongoing negotiations with the White House about ways to support the movement and civil rights legislation.

Many of the young people involved in the movement were "contemptuous" of this refusal, Bond explained. They saw King as the leader of the whole Civil Rights Movement and thought he had a responsibility to participate.

"We just couldn't understand why we would go, and he wouldn't go. The excuses he offered didn't seem to make sense to us. This was the beginning of some disillusionment with him, and some feeling that he wasn't quite the guy we thought he was. We loved him, but he dropped slightly in our estimation of him," Bond said.

After the riders became front-page news around the world, King spoke up, aggressively demanding federal protection for the riders, but still refrained from joining them, Bond said. The decision created a generational rift within the Civil Rights Movement, between King and his generation of leaders and the younger Freedom Riders.

When the violence erupted, the Kennedy administration claimed it was blindsided, but "you can't trust what John and Robert Kennedy said about this," Bond said. Trying to avoid alienating white Southerners, the administration had generally opted not to support the movement.

"It took escalating violence to make them do anything at all," Bond noted.

Only after Americans had watched the "awful" beatings in Birmingham and Anniston, Ala., and began to demand an end to the violence and protection for the riders, did the Kennedy administration finally intervene and "did better than one would expect," Bond said.

Directed by Stanley Nelson, the film "Freedom Riders" was recently nominated for a 2011 Writers Guild of America Award for Best Documentary Screenplay.

The event was co-sponsored by the U.Va. Center for Politics, the Virginia Film Festival, the Quality Community Council of Charlottesville, and the Albemarle-Charlottesville NAACP.