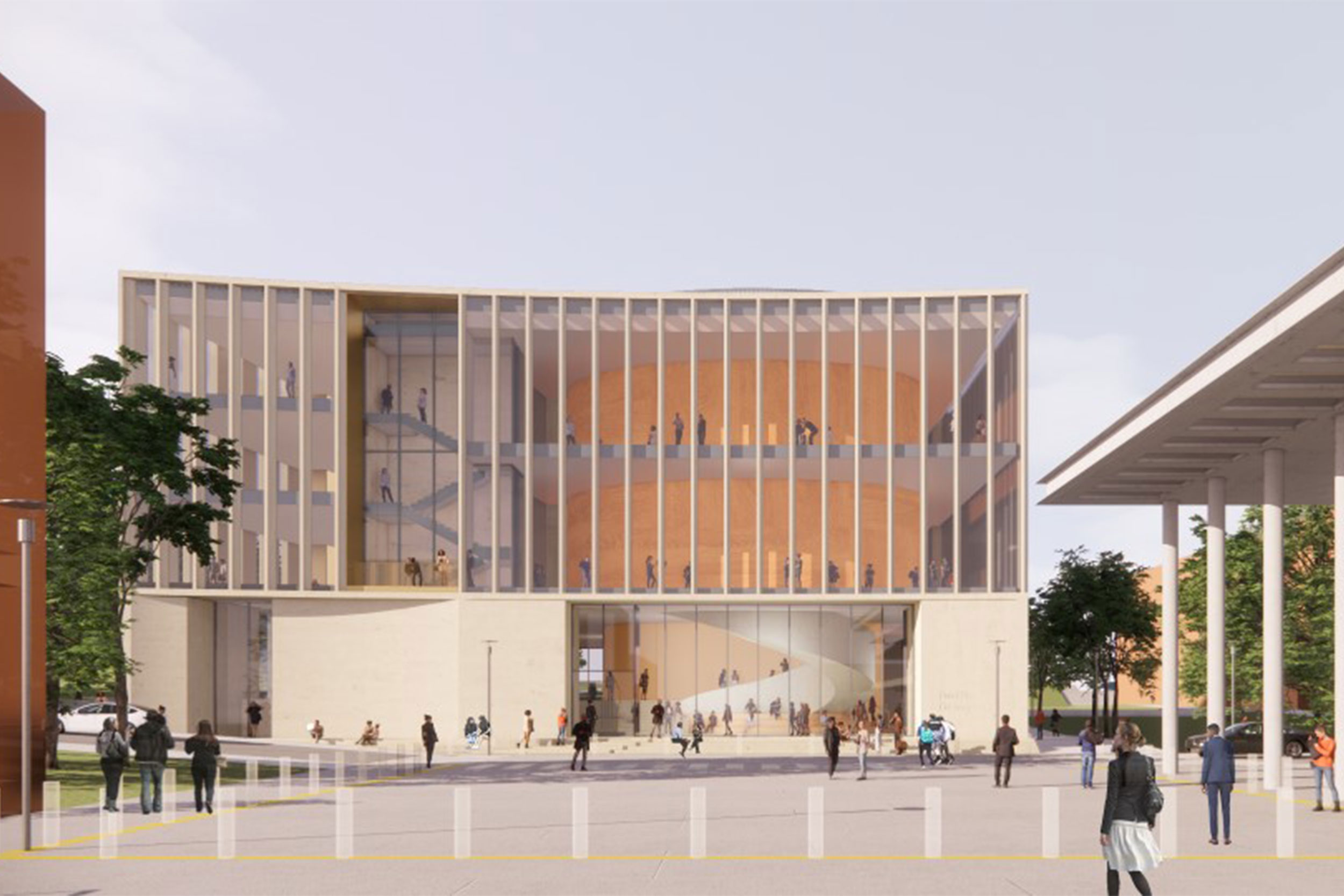 The Karsh Institute of Democracy’s building is envisioned as an educational ecosystem designed to support scholarship and engagement around the challenges that face democracy. (Höweler+Yoon)

The University of Virginia Board of Visitors’ Buildings and Grounds Committee reviewed plans and preliminary drawings Thursday for the future home of the Karsh Institute of Democracy, a 65,000-square-foot facility, the project that was approved by the board in June 2021 to be the second academic building constructed as part of the redevelopment of the Emmet-Ivy Corridor.

Announced in 2021 after a $50 million gift from Martha and Bruce Karsh, the Karsh Institute of Democracy’s building is envisioned as an educational ecosystem designed to support scholarship and engagement around the challenges that face democracy.

“There was a great deal of thought and discussion about the message of democracy and how it might influence our thinking about the design of the building,” Alice Raucher, architect for the University, said. “The idea that this building is going to be a place of education, active discussion, and open to all people, was very inspiring to us. In fact, we were charged by the President’s Emmet-Ivy Task Force to ‘create a welcoming, inviting and inclusive place where local residents, visitors and the University community interact.’”

The design team, led by Höweler + Yoon Architects with Hanbury Architects, in collaboration with representatives from the Office of the Architect for the University, Facilities Management, the Karsh Institute and the Batten School, developed a schematic design for the Institute.

The four-story facility will include a 425-seat, state-of-the-art auditorium for in-person and globally broadcast events. The building will also include classrooms, a media production suite, offices and meeting and research areas.

“Clearly, we want a design that speaks to democratic ideals and promotes healthy debate and discourse far into the future,” Raucher said. “This project and this site have many layers of meaning, with the opportunity to relate the Emmet-Ivy Corridor to the Academical Village.”

Raucher said the project will meet the highest level of Leadership in Energy and Environmental Design standards and that the building will help the University achieve its 2030 and 2050 sustainability goals.

Board members and University leaders had a spirited discussion on Thursday about the initial design, its materials and how the proposed design of the Karsh Institute relates to existing architecture at the University. Several requested that the next iteration of the project’s proposed design include elements, such as brick features, that might signal more clearly its connection to other UVA buildings and structures.

Raucher said the design team would bring additional schematics to the board for review at its March meeting.

The Buildings and Grounds Committee also reviewed and approved a revised schematic design for the Olympic Sports Center, designed to provide support to all 750 student-athletes competing in 27 varsity sports. The plans also call for the renovation of the McCue Center, which currently serves as the home of Virginia football and the primary office building for athletics administration and a majority of coaches.

“We moved forward first with the football building, completing the drawings and breaking ground for construction,” Raucher said. “As we developed the drawings for the Olympic sports center, we were facing ever-increasing construction costs due to inflation and we made some changes to bring the costs down, which changed some of the exterior details, decreased the size of the entry lobby, and made the plan more efficient.”

In other business, the committee approved naming the hotel and conference center at the Darden School of Business the Frank M. Sands Sr. Hotel at Darden and Conference Center for Lifelong Learning/The Forum Hotel.