Building a Network: How Data Science School Will Make Connections Across UVA 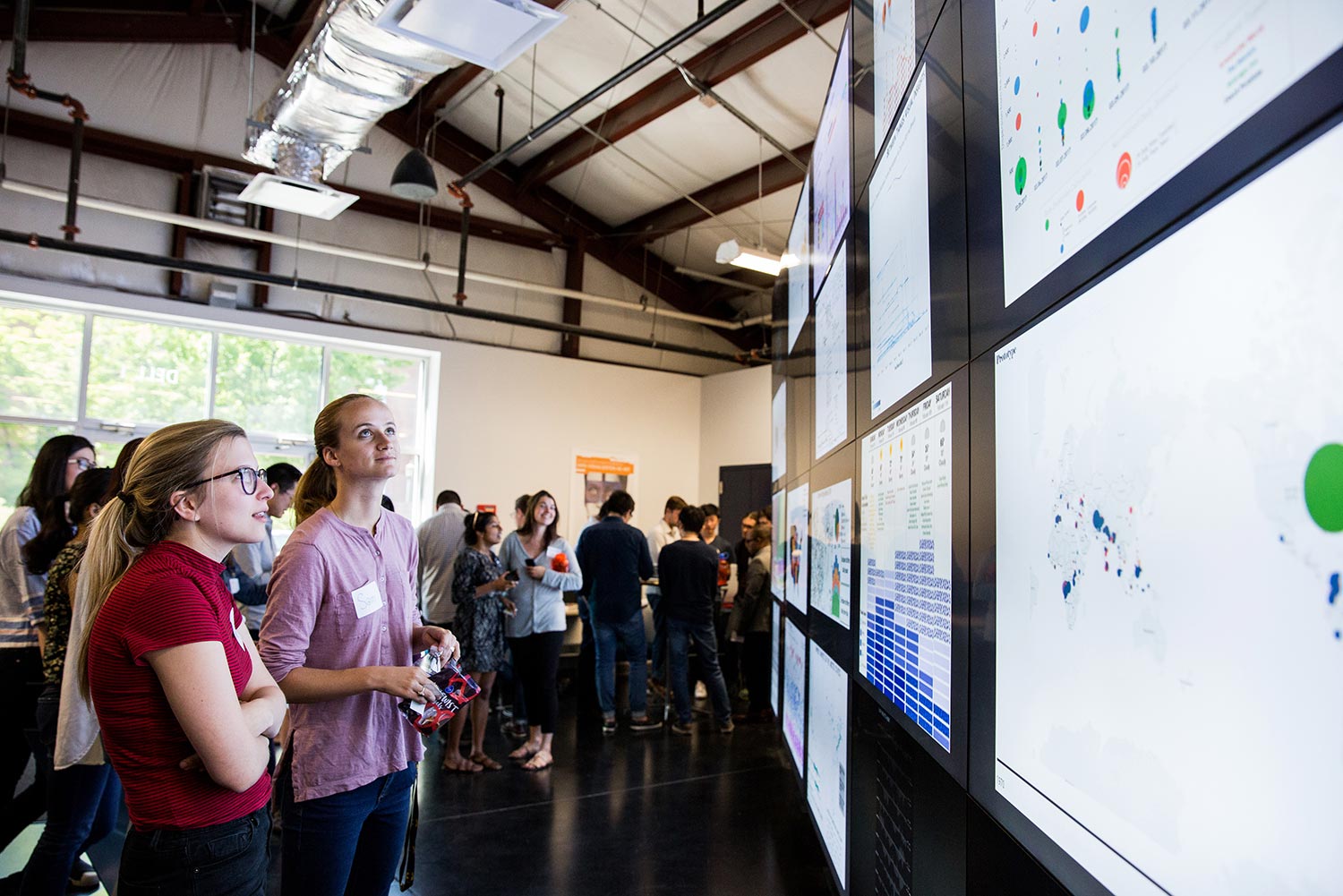 A few years ago, University of Virginia computer science professor Christopher Barrett and a team of researchers ran a computer simulation that left them scratching their heads.

It wasn’t a happy simulation, Barrett said: They wanted to understand what could happen if a nuclear weapon were to detonate in a city of 4 million people. The simulation was programmed to consider the situation in extraordinary detail – every adult, every child, and what they were doing; every car, bus, train, lamppost and traffic light; every doorknob on every door in every room of every building on every street in the city; the material each thing was made of, and much, much more.

Over the course of 38 hours, the model produced 250 terabytes of output data. To put that in perspective, that amount of data is roughly equivalent to streaming Netflix non-stop for 27 years.

Perplexed, the scientists took a closer look. The simulation showed that the first avatar was a 16-year-old boy, who entered the radiation field to look for his mother (the second avatar), who had died from radiation exposure before her son could find her.

And while the computer-generated avatars didn’t feel anything, the scientists sure did. They were “shocked,” said Barrett, the executive director of UVA's Biocomplexity Institute.

It was a moment that could have been lost in the data – they’d simulated mayhem, after all. But the extraordinarily large data sets were designed to help researchers minutely predict and study behavior, and that rich data allowed them to more exactly simulate and learn from a real-world situation. For example, Barret and his team realized that perhaps immediately bringing back emergency cell service – allowing the second avatar to contact the first before he entered the radiation field­ – could make a substantial difference in saving lives.

It took people from many different backgrounds to make sense of that huge amount of data, organize it and clearly present that information to a public audience, and it’s just one example of the power of data science – a discipline that is growing rapidly on Grounds.

On May 2, the UVA Faculty Senate voted unanimously in favor of a plan to create a School of Data Science at the University. Pending approval from UVA’s Board of Visitors and State Council of Higher Education for Virginia, the school will build on activities already being realized within UVA’s Data Science Institute and expand its reach across Grounds and in the community.

A School of Data Science would enable research collaborations across fields to solve real-world problems, provide students with interdisciplinary opportunities to learn technical and practical skills and go on to create positive impacts in a variety of industries and organizations, and build a network of partnerships that produce innovative ways to work together.

New Growth From a Strong Foundation

In January, the University announced a $120 million gift from the Quantitative Foundation, founded by alumni Jaffray and Merrill Woodriff. Jaffray Woodriff is also a board member at the Data Science Institute, which also was created in 2013 through a gift from the Quantitative Foundation. The historic gift will be used to grow the institute into a school that would be able to build an academic and research program connecting disciplines across Grounds and in the community.

The institute’s faculty and administration are currently in the process of designing the school, which Phil Bourne, Stephenson Chair of Data Science and director of the Data Science Institute, said will build on the interdisciplinary foundation established and fostered by the institute, which counts among its affiliated faculty experts from various fields of study and schools at UVA, including the School of Engineering, the Curry School of Education and Human Development, the Darden School of Business, the School of Medicine, the College of Arts & Sciences and more.

The planned Data Science School, like the institute from which it springs, will be an intentionally interdisciplinary ecosystem, the institute’s founding director, Don Brown, said. Scholars in various departments within UVA’s other 10 schools share resources, research and ideas, all for mutual benefit.

The institute was founded with a commitment to “using data science to improve the way things function and operate … and in ways that are respectful of ethics and policy,” Brown said. This means training data scientists to consider not just the data itself, but how it is being collected, with what intention and what methods; who is analyzing it and what biases that person (or the algorithm they build) might have.

Kevin Skadron, chair of the Department of Computer Science at UVA, said he supports the creation of a School of Data Science to bring the field of study to full fruition, “both within UVA and in the world at large.”

“Creating a school with the kind of resources enabled by this generous donation gives UVA an opportunity to establish itself as the international leader in this emerging discipline,” he said. “This, combined with the incredible resources of UVA as a comprehensive university with great strength in many of the related disciplines, gives students the chance to get a unique education that I don’t believe is feasible anywhere else. This will make UVA graduates into well-rounded leaders in data science, and from a practical standpoint, create wonderful opportunities for high-impact and fulfilling careers for our students.”

But as far as Bourne knows, there are no other officially established schools of data science. He hesitates to say that UVA’s will be the first, but if it’s not, it will be among the first. And, he says, the benefits are numerous, for the whole University.

It means more faculty thinking about data across many disciplines, which means more visibility in the field, which in turn leads to more success in recruiting top-notch faculty and graduate students, which means more resources, which beget better prospects for all departments and schools.

Michael Prichard, CEO of Charlottesville-based company Skafos.ai (formerly Metis Machine), which helps create machine-learning-powered apps for a variety of clients, can attest to the quality of graduates the Data Science Institute has turned out of its existing Master of Science in data science program. Two of Skafos’ three data scientists came through the institute, and Prichard said he’s “really impressed” with how hands-on they are, how they dig in to a problem and figure it out as best they can, in a timely fashion, knowing a product has to be released into the commercial world.

It’s clear, Prichard said, that the UVA institute gave them a foundation that functions not just in an academic setting, but in the real world.

With a School of Data Science at UVA, “Charlottesville could become a hotbed for data science, from academic to commercial use,” Prichard said, and it’d behoove both applications of the discipline to exist in such close physical proximity.

But all of this data science work isn’t just relevant to UVA’s academic standing and the tech industry; it can, and should, do a lot for the Charlottesville community as well, Bourne said.

The institute has already partnered with Charlottesville Fire Chief Andrew Baxter and the Charlottesville Fire Department’s own data scientist, working on a number of projects with students and faculty. Currently, the fire department is working with the institute on creating an interactive digital visualization of existing Charlottesville fire risk data for the general public. Baxter said the collaboration has yielded “phenomenal” results so far, and he intends to continue the partnership.

As projects undertaken at the institute in partnership with UVA schools like Curry, Darden, Engineering and the College have shown, when many different minds work together to understand a situation – when teams include researchers from data science, humanities, engineering, policy, medicine, and elsewhere – impactful solutions can result from these collaborations.

Over the course of a career that’s spanned four decades, “I’ve never witnessed anything so game-changing” as the emergence of the field of data science, Bourne said. He predicts that data science will not only change society in dramatic fashion, it will also shift the landscape of higher education.

“That’s what excites me, among many other things,” Bourne said about growing the institute into a School of Data Science. “I think we can become an exemplar of what higher education can be.”

What’s Next for UVA’s Class of 2022? END_OF_DOCUMENT_TOKEN_TO_BE_REPLACED