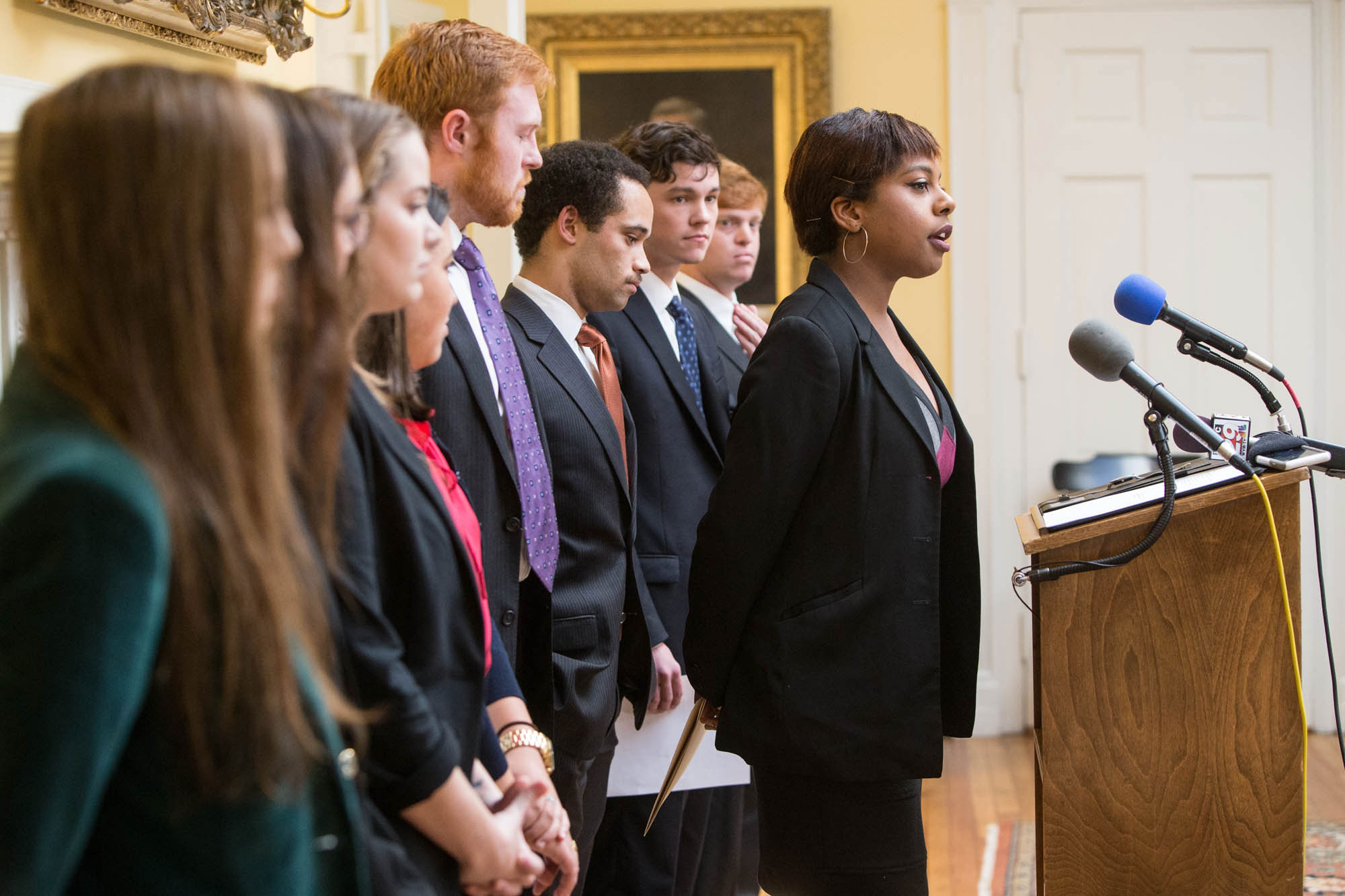 Student leaders at the University of Virginia publicly resolved Monday to find a solution to sexual violence in the wake of a magazine article that detailed a horrific sexual assault two years ago at a school fraternity.

Student Council President Jalen Ross said at a press conference with other student leaders that the Rolling Stone magazine article was a “wakeup call.”

“Sexual assault is a problem that needs our undivided attention,” he said. “Thousands of us this week have committed to responding to this hard problem with hard work and I hope that each and every one of you will join us in doing that.”

Ross said there is no easy answer.

“United, we will have the strength for decisive action; divided we will flounder. We must be one community committed to this. One student body. One University,” he said. “This is our problem to solve.”

Taking the podium, Reid said members of the Inter-Fraternity Council were “horrified and viscerally saddened” by the stories of sexual violence in the Rolling Stone article.

On Saturday, President Teresa A. Sullivan announced the suspension of all fraternal organizations and associated social activities until Jan. 9.

“The temporary suspension of fraternities gives our community a time to breathe and to develop substantive and actionable changes that confront this complicated problem in the long-term,” Reid said.

He said all members of the University community share a common goal.

“Greek, non-Greek; female, male; professor, student; we are all allies in the fight against sexual violence,” he said. “No individual alone can solve this cultural problem — it takes a strong and committed community. Over the next month and beyond, we will stand — together — as that community.”

One Less President Ashley Brown said the situation has given U.Va. the opportunity unite and say “enough.”

“The accounts listed are part of a national epidemic for which U.Va is an example,” she said.

Other events were also scheduled for Monday, including a 6 p.m. roundtable discussion in Newcomb Hall on how to support sexual assault survivors and an 8 p.m. meeting of the Alliance for Social Change at U.Va., also in Newcomb Hall.

There have been several rallies in support of sexual assault survivors and against sexual assault at the University since the Rolling Stone article was published last week. Hundreds of students and professors marched Saturday night to the Phi Kappa Psi fraternity house, where an unidentified student told Rolling Stone magazine she was raped two years ago. Phi Kappa Psi voluntarily suspended its affiliation with the University ahead of Sullivan’s action Saturday and the house has been vacated.

U.Va.’s Board of Visitors is holding a special meeting Tuesday to discuss the University’s policies and procedures regarding sexual assault.

A live stream of the meeting can be found at: www.virginia.edu/bov/live.

What Is the ‘4th Side’? END_OF_DOCUMENT_TOKEN_TO_BE_REPLACED