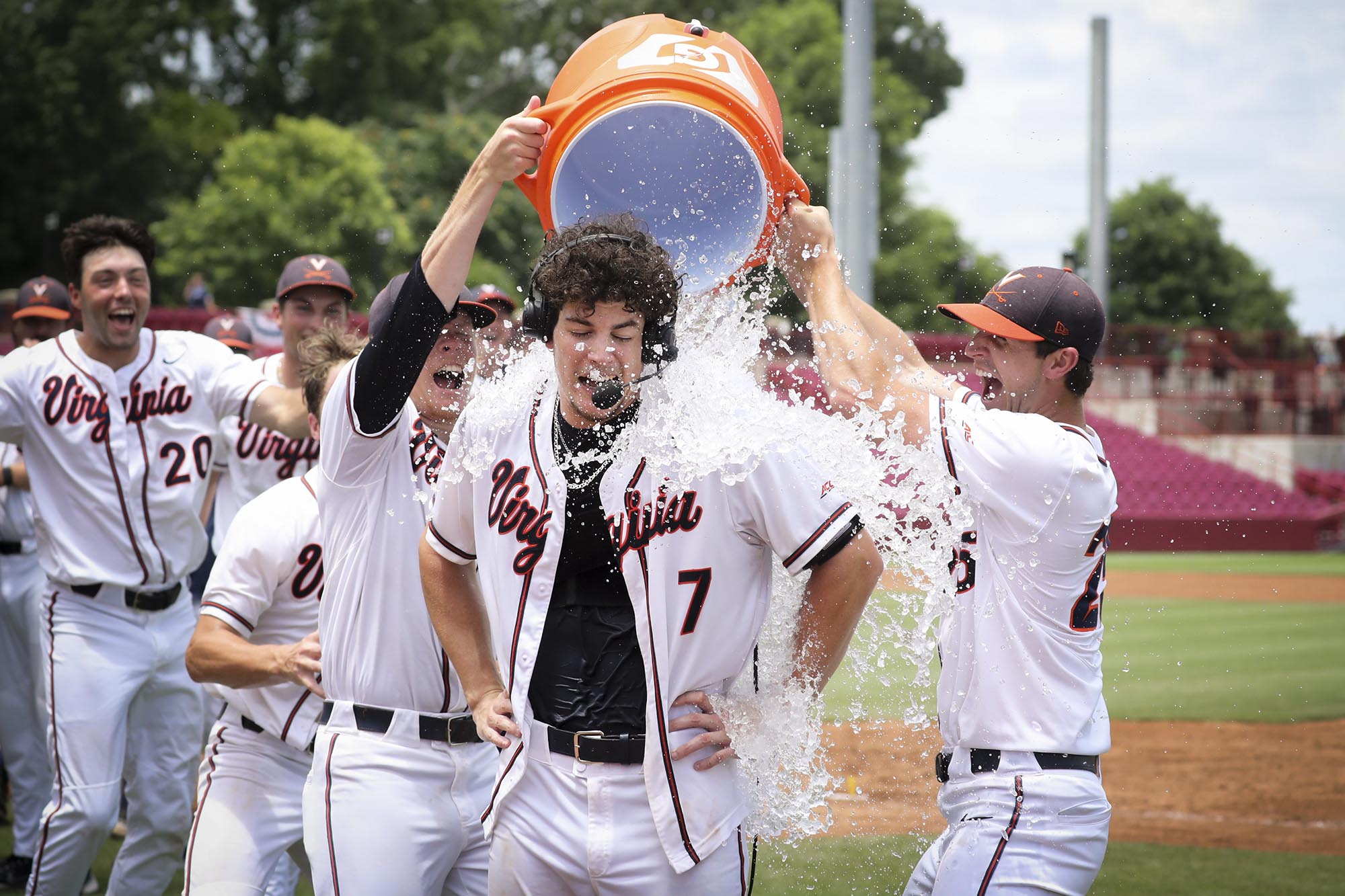 As soon as Devin Ortiz hit the baseball, he turned to his University of Virginia teammates in the dugout, pumped his fists and screamed. There was no need to watch the ball’s path. It was long gone.

By the time the ball cleared the left-field fence, ricocheting off the back wall of the Old Dominion University bullpen for a home run, Cavalier fans who had been glued to their television since early Tuesday morning were in full celebration mode.

With one swing of the bat, Ortiz – who had pitched four shutout innings to start the game, after having pitched a grand total of two innings in the previous two seasons – moved UVA into a best-of-three NCAA Super Regional against Dallas Baptist University that gets underway Saturday, back in Columbia. The winner of that round will advance to the College World Series in Omaha, Nebraska, where UVA won the 2015 national championship.

“Holy [cow]!” said Ortiz, in an on-field interview with ESPN2 broadcasters afterward. “It’s something you dream about when you’re a little kid. I’m just so happy right now, happy that I was able to help my team advance.”

On Friday, UVA dropped the opening game of the double-elimination regional to the host University of South Carolina. But for the first time in program history, the Cavaliers battled back through the losers’ bracket in the four-team regional, winning four straight games. If they had lost any one of those games, their season would have been over.

The stunning reversal of fortune mirrored the Cavaliers’ season. After dropping 12 of their first 16 Atlantic Coast Conference games, they won 14 of their last 20 to earn an invitation to the NCAA Tournament.

One of the keys to the comeback was the performance of sixth-year senior relief pitcher Stephen Schoch. With a scraggly hairstyle and fun-loving persona born out of his appreciation for Kenny Powers, the main character on the HBO comedy series “Eastbound & Down” – his Twitter handle, “@bigdonkey47,” is an ode to Powers – Schoch became a media darling.

On Tuesday, Schoch pitched 3 1/3 innings of relief, much longer than his typical outings. He helped keep UVA within striking distance in the seventh inning when he picked off an ODU runner who was attempting to steal third base for the third out.

Take a look at how the rest of the game – which, due to the threat of rain, started Tuesday at 9 a.m. – unfolded on social media:

About 15 minutes from first pitch in Columbia. Virginia and Old Dominion are playing for a spot in the Columbia Super Regional. #Columbia pic.twitter.com/YEFCcRXmm7

This is far more sports stress than I really wanted at work on a Tuesday morning.

I’ll speak for the whole UVA athletics we like to make games interesting! Give you a heart attack to bring you back to life !

This is such a special team — wahoowa and on to Super Regionals, @uvabaseball! pic.twitter.com/SASKfB2Oee

Class of 2020: Memories and Moments From a Long-Anticipated Celebration END_OF_DOCUMENT_TOKEN_TO_BE_REPLACED