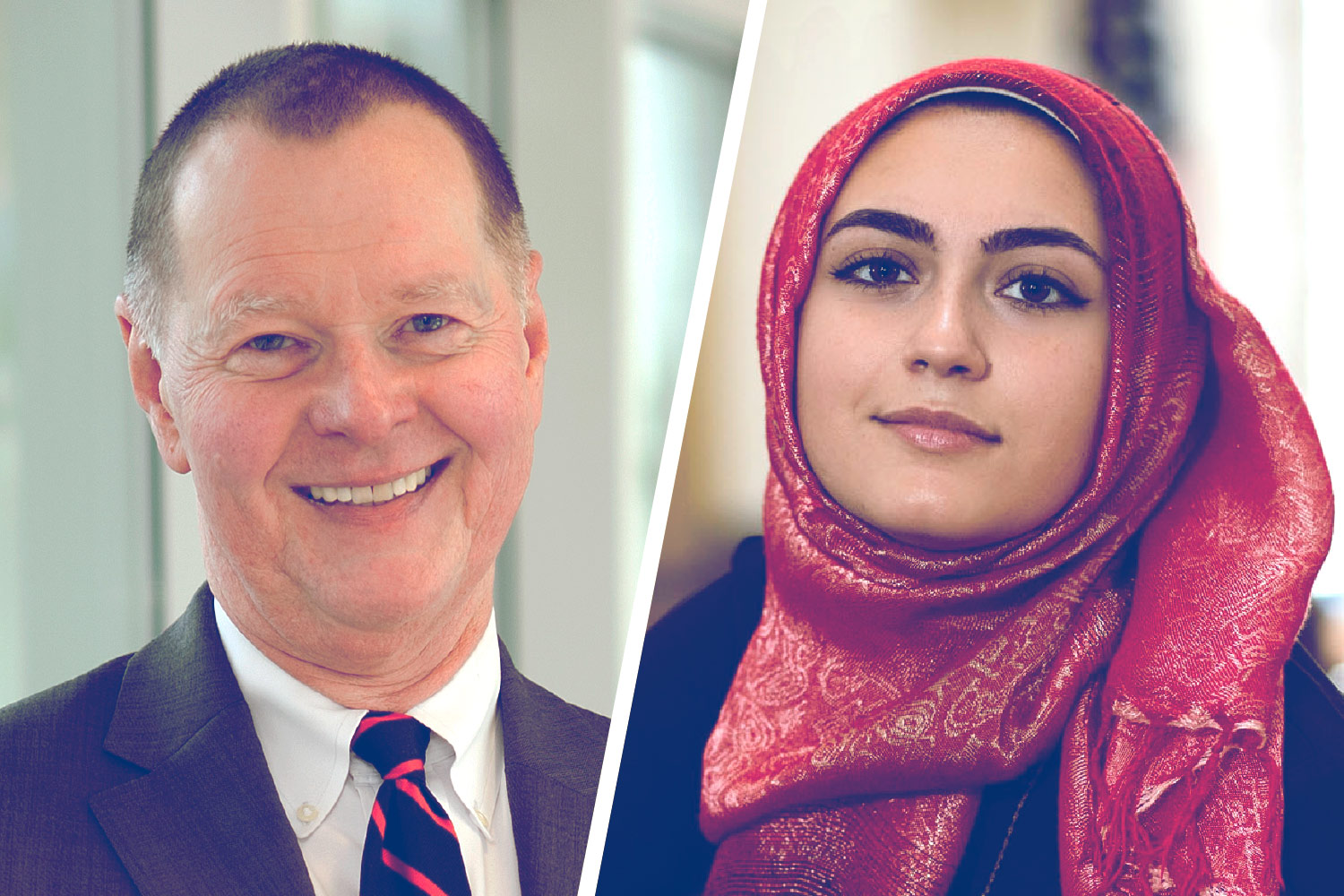 One honoree is a third-year Jefferson Scholar whose parents emigrated from Pakistan. The other is a longtime Medical School administrator who hails from West Virginia.

As different as University of Virginia third-year student Attiya Latif and Dr. Randolph Canterbury may seem, they share qualities that led to both being selected as this year’s recipients of the 2017 John T. Casteen III Diversity-Equity-Inclusion Leadership Award.

Both put their heart and soul into fostering the award’s ideals and creating real change. They’ve shown courage and perseverance in their efforts to champion understanding of the unconscious biases that undermine diversity. They’ve determined what kinds of actions will strengthen or broaden inclusion, and established groups and processes for improving diversity at UVA.

The University’s Office for Diversity and Equity, which established the award in 2010, will hold a luncheon Friday to honor the winners.

“We had a very strong pool of extraordinary candidates nominated for the award,” said Dr. Marcus Martin, UVA’s vice president and chief officer for diversity and equity. “The two award-winners have demonstrated leadership and a deep commitment to diversity, equity and inclusion at the University of Virginia in substantive ways.”

Attiya Latif: Speaking Out for Others with an ‘Inner Force and Light’

When someone scrawled “terrorist” next to Attiya Latif’s door last fall, she did not give up her many efforts to advocate for a range of multicultural issues. She continued organizing the “Eliminate the Hate” campaign she and other students had begun earlier in the semester and spearheaded other events, such as an October teach-in to educate faculty on the experiences of minority student populations. She helped organize rallies supporting Muslim, immigrant and international student rights soon after President Trump proposed his first travel ban.

Latif, a Jefferson and Echols scholar, brought the annual World Hijab Day, an event celebrated internationally, to UVA in her first year on Grounds. She has given a TEDx talk, challenging expectations and stereotypes of Muslim women in defending “A Feminist’s Choice to Wear the Hijab.” She has participated as a guest speaker at legal conferences, holding her own with seasoned lawyers. She pens a regular blog for the Huffington Post. And this is just a short list of her activities.

A political and social thought major, she grew up in Hagerstown, Maryland, and when about 12 years old, chose to wear the hijab – the traditional headscarf for Muslim women – on her own, she said. She credits her parents, Pakistani immigrants, as her “greatest source of strength,” along with her faith.

“Islam has been a guiding light and source of strength for me, because it teaches love, peace and selfless action,” she responded to an email asking where she gets her courage.

“To say that Attiya is passionate in her efforts toward diversity and human rights for all is akin to saying that the surface of the sun is just a tad bit warm,” wrote nominator Barbara Ruddy, director of human resources in the School of Law, who first met Latif in a “Diversity Dialogue” workshop more than a year ago.

Law professor Kim Forde-Mazrui, who received the Casteen Award in 2013 and directs UVA’s Center for the Study of Race and Law, heard Latif speak at the Law School as part of an “Unpacking Privilege” event where she was one of six student panelists. He was so impressed that he asked her to speak at the school’s Rev. Dr. Martin Luther King Jr. commemoration, “Seeking Solidarity in a Divided America,” along with Larycia Hawkins, the Abd el-Kader Visiting Faculty Fellow at UVA’s Institute for Advanced Studies in Culture.

Forde-Mazrui also invited her to speak at a law conference at George Washington University, where again he saw her amaze the professional audience with her wisdom and clarity. “There is also a special quality about her, an inner force and light, which is difficult to capture in words,” he wrote in his nomination.

“Although Attiya is only an aspiring law student at this point, she is possibly the most impressive student leader I have ever known,” he said. “What makes her leadership quality so gratifying to behold is that she devotes her leadership in service of respect, equality and fairness for all members of our University community, especially those who experience exclusionary attitudes and treatment.”

Currently chair of the Minority Rights Coalition, the advocacy committee that furthers the goals of nine constituent organizations under one unified voice, Latif’s peers echoed her other nominators in supporting her nomination. Next year, she will work as the student director of the Multicultural Student Center and will live on the Lawn.

Dr. Randolph Canterbury: Changing the Face and Culture of Medicine at UVA

Now senior associate dean for education in the School of Medicine, Canterbury first came to UVA in 1980 to serve his residency in internal medicine and psychiatry. Over the years, he has held several leadership roles, chairing the psychiatry department, and, in 2014, serving for a year as interim dean of the Medical School.

But it was his role in overhauling the admissions process that has changed the face and culture of medicine at UVA.

After becoming associate dean of admissions  in 2003, he saw that the percentage of medical students from underrepresented groups was unacceptably low. He restructured the admissions committee, bringing together a more diverse team and broadening the criteria for considering applications to include more students from different backgrounds, eventually expanding the idea of diversity to include LGBT students, who had largely been overlooked, as well as women and students of color.

The percentage of medical students from underrepresented backgrounds increased from less than 6 percent to 26 percent over a decade, and it continues at about that level. At the same time, the overall performance of UVA medical students and their academic credentials improved dramatically.

Canterbury has been invited to give presentations about UVA’s success to other groups, including the Association of American Medical Colleges, and his work has been referenced in medical education literature, wrote alumnus Dr. Michael Moxley, now medical director at Georgetown University, who was the UVA School of Medicine’s assistant and then associate dean for diversity and medical education from 2009 to 2014.

The sustainable and quantifiable results are only part of the story, however, according to his nominators. They emphasized “the passion for and the dedication to diversity that Dr. Canterbury exemplifies each and every day.”

Together with the first assistant dean for diversity he hired, they traveled around the state and the country to speak to and recruit students, even in high schools. He established a retreat for the admissions committee on cross-cultural sensitivity, diversity and inclusion. Canterbury met individually with all the Medical School applicants invited for an interview, memorizing their names, schools and hometowns.

“These actions put them at ease, so that they could be their best and authentic selves and shine in their interviews. Written comments from School of Medicine Admissions surveys noted this, again, and again,” wrote his Diversity Consortium nominators.

In their letter, the student representatives of these associations wrote, “Our community of students is supportive and loving of each other. We feel that we have a voice, and Dr. Canterbury created an admissions process to make this a reality. So Dr. Canterbury’s vision is what has allowed us to grow and thrive in this community.”

“It has been very exciting and gratifying to have played a role in helping our school become more diverse and achieve a higher degree of excellence in medical education,” Canterbury said.

Meet the New Cavalier on Horseback: She’s Eager To ‘Carry On a Legacy’ END_OF_DOCUMENT_TOKEN_TO_BE_REPLACED

Housing Changes Are a Breath of Fresh, Cool Air – Especially for Lawnies END_OF_DOCUMENT_TOKEN_TO_BE_REPLACED

Virginia Football – For All Virginia END_OF_DOCUMENT_TOKEN_TO_BE_REPLACED