Class of 2012: Artist Hannah Barefoot Joins Craft and Nature in Her Work 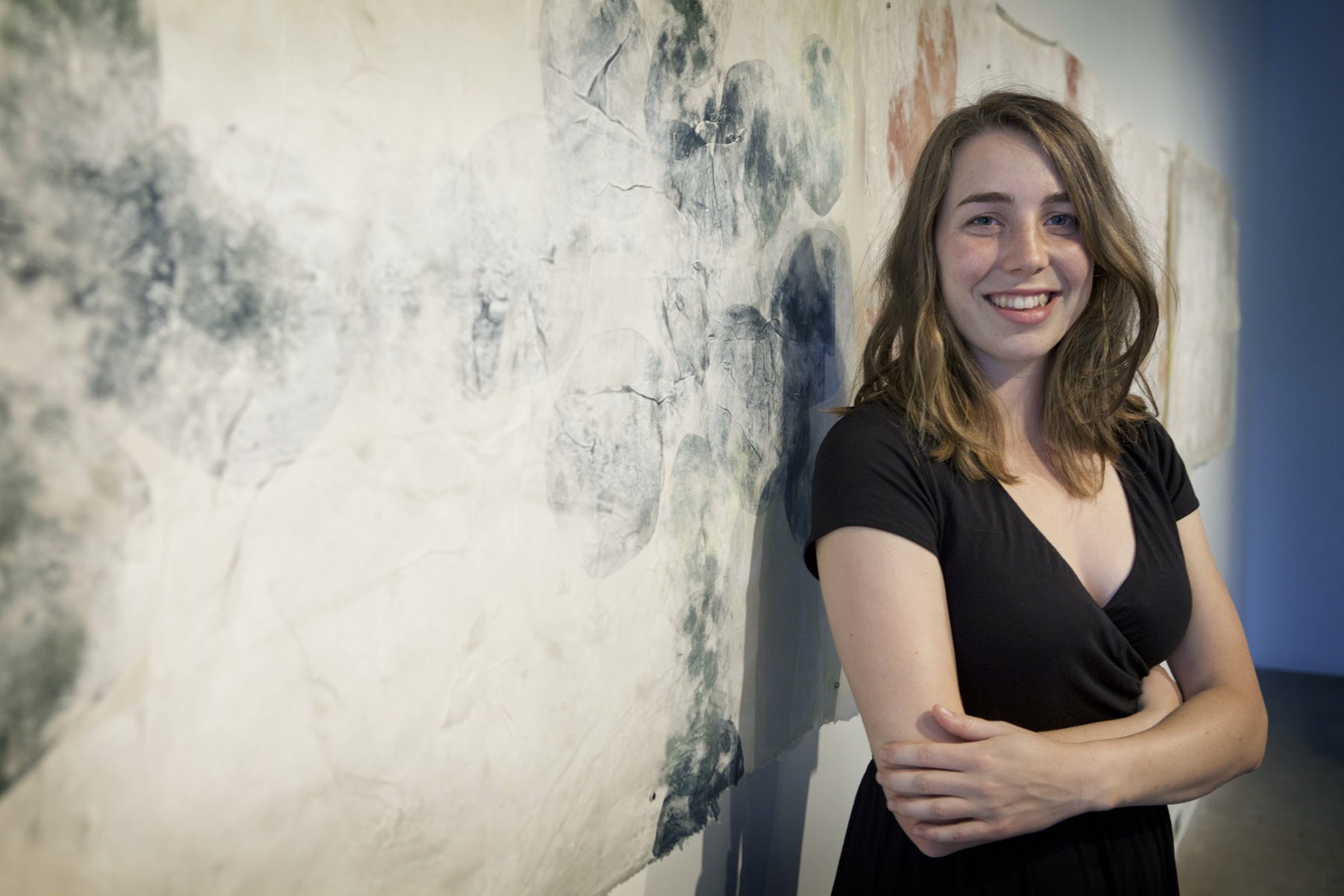 April 23, 2012 — Creating imagined environments that are based on a thirst for learning and producing the tools to make her art are a passion for Hannah Barefoot, a studio art major in the University of Virginia's College of Arts & Sciences who will graduate May 20.

For her fourth-year show in Ruffin Gallery, part of her distinguished major thesis, Barefoot created a series of abstract prints and sculptures she described as embodying "a language associated with the environment, but something not totally articulated."

She created the paper for the ephemeral screen prints hanging on the wall and to wrap the beast-like sculptures she constructed out of steel rods. She also made a bench and table for the exhibit.

She used abaca plant fiber for the print paper. For the sculptures, she pounded flax fibers until translucent and draped them on the wire sculpture frames while they were still wet so they would be taut when dry.

Her goal was to create interesting surface qualities for her work.

"I like learning about something so I can make it," Barefoot said. "The surface quality and where they come from are important to me."

A grant from the 2010-11 Undergraduate Award for Arts Projects program allowed her to research papermaking at Dieu Donne, a fine art paper studio, and at Carriage House Paper, a papermaking supply company and museum, both in New York City. The exploration continued her interest in papermaking that began in the summer of 2009, with a Kenan Fellowship connected with the University of North Carolina School of the Arts to attend the Penland School of Crafts in the Blue Ridge Mountains of North Carolina.

In both her subject matter and approach to her work, she "has a utopian idea about craft and wants to build on that," studio art printmaking professor Dean Dass said. "She doesn't do anything conventional with art. She doesn't take care to preserve the craft; she breaks it down."

Dass described her work as embodying "tension and conflict, craft and art, utopia and dystopia."

Barefoot's concern for the environment has deep roots. Camping trips with her family when she was growing up; a National Outdoors Leadership School trip between high school and U.Va.; co-creating the U.Va. Community Garden; a 2011 internship with the Patch Community Garden at The Haven, a day shelter for Charlottesville's homeless population; and taking landscape materials courses with Cole Burrell in the School of Architecture all fed her exploration of, and respect for, the environment.

A graduate of the North Carolina School of the Arts, a conservatory-style high school, Barefoot wasn't sure she wanted a liberal arts education. But armed with a prestigious Jefferson Scholarship, a merit award that pays the total cost of education for four years, she chose U.Va. and has never looked back.

She said she appreciates the opportunity a liberal arts education has afforded her to think about theories and concepts that inform her art. From 20th-century art courses with art history professor Howard Singerman, mentoring by Dass, and her courses in contemporary and modern literature in the English Department, her second major, all enlighten her work, she said.

After graduation, Barefoot will study blacksmithing at Penland School of Crafts this summer before returning to the University in the fall for an intensive year of artmaking as an Aunspaugh Fifth-Year Fellow in the McIntire Department of Art, with a dual concentration in printmaking and sculpture.

No doubt her art show next spring will reveal new explorations of the environment.

What’s Next for UVA’s Class of 2022? END_OF_DOCUMENT_TOKEN_TO_BE_REPLACED