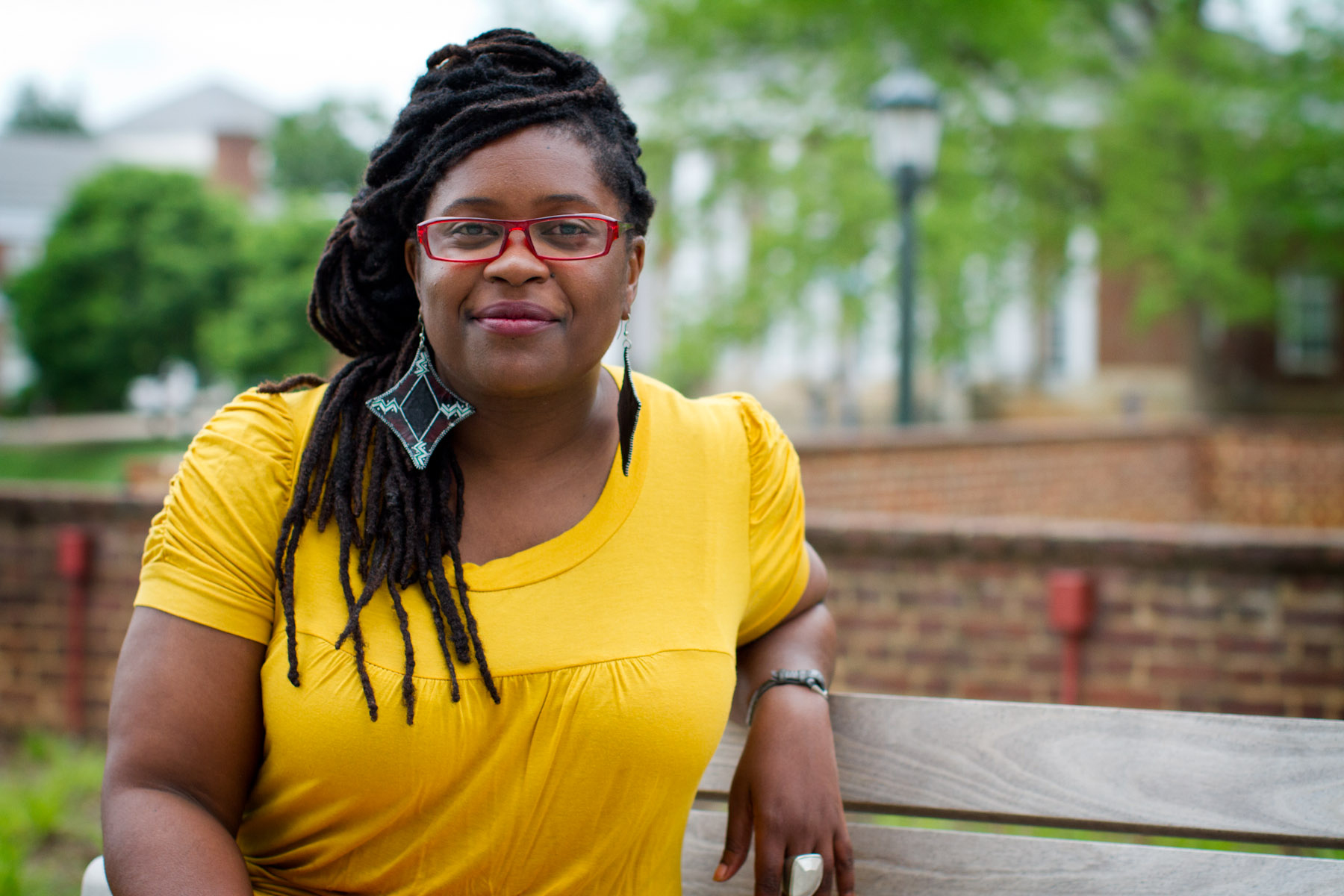 May 8, 2012 — When Z'etoile Imma taught University of Virginia undergraduates about Africa, she would ask, "When I say 'Africa,' what does that mean to you?" The responses were mostly negative, she said, but her scholarship, like her teaching, aims to help change that.

A first-generation Haitian-American, she has just finished a two-year pre-doctoral fellowship with U.Va.'s Carter G. Woodson Institute for African-American and African Studies in the College of Arts & Sciences. She will receive her Ph.D. in English on May 20.

Imma said she found her intellectual home in the Woodson Institute, with its interdisciplinary cast of faculty and fellows, a dozen emerging scholars from all over the world, she said.

Her work looks at the majority of African men and their everyday lives. Most Americans and Westerners have a narrow view of African men, she said, seeing them as violent warlords and soldiers, dominating and oppressing women and children. Her dissertation, "Intimate Men/Intimate Spaces: (Re)Locating African Masculinities and the Postcolony in Contemporary Feminist Fiction and Film," explores the complexity of men's relationships in their families and communities through the work of African feminist writers and documentary filmmakers.

English professor Deborah McDowell, director of the Woodson Institute, said, "Her work is part of a trend on broad concerns with international study, globalism, history and culture of the African Diaspora, the latter of which are front and center of the hiring agendas of all the reputable institutions."

Imma's dissertation director, Marlon B. Ross, a professor of English and a member of the Woodson faculty, called Imma's work "exciting and groundbreaking in its approach."

"Whereas previous scholars have emphasized the role of patriarchal masculinity in 'tribal' societies, anti-colonial struggle, nation-building and civil war, Z'etoile shows how contemporary African feminism sheds light on the complexity and diversity of African men's histories and experiences," Ross said.

Postcolonialism and nation-building might be the backdrop for much of African life, but focusing on family and friendship yields "a much more nuanced and compelling perspective on gender identities," he said.

"How do men participate in forms of relating that aren't based on power and domination?" That's one of the questions Imma asked in analyzing the work of African feminists, such as Delia Jarrett-Macauley, whose parents are from Sierra Leone, and South African Beverly Palesi Ditsie. Imma described their work as "feminist visions of the possibilities of masculinity."

Jarrett-Macauley's first novel, "Moses, Citizen and Me," follows a woman back to war-torn Sierra Leone to see her Uncle Moses after a 20-year separation. While there, she meets Citizen, a boy who had been a child-soldier. She learns about how he finds reconciliation in his relationship with Moses, who invites the boy to his theater camp. The book won the George Orwell Prize for political writing in 2006.

"Yes, there is war and inhumanity in many places, but there is so much more," Imma said. "Their stories become a healing ground ... and instructive for us as students of the world." Instead of just thinking about how to save Africa, she examines what Africans have to teach Westerners.

Most Americans, for example, probably don't know that the South African Bill of Rights, written after apartheid, includes anti-discrimination against sexual orientation.

Ditsie, a gay rights activist and television and film writer, produced a 2002 documentary, "Simon and I," about Simon Nkoli, another South African gay rights and anti-apartheid activist who died of AIDS in 1998. The two participated in the first gay pride march in their country in 1990. The film covers their friendship and successful efforts to get recognition for sexual orientation written into the new bill of rights.

That idea became clear to her as a graduate student teaching academic writing classes, seminar-style courses for first-year undergraduates with a variety of themes. The topics and discussions with her students ended up informing her research, she said.

The Woodson Pre-Doctoral Fellowship relieves the recipients of classroom responsibilities in order to concentrate on their dissertations. Nevertheless, Imma said she has kept in contact with many of her students. She also intends to keep in touch with her colleagues who also had Woodson Fellowships and with whom she shared intellectual and personal support.

During her time at U.Va., another event that had a profound impact was the January 2010 earthquake in Haiti. Imma and a group of graduate students formed the Magnitude Collective, organizing a teach-in at the beginning of the spring semester. "It was a public venue to talk about the earthquake and collectively mourn what happened," she said.

The Magnitude Collective then helped form the Haiti Working Group, which included faculty and undergraduates. Throwing herself into a semester's worth of events and lectures was a coping mechanism for her as she grieved the loss of relatives in the disaster, she said.

"It made me feel connected and helped me appreciate the strength of my community," she said.

New communities await Imma after graduation, when she heads to University of Notre Dame for a post-doctoral fellowship and, afterward, to a tenure-track appointment at the University of Dayton in Ohio.

Netflix to Add Ads. Why This Could Be a ‘Game-Changer’ for Your Viewing Experience END_OF_DOCUMENT_TOKEN_TO_BE_REPLACED

What’s Next for UVA’s Class of 2022? END_OF_DOCUMENT_TOKEN_TO_BE_REPLACED