Class of 2013: In a New Tradition, U.Va. Honors Grads Who Earn Degrees in Three Years or Less 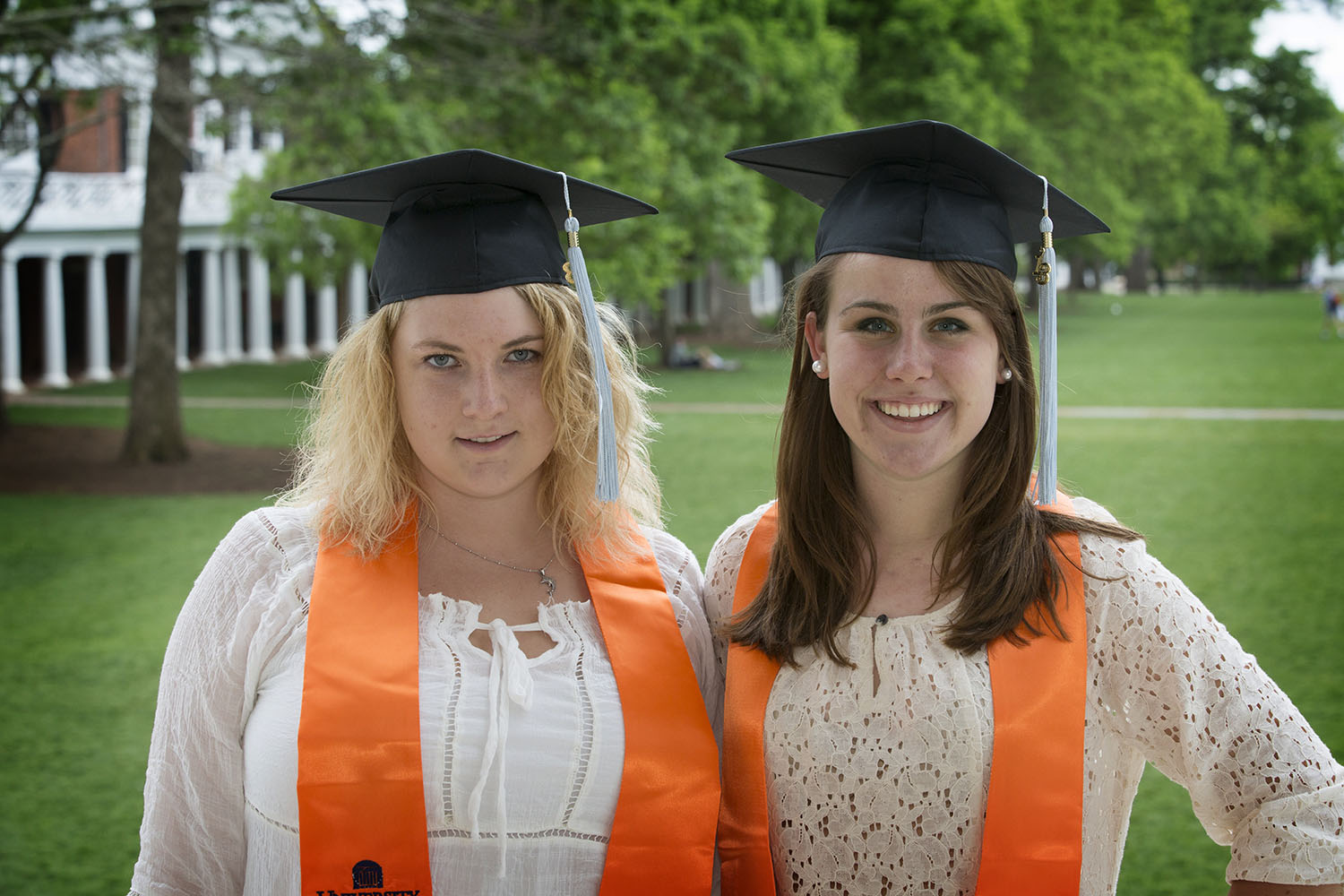 For the first time, the University of Virginia’s fast-track bachelor’s degree-earners – 82 in the Class of 2013 – will be honored at graduation for their “remarkable accomplishment.” You’ll know them by the orange academic stoles they’ll be donning at U.Va.’s 184th commencement May 19, a gift to them from the Office of the President.

“Each year, dozens of U.Va. students complete their requirements in less than four years,” U.Va. President Teresa A. Sullivan said. “This is a remarkable accomplishment and a testament to the energy and intellectual vigor of these students.”

“We salute them, and look forward to applauding their future accomplishments as alumni,” Sullivan said.

In recent years, an increasing number of students have used Advanced Placement credits, along with those earned in summer session and January Term classes, to accelerate their undergraduate studies and graduate in three years. Some at that point enter the workforce, while others opt to pursue additional degrees, reducing the time it would normally take to graduate with both degrees by a year or more.

Emily Riedel is among those who will receive an orange stole. The Northern Virginia resident, who will earn her degree from the Curry School of Education in speech pathology and audiology, said in an email, at first it “seemed crazy” to give up a year of her undergraduate experience.

“I needed my four years of the ‘best time of your life.’ Then I thought, why does it have to be four years? Our experiences should be measured by the quality and not the quantity.

“Even with one less year in my undergraduate career, I’ve been able to dance in front of thousands of people in Scott Stadium and John Paul Jones Arena. I was able to roam the cobblestone streets of Belgium and ride bikes in the Netherlands. I presented research with a group of nine extremely competent women to win first place at the Speech and Hearing Association of Virginia. I really had the chance to think in religion classes and reflect on ideologies made from 21 years of living under the roof of a minister. I had the chance to appreciate all the stuff my guidance-counselor mother puts up with in my education classes. I had the chance to observe and learn from a diverse set of individuals. These experiences helped me learn about myself.

“I am happy for my experience here at Mr. Jefferson’s University. I’ve made some of the best relationships that I trust will stand another big storm or race.

“… When it comes down to the real reason for graduating early, it’s pretty simple. It’s required to go to 2½ years of graduate school to become a certified speech-language pathologist” more affordably.

Garrett Hynson, of Doylestown, Pennsylvania, who’ll earn his economics degree from the College, agreed. “Personally, I feel that if you have enough AP credits, and are not either double-majoring or in a two-year program such as the Comm School, it is a no-brainer to finish your degree in three years. This is especially true if you are an out-of-state student, such as myself. Finishing early will save me approximately $50,000.”

Another fast-track option for students is one that Sullivan proposed early in her tenure, the “3+1” program. It allows students to complete bachelor’s and master’s degrees in four years. In the fall of 2011, the University offered more guidance and options for students who wanted to follow that path.

Students choosing the 3+1 option can now earn a bachelor’s in their desired major in three years or less, and a one-year master’s in commerce, Middle Eastern and South Asian studies, public policy, statistics and teacher education. In addition, the Graduate School of Arts & Sciences is exploring professional master’s degree programs in chemistry, environmental sciences, French and religious studies (conflict resolution), according to the Provost’s Office.

In 2013, 14 students will graduate with a bachelor’s and master’s degree within four years.

The accelerated bachelor’s and 3+1 programs respond to one of the objectives of Gov. Robert F. McDonnell’s 2011 Higher Education Opportunity Act, which calls for 100,000 more degrees to be awarded over the next 15 years.

Here Is What You Need to Know About the New Coronavirus Variant, Omicron END_OF_DOCUMENT_TOKEN_TO_BE_REPLACED

Fall Is in the Air on Grounds END_OF_DOCUMENT_TOKEN_TO_BE_REPLACED

Meet the Cats and Dogs Your CVC Donation Supports END_OF_DOCUMENT_TOKEN_TO_BE_REPLACED