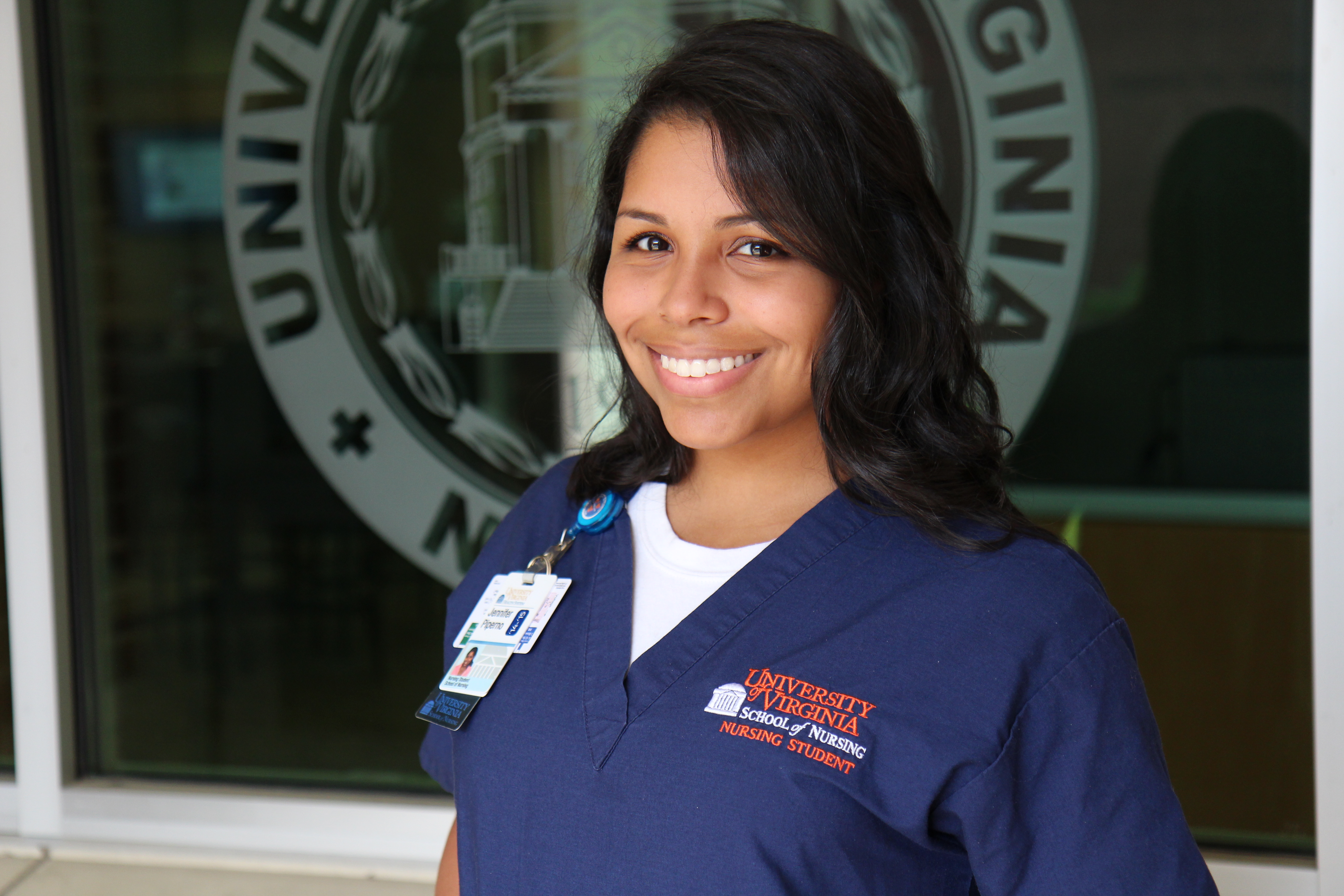 A semester off and a trip to her native Panama gave Jenny Piperno a fresh outlook on a nursing career.

A native Ghanaian determined to improve the health and wellness of citizens in his home country. A stay-at-home mom and former dog trainer who returned to U.Va. after turning down admission in 1981. And a Panamanian adoptee whose semester off enabled her to find herself when she returned to her native country as a student nurse volunteer.

Across continents, generations and borders, these nurses found a home at the University of Virginia’s School of Nursing as members of the class of 2015.

Returning to See Panama ‘Through a Nursing Lens’ Proves Inspiring

Jenny Piperno is used to occupying the space between.

From a tender age, she spoke fluent Spanish and English. A native Panamanian, she was adopted by a single mother who hailed from a large, spirited Italian family. And when she arrived at U.Va., Piperno sensed a dissonance that led her to take a semester off her second year to consider her course, present and future.

“I was never that little kid who always wanted to be a nurse,” recalled Piperno, who grew up in Northern Virginia and will earn a bachelor’s degree in nursing before beginning work as an R.N. in the Neonatal Intensive Care Unit at the U.Va. Medical Center. “Because my mother was an archaeologist, the conversations I was surrounded by when I was little were the Latin names for plants and birds. And while I loved medicine, I realized that while it gave me my science fix, it didn’t get me my people fix. Nursing’s a great way to get both.”

During Piperno’s semester away, she traveled back to Panama with her mother, a Smithsonian archaeologist and an expert on tropical plants, later meeting up with an interdisciplinary contingent of U.Va. students traveling with the nonprofit Global Brigades, a group that rallies student volunteers to empower under-resourced communities to resolve health and economic disparities. It was a monthlong trip that changed everything.

“It was the first time I’d been able to seen Panama through a nursing lens,” Piperno said. “I felt so connected to the people there. The people in my U.Va. group – I was the only nursing student – and being in Panama made me feel like I belonged.”

Leaving U.Va. that semester, Piperno said, was “one of the best decisions” she’d ever made.

So was coming back. And Piperno says her circuitous, round-the-world life has everything to do with the quality and flavor of her nursing care because – as someone who comes from in-between in so many worlds – she can “always find a way to connect with someone.”

“My whole life I’ve been in between,” Piperno said, “but I realized during nursing school that I had to embrace it, that it’s OK if I didn’t quite fit into a box. And that’s true of most of my classmates, who are more like family than friends. A lot of us have gone through hard things – the death of parents, illness of siblings, or in themselves – and somehow, we’ve chosen to come here together. We’re all very different, but whole-hearted.”

For Sylvanus Mensah, it was the second time that proved the charm.

At 13, Mensah traveled with his mother from their native Ghana to Northern Virginia, where she took a job as a nurses’ assistant at a hospital. Mensah and his younger brother used to wait for her on the unit after school, watching quietly from the sidelines as she tended patients and wrapped up her shift.

“In the health care profession,” Mensah said, “you sometimes can’t just clock out, because your patients still need you.”

Such visits left an indelible impression on the youngster, who, after high school, attended Northern Virginia Community College’s general studies program, where he quickly rose to the top of his class. After applying to U.Va. Nursing in both 2012 and 2013 – two of the most competitive years in Nursing School history – he arrived on Grounds and, after a few bumps, settled in.

“For me, it’s been a great experience here,” he said. “You have this idea, coming to U.Va., that it’ll be competitive because everybody’s so smart. But if you need help, if you want to see a professor, you just send them an email. When I had difficulties, my classmates helped. I’ve had way more access to my professors here than I did in community college.”

Clinical training at U.Va. has also helped Mensah – who’s also worked as a nurses’ assistant at U.Va. Medical Center throughout school – focus on the specialty he loves: gerontology. After graduation, he’s accepted a job at Georgetown Medical Center, where he’ll care for older patients after surgery and in recovery.

In gerontology, “I’m not just taking care of a patient in a bed,” he said. “I’m a nurse serving the family.”

Fast-forward a few years and you’ll likely find Mensah in a master’s program and en route to becoming a nurse practitioner, after which he plans to return to Ghana and his extended family there to help with that nation’s health care shortfalls.

“We don’t have many resources available in Ghana,” Mensah said, “and I want to go back as an N.P. and make an impact.”

Back in 1981, even admission to U.Va. wasn’t enough to lure young Teri Harris away from love, marriage and children. So she tucked her attraction to nursing away, even if the idea never quite faded.

“Nursing’s always been there in my head,” said Harris, of Richmond. “For me, it’s this perfect balance of right-brain and left-brain thinking. You have to be able to be analytical and say, ‘Why doesn’t my patient look like they did an hour ago? Let’s assess.’ Then at the same time, there’s an element of nursing that’s thinking outside the box, the creative part. ‘What’s going to resonate with my patient? Where did they come from?’ For me, nursing is a wonderful balance. Nothing else I’ve ever done fits so well.”

In the 1980s, Harris raised a son and a daughter alongside a gaggle of Golden Retrievers and Cavalier King Charles Spaniels, and before long found herself at the helm of her own dog training school, Golden Rule Dog Training, based out of her Earlysville home. Over time, the positive reinforcement program flourished, and Harris estimates that she and her five trainers instructed about 3,500 people and dogs. She even dabbled in service dog training and worked with inmates at the Fluvanna County Correctional Center for Women while occasionally taking nursing courses here and there.

But after selling the business and seeing her children off to college, Harris hit hard times. Her marriage of 23 years crumbled, and even with sharp business acumen and people skills, she couldn’t find a decent-paying job without at least a college degree. After a spate in the restaurant business – she operated the Midlothian-based Special “T” Café from 2010 to 2012 – nearly everything changed after a feverish burst of life-changing activity in mid-2012.

On a whim, she reapplied to the U.Va. School of Nursing – and got in. The following summer, she also got remarried, sold her restaurant, packed up a few things before moving into her father and stepmother’s Charlottesville home, and began the first of four years of nursing school. She was 48.

“It means a lot more to me now than it would’ve back in 1981,” she said. “I am in midlife, and there, many of us want to be useful, to be of service. I also felt a calling from God to serve with the gifts He’s given me. I’ve raised my children … and getting to be of service as a nurse with a bachelor’s degree from U.Va. is kind of a miracle to me.”

Now, at 51, she’ll graduate at the top of her nursing class, much like her daughter, Larkin Muncaster, a family nurse practitioner who earned degrees in 2009 (bachelor’s) and 2012 (master’s), did before her. And she found a family among her classmates, even if they were mostly 30 years her junior.

“I believe that nursing students at U.Va. are the most dedicated, devoted, passionate undergraduates in the entire place,” Harris said. “They don’t have Fridays off, they don’t sleep in, they have clinicals at 6 a.m. and do so much. It gives me great hope for the future.”

After graduation, Harris will work as a nurse resident at Richmond-based Chippenham & Johnston-Willis Hospital. She’ll also live full-time under the same roof as her husband for the first time in their three-year marriage, beginning the latest stage in an already interesting and varied life.

“I don’t think anyone else gets to do what nurses get to do,” Harris said. “Med school residents and doctors, they kind of come and go, but nurses are right there at the bedside where all of the tough stuff happens. I’ve found so many opportunities to be there, and to listen. And be of service.