Class of 2015: Top Cadet Penatzer Is Prepared for Multiple Careers 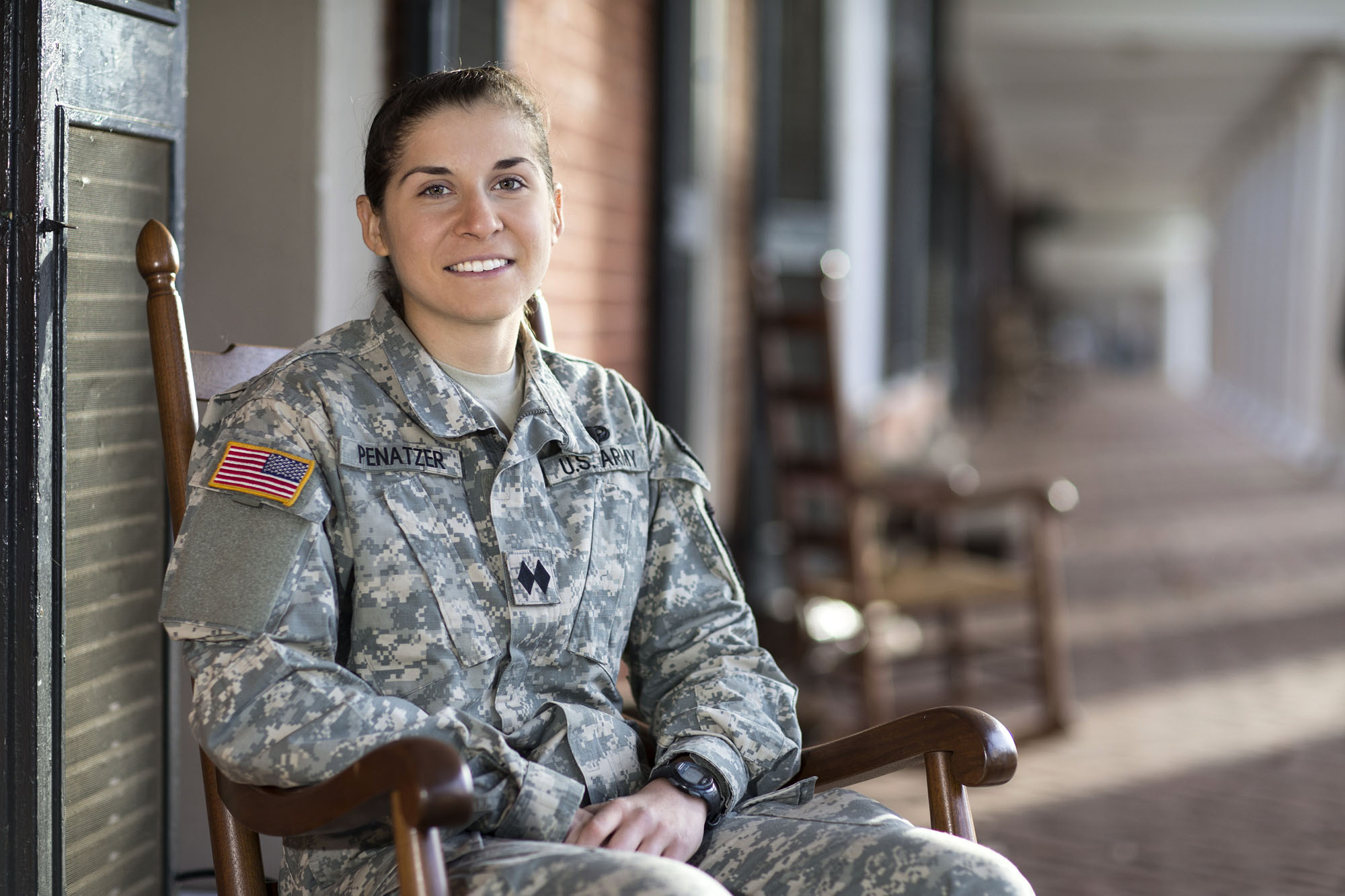 Adria Penatzer entered the University of Virginia an accomplished high school student and leaves as a highly decorated second lieutenant in the U.S. Army.

The Pittsburgh native will graduate May 16 with a degree in the politics department’s honors program and East Asian studies and step into a military career, first traveling to Fort Huachuca, Arizona, for additional training, and then to her first posting at Fort Bragg, North Carolina.

“It has been a developmental process,” she said. “You come in not really knowing what to expect and nervous about how hard the classes are going to be because you hear a lot about the academic rigor at U.Va.”

Penatzer already knew about academic rigor, having been the salutatorian of her high school class and president of its chapter of the National Honors Society. But U.Va. helped hone her critical-thinking skills.

“It is not just the academic content you learn, but it’s about learning how to manage your time and the stresses of academic life and all your extra curricular activities as well,” she said.

While excelling in her studies, she took on the challenges of the ROTC program, participating in the ROTC Ranger Challenge Team four years running, and as a member of the cadet-led Mosby’s Raiders, a student-led ROTC group in which cadet leaders create a training plan and then meet weekly to practice ROTC skills like small-unit tactics and land navigation. She graduated from the U.S. Army’s Airborne School at Fort Benning, Georgia in the summer of 2012.  She was also named the top cadet in the Leader Development and Assessment Course at Fort Knox, Kentucky, in 2014, ranking her as the most outstanding cadet in the 500-member 4th Regiment. This April, she was also a recipient of the Pallas Athene Award, which recognizes the top two female cadets in the nation.

ROTC has been a large part of her collegiate life and many of her memories will be of the events that built camaraderie with her fellow cadets.

“I’m thinking of field training exercises where you are walking around with a rucksack in the rain or sleeping in the mud,” she said. “We’ve had some really bad luck with weather on our field training exercises, but you really can’t replace the bond you forge with your class that will commission together and become Army officers.”

But the cadet corps is not her only community. She is also a Lawn resident, an honor accorded only to top fourth-year students.

“It’s an honor to live here, because of the historic nature of it,” she said. “We live in such a great community with so many high-achieving students who all live in the same area. To be able to talk and collaborate on a daily basis is just great.”

Penatzer will depart with a slew of ROTC awards. She received the Superior Cadet Decoration Award, the Platinum Physical Fitness Award, the Professor of Military Science Athletic Award, the Professor of Military Science Academic Award, and the ROTC Honors Award. She was the 2013 recipient of the Capt. Humayun S. Khan Scholar-Soldier-Statesman Award, given in the memory of a U.Va. graduate and ROTC cadet who was killed in action while protecting his fellow soldiers in Iraq in 2004. She also received the 2012 Military Order of the Purple Heart for exemplary leadership and the 2014 American Legion Gold Scholastic Excellence Award. This spring, she received the Thomas Jefferson Rainey II Memorial Award, awarded to the fourth-year Army cadet whose conduct exemplifies the spirit, ideals and traditions of the University. She is a Distinguished Military Student and a Distinguished Military Graduate who is on the College of Arts & Sciences’ Dean’s List and a member of the Phi Beta Kappa academic honor society.

“Adria Penatzer is my best cadet out of the class,” said Army Lt. Col. Mark C. Houston, commander of the Cavalier Battalion and a professor of military science. “She is the epitome of a scholar, athlete and leader.”

She did not spend all of her time at U.Va. in military pursuits. She has been president of the Alexander Hamilton Society, which debates basic principles and contemporary issues in foreign, economic and national security policy; rifle captain of the Virginia Rifle and Pistol Club; vice president of the Women’s Ice Hockey Club; a Madison House volunteer and a member of the Raven Society. She is also part of the Catholic Student Ministry, for which she was a spring break mission leader, assisting with low-income housing construction and maintenance in South Carolina, Georgia and West Virginia.

While initially considering a business major, Penatzer found a taste for politics, which she coupled with an appreciation of East Asian studies.

“I took an international relations course and I fell in love with politics and foreign affairs,” Penatzer said. “The Army also really values cadets and officers who understand other cultures. When you are deployed to those regions, you are required to have kind of an understanding of where you are being deployed. Having a broader cultural understanding will help me.”

“When I joined ROTC, there was a lot of talk about the ‘shift to the Pacific,’” she said. “Considering our country’s increasing engagement with Asian nations, I wanted to study a language that would be valuable to the Army, but that also could prove useful in a non-military job.”

She traveled to China in 2012 for an intensive eight-week language course and to Benin in West Africa in 2013 to teach English to cadets in the Beninese National Officers’ Academy.

While she plans a career in the military, Penatzer said the Army has also prepared her for a private sector career.

“One of the great benefits of going into the Army is that you will be a leader in ways that most of your peers will not be,” she said. “You will be in charge of more equipment and more people than a vast majority of graduates. This will prepare me for any civilian career in management.

“I’ve learned a lot about myself as a leader, particularly how I need to improve to be the best officer I can be. I think one of the biggest leadership lessons I’ve learned is how important it is to have empathy, and to be able to put yourself in someone else’s shoes before you make a decision affecting someone else.”