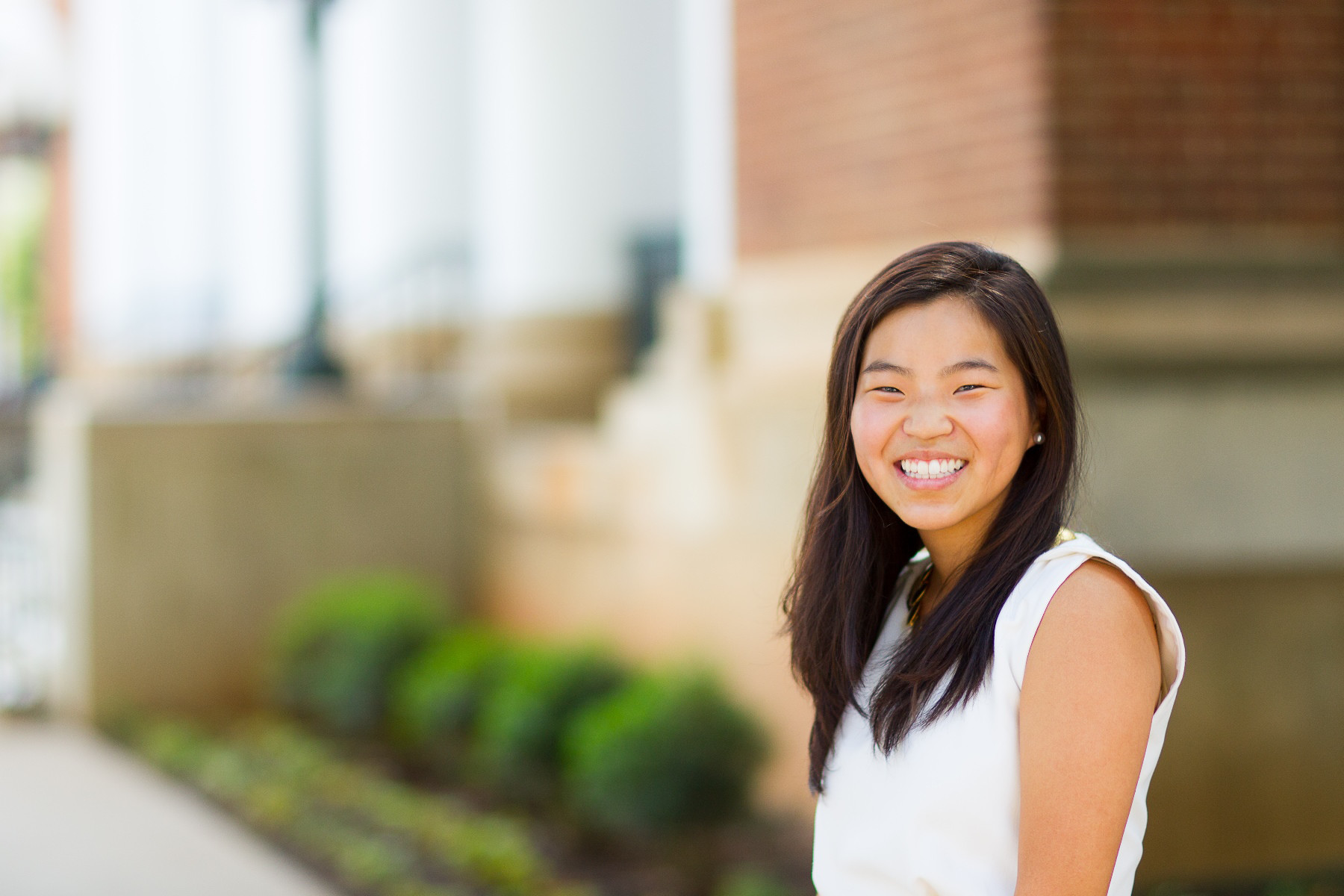 As University of Virginia graduate student Michelle Cho prepares to take her Master of Public Policy degree from the Frank Batten School of Leadership and Public Policy on Sunday, she can look back with pride on the footprint she’s left on the Charlottesville community.

Cho will become a “double ’Hoo” this weekend – she received her bachelor’s degree from the College of Arts & Sciences last year – and she’s spent her five years on Grounds learning the most effective ways to bolster equality through policy and action.

While earning her undergraduate degree in media studies and in Women, Gender and Sexuality, Cho spent time improving minority rights as a White House intern and as a volunteer for the Charlottesville Office of Human Rights. At Batten, she expanded student assistance to local non-profits as the executive director of the school’s student-run, pro bono policy and strategy consulting group, FCG Consulting.

The school recently recognized her outstanding efforts with the Pilot Award, a recognition granted annually to graduating master’s students who have led the school with their extraordinary dedication to public service.

Balancing her extracurricular activities with a busy academic schedule hasn’t been easy, but for Cho it’s always been a labor of love. Before she walks the Lawn, she met with UVA Today to talk about how her years on Grounds have shaped her view of the world and her plans for the future.

Q. What drew you to the Batten School?

A. I became interested in the Batten School after completing an internship at the U.S. Agency for International Development the summer of my second year. After working with development experts over the summer crunching data, drafting memos and polishing reports, I realized this was the kind of work I enjoyed and thrived in. I knew that a policy program would be essential in continuing the path forward for a career in government, so when I heard about Batten’s accelerated Master of Public Policy program, it made the most sense in terms of both time and money.

Q. How has attending UVA helped expand your worldview?

A. At Batten, we have a saying that goes, “Policy is everywhere, lead from anywhere.” Policy truly plays an integral role in resolving every one of our toughest challenges in the future. Batten has exposed me to the world of leadership and policy, pushing me to rethink the way I approach problem-solving and reaching socially optimal deals on matters that could impact entire populations of people. This graduate program has absolutely changed my worldview and made me realize how interconnected and political both public and private actors are in our society.

Q. What was the nature of your work as a White House intern?

A. As an intern at the White House Initiative on Asian Americans and Pacific Islanders, I got to see just how important community advocacy is at both the local and federal level. I worked on the initiative’s communications team, where I got to administer the official verified social media channels and manage the public inbox. Interacting with citizens through Facebook, Instagram, Twitter and the initiative’s inbox was a fascinating experience and demonstrated the power that these platforms have to give voice to policy concerns from the public.

At the initiative, I also worked on a project with 24 departments and agencies to more strongly incorporate Asian-American/Pacific Islander issues in every line of work the government does. This was an incredibly collaborative push to increase minority voices at the national policy level, and it was very powerful to see what can come to fruition when people come together to focus on improving the livelihoods of often-marginalized populations.

Q. How do you think that experience influenced you?

A. My time at the White House has engrained some lessons I don’t think I’ll ever forget. I have never worked with a more motivated and driven group of people in my life. That internship pushed me to think about how different minority groups experience and interpret the American Dream, and trained me to be a more empathetic and perspective-taking advocate for these groups.

I also saw how aggregated data that lumps all Asian-Americans and Pacific Islanders into one category can overlook issues that they face. There are about 50 Asian countries and thousands of Pacific islands, with a myriad of spoken languages. Data disaggregation can help identify what groups are missing out on resources. For example, before the Affordable Care Act, Asian-Americans and Pacific Islanders as a whole were one of the highest uninsured groups in the U.S., with one out of every six was without coverage. By better disaggregating data, we see that this rate was even more concentrated among certain populations such as Korean, Tongan, Pakistani and Thai Americans, where the uninsured rate is one in four.

Q. How has FCG Consulting changed since you joined?

A. FCG Consulting looks very different from when I first joined the organization in 2014. For starters, we’ve absolutely exploded in growth. This past year we saw more than a 200 percent growth in student interest and the number of consultants we brought on. We also saw similarly large gains in our clientele, and completed 14 consulting projects for 10 different non-profits in Charlottesville.

Our non-profit clients are more diverse than ever before, and this year we worked in education, housing, refugee settlement, energy and youth policy. We also voted to incorporate a board of trustees – which I will be sitting on in the inaugural term – to create a more sustainable and enduring community and Batten legacy.

Q. Did you have any mentors at UVA who helped shape your academic path and goals?

A. [Lecturer] Amanda Davis of the Women, Gender and Sexuality program revolutionized the way I interpret how power and oppression affect and create a social order. She has engrained in me the imperative to stop and consider how identities such as gender, sexuality, race, class, religion and age intersect to create different realities for people, which is important for an informed policymaker to be aware of.

[Women, Gender and Sexuality lecturer] Lisa Speidel has also been a wonderful figure in my life, and has taught me to never stop asking questions and to always keep challenging the norm. Both of these women helped me realize that policy is the path for me to make the changes I would like to see in society.

Q. What are your plans after graduation?

A. After graduation, I will be moving to Northern Virginia where I will begin work as a consultant for Deloitte in their federal practice. I’m looking forward to getting to live near my parents and grandma again, and to getting to eat Korean food on a regular basis again!

Q. What kind of legacy do you hope to leave at UVA?

A. As simple as it is, I hope to leave a legacy of service for FCG Consulting. Our clients are non-profits with very noble and important missions. In a resource- and time-constrained environment, they face tough obstacles that can hinder them from providing services the people in our city and community need to live fulfilling lives. At the end of the day, I hope that FCG continues to attract consultants who are not interested in working with FCG merely for the professional development, but because they see themselves as active stakeholders to improving the lives of the citizens of Charlottesville.