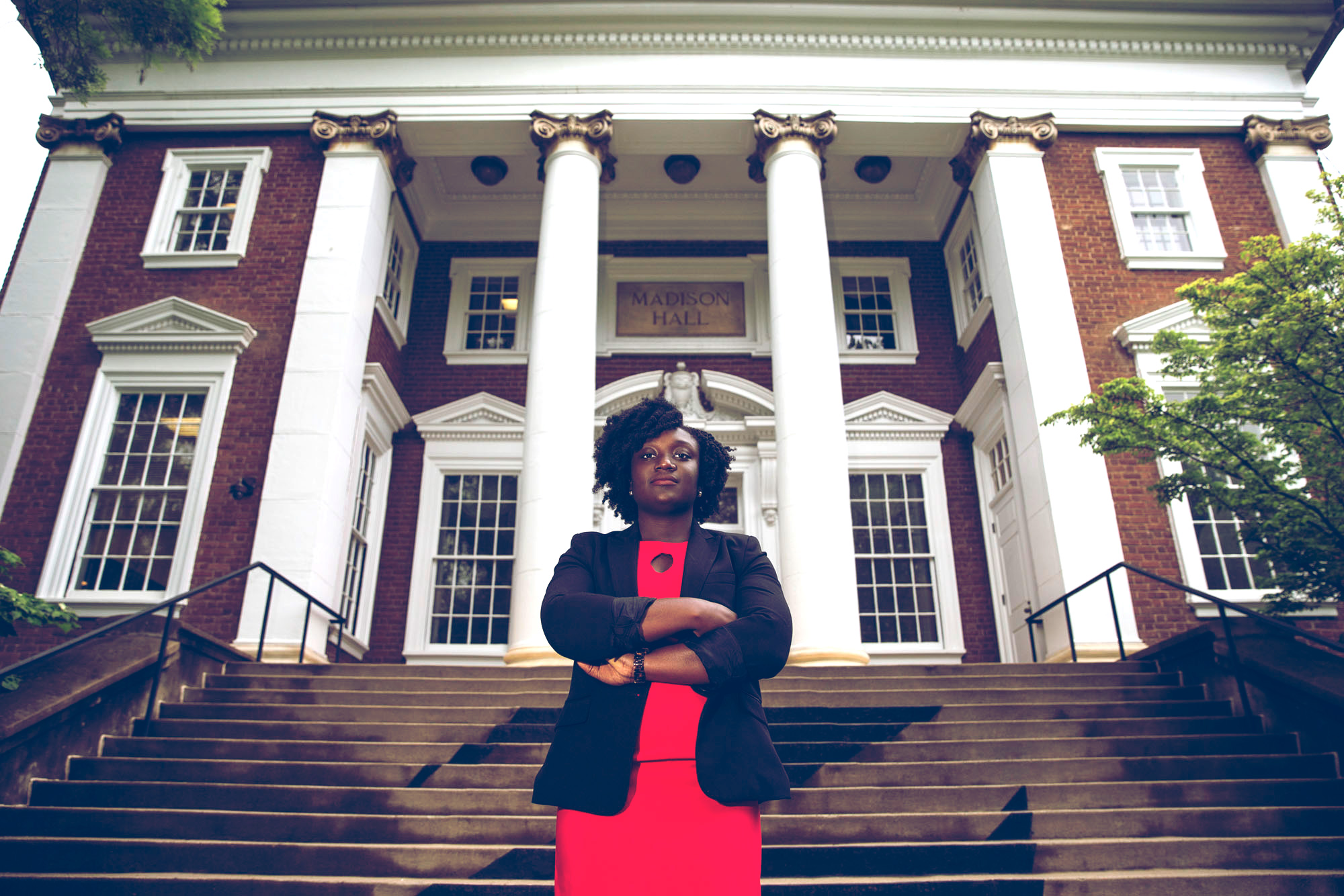 Fourth-year University of Virginia student Ursula Gbe would like to remind her classmates of the tremendous effort that goes into making Final Exercises the best day possible for their families and for them.

She knows this firsthand. As one of three interns in the office of UVA President Teresa A. Sullivan this year, one of her assignments was in the Office of Major Events, which plans graduation weekend.

Gbe – pronounced “bee” – grew up straddling cultures and continents, spending roughly half her life in the U.S. and half in Ivory Coast, a former French colony where she learned to speak French fluently. At UVA, she brought her experiences and interests together, double-majoring in foreign affairs and sociology, adding a minor in French, and getting involved in several organizations, including her Class of 2016 Trustees.

As a sociology major, she received an email about the president’s internships, because Sullivan – also the George M. Kaufman Presidential Professor of Sociology – recruits interns from her department. Fellow sociology majors Kaycee Ensign and Evgeny Malts also served as her interns this year.

Sullivan initiated the internship for sociology students in her office soon after arriving at the University in 2010. “My goal is to provide these students with real-world experience in higher education, while also exposing them to the diverse career paths and professional positions represented in my office,” Sullivan said. “At the same time, these students make valuable contributions by sharing the student perspective on various issues that we face in administration.”

After living from age 4 to 12 in Abidjan, the economic capital of the Ivory Coast, where her relatives and parents are from, Gbe returned to the U.S. In high school, she became aware of America’s troubled race relations – a new experience for many Africans, she said.

“Since America’s concept of race is deeply rooted in its history, I think it is difficult for foreign-born blacks to understand and experience race the same way U.S.-born blacks do (at least for the first few years they are here),” she wrote in an email. “Their racial perspectives are often different because they grew up [and] are coming from a different environment and racial structure. For instance, calling myself black in Ivory Coast would have very little meaning since the majority of the people there are black; I would be more specific and identify myself with my mother’s ethnicity because it would speak more to who I am. I say Ivorian because that’s where I grew up, that’s where my family is from, that’s where my family lives.

“It’s not just that I want to be more specific than African, it’s that I don’t necessarily identify with an entire continent. There are a number of countries in Africa that I’ve never set foot in and have very little to do with how I see myself.”

She wishes that more Americans would learn more about the vast continent and where places and people are in Africa, she said. “I’m constantly explaining where my country is.”

One effort she’s been involved with to help mitigate the lack of knowledge is “Africa Day,” an annual cultural showcase planned by the Organization of African Students, which she joined her first year.

The group became like a family to her, said Gbe, who served as its president this year. They helped and relied on each other when needed, she said. The free event, which includes singing, dancing, poetry and fashion, plus cuisine from West and East Africa, required a lot of preparation.

Being a member and secretary of the Black Student Alliance as well, Gbe said she has learned the nuts and bolts of student self-governance that is such a hallmark of UVA. Her activities, along with courses probing topics such as sociology professor Sabrina Pendergrass’ “Race and Ethics,” have taught her to reevaluate and affirm her beliefs and opinions, she said.

“These organizations have permitted me to not only explore my passion for social justice, but also to gain a deeper understanding of race relations at UVA and in the United States, all while honing my leadership skills,” she wrote in her internship biographical note.

Gbe said she’ll miss knowing how things work in her daily life at UVA. “Now that I know everything, I’m leaving. I’ll miss that confidence,” she said.

Although she’ll take the time to determine her next move, she still holds the dream of returning to Ivory Coast, which has continued to be unstable since a civil war began in 1999 and supposedly ended in 2003.

“I am strongly committed to women’s empowerment and reducing the gendered educational gap present in many African countries. I hope to one day move back to Ivory Coast and build a school for girls in my mother’s village,” she said.