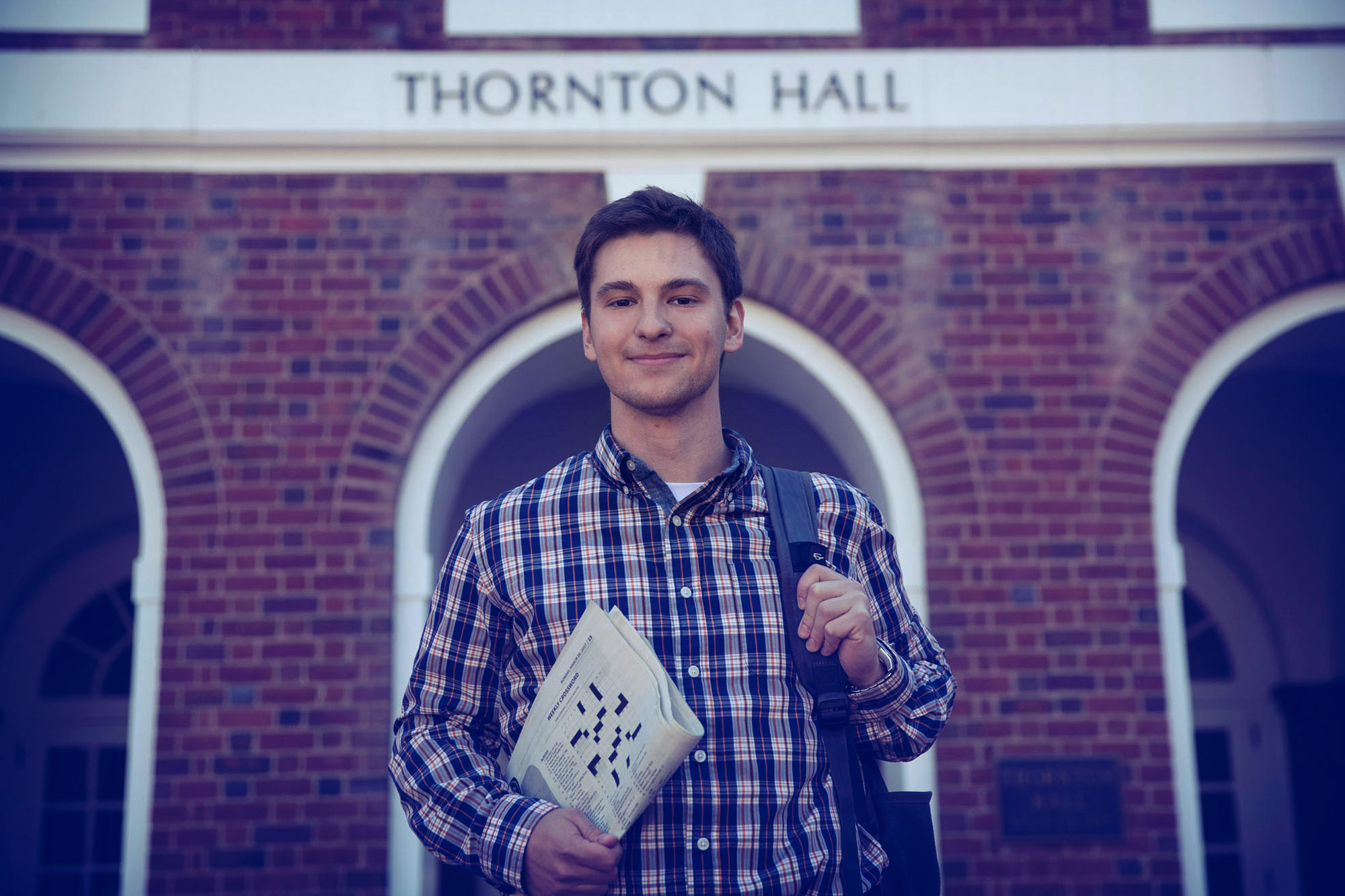 Sam Ezersky will earn a mechanical engineering degree from the University of Virginia on May 21, but he is already working in construction – building crossword puzzles for the New York Times.

After graduation, Ezersky, will be working at the newspaper full-time, reviewing and editing puzzle submissions, performing his dream job with fellow UVA grad Will Shortz, a 1977 School of Law alumnus.

Ezersky, who sold his first crossword puzzle to the Los Angeles Times at age 16, interned for Shortz and assistant puzzle editor Joel Fagliano during his most recent winter break and stayed in touch with them. He received a job offer in April.

“As cheesy and nerdy as this sounds, this is my dream job,” he said. “Work will always be work, but this is what I primarily do to fill the void when I am not working. I am lamenting never being able to solve a New York Times crossword puzzle ever again.”

Ezersky was on Facebook Live with UVA Today on Wednesday presenting one of the puzzles he recently created. See below.

Word puzzles have fascinated Ezersky since he was about 6 years old, discovering a Fill-It-In puzzle in a magazine in a Baltimore barbershop while waiting for his brother to get his hair cut.

“I found it very fascinating, and I was too young to finish it correctly, but I pointed it out to my mom and in the weeks that followed, she bought me this book of Fill-It-In puzzles, and I started moving through them,” he said. “I was always interested in how they were made, these interlocking words; it was a puzzle to me. I started drawing up little grids, shading in squares, filling in random strings of letters, such as JXQZ as some abbreviation to get my grid to work.”

He stayed with his Fill-It-Ins for a while, but then he found his stepfather working on the Washington Post crossword puzzle and, at first, he was put off because he needed to know things, especially trivia, to complete crosswords. But his stepfather encouraged him and he completed his first Post puzzle as a young teenager.

And then he found the Holy Grail.

He was in a bookstore with his father, browsing the crossword books, and his father handed him a copy of “Will Shortz’s Favorite Crossword Puzzles.”

“They were eye-popping, not just from a solving perspective, but from my constructing perspective,” Ezersky said. “I looked at these stacks of longer answers and I thought, ‘Holy crap.’”

These puzzles stimulated not only his desires as a solver, but also his eye for construction, as he analyzed the square arrangement and the number of open spaces, and started breaking down how this was done. This led him further down the rabbit hole as he started chasing crossword puzzle websites.

“I took it upon myself to search online to see if there is a community,” he said. “Where are all these other people behind these puzzles? Fourteen-year-old me discovered these sites and I joined a mailing list. I was a lurker at first, but I started getting ideas.”

With these ideas came courage, and Ezersky, still in high school, began sending puzzles to Shortz.

“At the time I thought they were good,” Ezersky said, noting that hindsight gives him a better perspective. “But Will was very nice in rejecting them and at one point he said, after I had my fifth puzzle rejected, ‘Keep trying. Your work shows imagination and skill.’ And that really meant a lot to me.”

Ezersky did indeed keep at it. He sold a Sunday-sized crossword to the Los Angeles Times when he was 16. He posted the date of the puzzle on his Facebook page and started talking with his friends at school about what had been, until then, his private passion.

The L.A. Times accomplishment was not the high point. He kept working at puzzle craft, learning online from mentor Victor Fleming, a Little Rock, Arkansas, judge, and the two of them collaborated on a puzzle they sold to the New York Times. It ran on July 28, 2012, shortly after Ezersky turned 17.

“It was a Saturday, the hardest day of the week,” he said, noting the Times’ convention of increasing puzzles’ difficulty from Monday through Saturday.

It was also the type of puzzle he likes best as a solver. “My favorite puzzles to make are the themeless ones with those crazy stacks of longer answers that have really diabolical clues. Those are my favorite to solve as well.”

His love of puzzling moved him toward engineering.

“I’ve always been a ‘numbers’ guy, as well as fascinated by the way the world works,” he said. “For mechanical things in particular. I really like such a hands-on, problem-solving approach, and having dabbled in Legos and bridge design as a young kid, it seemed a perfect fit.”

He uses many of the same skills building a puzzle as he would wrestling with an engineering problem.

“It is looking to solve a problem, with the materials and the constraints you have, approaching it from what can we do, how can we think outside the box to create something,” he said.

Gregory Lewin, a lecturer in systems engineering, said he is very impressed with the path Ezersky is taking.

“Sam is a super-humble guy who is willing to accept responsibility and contribute to the team,” Lewin said. “I think you need to be able to think logically to build a crossword puzzle.”

During his last two years at UVA, Ezersky has been contributing a weekly crossword puzzle to the Cavalier Daily, the independent student newspaper. His method is to develop an idea, such as the puzzle where he attempted puns from the names of the different bars on the Corner, and build from there.

“I pare down the theme idea, and I will come up with a list of symmetrical answers, such as BOYLAN EGG and ON THE VIRG, that I can place in a grid, and I will arrange those answers in a grid,” he said. “It becomes second nature. The more you create grids, you know where to place your theme answers. After I arrange those theme answers, then I start to arrange the black squares on the grid, so I can still have decent, mid-range, longer fills.”

Lewin, who teaches in the Technology Leaders Program, was pleased that Ezersky worked “TLP” into his last Cavalier Daily crossword.

Ezersky prefers puzzles that are fun for the solver.

“My ultimate goal, for the Cavalier Daily or the New York Times, is that I want the solver to be able to solve my puzzle without groaning,” he said.

Ezersky likes challenging puzzles, with blocks of long answers, and he tries to avoid the unavoidable, the crossword glue words such as “alb” and “alar.”

“Whenever there is a three-letter answer and the clue is ‘Brian of classic rock music’ you know it’s going to be Brian Eno,” Ezersky laughed, calling it a Shortz classic. “It has such a friendly letter pattern as far as constructing is concerned. He is a very legitimate person, even if he shows up in crosswords more than real life. That is something to which I jump, even if I am thinking of Brian May from Queen, it’s always going to be Brian-freaking-Eno.”

Ezersky uses a computer program to assist in constructing his grids, but he says that in building crosswords, as in many elements of life, the human touch remains important.

“I am a firm believer that you can create a machine to do it in the quickest way possible, perhaps with less error than a human, but I feel the human will always be able to have the insight and the abilities to make it better,” Ezersky said. “With engineering, and with my puzzles, there needs to be some human supervision over the technology that you use, and you need to continue to hone your skills so you can understand the work you are doing to the best of your abilities.”

Ezersky said his family has been very supportive of his pursuit of crosswording, and while his mother initially wondered if it was a career, she noted that he was influencing others.

“My mother came to visit me one weekend at UVA and my housemates were all around solving the Sunday crossword on the big television together,” Ezersky said, adding that it was not staged for her benefit. “My mom said, ‘Sam, you’ve been presented with an opportunity nobody else has. You’ve been so passionate about this, go for it.’”

Ezersky still enjoys solving puzzles. He competed at last year’s American Crossword Puzzle Tournament, a speed-solving tournament where he finished as the No. 1 junior contestant, placing 28th overall among more than 500 competitors.

“I solve puzzles daily, religiously,” he said. “I time myself. My record for solving a Monday New York Times puzzle, the easiest day of the week, is 1 minute and 54 seconds.”

How a Single Email Changed a Life END_OF_DOCUMENT_TOKEN_TO_BE_REPLACED

Fall Is in the Air on Grounds END_OF_DOCUMENT_TOKEN_TO_BE_REPLACED

At UVA, There Is a Club for Everyone END_OF_DOCUMENT_TOKEN_TO_BE_REPLACED