Class of 2017: Daughter of Undocumented Immigrants Made UVA a Better Place 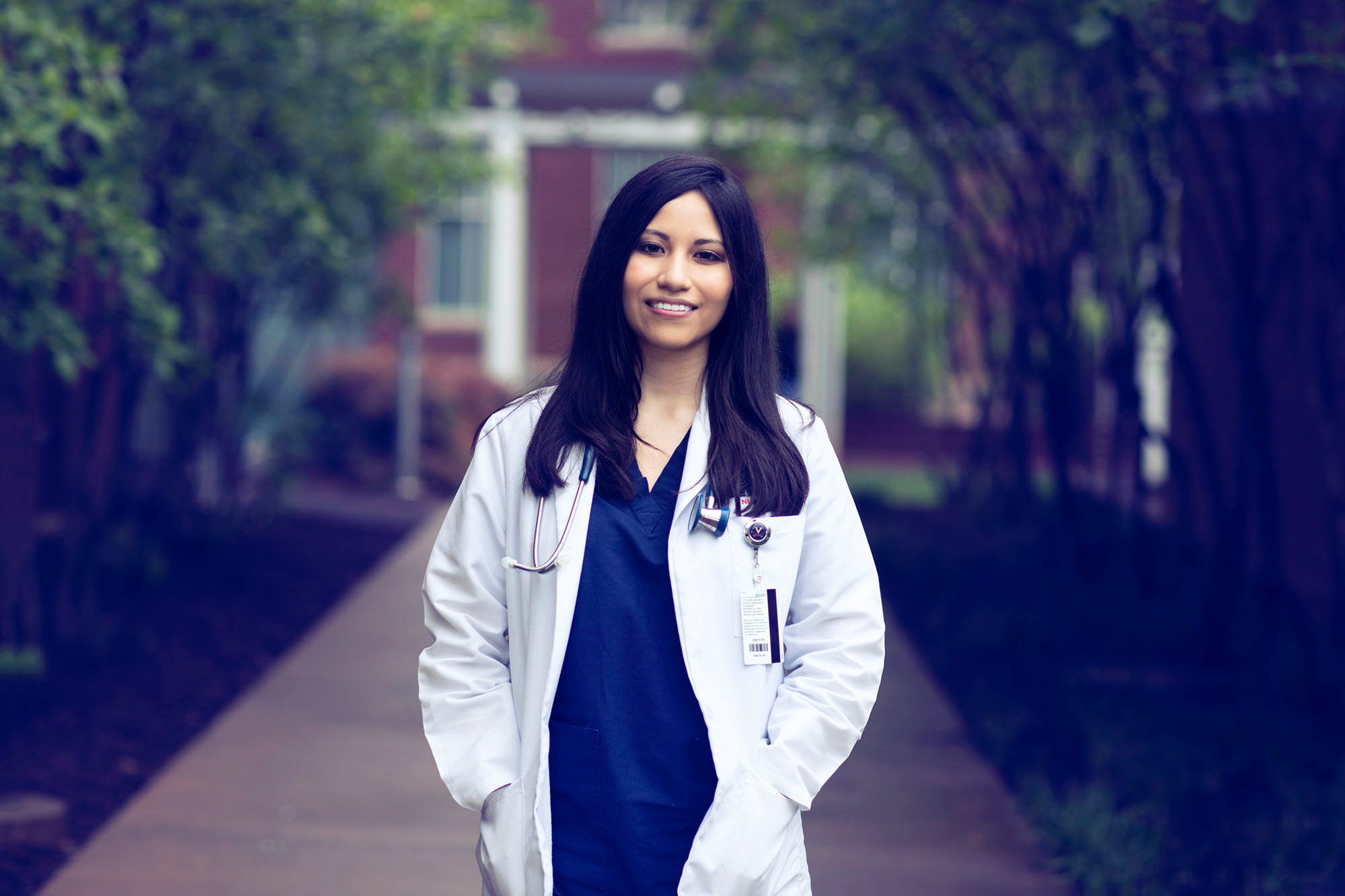 Knowing what it’s like to be an outsider has always informed Erika Fernandez’s navigation.

As the daughter of undocumented immigrants from Bolivia. As an out-of-stater, even in a place where she’d spent nearly her entire life.

But nestling within the close orbit of her family – and having a nose-to-the-grindstone mentality, like her parents – has always kept her on course, she said, leading the now-24-year-old to success beyond even her own lofty ambitions.

In May, she will graduate from the University of Virginia School of Nursing and head for a job at the prestigious Mayo Clinic in Rochester, Minnesota.

She comes by her fierce determination honestly. She emigrated with her parents from Bolivia in 1993 as a toddler; her father worked nights as a dishwasher, while her mother cleaned houses. After a year in Maryland, the trio settled down in Arlington, not far from a growing phalanx of family, including dozens of Fernandez’s cousins, who grew up together like siblings.

But life, while happy, wasn’t easy. The family grew progressively tighter when a favorite uncle was diagnosed with Lou Gehrig’s disease in his early 50s, requiring constant care. It was, recalls Fernandez, her first glimpse of what nursing was like.

“Watching all the people so patiently and compassionately take care of my uncle inspired me to take care of others, with the same compassion and equanimity I saw,” she said.

Always a top student, Fernandez first visited UVA as a high school student taking part in Juntos Podemos (“Together we can”), a program organized by the Society of Hispanic Professional Engineers. But during her senior year, after a frank discussion with her parents about the dual impossibilities that poverty and a lack of legal residency presented, she enrolled in a Northern Virginia community college for two years, paying the nearly out-of-reach out-of-state tuition while working full-time and managing her studies.

“I didn’t qualify for in-state tuition, and our immigration uncertainty was nearly paralyzing,” Fernandez recalled. “I had so many aspirations to become a nurse, and couldn’t realize them.”

It would be a long, unnerving wait. Nearly three years after Fernandez’s mother’s employer petitioned for her legal residency, Erika finally received a green card, making her eligible for in-state tuition and financial aid. At that point, in 2013, she was admitted to UVA School of Nursing as a transfer student. It was a match, she recalls, made in heaven.

“I realized when I arrived that it was where I was meant to be,” she said, “a place where students and faculty were so welcoming. I know now that I learned not only from the best, but from the kindest, too.”

While at UVA, Fernandez rarely stood still. In addition to the rigor that is nursing school, she participated in Nursing Students Without Borders’ international work and found time to reimagine the school’s diversity club to accommodate a broader, more community-focused mission. That group, Diversity in Nursing for a Better Community – DNBC for short – became a hotbed of local activity under Fernandez’s leadership, assembling care packages for military personnel stationed overseas, offering youngsters a look at nursing with “Scrub Camps” at the Boys and Girls Club, putting on art therapy sessions for seniors with dementia at a local nursing home, even volunteering at a superhero picnic clad in capes celebrating the families and children who’d graduated from UVA’s Neonatal Intensive Care Unit.

With her stellar grades and focus on service, Fernandez earned the  Gordon C. Burris Award, an endowed scholarship from the UVA Parents Committee, during her third year.

Her greatest focus became DNBC’s work to expand the pool of marrow donors in Virginia – often the last possible solution for cancer patients who’ve exhausted all other treatment avenues. After an externship at Medstar Georgetown University Hospital’s bone marrow transplant and hematology units, Fernandez became a campus ambassador for the Gift of Life Marrow Registry program, learning to dispel the myths of marrow donation and organizing dozens of bone marrow drives on Grounds. The last two semesters alone, Fernandez and her peers signed up 237 potential donors for the registry through its cheek swab campaign.

“When you learn how the risks are so minimal, and the potential to save a life is there, I can’t see why somebody wouldn’t want to donate,” she said, noting that minority cancer patients in particular face far greater odds than do whites in finding acceptable matches for bone marrow transplants.

As she readies for a new job as an oncology nurse at the Mayo Clinic, Fernandez can rest assured that what she leaves behind will prove her lasting impact.

“She’s an inspiration,” said Theresa Carroll, the Nursing School’s dean of students, “and will be the type of alumna we’ll celebrate and honor someday. She doesn’t just show up; she’s here, and fully. Erika’s the type of student who makes me love to come into work every day.”

“Every now and again, along comes a student like Erika who manages to infuse an incredible mix of intelligence, determination and compassion in perfect unity in her nursing,” Nursing Dean Dorrie Fontaine added. “She’s impacted so many of us during her time here, and we know she’s now off to do great things beyond UVA’s universe. We couldn’t be prouder.”

How a Single Email Changed a Life END_OF_DOCUMENT_TOKEN_TO_BE_REPLACED

Fall Is in the Air on Grounds END_OF_DOCUMENT_TOKEN_TO_BE_REPLACED

At UVA, There Is a Club for Everyone END_OF_DOCUMENT_TOKEN_TO_BE_REPLACED