Class of 2017: Sibling Rivalry? Not for These Graduating Law School Twins 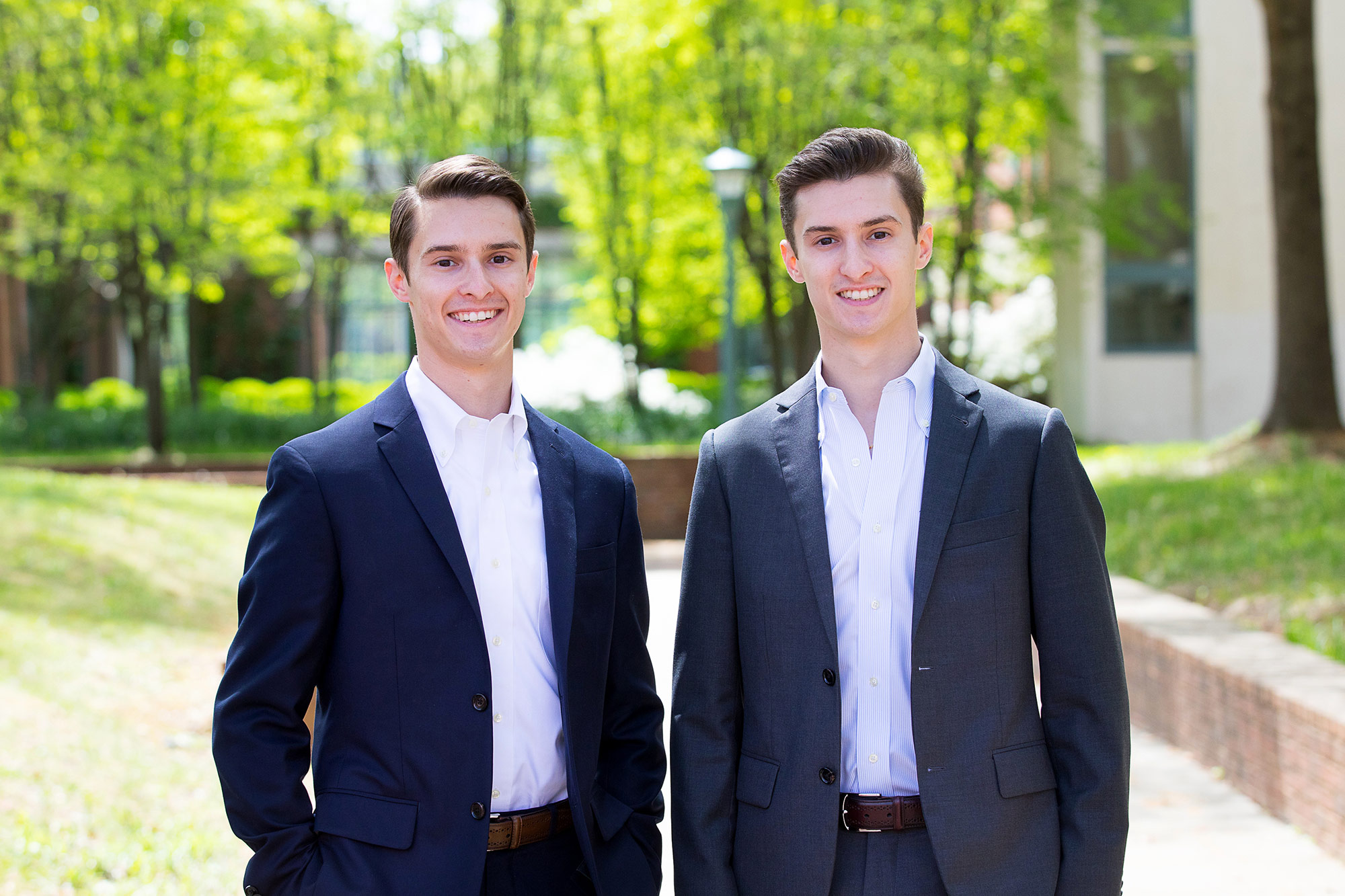 Brothers Zachary and Alexander Nemtzow are headed for the same law firm after graduation. They will both work as patent attorneys in Boston. (Photo by Jack Looney)

They came into this world as “A” and “Z,” identical twins separated in age by 13 minutes.

Those who know Zachary and Alexander Nemtzow, members of the University of Virginia School of Law’s Class of 2017, would swear it’s the longest they have ever been apart.

“He was stubborn,” older brother Zach said of Alex’s delayed arrival into the world.

Zach explained the story of their names: “Originally, since I was the first-born, I was going to be named Alexander, and then Alex would be Zach. But our grandfather said it would be more equitable to have the first-born be Zachary, and the second-born be Alexander. So we each had a chance to be first.”

For two years before law school, they worked together as patent examiners in the U.S. Patent and Trademark Office in Alexandria. Upon graduation, they’ll work together as patent attorneys at the same Boston law firm, Wilmer Cutler Pickering Hale and Dorr.

“We didn’t decide to go to law school together,” Zach said. “We actively made sure that we were making our own decisions. It’s just that UVA was such a fantastic place; it seemed like the right place for us each individually. We actually got the exact same admissions decisions everywhere.”

Alex corrected him: “There was one school, actually, that accepted me and rejected Zach, and then two weeks later called up and said, ‘There’s been a terrible mistake. You’re both supposed to be admitted.’”

The twins said a high point of their UVA experience has been involvement in the Law School’s William Minor Lile Moot Court Competition, in which teams of students argue before three-judge panels, including real state supreme court and federal judges in the event’s final stages. Zach was last year’s moot court board treasurer and this year’s problem writer for the second-year law students. Alex ran the competition for second-year law students this year.

It was coincidence, they said, that they also competed together on a team.

“Like everything else, it was unintentional,” Zach said. “We both expected no team would be forming until all the [individual performance] scores were out. But by the time the scores were out, a lot of people we would have asked had already formed teams.”

“I also asked some people, ‘Like, oh, did you think about mentioning – you know, putting my name out as a possible teammate?’” Alex said. “And they said, ‘Oh, I just assumed you’d be doing it with Zach.’”

The brothers ultimately lost in the semifinals to the team that would go on to win the entire competition. But they said the experience illustrated how they are different, and why they work so well together.

“One of the biggest differences between the two of us is that Zach is really, really detail-oriented – at least when it came to the moot court competition – and so he is really so thorough and so on-point about everything that he won’t put something down on paper unless he’s 100 percent sure it’s accurate, and he’s thought it down five levels,” Alex said. “I’m much more of a high-level ideas person. So when Zach gets too deep in the weeds, he always comes to me for an answer about how to pull it up to a higher level. And at the same time, if I’m having trouble figuring out how to phrase something or which avenue to follow for research, Zach is always the strong point there.”

The twins said another aspect of the UVA Law experience they’ve enjoyed is working on journals. Believe it or not, they were on separate ones – Zach on the Virginia Journal of Law & Technology, Alex on the Virginia Law & Business Review.

When the twins are not focused on law, they perform with other students in the unofficial Law School cover band, Jefferson Clerkship. Alex plays the drums and Zach plays guitar and saxophone.

Their nicknames among some around the Law School are “Boardwalk” and “Park Place.”

“Nope,” Zach concurred. But he noted that the Monopoly properties aren’t as prized for their individual value as much as how effective they are when paired.

“Together, that’s where you can start building those hotels,” he said.

How a Single Email Changed a Life END_OF_DOCUMENT_TOKEN_TO_BE_REPLACED

Fall Is in the Air on Grounds END_OF_DOCUMENT_TOKEN_TO_BE_REPLACED

At UVA, There Is a Club for Everyone END_OF_DOCUMENT_TOKEN_TO_BE_REPLACED