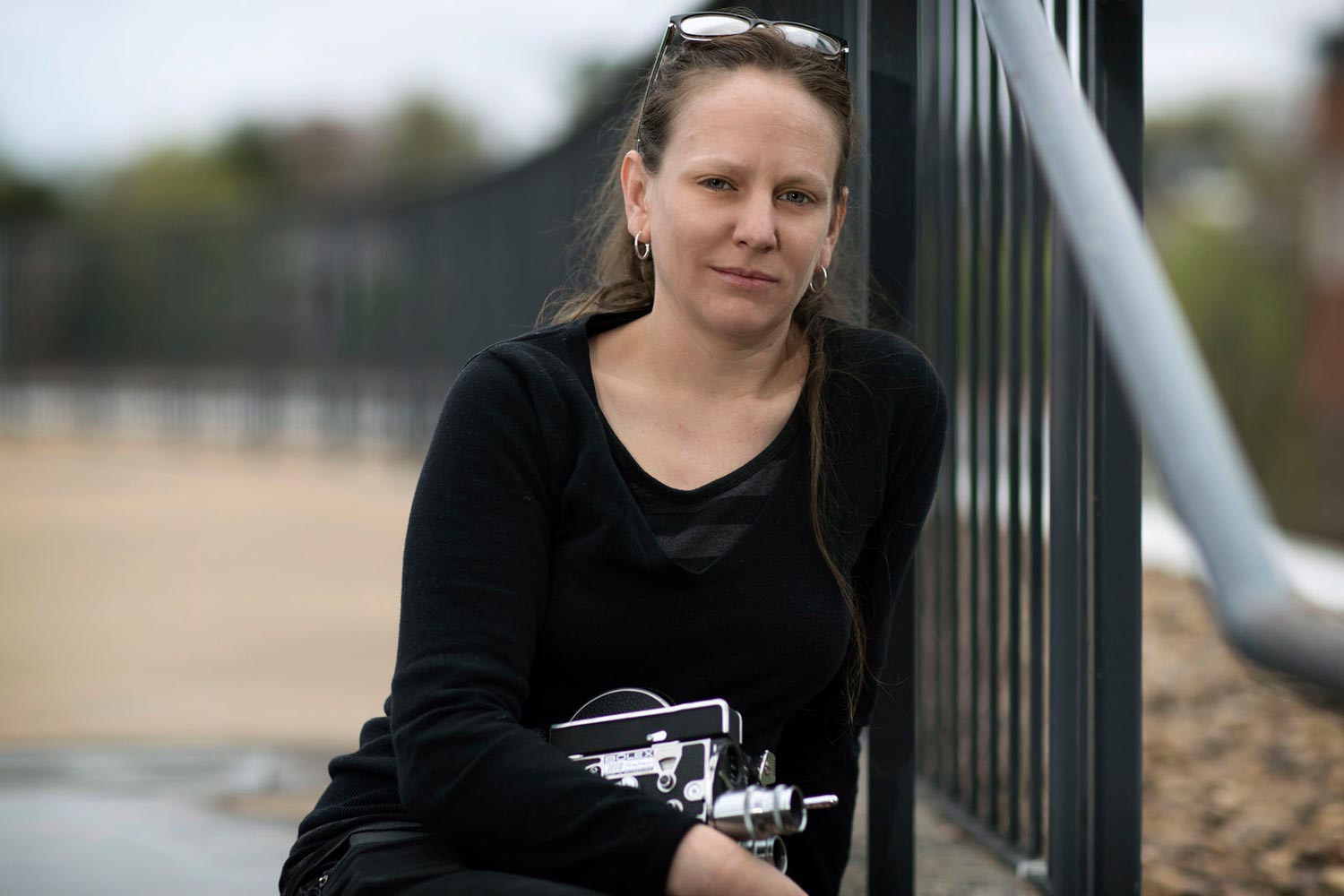 A librarian by trade, Amanda Downing returned to UVA to complete her bachelor’s degree – and rediscovered her passion for art. (Photo by Dan Addison, University Communications)

Amanda Downing is an artist, a sculptor exploring film, who soon will be able to add a Bachelor of Interdisciplinary Studies degree to her accomplishments.

Downing, 41, who is graduating from the University of Virginia’s School of Continuing and Professional Studies, previously attended two art schools, but felt she wanted a more rounded education to help her better understand, and inform, her creations from a social context.

One major takeaway: she reaffirmed her commitment to art.

Downing is a native of Milwaukee, where she first practiced her artistic talents. “That was the place I identified myself as an artist,” she said. “There is a certain grit of Milwaukee in my work. There is grit in that city. Richmond has a little bit of that grit.”

Downing took a course in Milwaukee in lost-wax casting, an artistic technique for making copies of sculptures.

“I took my first, right-out-of-high-school summer art class at the Milwaukee Institute of Art & Design,” she said. “Just out of interest of the process of lost wax casting. And I liked it. I didn’t do much more of it. But it was always on my brain, on my mind, that was what I wanted to do.”

Downing next attended the School of the Museum of Fine Arts in Boston from 1997 to 1999, before moving to Charlottesville in 2001.

“I knew some people here, so I thought I would give it a go and I never left,” she said, drinking cold black coffee from a Mason jar. “That’s kind of what Charlottesville does. It’s this strange vortex, I guess. Culture shock from Boston.”

For the past dozen years or so, Downing’s day job has been at the Jefferson-Madison Regional Library in Charlottesville, a job she enjoys because it places her in the center of the community. She works in the circulation department, issuing library cards, taking in and checking out books, shelving books, finding books and finding area resources for people.

“Being in the public library keeps me in the know of what is going on, and also I can help people,” Downing said. “I like it. It keeps me up-to-date with what is going on socially around here. I like the public – you just don’t know who is going to walk through that door.”

And working in the library is a different structure from working in a studio.

“People who don’t make art don’t always understand how an artist thinks,” she said. “Making art is a different kind of structure. It’s not completely wild and crazy. There is a structure of a different type than a 9-to-5 job.”

Downing’s structure has her constantly creating. When she is not sculpting, she is drawing, or writing, or working on film and, while she was in school, writing papers. Her final paper for the B.I.S. degree involved analyzing landscapes painted in prisons.

“It’s what people do when they are locked up,” she said. “It’s a great form of inner escape and bringing the outside world in. I think regardless if someone is incarcerated or not, and they are still painting, it’s escape painting. It’s therapeutic and it’s making art. It’s good for the soul.”

She returned to school to complete her bachelor’s degree in a way that allowed for flexibility and that went beyond her art.

“I focused on research that allowed me to expand on social subjects of interest, such as American foreign policy’ and gender and society,” she said.

But the B.I.S. program also led her to explore the boundaries of her art and she found Ruffin Hall, the McIntire Department of Art’s studio building. There she made an important discovery.

“I felt like this was the missing piece of what I needed,” she said. “I needed the B.I.S., too, but there was a missing component and it was that I hadn’t taken an art class since I was in the B.I.S. program and I felt that this is what needed to do. And so it felt great to be able to get my hands dirty, smell the materials and talk with other people who see the world visually. It was the reminder of what I need to do.”

“Amanda juggles a lot, holding down a full-time job while trying to get her education and make art,” Marlatt said. “She manages to do so with a lot of love and enthusiasm for learning. I really enjoy her in my classes, as she offers a different role model of what a student can be to my other, more traditional students.”

“I think film is an art form that is unique from sculpture,” she said. “I like the idea of documenting people in a way that sculpture can’t.”

Everson lauds Downing’s progress. “Amanda is amazing,” he said. “She makes fantastic films. She has a great eye and has a ton of potential. I dig students who listen and grow right before you.”

Downing is learning the basics of 16-millimeter film production, developing and splicing and synchronizing the sound track with the visual frames.

“It’s learning photography first, how to use the camera, and then filming our idea of a visual haiku,” she said. “Learning film has taught me how to look differently at the world than I did artistically, differently than I have with other mediums.”

While she is still learning about film, she is already thinking about how to merge her areas of interest.

“I am learning how to document life – and that is an art form in itself – and somehow I want to bridge that with sculpture,” she said.

Nor does she see this as the last change in her art.

“I think my art is ever-changing, evolving, because I am moved socially by what I see every day, and my interactions with other walks of life,” she said. “So that is in my art and, yes, that changes.”

And it is not just her art, but the evolution of art in general.

“Visual art is not dead, and sculpture or painting is not dead, and it is ever-shifting and when it seems like this is the last movement of art and you can’t go any further, you can,” she said. “My art, whatever I make, is created by the social climate of where I work or where I live in the world.”

As she wraps up her B.I.S. degree, Downing is pondering the future.

“I’m still trying to figure that out,” she said. “I will probably pursue a masters’ in sculpture, but I have to work on that a little more before I decide. With the B.I.S. program, I have realized I still have to do art. It’s what I have to do.

“I think it is probably similar to writers who have to write,” she continued. “… I think I tried to turn my back on art, because it’s not an easy life to live, but I just have to.”

How a Single Email Changed a Life END_OF_DOCUMENT_TOKEN_TO_BE_REPLACED

Fall Is in the Air on Grounds END_OF_DOCUMENT_TOKEN_TO_BE_REPLACED

At UVA, There Is a Club for Everyone END_OF_DOCUMENT_TOKEN_TO_BE_REPLACED