Class of 2018: This Graduate Focused Her Film Studies on Being Black at UVA 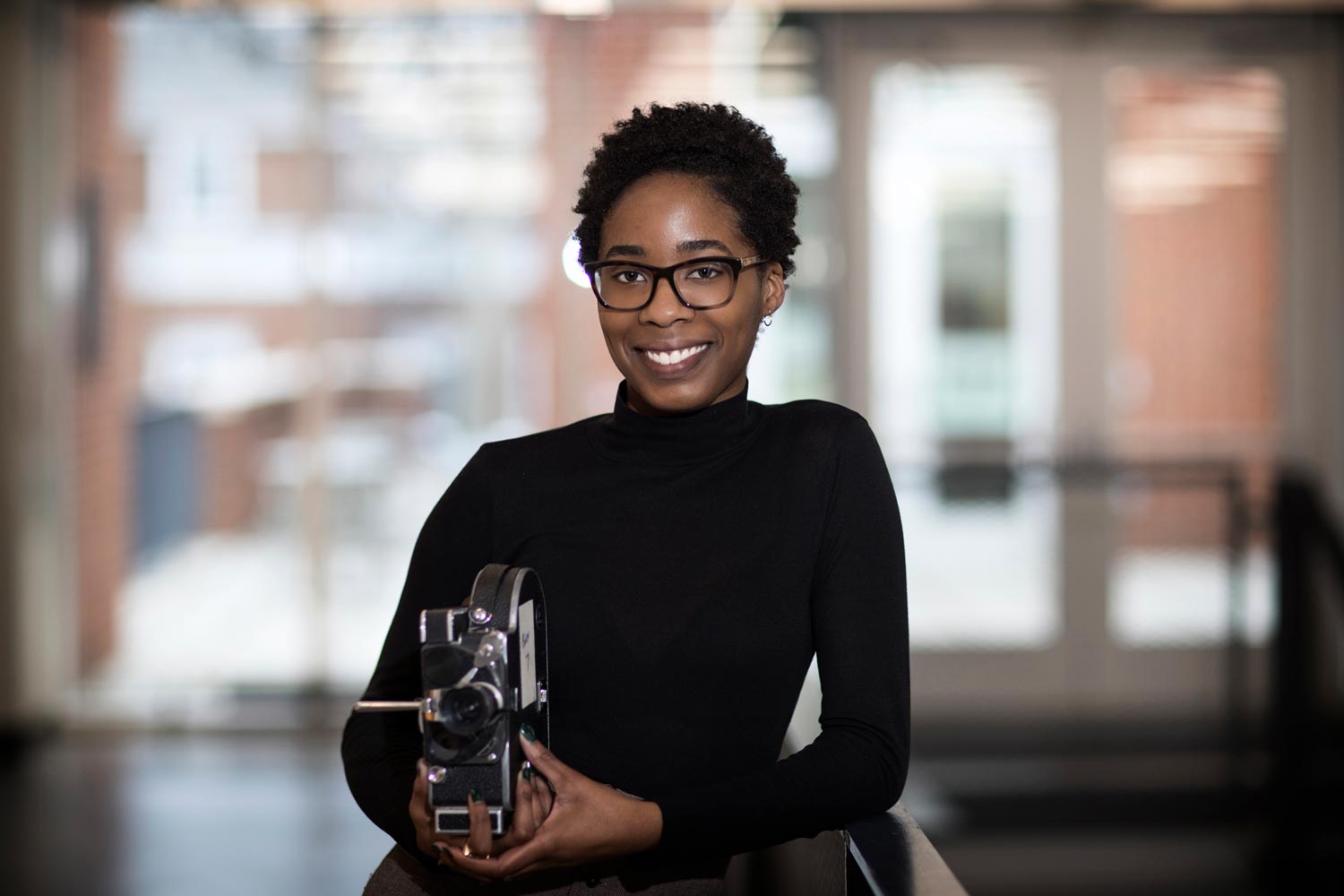 After walking the Lawn, Paige Taul will attend graduate school at the University of Illinois at Chicago to continue her film studies. (Photo by Dan Addison, University Communications)

Paige Taul’s arrival at the University of Virginia was abrupt. Her single mother dropped her on Grounds in 2014 and then got on a plane to take Paige’s twin sister, Adrian, to school at Champlain College in Vermont.

“Orientation was my first day here,” Taul said. “My mom helped me move into my room and then said, ‘Alright cool, I’ll see you later!’

“They got on a plane and they went to drop my sister off at college and then I had to figure everything out. I remember asking for directions and someone said, ‘It’s across from the Rotunda.’ I didn’t know what that was!”

Taul was a quick learner. In her time here, the Oakland, California native discovered something surprising about herself: She wanted to become a filmmaker. “I’d always enjoyed watching films,” she said.

So she took a couple of courses in film history and film criticism.

“I was introduced to Kevin Everson, and film has been in my life ever since,” she said. Everson is a popular professor of film in the McIntire Department of Art and a mentor to Taul.

“Paige is a sponge,” he said. “The best artists are nominally the best listeners. Paige is an amazing listener. She pays attention to all the little details.”

Taul will graduate this month as a distinguished major in studio art with a concentration in cinematography. The details Everson references are revealed in the six short films she has made at UVA exploring the black student experience at the University.

Whenever a film idea popped into her head, she would whip out her “teeny, tiny” black Moleskin notebook and write it down.

After she walks the Lawn May 19, Taul will pursue graduate film studies at the University of Illinois at Chicago.

Before she heads off to her new scene, Taul talked with UVA Today about three of her films that mean a lot to her.

Q. Tell us about “Transit.”

A. Transit was filmed during Black Alumni Weekend last spring. I went out with a friend to the “black bus stop,” which is in front of Monroe Hall. It is historically a hangout place for black students, [though] it’s not used really the way it used to be by the black student population. … It used to be much bigger.

During Black Alumni Weekend last spring, some alumni came back to the bus stop in hopes of having conversations with current black students about the space.

It’s very important for them, especially those from the ’70s and ’80s, because it was very hard for the black student population in the ’70s. It’s always been hard, but it’s a different kind of difficulty. I interviewed three people who were kind enough to share their stories of what it was like to go to UVA.

The film is in black and white. I love analog film. I like the texture. I think shooting with film makes me be more careful and considerate about how I choose my images. Because film is expensive, it forces a carefulness.

I think that digital files can be too sharp. I don’t necessarily think that I need to see everything in the frame – which is not to say that my films are out of focus. There is something special about keeping this practice alive.

Q. What is “It Makes Me Wanna” about?

A. For this one, I was interested in exploring a moment of inclusion. Not a universal inclusion, but cultural inclusion.

I was on a class trip and they were playing a song. I made a face and everyone was like, “Oh, are you OK, Paige?” I said, “Yeah, this is my dance face.” That’s what you do when the beat drops and it really hits you and you can’t really do anything else but respond to it.

So I went home and told my friends and they were like, “Yeah, I know what you’re talking about.” I saw a difference of understanding between my black friends and my white friends, so I thought, “Here is a phenomenon that I would love to capture.”

“It Makes Me Wanna” is close-ups of four friends. They chose their favorite songs and I said, “Dance to it and don’t worry about what you’re doing.”

A. That was an interview with my mom about her relationships with her family, with her religion and blackness.

She talks about being the black sheep in the family. She grew up in Ashland, Kentucky. It’s a mostly white town.

She talks about being the non-conformist in her family and not being religious in the same way. She was the only one who moved away from home; she moved to California. … In high school, she was part of the cheerleading team – it was an all-white cheerleading team; she was the only black member. She would talk about being a non-conformist through the lens of her family, but then as a condition of being a cheerleader, you have to both conform behaviorally and physically to the team.

I filmed Cameron Bishop, an African-American UVA cheerleader, doing some moves and overlaid the audio of the interview with my mother.

(Note: The short was recently accepted to be featured in the first edition of “Kunstkammer,” a new undergraduate art publication at Princeton.)

Taul said she will deeply miss Everson’s cinematography class. She took different levels of the course for three years. “You get really close to all the people,” she said.

How a Single Email Changed a Life END_OF_DOCUMENT_TOKEN_TO_BE_REPLACED

Fall Is in the Air on Grounds END_OF_DOCUMENT_TOKEN_TO_BE_REPLACED

At UVA, There Is a Club for Everyone END_OF_DOCUMENT_TOKEN_TO_BE_REPLACED