Class of 2018: Marine, Mom Finishes What She Started Decades Earlier 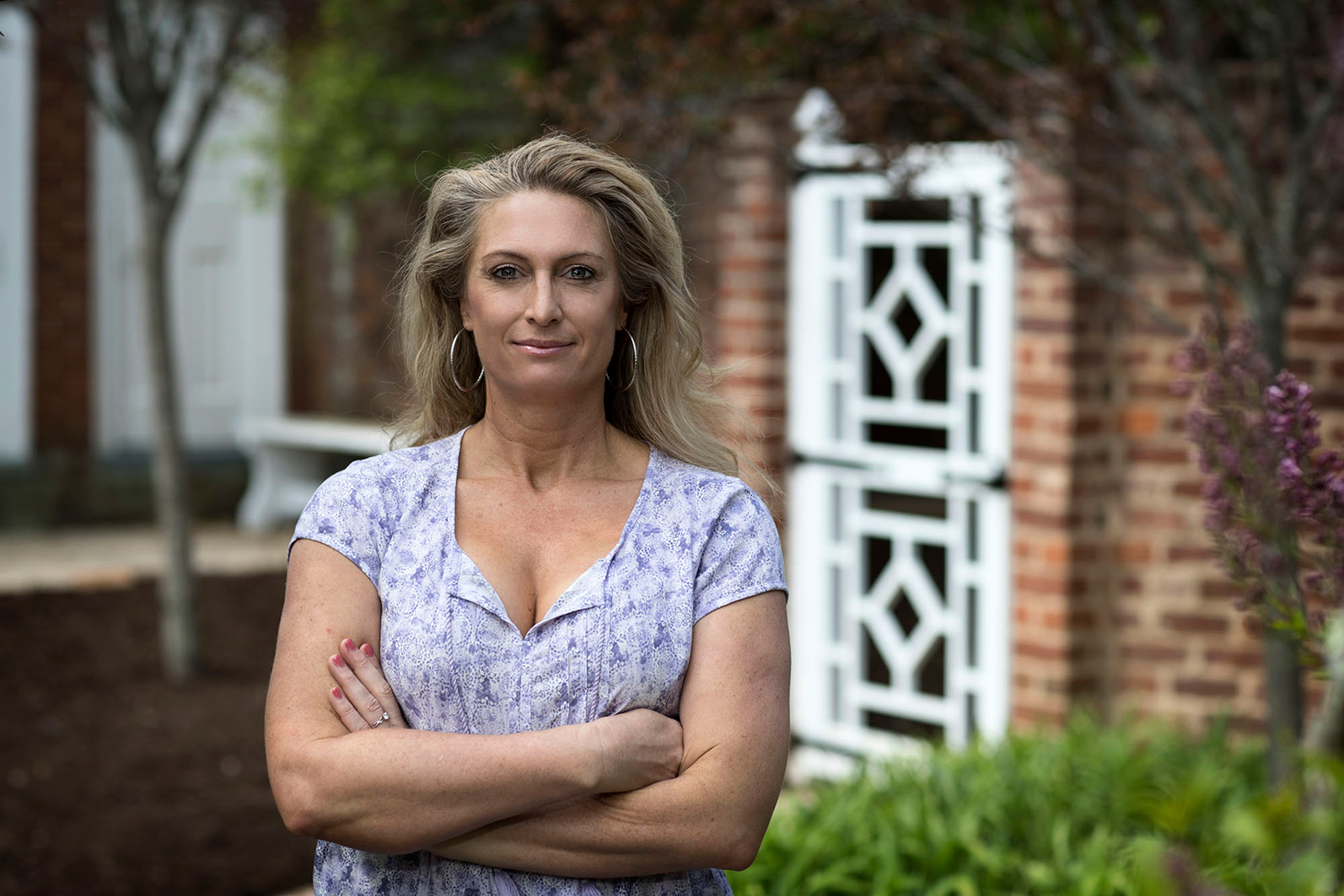 UVA fourth-year student Kim Johnson grew up in a northern California town of only about 1,000 people. (Photo by Dan Addison, University Communications)

As a child, Kim Johnson wondered if she might someday live in the State of Jefferson, a rural region encompassing parts of northern California and southern Oregon that lawmakers had been attempting to turn into the country’s 51st state for years.

The proposed name was said to have derived from a vision Thomas Jefferson had for the Pacific Northwest after he commissioned the Lewis and Clark Expedition when he was president in 1803.

Suffice it to say, Johnson never got to call the State of Jefferson home. But you might say she’s doing that one better. Next month, Johnson will graduate from the School of Jefferson.

It’s an experience the 45-year-old in the University of Virginia’s Frank Batten School of Leadership and Public Policy didn’t think possible.

Not after dropping out of college at the age of 19. Not after embarking on a 20-year career in the Marine Corps. Not after having two daughters.

“I never even conceived that an opportunity like this would have been available to somebody like me,” Johnson said.

The daughter of a logger and schoolteacher, Johnson was born in Mount Shasta, California and grew up in nearby McCloud – a town of barely 1,000 people. She was one of 23 people in her 1991 high school graduating class.

UVA Student Council and the Pioneer recently published a profile of Johnson as part of a series of student videos.

A good student and athlete in high school, Johnson received financial aid to attend Humboldt State University in Arcata, California – but posted an 0.9 grade-point average and lasted only one academic year.

“I didn’t know what I wanted to be, and I didn’t have the discipline,” Johnson said. “I felt like I was swimming. Going from a small town to a big university was a huge jump.”

Over the next couple years, Johnson took classes at a community college while working as a maid at Wyntoon, a private estate near her hometown owned by the Hearst family that was frequented by politicians and celebrities, including Barbara Walters, Calvin Klein and Nancy Reagan.

On one occasion, Johnson said she got to talk with the former first lady.

“There were these two gentlemen standing there and so I offered them hors d’oeuvres and they wouldn’t take anything,” said Johnson, smiling. “Later on, I found out they were Secret Service!

“That was a whole world that you only read about in magazines.”

Eventually, Johnson was overcome by a feeling that she had more to offer, that there was “more out there.” And she knew she wasn’t going to find it in northern California.

So in 1994, just a few weeks after her 21st birthday, Johnson joined the Marines.

“For me, the military offered a path to potential,” said Johnson, whose father had served in Vietnam. “There was a structure. I wasn’t floundering with all these choices and options.

“I felt like it was a good fit with my personality, and I had played sports all my life – so physically I wasn’t afraid of it.”

During stops in Japan and San Diego, Johnson and her then-husband had two daughters. In 2008, when her second daughter was 8 months old, she was deployed to Iraq for six months. In 2011, Johnson – by this time an E-8 Master Sergeant – was shipped out to Afghanistan.

“It was an amazing experience,” Johnson said. “Our team ended up having 96,000 mishap-free air operations.” 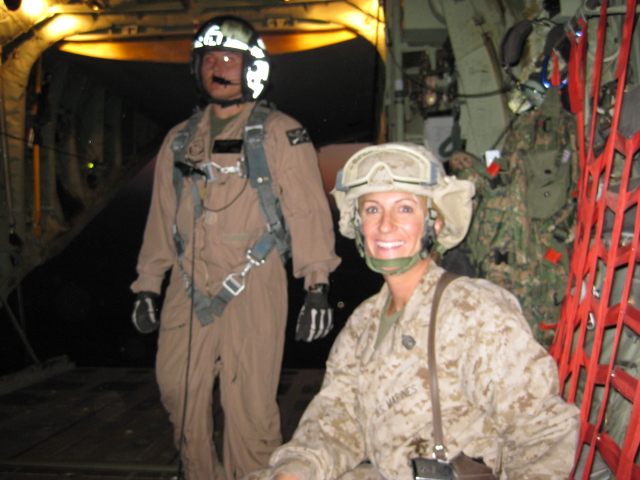 UVA fourth-year Kim Johnson, right, was deployed to Al-Asad Air Base, Iraq in support of Operation Iraqi Freedom in July of 2008. (Contributed photo)

One tough thing, however, was being so far from her daughters.

“I knew what I was getting into when I volunteered for the military – I went in eyes wide open,” Johnson said. “But every once in a while, my heart stops because I know what I’ve missed.”

Johnson said she was on a path to be promoted to an E-9 Master Gunnery Sergeant, which would have made her the first-ever female E-9 in the air traffic control community.

“It was tempting to chase that,” she said, “but there was something in me that knew that would not be fulfilling. I loved my job, but I always knew there was a piece of the puzzle missing because I hadn’t finished my degree.”

Johnson resumed taking classes toward her associate’s degree at Northern Virginia Community College in Alexandria and began researching schools at which she could earn her bachelor’s.

Johnson Googled the phrase “Majors on Leadership” and Batten popped up.

“The website said, ‘Are you relentlessly optimistic? Are you uniquely talented?’” Johnson recalled. “I was like, ‘Yes, that’s me!’ It was marketing at its best, but it worked. I was like, ‘Sign me up!’”

Especially with a transcript that included her work at Humboldt State. Just to have a chance at getting into UVA, Johnson needed to take a combination of advanced classes and placement tests in microeconomics, math, English and Spanish. The Spanish was particularly challenging, since she hadn’t taken that in more than 25 years and needed to earn credit equivalent to two years.

But Johnson said a “vision” of attending UVA kept pulling at her.

“I was like, ‘This is something I really want to do,’” she said.

Johnson ground her way to a 4.0 GPA, made the necessary scores on placement tests and was accepted into Batten.

She hasn’t looked back.

Of course, there were a few double-takes when she first started. After all, she is roughly twice as old as the average student.

But Johnson assimilated quickly, according to Batten fourth-year Robert McCarthy.

“Kim – and everyone will tell you this – is probably everyone’s favorite classmate because of how much she cares,” said McCarthy, Batten’s undergraduate council president. “It’s so cool to watch her set her mind to something and then go out and do it. Everyone always benefits from her visions.”

McCarthy recalled a group project that several students were procrastinating on as an example of Johnson’s leadership.

“Kim was just like, ‘Guys, it’s time to hunker down! We’ve got to get this done!’” McCarthy said. “She really inspired us to meet the deadline, and as a result, we did a much better job on the project than I think we would have. She added a level of accountability that I had never had before on a group project.”

Being a part of strong student cohorts is one of the things Johnson has cherished most about her Batten experience. “I foresee maintaining relationships with some of these students for the rest of our lives,” she said.

Last April, as part of professor Gerald Warburg’s “Public Policy Challenges of the 21st Century” course, Johnson quizzed Virginia U.S. Reps. Gerry Connolly and Tom Garrett about regulations protecting student veterans via the G.I. Bill. As she did it, Johnson distributed memos she had prepared beforehand, unbeknownst to her classmates.

“It was quite inspiring,” McCarthy said. 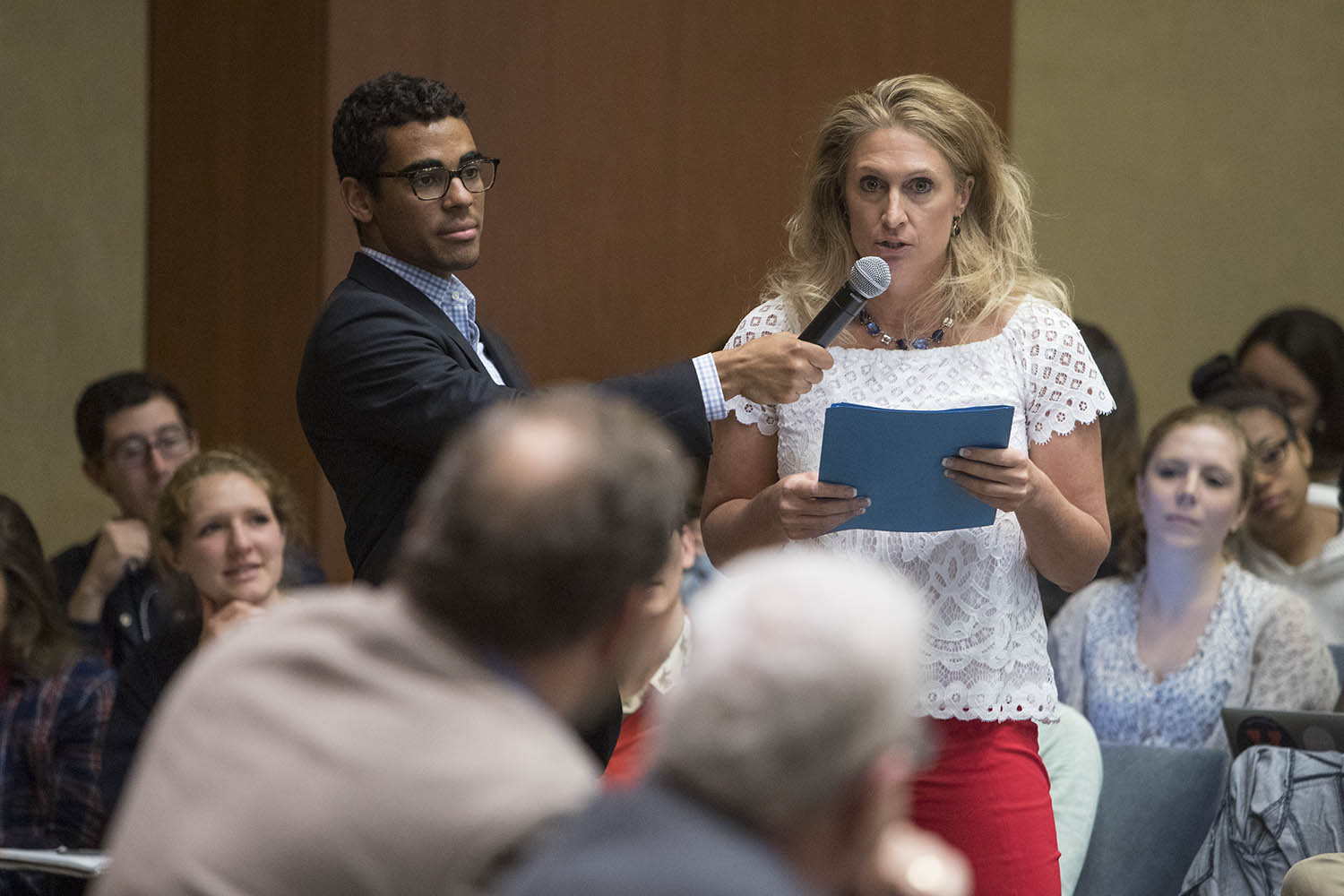 Johnson is in the process of launching a UVA chapter of the Student Veterans of America.

“Once SVA recognizes us, we are on the map,” Johnson said, “and transitioning service members – as well as veterans who are considering UVA – will be able to reach out to us and be better positioned to make an informed choice as to where they should pursue their academic potential.”

That’s something Johnson has done in spades.

Other than spending more time with her daughters – they’ve been living in Portland, Oregon with her ex-husband – and helping out with a chicken farm her fiancé recently purchased in Georgia, Johnson isn’t sure what she will do after she walks the Lawn.

One thing is for sure: Johnson has come a long way since her time at Humboldt State.

When she first got to Grounds, she was eating a Bodo’s bagel outside of Brooks Hall when she looked up and saw something she couldn’t believe. One of the names on the building was Alexander von Humboldt – the Prussian explorer and scientist who Humboldt State is named after.

Johnson subsequently learned that Humboldt had been good friends with Thomas Jefferson.

In a strange yet exciting way, Johnson’s past and present have intersected.

Now she can’t wait to see what the future holds.

How a Single Email Changed a Life END_OF_DOCUMENT_TOKEN_TO_BE_REPLACED

Fall Is in the Air on Grounds END_OF_DOCUMENT_TOKEN_TO_BE_REPLACED

At UVA, There Is a Club for Everyone END_OF_DOCUMENT_TOKEN_TO_BE_REPLACED