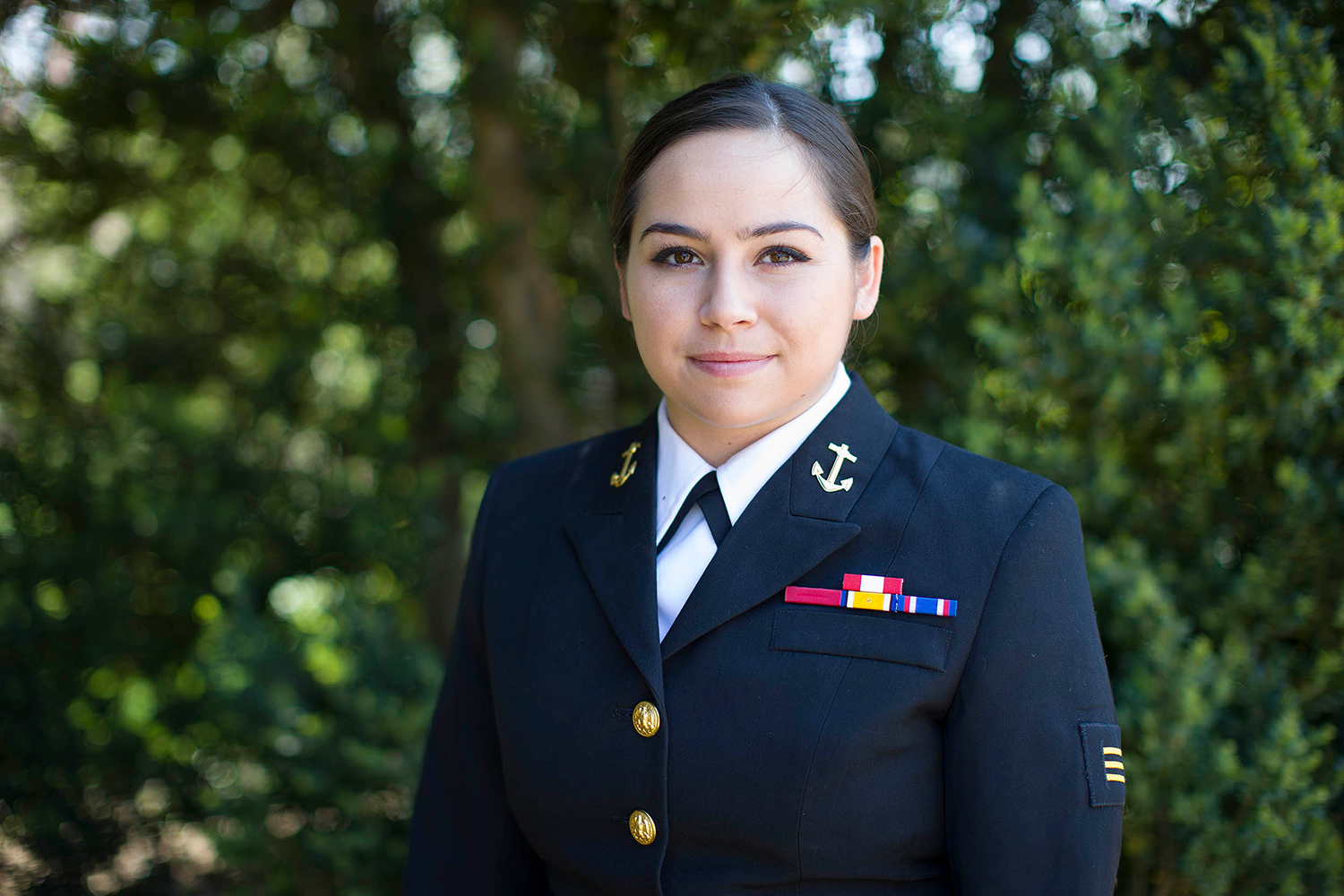 U.S. Navy Midshipman Maribeth Salinas will earn her University of Virginia degree in architecture on May 20, but instead of designing buildings, she’ll spend her next eight to 10 years in the military. Salinas, however, will head to flight school to reach for the skies, not carrier decks.

She follows her family’s military tradition – her father and sister both attended the U.S. Naval Academy and became Marines. But when she chose architecture as a major, she didn’t predict she’d eventually work on a project in the Pueblo, Colorado neighborhood where her dad grew up.

Her choices might seem unusual, but Salinas successfully maneuvered her way through the courses and activities in her education strategy.

Q. What made you decide to go into Navy ROTC? Are you from a military family?

A. I’m from Stafford, near Fredericksburg. My dad and my sister went to the Naval Academy and then into the Marines. I’ve always been exposed to the military. I know how many great opportunities it gave my family, and some friends, too.

Q. I understand you’re going to flight school after graduating?

A. We had no pilots in the family. Then my sister married a pilot, so he told me about aviation. I thought I’d like it, compared to other possible jobs.

Q. How are you combining this with architecture? Is there any connection between the two?

A. Not exactly. I knew going to college, being in ROTC, I would get a job after college in the military, so I wanted to pursue something I was interested in. Architecture combines some of the technical and critical thinking used in math, which I liked in high school, but you solve problems through design. I also liked art, the design aspect.

The architecture major has two concentrations: pre-professional – specifically buildings – and design thinking, which I chose. I’ve also been doing landscape and urban planning, especially in my design thesis studio.

Q. What is your design thesis project?

A. I’m working on a neighborhood of Pueblo, Colorado. Pueblo is where my parents are from, and this neighborhood is where my dad grew up. It’s primarily low-income and Hispanic, and it’s isolated between the highway and the Arkansas River.

About 10,000 people live there, and there’s no grocery store in the area. I’m designing a bridge that would create a hub on one side for the places around there, connecting the neighborhood and downtown. I’m doing a lot of repurposing – for instance, an abandoned industrial area.

My dad is excited I’m doing this. He can see the neighborhood could be improved.

Q. How do you think what you’ve learned in architecture will help you in your military career?

A. I think the skills I’ve learned in the Architecture School will be helpful to any job. In architecture, instead of tests, we have reviews. The final review is more formal in presentation, and they actually bring in outside architects for that. You have to present your work in front of people several times a semester, so I’ve gotten comfortable with that.

We’re trained in critical thinking and problem-solving of design issues.

We also learn to think three-dimensionally. I think being able to visualize in 3-D should be helpful for aviation.

I was asked to write an article about it for the [Navy ROTC] alumni newsletter.

Q. Where and when will you go to flight school?

A. Pensacola, Florida in September. That’s where the Navy and Marines go. It takes two years to get your wings. I might have to move, depending on what kind of aviation I choose, for part of the training.

I’m keeping an open mind about what aircraft I’ll fly, but I’m leaning toward the P-8. It’s like a 737. Its mission is anti-submarine, and also anti-surface. It doesn’t land on carriers. It would be a good set-up if I decide later to fly with commercial airlines.

Q. How do you feel about your military obligation?

A. You’re there to complete a mission. I share the core values of the military – honor, courage and commitment. You know what you’re getting into, that there’s always risk involved. I’ve had good training.

Q. Professors who made an impression on you?

In architecture, my studio professors have really helped shape my interests. I went to Venice for the fall of 2016 [one of the Architecture School’s signature study-abroad programs]. That was amazing! I worked on a landscape architecture project with Bill Sherman [who chairs the architecture department] and he gave me free rein on my project.

Q. What will you miss about UVA?

A. I volunteered with the PB&J Fund [a Madison House program]. I’m also in a sorority, Sigma Kappa. I’ve also played on a local soccer organization, or SOCA, team – we’re all UVA students – that’s co-ed. I try to keep playing for fun.

Charlottesville is one of the best places for college; there are so many things to do.

There’s good food. There’s good hiking. I just went to the Tom Tom Festival. At the farmer’s market, they had an Iron Chef-type competition.

But I’m excited to live by the beach, and for my next steps.

How a Single Email Changed a Life END_OF_DOCUMENT_TOKEN_TO_BE_REPLACED

Fall Is in the Air on Grounds END_OF_DOCUMENT_TOKEN_TO_BE_REPLACED

At UVA, There Is a Club for Everyone END_OF_DOCUMENT_TOKEN_TO_BE_REPLACED