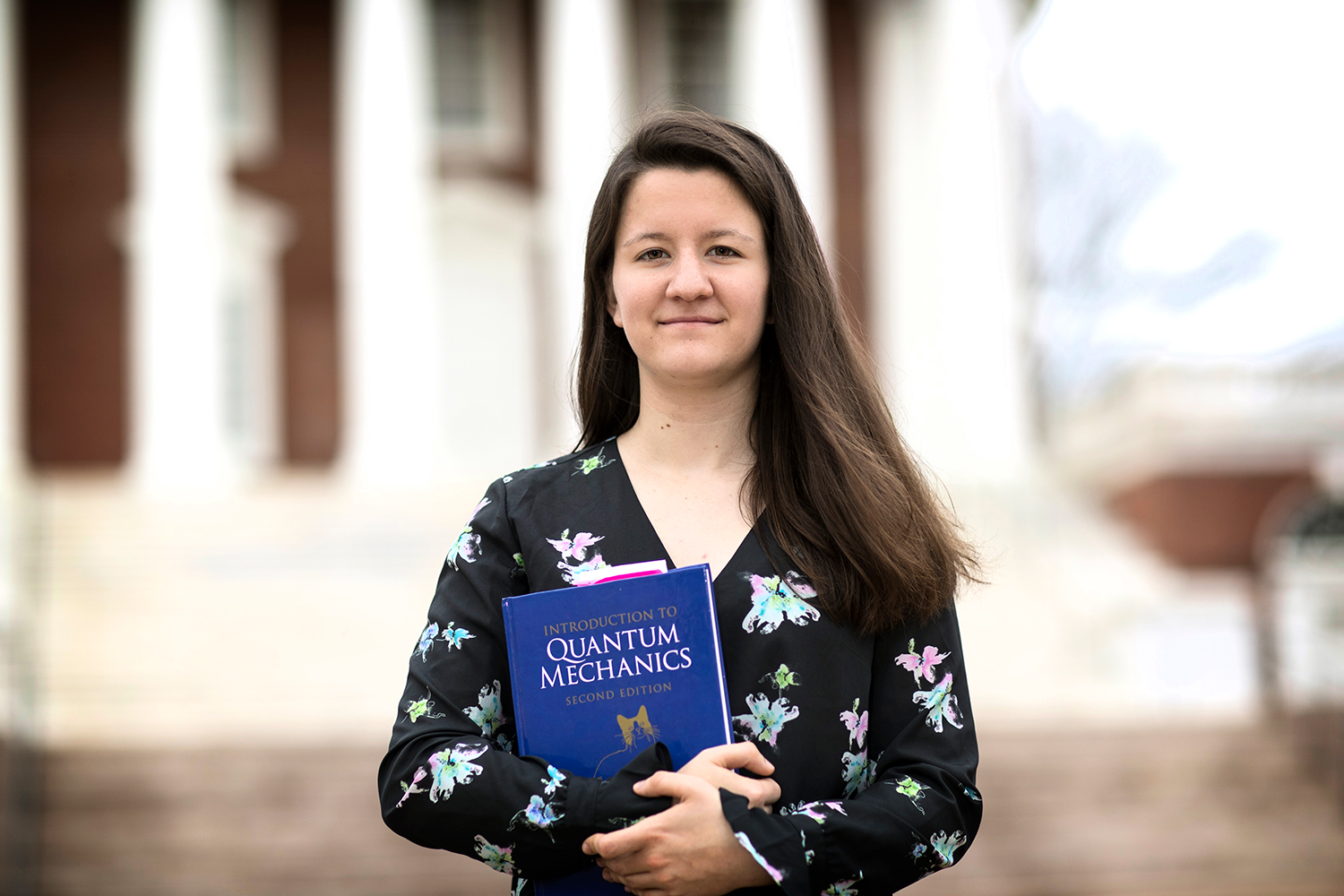 Bridget Andersen is headed to McGill University in Montreal to pursue a Ph.D. in astrophysics. (Photo by Dan Addison, University Communications)

University of Virginia student Bridget Andersen traveled 8,000 miles to South Africa last summer specifically to see something that she ultimately didn’t get to see – the winking of a star.

Andersen, who will graduate this month with a double-major in astronomy-physics and computer science, was a lead observer in a team of astronomers in South Africa who, among 23 other teams, spent a week seeking to determine the precise trajectory of a tiny mass (or possibly two tiny masses) of rock and ice in the far reaches of our solar system beyond Pluto, in a region called the Kuiper Belt.

The object – if indeed it is a single mass – is dubbed Kuiper Belt Object 2014 MU69. It’s important to astronomers because it is the target of a Jan. 1, 2019 flyby of the New Horizons spacecraft, the craft that famously flew past Pluto in the summer of 2015. For NASA to achieve a close flyby – and obtain spectacularly detailed images of the object – its precise location must be calculated well in advance so as to direct New Horizons’ flight path.

Andersen and her team spent a chilly night camped out on a farm with sophisticated portable telescopes set up next to a shed where several springbok carcasses had been strung up and gutted for butchering by the land owner.

“It was a bit gruesome,” Andersen said. “But we were focused on trying to see one particular star blink out for just an instant.”

The winking of that star, visible only from the Southern Hemisphere, would have meant that MU69 had cast its shadow in front of the star as it passed, betraying its location and thereby trajectory.

It ultimately worked out fine that Andersen’s team and the 23 other teams spread out in a long line across parts of South Africa were not exactly on the center line of the object’s path. Just a few weeks later, observing teams in Argentina (including from UVA), finally witnessed the occultation of MU69, proving its precise location. It all was a matter of timing and calculus, the combination of astronomy and physics that has so intrigued Andersen.

“It was an incredible experience to go to South Africa and participate in an adventure like that with other people so dedicated to astronomy,” she said. “The extreme environments of space provide us with spectacular laboratories for probing and answering challenging questions about how the cosmos came together.”

Andersen has had many adventures during her four years at UVA. The Great Falls native traveled on an internship in the summer of 2016 to the National Radio Astronomy Observatory Array Operations Center in New Mexico, where she worked on a project aimed at observing “fast radio bursts” – bright, flashes of radio light lasting only milliseconds. The origin of these bursts has been one of astronomy’s mysteries since their first detection in 2007. At the end of the summer, Bridget’s NRAO advisers were finally able to localize a burst to a source outside the Milky Way galaxy.

“Working on such a timely and cutting-edge project was truly exhilarating,” Andersen said.

She also has won competitive summer research internships at the Space Telescope Science Institute in Baltimore and at the Harvard-Smithsonian Center for Astrophysics.

“Bridget is probably the most brilliant student I have seen at UVA,” UVA astronomy professor Craig Sarazin said. “She is also remarkably level-headed and an extremely nice person. She must have some flaw somewhere, but I have yet to encounter one.”

During her internship with the Space Telescope Science Institute, which involved designing a web portal for use by future James Webb Space Telescope observers, Andersen realized that she wanted to know more about computer coding designed specifically for making sense of complex astrophysics data. So she took on an intensive second major in computer science. Despite a very heavy course load, she is completing her double degree in four years with a nearly perfect 3.95 grade-point average.

For her efforts, last year she won a Barry M. Goldwater Scholarship, among the highest national honors for undergraduates in science.

“Even though Bridget chose to specialize in astronomy for her research, she also took the toughest physics courses and excelled in them, not only with regard to scores, but first and foremost in terms of mastering difficult concepts such as the foundations of quantum physics,” physics professor Olivier Pfister said. “She is the student who consistently asks, and answers, the toughest questions and relishes the most challenging assignments.”

An Echols Scholar and a College Science Scholar, Andersen serves on the executive board of UVA’s Astronomy Club and is a member of the Society of Physics Students, among other clubs and organizations, including the Sigma Pi Sigma Physics Honor Society.

“UVA has been the right place at the right time for me,” she said. “Our astronomy department is a great place to learn, and I’ve had the opportunity to really get to know my professors and other students. I’ve also had great mentors in the physics department. This university is a place where you can become a new person. I’ve felt like I belong.”

Andersen is headed to graduate school at McGill University in Montreal. The Canadian university is soon bringing online a revolutionary new radio telescope designed to answer major questions in astrophysics and cosmology. It’s everything Andersen could want from a new place to learn.

The Bigger Picture: Starry Night in the Rotunda END_OF_DOCUMENT_TOKEN_TO_BE_REPLACED