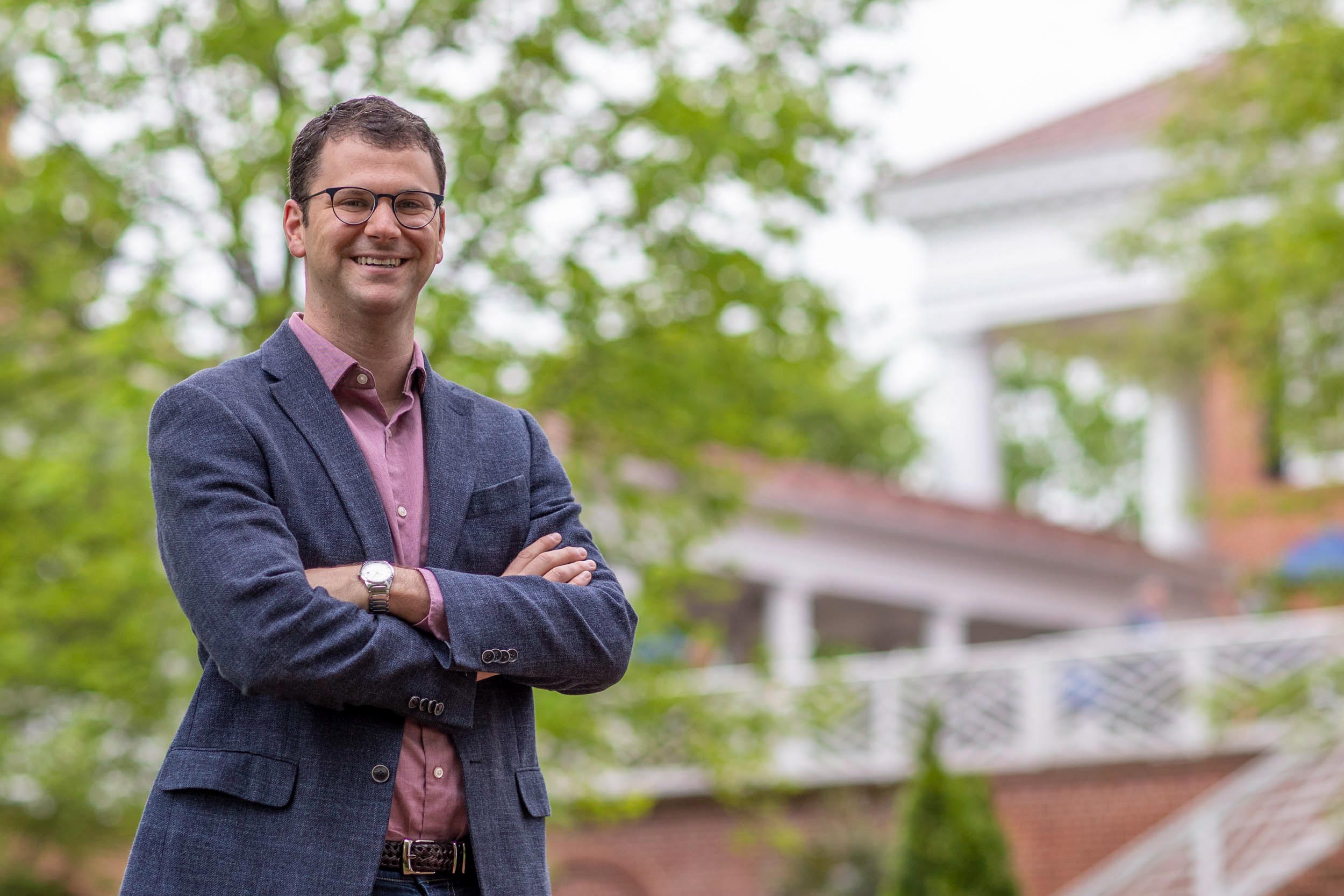 Ben Leiner is set to graduate in May and will take a job at Uber Freight in San Francisco. (Photo by Sanjay Suchak, University Communications)

Many University of Virginia students want to make a difference in business, technology or public policy. Ben Leiner is focused on all three.

Leiner, who will graduate this month from the Darden School of Business, covered the politics part before pursuing his MBA. The Baltimore native returned to Washington, D.C., after earning degrees in history and economics from Emory University. His first job was in Congress, where he worked as a floor aide for current House Speaker Nancy Pelosi.

It was a lesson in both how democracy works and how hyper-partisanship can derail it.

“I was sitting on the floor of the House of Representatives, watching well-intentioned legislation die simply because of the party label in front of it,” he said. “My ultimate question was how my career could address the problems I care about. Congress struck me as a very powerful place to address those problems, but also as a place that was woefully misused and incredibly inefficient.”

He explored other avenues, including working as a pollster for a Democratic political consulting firm in New York and a government affairs researcher for Atlantic Media, before serving as executive director of My Ride to Vote in the eight months leading up to business school. The organization, a political action committee, worked with rideshare companies Uber to fund rides to the polls for low-income voters.

Leiner was involved with the organization’s efforts around a 2017 congressional election in Georgia, when Republican Karen Handel beat Democrat Jon Ossoff in a tightly contested runoff. The experience taught him a lot about his own strengths.

“I realized that I am passionate about addressing civic issues and voting rights, and that my role in that ecosystem is not as a lawyer or an activist, but as a manager – someone who has an organization or company working on those issues and is able to run it effectively,” he said.

That is where Darden came in.

“I had a lot of youthful energy, but I did not have many structured skills,” he said. “I wanted an education that would prepare me for those opportunities.”

At Darden, Leiner served as the president of the Darden Business & Public Policy Club, where he brought in various MBAs who have run for political office and hosted discussions on civic technology. He also created a Darden partnership with USA Facts, a nonpartisan organization founded by a former Microsoft CEO to promote the use of data in policymaking. As part of the partnership, Leiner helped facilitate a data visualization competition for first-year Darden students.

He broadened his horizons beyond Darden’s Grounds, traveling to countries ranging from Sri Lanka to Sweden and, closer to home, participating in UVA’s Tri-Sector Fellows program with students in the School of Law and the Frank Batten School of Leadership and Public Policy. He even joined the UVA Chamber Singers, a choral ensemble that includes undergraduate and graduate students, as well as a few faculty members.

He also wrote and taught a case study with Darden professor Bobby Parmar on one of today’s foremost public policy issues: the proliferation of “fake news” on social media.

“The first thing that strikes you about Ben is his burning intellectual curiosity,” Parmar said. “He’s incredibly smart; he wants to use his knowledge and capability to make the world a better place, and he came to me with this really important question that society is wrestling with now.”

Over meetings in Parmar’s office and breakfasts at Marie Bette Cafe, professor and student researched Facebook’s efforts to fight misinformation and created a case study exploring how effective those efforts were and how the company might do better.

Teaming up on cases, Parmar said, allows professors and students to learn from each other in a new way.

“You get to explore a new topic together,” he said. “I learn as much from the students as they do from me, and there is a high degree of trust when you are writing a case together.”

Leiner and Parmar presented the case in a “flash seminar” on Grounds – “Fake News and the News Feed” – attended by undergraduate and graduate students from many different schools at UVA. They hope to teach it again this fall at Darden’s Rosslyn location, as part of the business analytics master’s program.

“One of the most important things we took away is the idea that ethics is inseparable from business concerns, particularly in the context of emerging technology,” Parmar said. “Too many tech companies think that issues around fairness or privacy can be solved with an algorithm. But you need to go much deeper than that.”

That’s one lesson Leiner will take with him to San Francisco, where he will move after graduation to work for Uber – the same rideshare organization he partnered with through My Ride to Vote.

This time, he will be working on the company’s new Uber Freight division, which hopes to upend shipping and long-haul trucking in the same way the original Uber shook up the taxi industry.

“I wanted to come out of business school with a job that would allow me to build really effective management skills,” Leiner said.

He’s particularly excited to work on a fledgling start-up within a large, successful company that is set to go public later this year, and to work in an industry that wields so much economic influence.

“The freight industry underpins the entire economy, not just of the United States, but of the world,” he said. “I will be doing a lot of customer research, talking to shippers and truckers around the world. … I think it will be a fantastic experience.”

Long-term, Leiner has not ruled out a return to the public sector.

“Ultimately, once I get some experience in the private sector, I can see how those skills might translate to the public sector,” he said.

Wherever he lands, Parmar has faith that Leiner can make a difference and build bridges among those in government, business and tech.

“He is passionate about finding places in which those three things can mutually benefit each other,” Parmar said. “To do that, you need to deeply understand the different perspectives and translate that understanding into insights for other disciplines. Ben is very well-poised to play that role.”

For his part, Leiner is confident in the education he received at Darden.

“Darden prepares students to be so much more than businesspeople,” he said. “The world is full of problems, and we need people with the skills, empathy and ethical framework to tackle those problems. I feel like my Darden education prepared me to do that.”

What’s the True Story of Brooks Hall? This Architectural Historian Has the Answer END_OF_DOCUMENT_TOKEN_TO_BE_REPLACED

At UVA, There Is a Club for Everyone END_OF_DOCUMENT_TOKEN_TO_BE_REPLACED