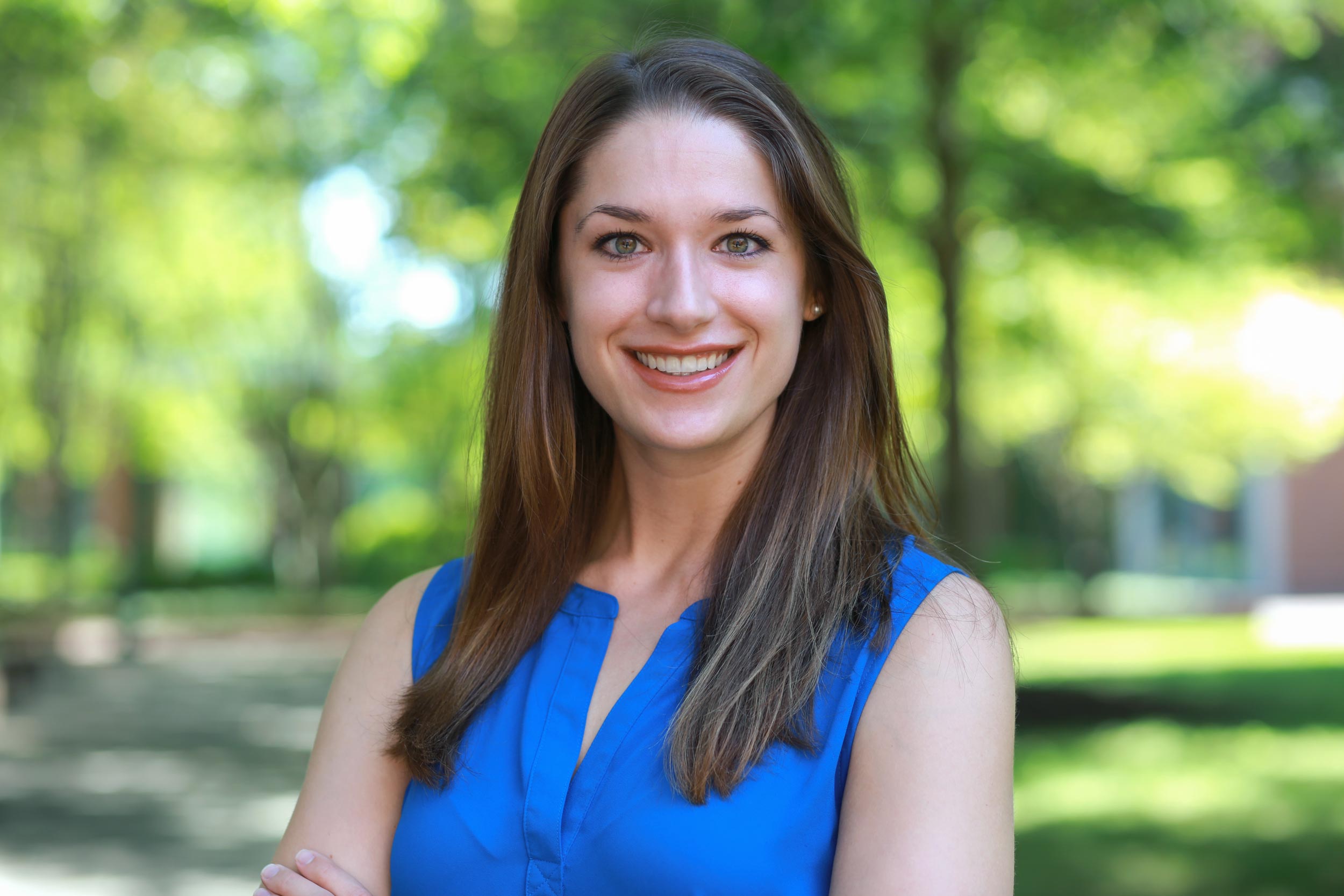 Kendall Burchard says she’ll graduate a different person than she was when she arrived at UVA Law. (Photo by Julia Davis, School of Law)

Kendall Burchard, who will graduate Sunday from the University of Virginia School of Law, might never have considered going to law school. There were no lawyers in her family, at least that she knew of.

But through the power of television, Burchard had Sandra Day O’Connor, the first woman to ascend to the U.S. Supreme Court, to serve as a role model.

“Law school has been a lifelong dream,” Burchard said. “I first remember seeing Sandra Day O’Connor on the news when I was in third grade or so. I realized then, and told my mother, that I wanted to be a Supreme Court justice.”

Burchard has since revised that early aspiration. She simply wants to be the most effective legal advocate she can be – and let the future hold what it may.

Fortunately, her experiences at the Law School and some strong role models at UVA have gotten Burchard off to a good start.

As a member of the Appellate Litigation Clinic, Burchard and classmate Amanda Lineberry won the first case of their careers this year, before the Fourth U.S. Circuit Court of Appeals. They built on the work of previous clinic students in Mangum v. Hallembaek, which corrected a legal error by the federal Bureau of Prisons in interpreting a judge’s directions for sentencing.

“We found out in August we would be arguing in September. As soon as we returned to Grounds, we began [practicing for the court appearance],” she said.

Their winning appeal, which followed the remand previously won by the clinic, orders the lower federal court to reconsider their client’s request for time served, which could spare him 10 years in jail. Burchard gave the rebuttal to the government’s case.

“It was an experience unlike any other,” she said.

Among her additional accomplishments while at UVA Law, Burchard co-wrote a petition for writ of certiorari submitted to the U.S. Supreme Court; was a member of the Virginia Law Review Editorial Board and articles editor of the Virginia Journal of International Law; was president of Virginia Law Women and Common Law Grounds; was a William Minor Lile Moot Court Competition finalist and the first-place winner of the Craven Constitutional Law Moot Court Competition; and was a peer adviser, a member of The Raven Society, co-head writer for the Libel Show and a winner of the Ritter Prize, which honors character and integrity.

She will clerk for Judge William B. Shubb of the Eastern District of California after graduation.

Burchard said she is a different person today than when she entered law school.

As a first-year law student, she and her other female classmates made a pact to overcome nervousness about classroom participation. They had to speak at least once a week in each class, or face reminders from the other women.

“That really revolutionized a lot of our legal educations,” she said.

As she felt more confident, she became a recognized voice among the student body on Twitter, commenting on both #AppellateTwitter issues and #UVALaw news.

In attempting to find her voice in law school, she looked to role models such as professors Kimberly Ferzan and Deborah Hellman and Vice Dean Leslie Kendrick.

“I’m leaving with a sense of confidence that I didn’t have when I stepped into the building,” Burchard said. “I’m not from a very elite background, and I hadn’t had some of the life experiences or educational experiences some of my classmates had had. My first year, I really struggled with imposter syndrome. I felt as though I didn’t belong at the University, or in the legal profession.

“Since then, I’ve realized that those initial insecurities were unfounded. I found classmates and professors who encouraged me and guided me when I most needed direction, and who reminded me of the value of persistence and resilience. I’ve learned how much hard work matters, and what a difference it can make.

“Above all, my experiences here helped me realize that I can’t afford to be a passive actor. They’ve given me a greater sense of responsibility to society, and the confidence to undertake the task.”

What’s the True Story of Brooks Hall? This Architectural Historian Has the Answer END_OF_DOCUMENT_TOKEN_TO_BE_REPLACED

At UVA, There Is a Club for Everyone END_OF_DOCUMENT_TOKEN_TO_BE_REPLACED