Class of 2019: This ROTC Cadet Runs Toward Challenges 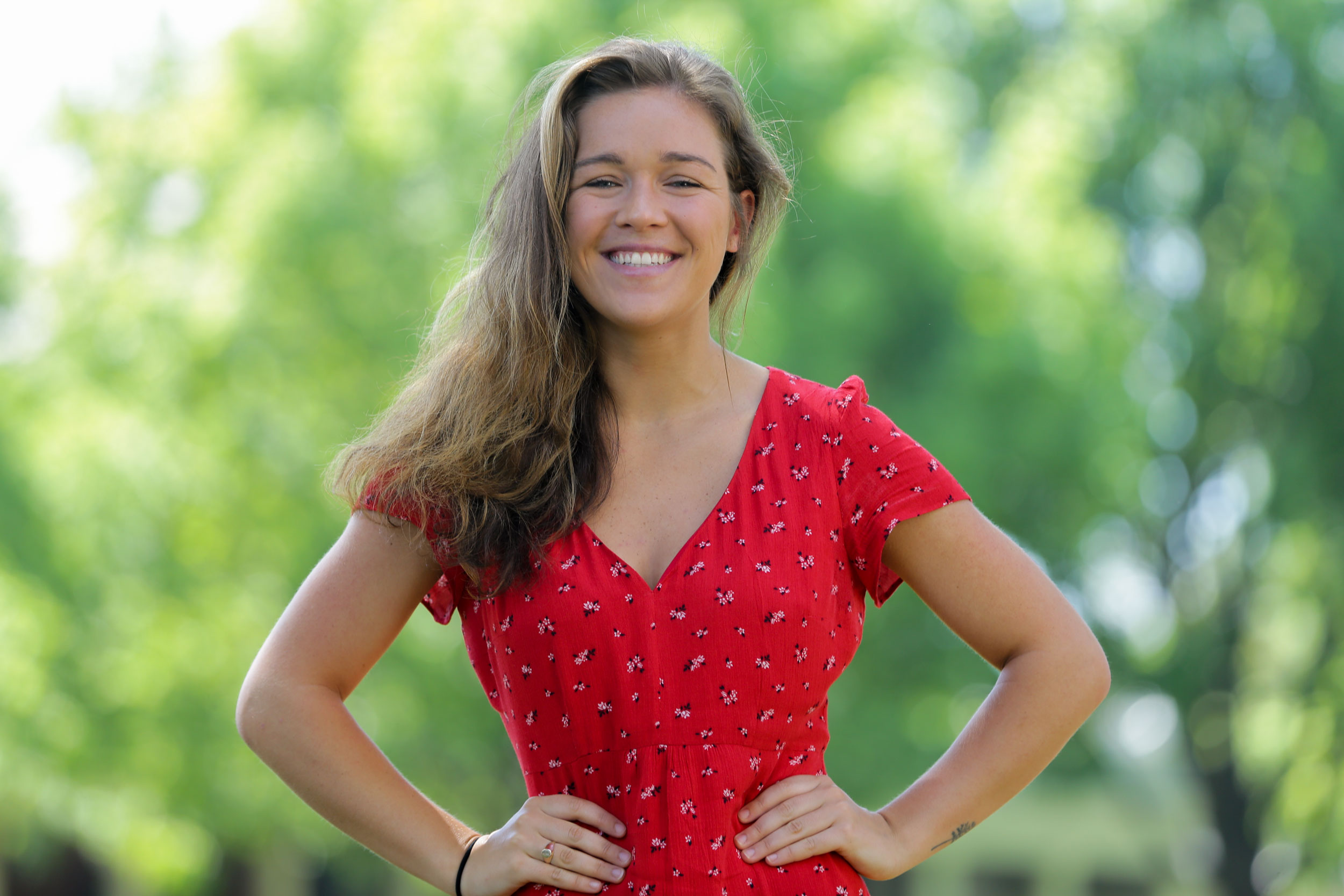 Maggie Mulry looks back on her last three years at UVA and in ROTC as both challenging and rewarding. (Photo by Shannon Reres, University Communications)

With her 5-foot-10, athletic build, University of Virginia fourth-year student Maggie Mulry laughingly describes herself as an “imposing lady.”

It’s hard to disagree. Mulry carries herself with a striking poise and confidence that belies her age. But on a sunny day in May, 10 days out from Final Exercises, her imposing presence is tempered by long hair, a floral sundress and pair of scuffed Chucks, giving the impression that she is like any other fourth-year student reveling in her last days on Grounds and preparing for what’s next.

Talented and driven, Mulry is like many of her classmates. But her “what’s next” looks a little different. On Friday, she will receive a commission as a second lieutenant in the U.S. Army, with an assignment to serve as a field artillery officer. And in November, after a summer she plans to spend teaching herself either Arabic or Russian, she will ship out to Fort Sill, Oklahoma, for an 18-week Basic Officer Leader Course.

For Mulry, who has spent every day for the last three years pursuing this goal, this moment feels surreal.

“There’s so much history and respect and love surrounding the military – now that I’m officially going to be a part of it, I think it’s sometimes daunting – but I’m really excited for it.”

“I’m 10 days away from commissioning into the U.S. Army. Even saying that out loud is crazy to me,” she said. “There’s so much history and respect and love surrounding the military – now that I’m officially going to be a part of it, I think it’s sometimes daunting – but I’m really excited for it.”

How It All Started

It’s difficult for Mulry to pin the precise moment she realized she wanted to serve in the military. But when asked to guess, she cites somewhere between her last year of high school and first year of college.

“I applied to UVA but didn’t get in my first year, so I did a year at community college, and that was a real eye-opener,” Mulry said. “I reevaluated what I wanted to study and what I really wanted to do.”

One of the things Mulry remembers from this experience is how much she missed playing team sports. She had played field hockey and lacrosse for most of her life and, in their absence, really missed being part of a team.

When Mulry mentioned this to her English teacher, a veteran, he urged her to consider serving in the military.

“That put the idea in my head,” she said. But it was through her own research – along with the encouragement from friends and family – that she realized she wanted to serve as an officer in the U.S. Army.

As the daughter of a Wahoo, Mulry still had her sights set on attending UVA. After reapplying – and getting accepted this time – she enrolled as a second-year student in the fall of 2016, with the goal of joining the Army ROTC program.

“I didn’t have [an ROTC] scholarship coming in because I didn’t apply out of high school,” she said. “I was in this weird limbo where I was like, ‘I know I want to do ROTC. I’ll do it without the money.’ I really, truly just wanted to be in the program.”

Itching to begin, Mulry emailed the program, saying she wanted to sign the papers as soon as possible – even if that meant doing so without a scholarship. Unbeknownst to her, a scholarship packet was already in the mail and would arrive two days later. Even still, this moment, along with many others, typifies Mulry’s dauntless, never-back-down attitude.

To catch up, Mulry had to collapse her first and second years of ROTC into one, learning about Army history, values, ranks, uniforms and leadership at twice the speed of her fellow cadets.

Looking back, she remembers that year as a challenge.

“I have an amazing class of peers – in my opinion one of the best classes that UVA Army ROTC has had in a really long time. We have a ton of distinguished military graduates; we have Lawn students; we have kids with 4.0 GPAs; we have senior RAs; we have really strong, natural leaders in our class, and we’re super-lucky for that, and I think the program is lucky for that,” Mulry said. “But I was sort of thrust into [everything] with kids that had now been here for a year – a ton of whom had a military history in their families and had fathers who were high [ranking] officers or high [ranking] enlisted – and they were so confident in themselves and what they were doing.”

“I needed to be doing what she did. She was such a perfect example of exactly who I want to be as a female in the military. She was awesome. That was the day I decided I needed to do field artillery.”

By her third year, Mulry was caught up academically– and feeling much more comfortable in her own skin.

The first three years of the Army ROTC program build toward a single, monthlong training event called “Advanced Camp” that takes place in the summer between junior and senior years of college. This course – which tests the mental and physical proficiency of cadets and their potential to serve as commissioned officers – is not only a prerequisite for commissioning, but also one of the many metrics that ultimately defines a cadet’s future branch of service.

While most of Advanced Camp consists of light infantry tactics and tiered training – in Mulry’s words, “You are in the woods the whole time, doing battle drills and all the stuff you’ve practiced for those first three years [of ROTC]” – cadets get a brief respite on “Branch Day” to talk to officers from every branch of the Army.

Going into Advanced Camp, Mulry was set on going into the armor branch of service. But an encounter on Branch Day changed her mind.

“We have no field artillery officers at UVA; I had never really heard of field artillery before. I knew it was a thing, but I didn’t really know that much about it. And I walked in there and the officer who was talking was the only female officer in the entire Branch Day, and that immediately caught my eye,” Mulry said. “She was tough, she went to West Point, she was like, ‘I got a higher PT score than all the dudes in my platoon …’

“She was exactly what I wanted to be. And I changed my preference that day. I needed to be doing what she did. She was such a perfect example of exactly who I want to be as a female in the military. She was awesome. That was the day I decided I needed to do field artillery.”

As Mulry reflects on the last three years, she admits they have been far from easy.

“I love ROTC and I’ve loved being in ROTC. But it also at times can be frustrating when you’re waking up at 5 a.m. to walk around Grounds with a 45-pound backpack on,” she said. “You’re lying there, thinking about how your friends are going out, and how for [so many of your fellow classmates] the main thing that they’re focusing on is tests for the academic realm. And you’re studying for something that is going to be so important for not just yourself, but for your peers and also the country, when you graduate. And there’s a lot of pressure in that.”

“You’re studying for something that is going to be so important for not just yourself, but for your peers and also the country, when you graduate. And there’s a lot of pressure in that.”

The path Mulry has chosen is one of immense responsibility. But looking ahead, as she prepares to both receive her commission and walk the Lawn, she recognizes that her time at UVA and in ROTC has prepared her for this responsibility.

“Maggie has exactly what it takes to excel in combat arms,” said U.S. Army Maj. Kathryn Hillegass, who serves as an assistant professor of military science at UVA and will administer Mulry’s oath of office at commissioning exercises. “She’s tough as nails, has a sharp sense of humor and never doubts herself. When you throw a 50-pound ruck on a cadet, some people struggle to keep up. Not Maggie. The heavier the ruck, the faster she moves. She has the hunger to lead, and she is the type of person people naturally want to follow.”

Mulry said she feels like a different person than she was when she started the program. “I was not outspoken, I was not extroverted, I was not any of the things that I am now,” she said. “Maybe I was because that’s what people were seeing in me, but I didn’t see it in myself. And now I’m totally confident in saying that I think I have those qualities and I think I’m going to bring those to the table when I go into the Army.”

Who Mulry was three years ago – or the degree to which she has changed in the interim – is beside the point. Mulry has worked hard. And on May 17, so much of that work will pay off.