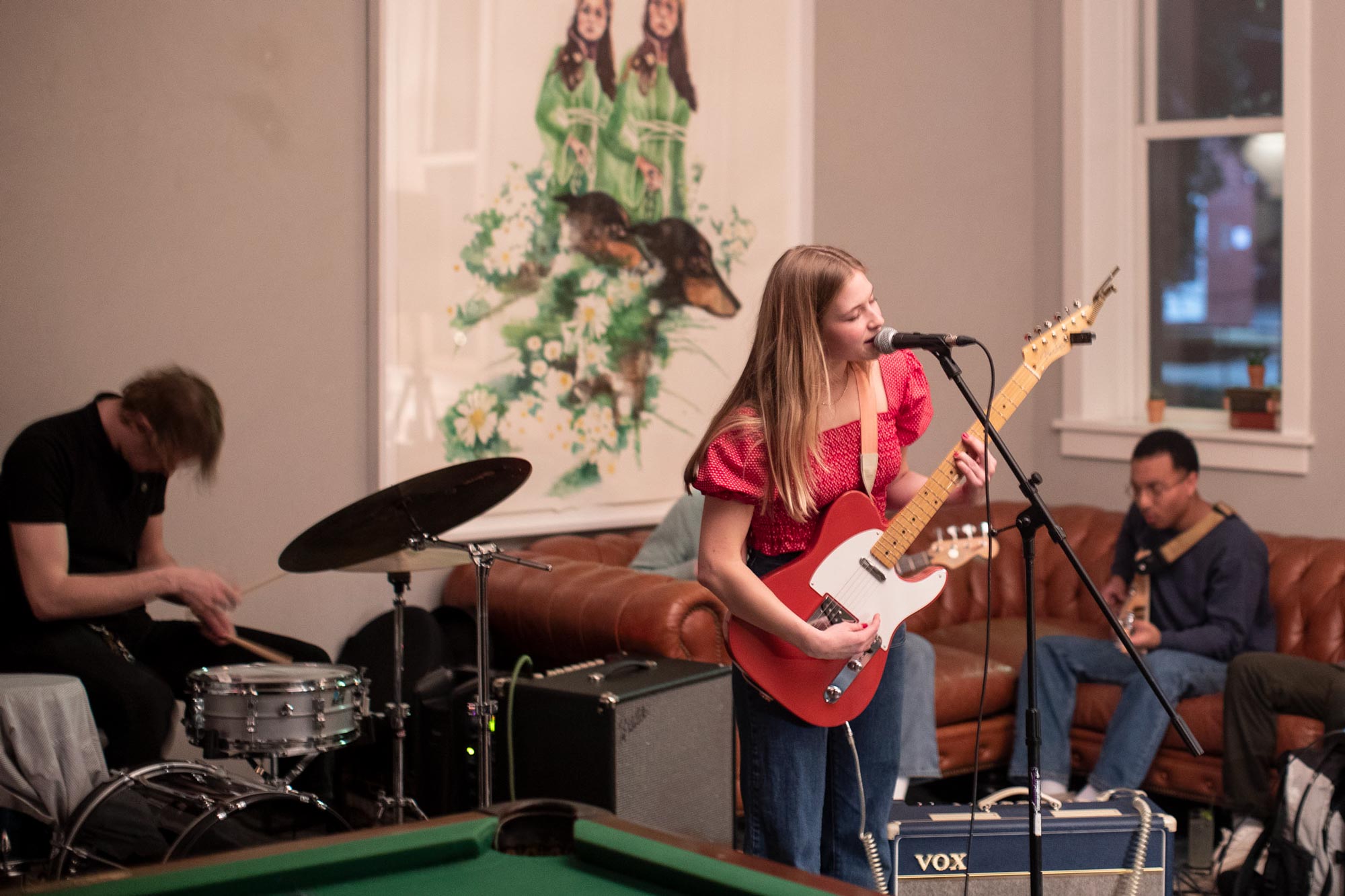 It would be easy to argue that Kate Bollinger has spent her entire life on the path toward a career in music, but it took 20 years for her to convince herself of that.

With a musical therapist for a mother and two older brothers who played in bands and practiced in the family’s basement, she grew up immersed in, and enamored of, music – but never pressured to pursue it.

“I have a lot of memories of singing in the ocean when my family went to the beach,” she said. “I would make up little songs.”

While childhood piano and violin lessons never took root, Bollinger never stopped writing and singing, eventually playing local shows in Charlottesville, her hometown, and releasing self-recorded songs on SoundCloud. But things never felt serious until her second year at the University of Virginia, when she began making music with classmate (and now bandmate and producer) John Trainum.

Trainum, who also works with local hip hop artists, was introduced to Bollinger by a mutual friend who was urging them to collaborate. The two hit it off and recorded some guitar and vocal tracks. “We decided kind of randomly to put them on Spotify just for fun and some people listened, but nothing major happened,” she said.

Still, they were encouraged. After studying abroad in Lyon, France, for six weeks after her second year, Bollinger resumed writing with Trainum. He produced a beat for her to write to and the resulting 2018 song, “do u go out together?” took off on Spotify and YouTube. 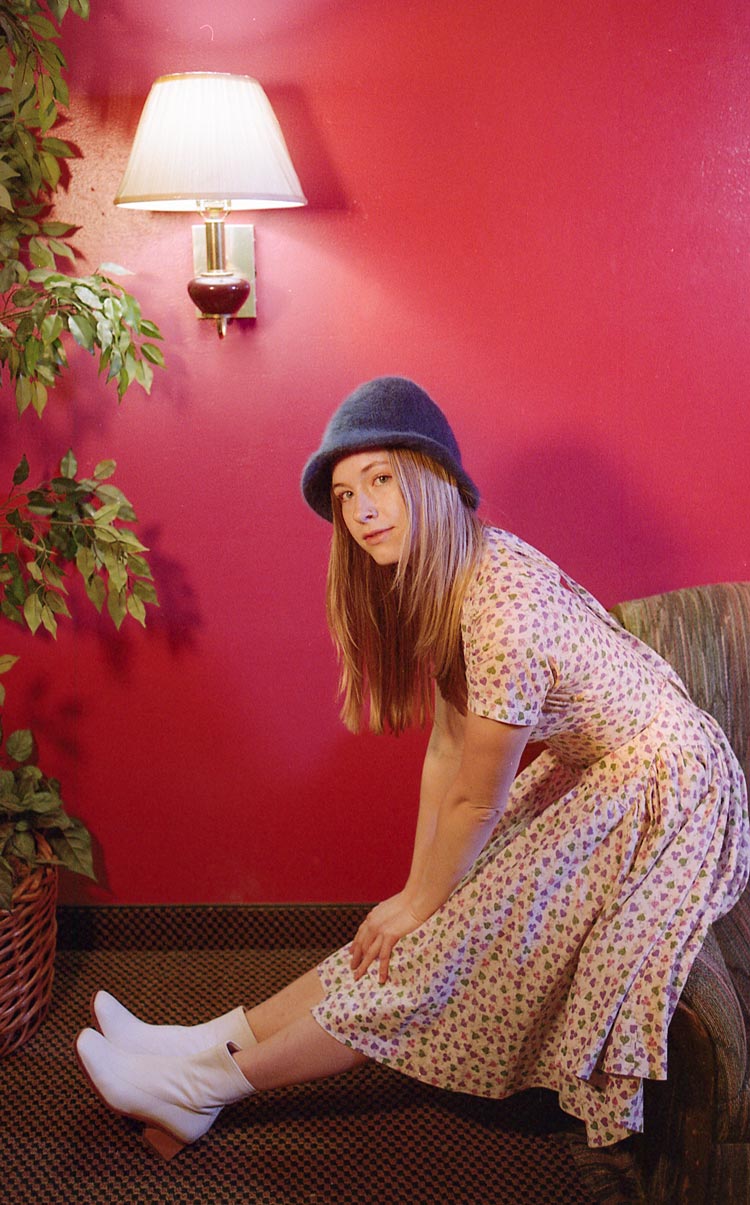 While a student at UVA, Bollinger released a string of successful singles and an EP, went on multiple tours and received publicity from The New York Times. (Photo by Michael DeCristo)

“I think that’s when it started to feel like maybe it was something I could do,” Bollinger said. “For a while, I was trying to avoid music as my career. I never thought it was really realistic. It’s been something I’ve always wanted to do, but I know how fickle the music industry can be, so it always felt like something that was be too good to be true.”

Now, Bollinger, 22, a Miller Arts Scholar who is graduating this month with a bachelor’s degree in studio art with a concentration in cinematography, is well on her way to success and planning to focus on her music full-time.

In the two years since those early sessions with Trainum, she’s formed a band, released a string of successful singles and an EP, and gone on multiple tours, including one in which she opened for popular indie band Wild Nothing. Her music has been featured on Spotify playlists like “Fresh Finds” and she’s even received publicity from The New York Times.

“That was really crazy,” she said of the blurb in The Times. “I was in New York for a show staying with a friend’s uncle and he came across it while he was reading the paper and was like, ‘Huh, I think that’s who’s staying with me.’”

This summer, Bollinger will move to Richmond, joining her bandmates, most of whom are current or former Virginia Commonwealth University jazz students. The group’s sound is a soft collision of indie pop and smooth jazz. The result is, for lack of a better word, cozy – the soundtrack to a sun-drenched summer Sunday afternoon spent lazing on a lawn (or THE Lawn).

The key to it all, of course, is Bollinger, whose soulful voice – sometimes barely more than a whisper – is the perfect complement to her introspective and (literally) dreamy lyrics.

“I’ve been writing down my dreams for the past four or five years, so I have a lot of songs that are based on dreams,” she said. “It’s weird writing songs – it’s kind of subconscious experience. I never try to write about something; it just kind of happens, I guess.”

Did you catch our session with Kate Bollinger (@katebsongs) yesterday?

If not, you can watch it here: https://t.co/8IXUfIlulL

The attention to lyrical detail and imagery makes sense considering that until last year, Bollinger’s focus at UVA was on poetry.

After teaching her in an upper-level poetry workshop, English professor and director of creative writing Lisa Russ Spaar was so impressed by Bollinger’s talent that she recruited her for the Area Program in Poetry Writing, a competitive track within the English major.

“To me, Kate’s music is like her poetry – ethereal and atmospheric – sometimes a little trancy, but with an edge,” Spaar said. “When I listen to her songs, I hear her voice not only in the ether of the sonic lushness, but in her lyrics, as well, which pay rich attention to detail, ask questions, evince a guarded nostalgia and a prescient awareness of the world.”

Ultimately, Bollinger felt the need to refocus as she devoted an increasing amount of her creative energy to her songwriting.

“I loved the poetry program, but I felt like I was trying to do music all the time and also trying to write poetry and I was pulling from the same place for them both,” she explained.

After one film class with renowned art professor Kevin Everson, her mind was made up, and she opted for concentrating in cinematography.

“I felt like it wouldn’t take away from my energy that I put toward music, but would complement it because I could eventually make music videos and visuals,” she said. “Kevin has been really supportive. Whenever I had to miss class to play shows, he’d be like, ‘Go make art! Go make art!’”

For his part, Everson is a huge fan of Bollinger’s, both personally and professionally.

“Kate’s a big-time talent, for sure. She’s a great filmmaker and a good student,” he said, adding that he recently saw her perform at The Southern in downtown Charlottesville and was blown away. “I was just kind of shocked. I got a bunch of her music. When I jog, I always play Kate. She’s great for a jog.”

Everson said he’s also been impressed by Bollinger’s humility as she’s begun attracting attention, recalling that she wrote a song for his course that the students then used to shoot a music video.

“To her credit, she kind of lay back in the background,” he said. “She’s not a diva or anything like that. She’s just part of the community here.”

Bollinger and her band were on tour and headed to play the South by Southwest festival in Austin, Texas, for a third time when the COVID-19 pandemic cut things short. She then returned home to Charlottesville to finish her final semester virtually.

It’s made for a bittersweet ending to her time at UVA, a school she was once reluctant to attend.

“My dad went here and he really, really wanted me to go – and that kind of made me not want to. But in the end, I realized I really did want to go here, and the only reason I wasn’t was because I was trying to be rebellious,” she said with a laugh. “I’m really glad I did.”

While excited to focus on her music, with another EP due out this summer, Bollinger will miss the UVA experience, and the arts community in particular.

“Miller Arts has been one of the best parts of UVA for me,” she said. “It’s been really cool to be in a community of artists and to have people believe in your projects.”

In addition to meeting and working with Trainum, and seeing her music take flight, Bollinger said she’ll leave with many great memories, like an impromptu Christmas caroling adventure with fellow students on a snowy night.

“These three carolers picked me up on the way to John’s house. One of them had a really janky trumpet and I had to stop at like every house to carol with them,” she said, laughing and adding that a jug of a seasonal mystery beverage might have been involved.

Bollinger is, however, looking forward to putting the balancing act between music and academics behind her, although it was a valuable exercise balancing practices, touring, songwriting and promotion with her schoolwork.

“Sometimes it felt impossible, but I’m easily distracted and not naturally very organized, so I’ve just had to teach myself to be a lot more organized than I want to be,” she said.

As for the future, she’s nothing but energized, despite her initial reservations.

“I’m just excited to be able to focus on music full-time, write better songs, put more thought into my projects, she said.

And when she does have doubts, Bollinger thinks of the fans she’s already connected with, recalling the girl who flew from Canada to see her play in New York and the guy who drove from West Palm Beach, Florida, to see her play in Savannah, Georgia.

“Those kinds of things make doing music feel a little bit less self-centered, which sometimes gets to me,” she said. “Making music can be such a self-serving, solitary activity, so to know that you’re affecting other people, too, is special.”