Class of 2020: Random Connection Brought This Californian to UVA 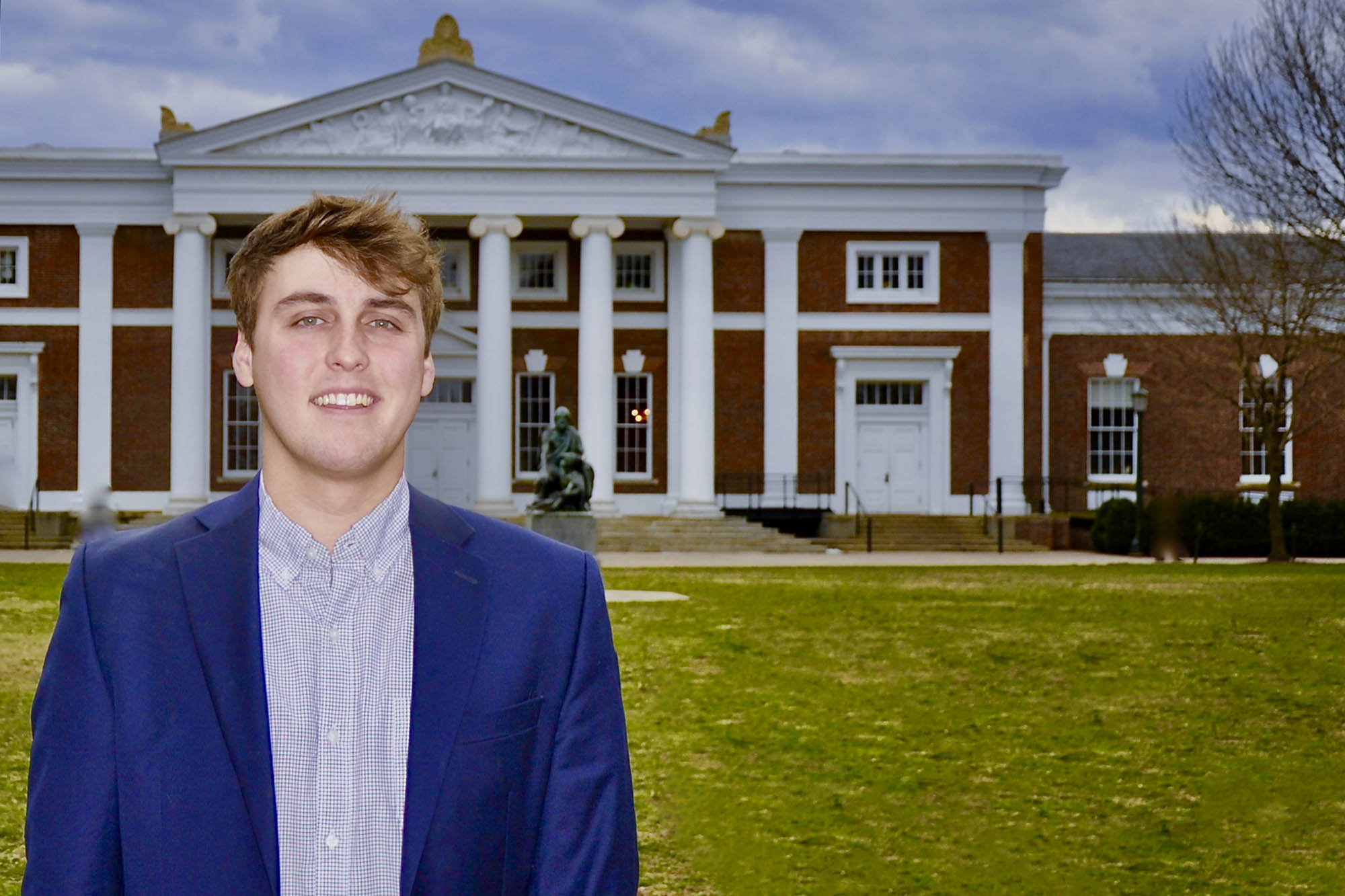 Matt Sonnenblick says of one the most fulfilling things about his time at UVA has been working with members of the Charlottesville community. (Contributed photo)

When Los Angeles native Matt Sonnenblick was applying to colleges, the University of Virginia – 2,500 miles away – wasn’t on his radar.

But, as luck – and a random connection – would have it, the college counselor at his high school was knowledgeable not only about UVA, but the city of Charlottesville.

One of the counselor’s ancestors had started what is now Tavern & Grocery – known historically as Inge’s Grocery – on West Main Street.

“She said, ‘You have to check this school out,’” Sonnenblick recalled.

“I had the chance to come and visit during a weekend in the spring of my senior year and just really enjoyed myself and felt like I could see myself going there. As luck would have it, I got in, and things kind of just went from there.”

Sonnenblick, a Jefferson Scholar and Echols Scholar who will graduate Saturday from UVA’s McIntire School of Commerce, has left his mark on Charlottesville through his work with Student Entrepreneurs for Economic Development and the Community Honor Fund, a student-run micro-lending organization.

“When I chose UVA, I was obviously thinking most about the University and all the cool things to do within the University,” said Sonnenblick, speaking from his home in Manhattan Beach, California, “but I think that was probably the great, happy surprise of my four years – how much I loved Charlottesville as a city, being able to work with people in Charlottesville.

“I just think it’s a fantastic city and I definitely hope I have the chance to go back.”

UVA Today caught up with Sonnenblick, who will start a job at Altamont Capital Partners, a private equity firm in San Francisco, in August.

Q.  Before you got to UVA, you invented a math module that is still being used to teach children in the inner city. Can you tell us a little bit more about that?

A. The math program was part of a project I put together called “Add on Math.” I had volunteered in an elementary school in L.A. for a couple years and was tutoring math in the third and fourth grades, but I was noticing that I was tutoring the same kids on the same math tables every week. I was trying to teach multiplication tables, but the students didn’t have a strong foundation in addition and subtraction, so they were far behind California’s Common Core standards.

I thought that I could best help by trying to reintroduce math fundamentals into the classroom, so I worked with the head of the math department at my high school, my school’s community service director, and a couple other students to put together a weekly math program to teach basic math fundamentals that a lot of kids were missing. We developed the program during my junior year and then implemented it during my senior year and found some success in raising student math test scores. I then passed the program off to two juniors who had volunteered with me that year for them to continue the program. 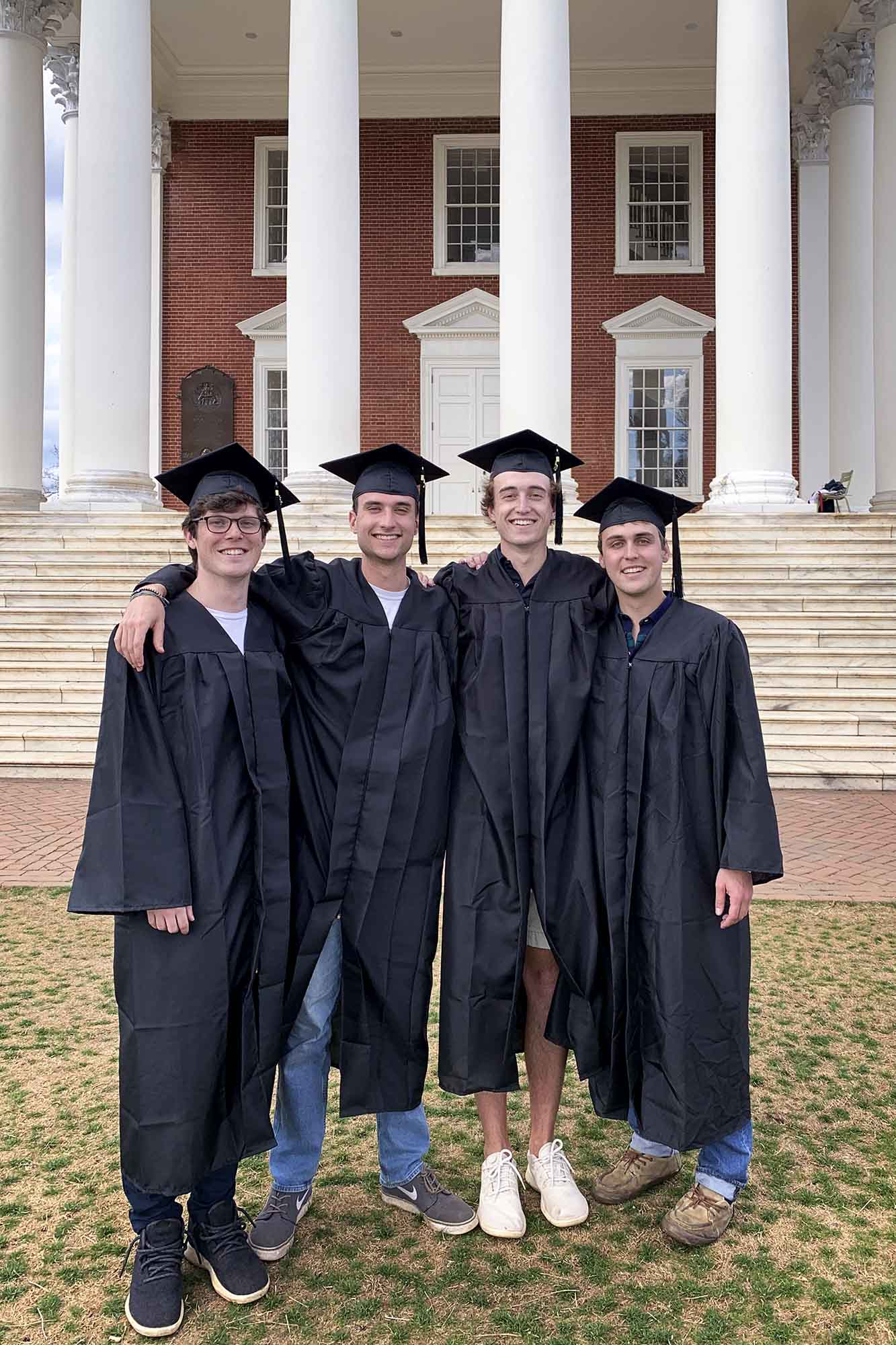 Q. What has being a Jefferson Scholar meant to you?

A. To me, being a Jefferson Scholar has really been a great opportunity for me to take responsibility and initiative into my own hands. I think it really set me up to take advantage of opportunities that wouldn’t necessarily have been there otherwise. It was a great way for me to kind of strike out on my own and be a little more independent, in the sense that I’ve had the chance to explore. It was just a fantastic opportunity to kind of take advantage of my four years in school to the best of my ability and not have many restrictions – to be able to branch out on my own a little bit and take those first steps toward full independence.

Q. Can you tell us about the Community Honor Fund and how you got involved with it?

A. The fund was started about a year before I got to UVA. A fourth-year at the time kind of struck up a friendship with one of the workers at a market in [the Observatory Hill dining facility]. This person who was working there had run into a couple unexpected bills that had come up that he wasn’t going to be able to pay and he was worried what he was going to do.

His only option at that time was to go to a payday lender to get the money to meet his short-term needs, and the fourth-year was kind of thinking about the cycle of debt that is often created by payday lenders. You can get into shocking amounts of debt off of pretty low initial principal borrowing.

So the idea was to come up for a new model of lending where you can lend into these lower-income, higher-credit-risk communities, but instead of charging high interest rates, if you build more of a relationship with the client, then you could be more flexible in meeting their needs and provide more services beyond the loan itself – like financial literacy and helping them pay off bills. The relationship could be built more off of trust and an in-person human relationship and you could stop that cycle of debt.

When I joined my first year, it was because there was an older Jefferson Scholar who was very involved. He reached out to me … and it was just a really cool way to feel like we were helping people in the broader Charlottesville community, outside of UVA. You learn a lot about how seemingly random events can have pretty large impacts on people’s lives, and how small interventions can make a big difference.

Unfortunately, since the big part of our lending platform is meeting with clients and trying to get to know them better and building relationships, we’ve had to put things on a hold a bit since none of the students are in Charlottesville now. But hopefully it will be able to start up again in earnest in the fall.

Q. When you look back on your UVA experience years from now, what do you think you’ll remember most?

A. A huge highlight is going to be the March Madness run last year – being outside Boylan [Heights] after the Elite Eight victory and throwing a newlywed bride into the air … and then I went to [the Final Four in] Minneapolis with my best friends and met up with some recently graduated friends from Chicago. That was just amazing to be there when that all happened.

But in general, any time I was just able to sit on the Lawn with some of my best friends on a beautiful spring day, that’s something I’ll always remember. That’s actually the last thing that I did before I unfortunately had to come home in March. We sat on the Lawn in our caps and gowns that we had pulled out to take a couple of early graduation pictures. We were just playing music, sitting in the rocking chairs … That will stay with me.