Class of 2020: Shifting from Medicine to Engineering, Student Finds He Enjoys Teaching 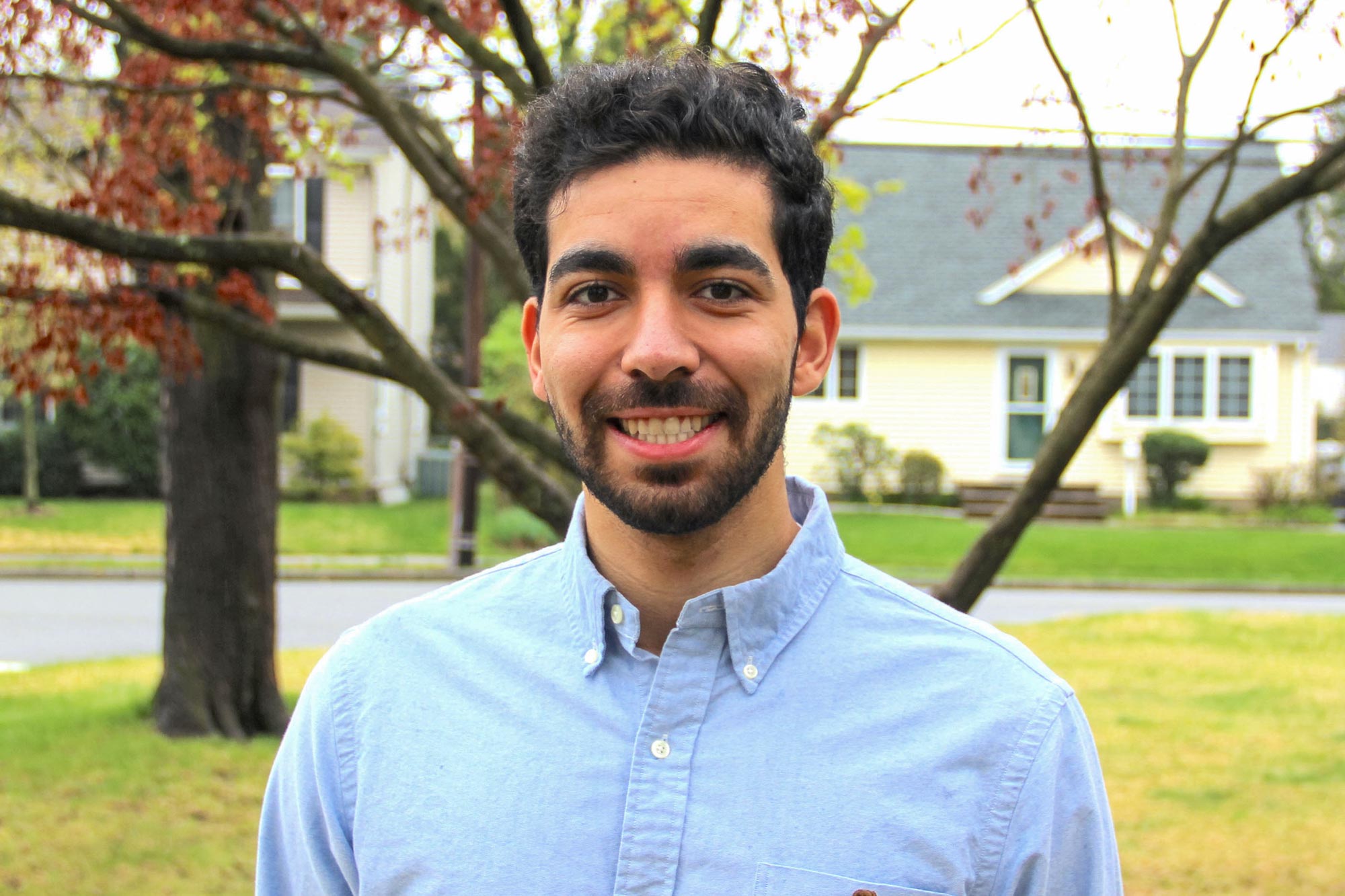 “I did not get an opportunity to say a proper goodbye,” said fourth-year Daniel Ayoub of the University’s abrupt shift to online classes in March. “But I am still positive.” (Contributed photo)

Daniel Ayoub entered the University of Virginia a student and left a teacher.

The River Vale, New Jersey, native, who will graduate in May with a dual major in electrical engineering and computer engineering, with a minor in mathematics, designed his own one-credit course as an introduction to engineering and has kept it going as the University has shifted over to online classes.

“That quickly humbled me and showed me that I can’t just explain things quickly,” he said. “Presenting the material became a creative process with me to think about, and that ended up being a challenge or a puzzle, especially at the beginning. But seeing students who were discouraged about the material begin to understand it and have an appreciation for the course, that was very meaningful to me.”

In his final semester, Ayoub tried his hand at his own student-taught course with “An Undergrad’s Guide to Electrical Engineering,” a one-credit, pass-fail, quick overview of electrical engineering.

“I wanted to have a course that wasn’t super critical in math and calculus, but that emphasized a lot of the concepts behind some of the things that we do,” Ayoub said. “And I wanted to give aspiring engineers and non-engineers an appreciation for what electrical engineers do.”

The group of 37 students met once a week in person and now continues to meet once a week online. Ayoub said it was important to continue the course, even after the COVID-19 pandemic forced all of UVA’s courses online in March.

“I felt some of the students were really benefiting from it or really enjoying our weekly discussions, so I continued for their sake as well as for the first-year students who were still deciding their majors.” Ayoub said. “I am happy to say that was the better decision. I would have really been disappointed had I just quit or not been able to do it.”

Continuing the course, for which he makes all the notes available to the students, also gives him a connection to what would have been a normal semester for him.

“Like my friends, I did not get an opportunity to say a proper goodbye,” he said. “You leave for spring break and think that one week later, things will return to normal, and I haven’t returned. But I am still positive.”

Ayoub was very much part of his University community, taking advantage of the opportunities he had, in and out of the classroom.

He came to UVA planning to be a doctor, but was lured away by the temptations of mathematics and physics.

“I was first set on pre-med and becoming a doctor,” Ayoub said. “I was an EMT in high school and I really, really enjoyed it. I initially declared biomedical engineering, but felt that I wasn’t getting enough math or physics or computer science. I knew a career as a medical professional wouldn’t really give me that.”

“Then I realized at the end of my second year I liked the electrical engineering side of things a lot more,” he said. “I declared the double major, and thankfully UVA had a really cool program where there was a lot of overlap between the two majors and I could make them work. I even had time to do a minor in applied mathematics.”

Robert Weikle, a professor in the Charles L. Brown Department of Electrical and Computer Engineering, from whom Ayoub took three courses, said Ayoub was a pleasure to teach.

“One of the things I appreciated most about him was that he thought deeply about concepts being discussed in class and would challenge me, as a teacher, with very thoughtful and pointed questions,” he said. “It not only revealed him to be, intellectually, an outstanding student, but also pushed me to be a better teacher.”

Weikle said Ayoub also has a tremendous sense of humor, as well as very positive attitude and energy.

“It made being around him always enjoyable, whether in class, office hours or socially at student-faculty get-togethers,” he said. “He always smiled in class and seemed to love absorbing new ideas and discussing their implications. He’s the kind of student who reinforces and reminds me of the reasons I chose an academic career to begin with.”

Ayoub, who graduated at the top of his class from Pascack Valley High School, came to UVA after applying to a dozen other schools. Accepted at UVA, Ayoub visited for Days on the Lawn and was impressed by the beauty of the Grounds.

“I found that the work-life balance in the Engineering School was a lot better than at some other technical and engineering schools,” he said. “I really enjoyed that I could be an engineer and also make friends in the philosophy department or the religious studies department or the biology department and there was a very interdisciplinary feeling to the whole school.”

Ayoub participated in that balance while he was an editor of The Oculus, the undergraduate research publication, which he enjoyed because it exposed him to research being done all around Grounds, and not just in engineering.

“I learned how to read papers and make them better, how to give feedback in way that is constructive,” he said.

Then he stepped up to a vice chair position on the Undergraduate Research Network, where he served for a year, working on events such as the Spring Symposium and the Fall Research Fair. He worked at promoting the group on Grounds and building camaraderie among members.

“I developed some valuable leadership skills,” he said.

He also broadened his horizons by joining the Jefferson Literary and Debating Society.

“That was a tremendous experience,” he said. “It was something that took me outside of engineering and really allowed me to discover new fields, such as political science and philosophy – things I would never have been exposed to had it not been for some of those students and their passions for these subjects. I began picking up books on my own time and reading.”

“He was always joyful when he came into the meetings and had a lot of ‘good energy,’” Cullaty said. “He was an idea guy and always proposing new things for URN. I really liked talking with Daniel, as he always had interesting things to say. It was clear he was a ‘can-do’ student. Classic engineer – he saw a problem and got to work thinking on how to fix it, which he usually could.”

Ayoub also worked as a team member on an electrical engineering group doing fiber optics technologies and photonics research with professor Andreas Beling during a summer. A NanoStar undergraduate research stipend recipient, Ayoub was the sole undergrad in on graduate student team.

“I began shadowing a graduate student and helped with measurements they were doing,” he said. “At the end of that summer, we presented a poster at the department’s poster presentation and I was added to a paper because I helped them conduct those measurements.”

He will get more research opportunities after graduation, having accepted a position at the Johns Hopkins Applied Physics laboratory, working with a research and development group in electrical engineering.

“It is just a stone’s throw away from academia and I thought that was a tremendous opportunity,” he said. “Ultimately, I would love go back to teaching and becoming involved in university life, because I like the pursuit of knowledge.”

A recipient of a Tau Beta Pi Scholarship, a NanoStar undergraduate stipend and Intermediate Honors, Ayoub is also a member of The Raven Society; Tau Beti Pi; and Eta Kappa Nu, the student honor society of the Institute of Electrical and Electronics Engineers. He has also belonged to E-Guides, the Engineering School student tour service, and the Coptic Orthodox Christian Association.

His UVA experience has left an indelible mark on him.

“I came to UVA with a really open mind,” he said. “I learned that to really discover interests and passions, I have to take the opportunities that are presented to me. I can’t be stubborn or dismiss something on the assumption that I don’t like it or won’t like it.

“I learned to make the best out of UVA and my college experience, to try new things and really step out of the Engineering School in a variety of ways. I need to have this interdisciplinary approach or else I miss out on learning.”

Ayoub said there were things he feels he and his classmates are missing by being away from Grounds.

“I wanted to take pictures with my friends at graduation, and I am bummed about that,” he said. “Am I ever going to get the chance to take pictures in my cap and gown, and go to some of those dinners for fourth-years? I wanted to be among my friends and have classes in person. Nothing can really replace that, but I do think the University is trying its best with the online classes. I really don’t have a choice, so I am thankful we are still able to continue instruction, especially for me and my own students.”

How a Single Email Changed a Life END_OF_DOCUMENT_TOKEN_TO_BE_REPLACED

Fall Is in the Air on Grounds END_OF_DOCUMENT_TOKEN_TO_BE_REPLACED

At UVA, There Is a Club for Everyone END_OF_DOCUMENT_TOKEN_TO_BE_REPLACED