Class of 2022: Luis Jerez Has Learned, and Led, by Example 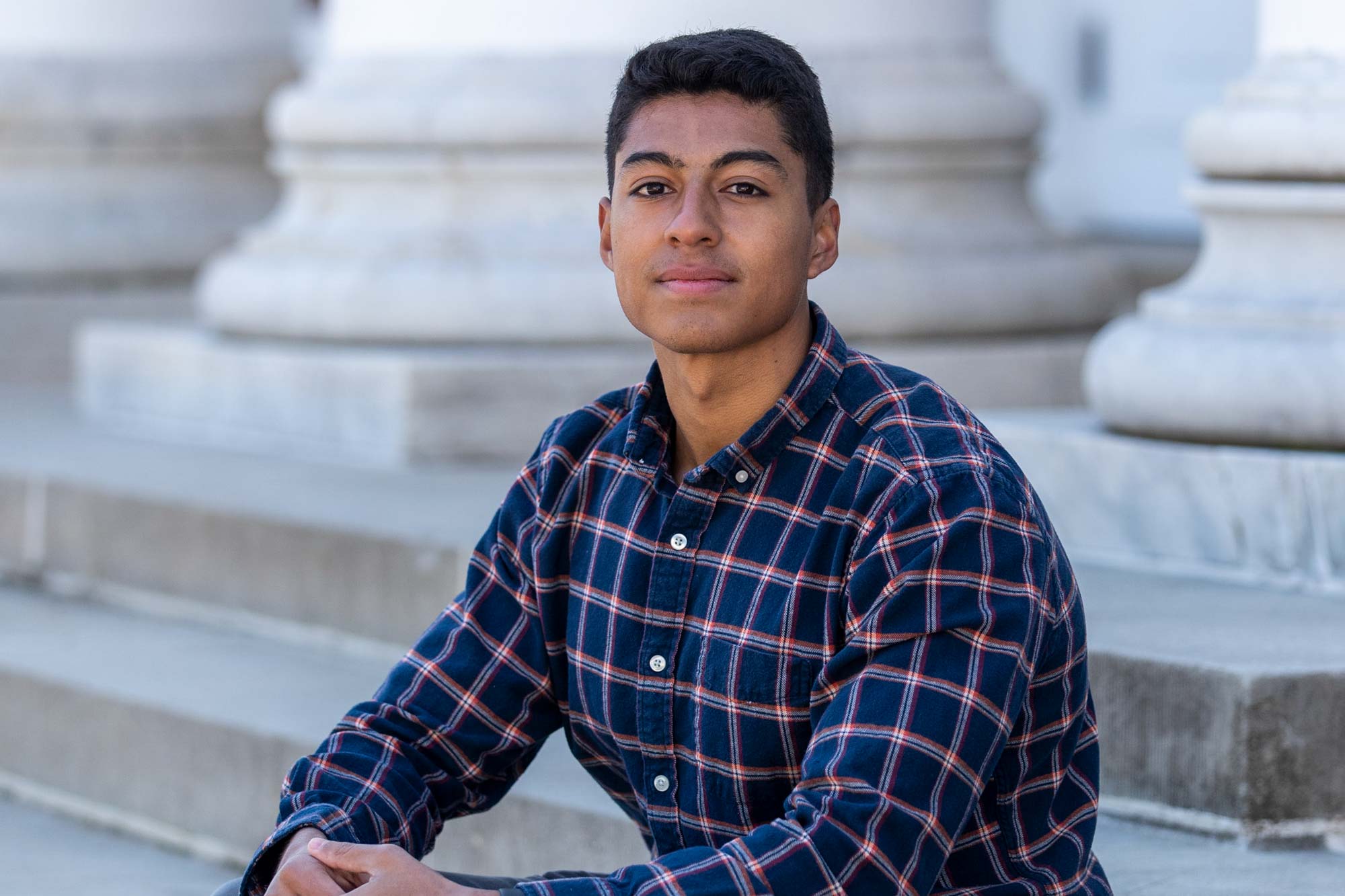 Luis Jerez learned the value of mentors early in the McIntire School’s Commerce Cohorts program and later became one himself. (Photos by Erin Edgerton, University Communications)

Simply put, people are impressed by Luis Jerez, who is already among an impressive cohort of students graduating from the University of Virginia on May 22.

McIntire School of Commerce Professor Jeffrey Lovelace didn’t mince words, calling Jerez “one of those students whom you hope you will be lucky enough to get the chance to interact with as a professor.”

Lovelace found Jerez to be among the most intelligent and engaging people he has ever taught at the University. In the classroom, Lovelace said, Jerez’s presence elevates the experience for everyone, and outside of it, the student has demonstrated that he’s a “a true leader of character.”

That high praise for the Roanoke product comes well-deserved as Jerez, a commerce major who concentrated in management and information technology, has dedicated himself to the advancement of others.

Having been part of McIntire’s inaugural Commerce Cohort, a program launched in 2018 to support high-achieving, high-need first-year students with academic mentorship, career preparation and personal development, Jerez and his cohort peers now represent the first crop of participants to graduate from McIntire and other schools across UVA.

Having had the opportunity to get a taste of the Commerce School’s culture by making connections with its faculty, staff and students, he said, the cohort solidified his decision to apply to transfer into McIntire at the end of his second year.

“From the time I started high school, I knew I wanted to pursue an education related to business, and McIntire was the place I needed to be,” Jerez said. “I never considered any other program.”

He insisted that, despite that early interest in the subject matter, the cohort program played a “major role” in his academic success and professional future by supplying essential support and a few much-needed answers during his early days on Grounds.

“Being a first-generation minority student and entering such a prestigious university was tough,” he said. “I didn’t really have a clue what it was going to be like, and I didn’t have any parents or siblings to reach out to for assistance. The Comm Cohort provided me with ample resources and amazing guidance for how to adapt and excel at UVA by teaching me how to play to my strengths, build a personal brand and learn how to face adversity.”

Jerez benefited greatly from the guidance he received, including advice from Assistant Director of Undergraduate Admission Sonia Jiménez, as well as peer input from older students Alexandra Ramella and George Villacis, both 2020 McIntire graduates. All offered compelling encouragement that reminded him to believe in himself, maintain perspective and turn what he had previously seen as a weakness into a strength: his personal experiences.

“During my first two years, I would question whether I truly belonged at the University of Virginia,” he said. “My support group reminded me that I did.” 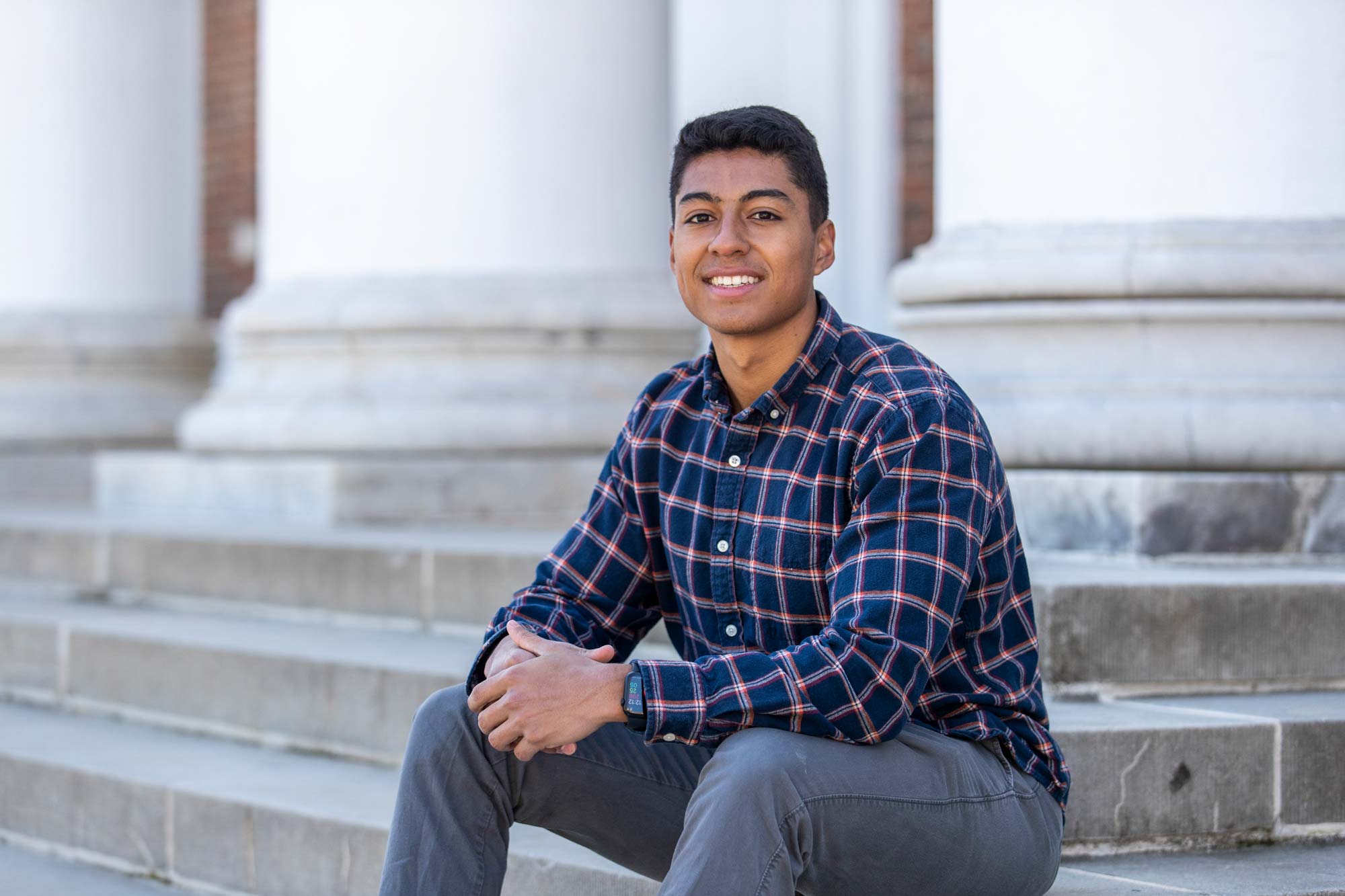 Jerez looks forward to starting his career as a management consulting associate.

Additionally, the cohort gave him avenues to develop his problem-solving skills and connect with people from a multitude of industries, such as when he represented UVA at two annual editions of the Indiana University’s National Diversity Case Competition.

Upon completing his time in the Commerce Cohort and subsequently enrolling at McIntire, he stayed involved in its mentorship program, serving as head mentor last fall.

“I took on the role because I wanted to assist other students in their academic and personal development, the same way George and Ally helped me,” Jerez said. “I realized they were asking similar questions that I had when I was in their shoes.”

He also paid back the courtesy by supplying tools for those whom he advised, helping them to trust their intuition and develop their confidence. He noted how proud he is of his former mentees, whom he now calls friends.

Commerce Professor Paul Seaborn observed that Jerez stood out for his deep involvement with the coursework, but perhaps more importantly for his determination to act as a classmate and teammate.

“Luis will be successful in his career because of his concern for and interest in others – and his ability to overcome obstacles through hard work,” Seaborn said.

It was in Seaborn’s Global Management course that Jerez realized that myriad work attitudes around the globe underscored the importance of understanding cultural difference in a business context.

“In a world that is more connected than ever, I’ve come to learn how crucial collaboration is and how diversity improves that collaborative approach to addressing organizational problems,” he said.

He explained that diverse groups statistically outperform more homogeneous ones. He saw the advantages firsthand in McIntire peer groups composed of students from different study concentrations and cultures.

As a member of the Latinx Student Network at McIntire, Jerez put his beliefs into practice, spearheading an effort to serve his peers and the local community. By establishing the “Racing Toward the End” fundraiser in the summer of 2020, he and 39 fellow student runners combined to cover 420 miles, raising money for the Advancement Project, a civil rights organization focused on policy change.

“It was very rewarding to know that I and many others could go out and find a way to make in impact for a cause that has plagued our country for so long,” he said.

And as he dedicated himself to helping others as a student, Jerez will now have the chance to do so as a professional, serving clients and working with colleagues as a management consulting associate. He’ll be joining accounting firm RSM in its McLean office in mid-July, applying both the technical and interpersonal skills he developed at the University.

“I will have the opportunity to showcase my talents and drive value,” he said. “That’s important to me because I have spent the past four years learning and practicing. Now I’ll get the chance to perform at another level.”

At UVA, There Is a Club for Everyone END_OF_DOCUMENT_TOKEN_TO_BE_REPLACED